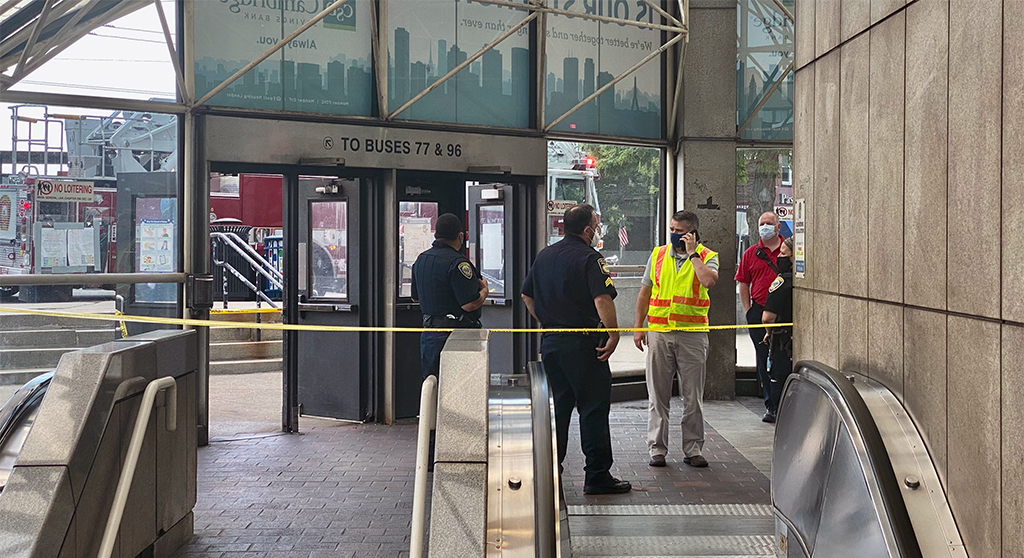 Police gather at the Porter Square T station Friday after a man was hit by a train. (Photo: Marc Levy)

A man died Friday when struck by an inbound red line train at the Porter Square station, transit officials said.

The call came in at around 4:15 p.m. Friday, bringing transit police assigned to the North District as well as Cambridge firefighters, police and ambulances and causing buses to replace train service as authorities cleared the scene. At 7:07 p.m., it was announced that full train service was returning between Alewife and Porter, and replacement buses were being phased out.

The man’s age was unknown, investigators said Friday. Foul play is not suspected, they said.

The Massachusetts Bay Transit Authority made an effort in 2017 to decrease deaths of trespassers on train tracks, which are often suicides. Some two dozen people died on tracks that year – commuter rail tracks were a focus – representing a doubling of such deaths from 2016. “I can’t tell you why there’s been this increase on the railways,” Steve Mongeau, executive director of the suicide-prevention organization Samaritans, told Wicked Local, indicating Massachusetts ranked 15th nationally in pedestrian deaths by train.

Last year, a man died at the Central Square station Sept. 2 when he jumped down and touched the third rail that powers the trains. In 2018, a 66-year-old man died Sept. 9 on the northbound tracks, hit by a train at Porter.

Requests for further information and context went unanswered by Transit Police Supt. Richard Sullivan, who was identified as the only person authorized to speak but whose sole comment was, “Please follow us on Twitter.”