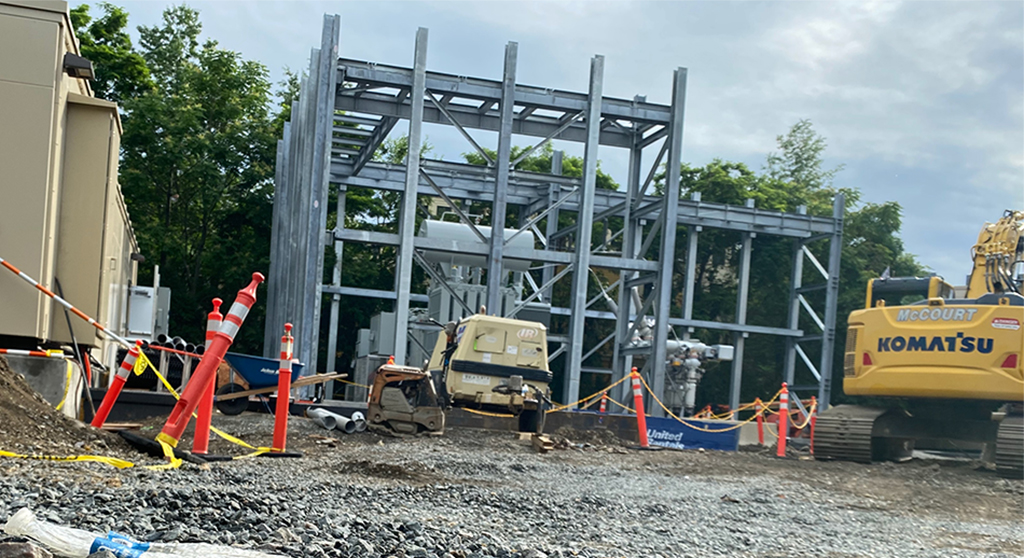 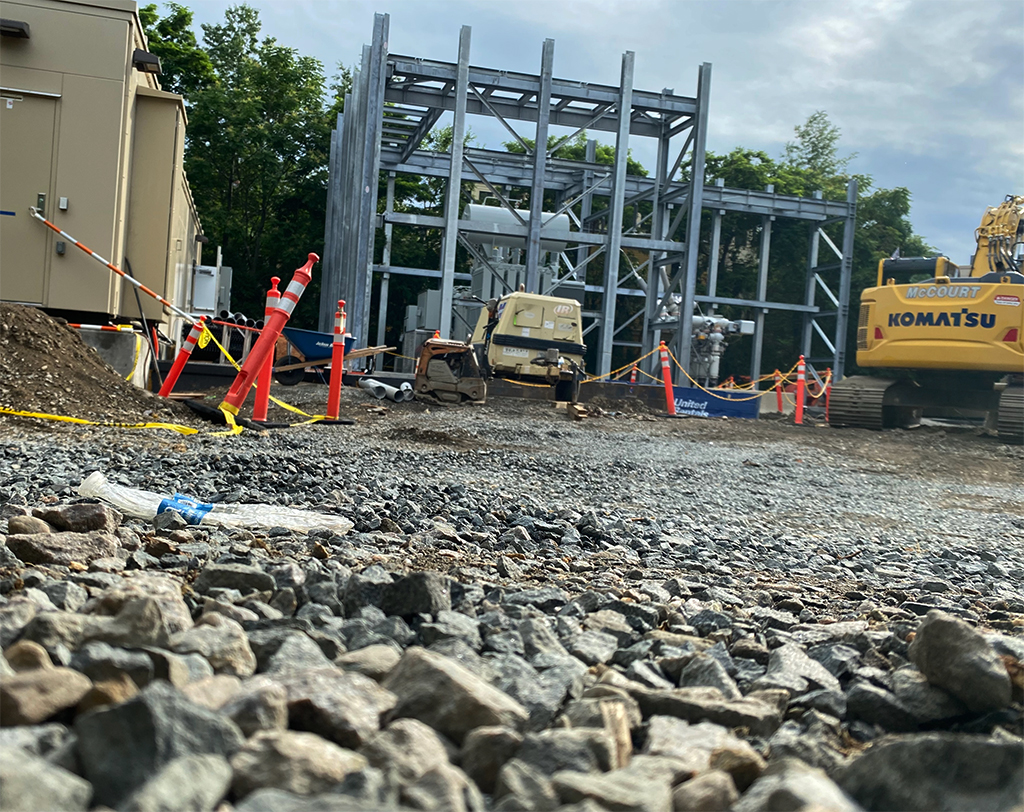 A worker was hospitalized Thursday after a construction incident at Eversource’s Putnam Avenue Substation project in Cambridgeport, where the utility is adding a transformer and other equipment to an existing three transformers. The 377 Putnam Ave. project is expanding into space behind a Pleasant Street condominium complex.

Power went out at 8:17 a.m. in some of those condos, and one resident “reported hearing a loud boom,” neighbor Alysha Hearn reported. Afterward, thick smoke clogged the block, and emergency workers arrived to close off Putnam Avenue before taking the worker away for medical help. A first responder on the site was overheard saying “someone got blown up,” according to the report.  The worker accidentally struck a high voltage power line, police said.

The 40-year-old contractor was “treated, packaged and transported to a Boston area hospital” for electrical burns, according to a city spokesman.

As of late Saturday, the Botti Construction contractor was still being treated for his injuries, and “our thoughts are with him and his family,” Eversource spokesman Reid Lamberty said. Botti is a South Easton company that specializes in underground utilities.

Engineer and Northeastern University professor Peter Desnoyer recalled from community meetings in the early 2000s that a 115-kilovolt line from a Kendall Square power plant runs under Memorial Drive directly to the Putnam Avenue substation – potentially carrying a charge that can power about 150,000 homes. He was present for some of the installation. “When they laid the cable, you could see that the copper conductors were about 3 inches in diameter,” he said. “It’s big.”

Neighbors were rattled by the Thursday incident. One in conversation with Hearn on a neighborhood listserv recalled a March explosion that collapsed access ways and sent their iron covers flying on Boston’s Beacon Hill.

“The worksite is dangerous, and it is deeply concerning that Eversource wasn’t able to provide its employees with a safe work environment,” Hearn wrote. “For those of us who live within arms’ reach of the Eversource lot or walk by it daily, Eversource’s promises to be a trustworthy neighbor offer little solace. This substation does not belong close to homes, across the street from a playground, and next to a sidewalk with heavy foot traffic.” 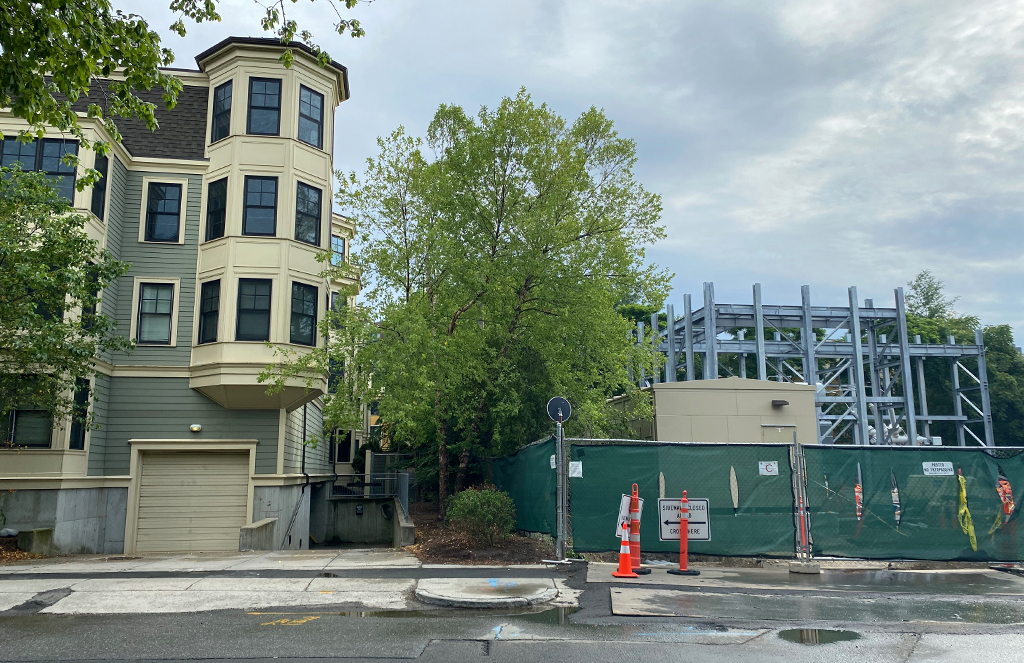 The project’s special permit was requested Sept. 12 and approved by the Board of Zoning Appeal, and a building permit was issued Dec. 26. Eversource called the project “crucial” in providing reliable power in Cambridge after development in Kendall Square began draining the existing supply; the goal was to have the fourth transformer working in time to help meet peak summer load demands and prevent system overloads. “Without the additional capacity at the Putnam Avenue Substation, the existing electrical system could be stressed beyond capacity during the summer cooling season, causing system overloads that could lead to damaged equipment and customer outages,” Eversource said.

The utility was allowed to work through a three-month coronavirus construction shutdown because its work was deemed essential. Equipment installation was to take up the first half of the year and landscaping and fencing improvements the second half.

“We tried to make the same point”

Eversource also wanted an entirely new substation on Fulkerson Street, across from the Kennedy-Longfellow elementary school and near a park in East Cambridge and the Linden Park neighborhood in Wellington-Harrington. Widespread opposition met the proposal in 2019, and an alternative site was put together at Boston Properties’ Blue Garage in Kendall Square – giving Boston Properties some 820,000 square feet of development space in exchange, or a $160 million value. Housing will make up more than half of it, and a quarter of the housing will be below market rate, according to the Cambridge Redevelopment Authority.

“We tried to make the same point” against having a substation in a residential area by a playground, Hearn said Saturday by phone. “I think part of [the difference] was that there was already a substation here … We went to the zoning board. But you could tell the zoning board had already made their decision.”

The existing substation is “already really loud,” and the addition “is already taller than they promised. We’ve had to deal with construction nonstop, and the whole buildings shakes,” Hearn said.

Still, on Saturday night, her thoughts were with the injured worker.