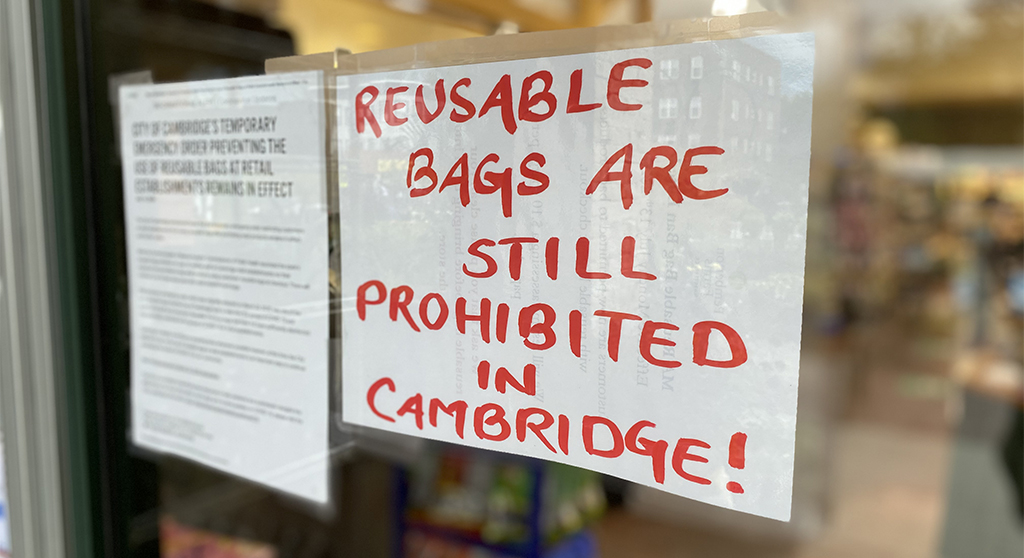 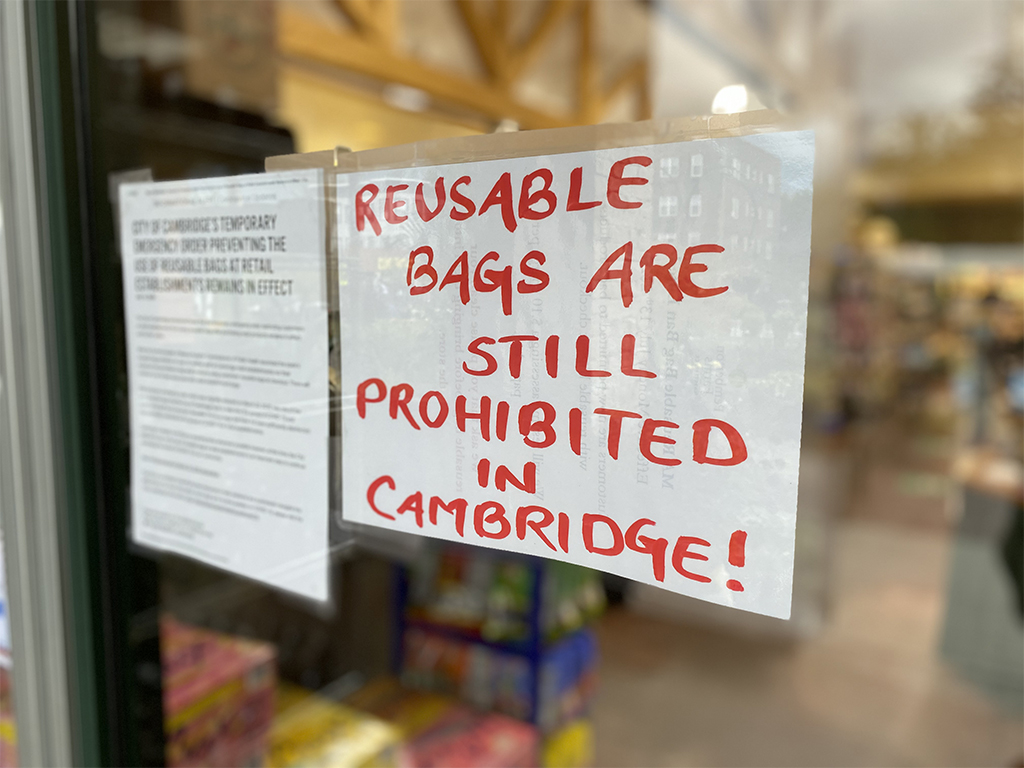 A sign seen Thursday at Pemberton Farms in North Cambridge reflect a ban on reusable bags in place since March 23. (Photo: Marc Levy)

The city’s ban on reusable bags ends Saturday, nearly two weeks after a statewide ban ended, according to a Thursday email from the offices of City Manager Louis A. DePasquale and commissioner of public health Assaad J. Sayah.

Customers will be allowed again to bring reusable bags for use at checkout, though retailers are prohibited from charging the required 10 cents for their own bags until Aug. 10, according to the order. As of Aug. 10, “all provisions of Cambridge’s ‘Bring Your Own Bag’ ordinance will be in effect,” the city’s press release said.

The city “takes deliberate and measured steps to help prevent the spread of Covid-19,” DePasquale said. “We move cautiously in our public health decisions and utilize our Expert Advisory Committee to understand the potential impacts on new or modified public health measures and guidance. The community’s compliance with these measures have made a difference.”

“We will continue to use data and expert advice to inform our strategies to minimize the spread of Covid-19,” DePasquale said.

But how the bags spread the coronavirus wasn’t explained as the ban went into effect March 23, or after Gov. Charlie Baker lifted the statewide order July 10 and Cambridge’s ban stayed in place – to the frustration of some Cambridge residents and state environmental activists. It was also in defiance of the City Council, which passed a resolution June 1 asking for the state ban to end so Cambridge could get get back to using the more environmentally friendly bags.

The issue was even brought up Monday as a council committee discussed extending the city manager’s contract; the bag policy was given as one of several example of DePasquale’s intransigence in the face of council wishes. “[DePasquale] refuses to actually look at data on reusable bags,” resident Kate Haynes said during public comment.

More than three months of study since the start of the coronavirus crisis showed no evidence that bag suspensions “meaningfully protect public health,” said 13 representatives of environmental groups in a July 15 letter to DePasquale’s office, urging a science-based rethinking of the policy. “State governments across the country are lifting suspensions of plastic bag restrictions and reusable bag use.”

The signers included Sue Donaldson, of the Cambridge-Somerville node of 350 Massachusetts; Steven Nutter, of Green Cambridge; Kristine Jelstrup, of Mothers Out Front Cambridge; Janie Katz-Christy, of the Green Streets Initiative; and Janet Domenitz, a Cambridge resident who is executive director of the education fund at the Massachusetts Public Interest Research Group.

DePasquale didn’t reply to the letter – at least, not directly.

“We are thrilled to see Cambridge get back to reducing waste, to reducing plastic pollution and forging a sustainable path forward while we all continue to deal with this pandemic,” Domenitz said by phone Thursday.