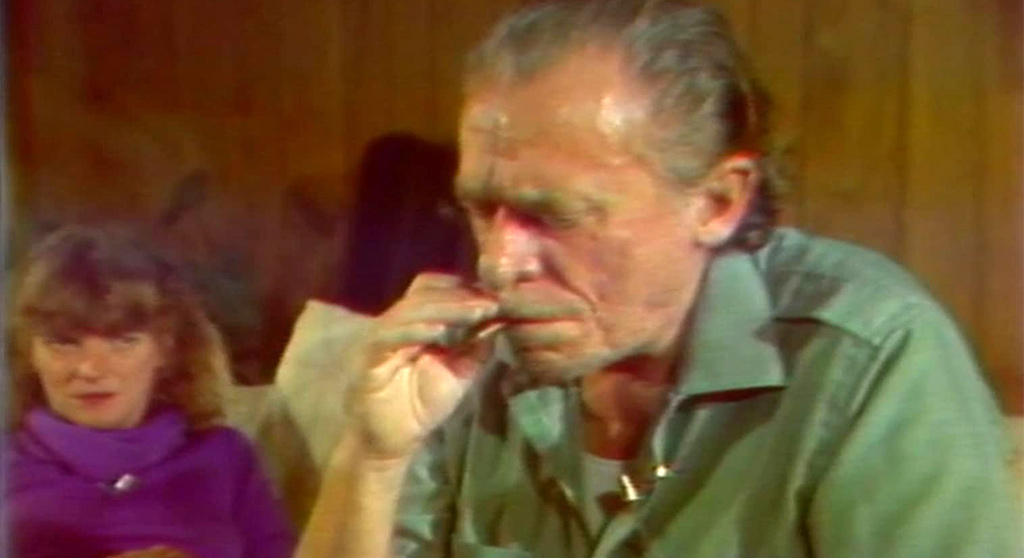 Italian journalist Silvia Bizio digs deep into her archives to pull out a VHS recording of an evening with infamous poet/writer Charles Bukowski in the early 1980s. Buk, pickled up on good wine, gives it straight to the camera about fucking, sex scenes in literature and what he thinks of certain authors, including Lawrence (one of the four greats), Dostoyevsky (another one), Hemingway (grew out of him) and Miller (gives you a few good pages, then loses touch with the streets). The old coot is amiable, charming and introspective. This is certainly for fans (count me as one) and something of a fitting eulogy for the bar in Inman Square named after the author, closed. Part of the Brattle Theatre’s Virtual Screening Room.

“Barfly” (1987), the dark Bukowski bar dramedy stating Mickey Rourke and Faye Dunaway, isn’t available on any streaming platform, but this tale, also revolving around Bukowski’s alter-ego, Hank Chinaski (Matt Dillon), recounts the travails of a struggling writer who takes part-time jobs to pay the bills (thus the title of the film, and what Bukowski did). Of course, women, booze and bar brawls factor in. It’s not “Barfly,” but it’ll do. Cheers.

Amy Seimetz’s art-house psycho-drama is all about dread, fear and contagion, making it a perfect movie to reflect our very imperfect times. We begin with Amy (Kate Lyn Sheil) who, full of malaise and blowing leaves from her room in a sequin gown, tells her friend Jane (indie fixture Jane Adams) she’s going to die tomorrow. Then Jane has the same feeling and passes it on to her doctor (Josh Lucas), and so on. The bigger what and why never really comes to the fore, but Seimetz creates an eerie, cerebral immersion with a micro focus on the individual dramas of those afflicted. The cast of indie regulars includes Chris Messina, mumblegore director Adam Wingard and an an ageless Michelle Rodriguez.

The film that put Rodriguez on the radar as a NYC boxer who gets in the ring against the boys, unbeknownst to her father (Paul Calderon). Her Diana Guzman has skills and grit and rises in rank – check your egos, guys – and ultimately has to square off against her love interest (Santiago Douglas). Definitely a glass ceiling breaker, and a fiery breakout performance by Rodriguez, who would go onto score a sizable role in the “Fast and the Furious” franchise. Also the directorial debut for Karyn Kusama, who would go on to direct “Æon Flux” (2005), “The Invitation” (2015) and “Destroyer” (2018).

The terrible explosion that rocked Beirut last week was a reminder of the county’s long, fractious and often tragic history. This animated documentary by Ari Folman recounts his time as part of an Israeli military detachment that made its way into Lebanon during a 1980s incursion. The somber reflection of war and renderings of absurd happenings along the way convey the horrors of war hauntingly. The composition, pace and tenor is nothing short of brilliant.

Folman’s follow-up takes its cue from the Stanislaw Lem novel “The Futurological Congress.” A piquant olio of live action and animation that chronicles an aging actress (Robin Wright, playing a version of herself) being turning into an ageless avatar product that will live on forever. The crossover into animation is akin to “Who Framed Roger Rabbit” (1988) and “Heavy Metal” (2000) and every bit as gloriously gonzo. (Read the full review from Sept. 5, 2014.)

Pretty much a fictional capture of the early days of The Boston Phoenix/Real Paper, where screenwriter Fred Barron toiled. The DIY/low-rent/party-time spirit is pretty akin to what Scott Crawford depicts in his rock doc “Creem: America’s Only Rock ’n’ Roll Magazine,” now playing as part of the Brattle Theatre’s Virtual screening room, and apt, too: “Lines” was out of circulation for some years, and the Brattle was front of the line to screen it last year when it was rereleased. The cast of alt-weekly journos include John Heard, Jeff Goldblum, Bruno Kirby and Lindsay Crouse. It’ll make you miss the storied Phoenix that much more.

Director Cameron Crowe’s autobiographical account of being a young reporter for “Rolling Stone” and getting swept up in the rock ’n’ roll lifestyle. Patrick Fugit plays the Crowe part, with Kate Hudson as a free-spirited groupie/love interest crush and Billy Crudup as the aloof rock star Fugit is tailing. Romance, rock and heartbreak ensue. The incredible cast also includes Philip Seymour Hoffman as Creem’s Lester Bangs, Frances McDormand, Anna Paquin, Zooey Deschanel and Jimmy Fallon. Crowe would pick up an Oscar for his screenplay and Hudson and McDormand received acting nods. Crowe appears in the rock doc “Creem: America’s Only Rock ’n’ Roll Magazine,” which features the real Bangs.

Kathryn Bigelow’s film is an immersion into true events, a night of chaos within the race riots that rocked the title city in 1967 (and a touchpoint in the rock doc “Creem: America’s Only Rock ’n’ Roll Magazine”). “Detroit” was underappreciated when it came out. In light of George Floyd’s murder and the wave of social justice protests sweeping the nation, it’s more than worthy of a revisit – but be advised, it’s a tough watch that depicts extreme cases of police brutality and the psychological mindset employed. I remember some fellow critics at the time dismissing it as too graphic, even torture porn, but now the light has been cast differently, and the film is chilling at times but also enlightening. Parts of the film were shot in Massachusetts. (Read the full review from Aug. 3, 2017.)

Steve Ellmore’s earnest documentary follows the lives of several Middle East war veterans and their hard reentries into society. Most have been shot up or worse, all have PTSD and all are hooked on prescribed meds. The film’s thesis is that getting off drugs and coming down slowly and safely on medical marijuana is the way. Sure, you say, but medical marijuana is legal. Kind of; a vet using marijuana can be held in legal violation and lose their military medical benefits – the rub that propels the doc. Some of the on-the-spot war footage is incredible, as are the individual tales of descent and recovery.