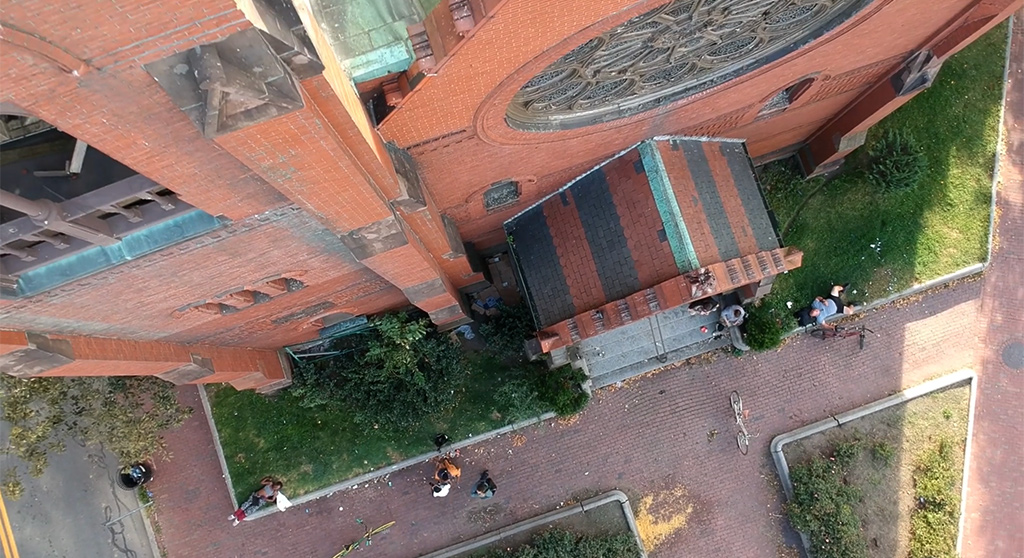 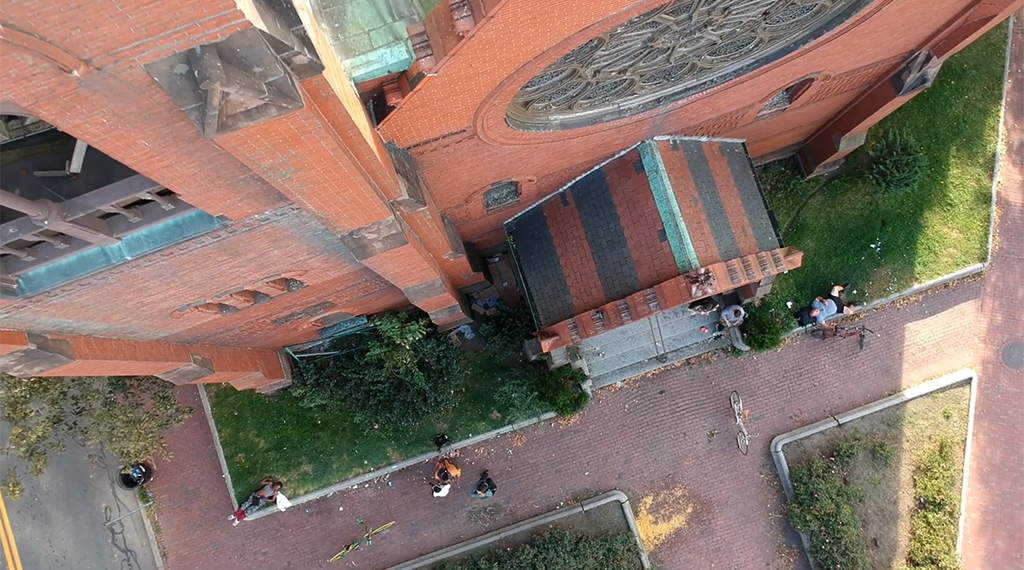 Leaders at the new Central Square Church said they plan to spend as much as $7 million on renovations at Central Square’s First Baptist Church of Cambridge, seen in a church video.

The choice of a construction manager means renovations can begin on Central Square’s First Baptist Church of Cambridge, a landmark structure standing at River and Magazine streets since 1881 and now officially home to a new organization called Central Square Church. Leaders at the new church said they plan to spend as much as $7 million on the work.

Central Square Church, formed in July out of the congregation based in the historic building and its neighbor down the street, Cambridge Community Fellowship Church, said it had already raised $3.5 million as of Dec. 10 from 160 of their combined households and former members around the world, according to a statement online.

“The total raised to date is significantly more than what we needed to get into the building to do basic renovations, and halfway to our dream goal,” church leaders said. 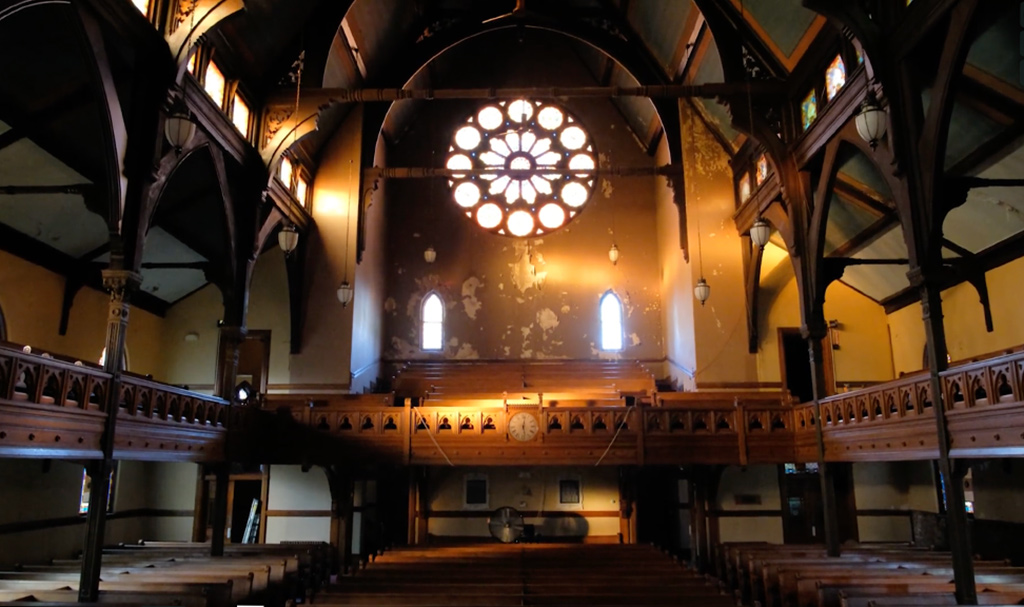 Inside the 1881 structure, from the same church video.

The construction manager, the University Park-based Siena, said it would be working with Wessling Architects of Quincy on finish restorations, modifications, restrooms and accessibility upgrades inside as well as restoration of the gabled slate roof, wood windows and doors and the brick masonry façade, including sandstone trim and terra cotta detailing.

The renovations were needed, and the merger of congregations was needed to accomplish them.

Sunday services and other building activities ended in the winter of 2018-2019 after pipes burst and the building’s water had to be shut off, freezing out what First Baptist pastor Henry Johnson called a “handful” of parishioners and sending them to Cambridge Community Fellowship Church, itself sharing space with three other congregations in a smaller, white-paneled building at 234 Franklin St. The historic church hadn’t been maintained properly since a 1975 architectural refresh and was in need of an “extreme makeover,” Johnson said last summer.

Merging gives First Baptist a new lease on life, and Cambridge Community Fellowship Church the room it needed to be comfortable and safe.

“The year before I met pastor Johnson, we had had an Easter service where we violated every fire code – we had chairs stacked in front of the doorways,” said Larry Kim, who was senior pastor at Cambridge Community Fellowship Church.

While First Baptist had an older, African American congregation, CCFC’s membership was majority Asian American, mostly college students and young families. It was founded in 1996, while First Baptist dated back to 1817 and thrived for many decades – certainly in 1960, when the Rev. Martin Luther King Jr. came to town and more than 2,000 people overflowed the hall to hear him speak. 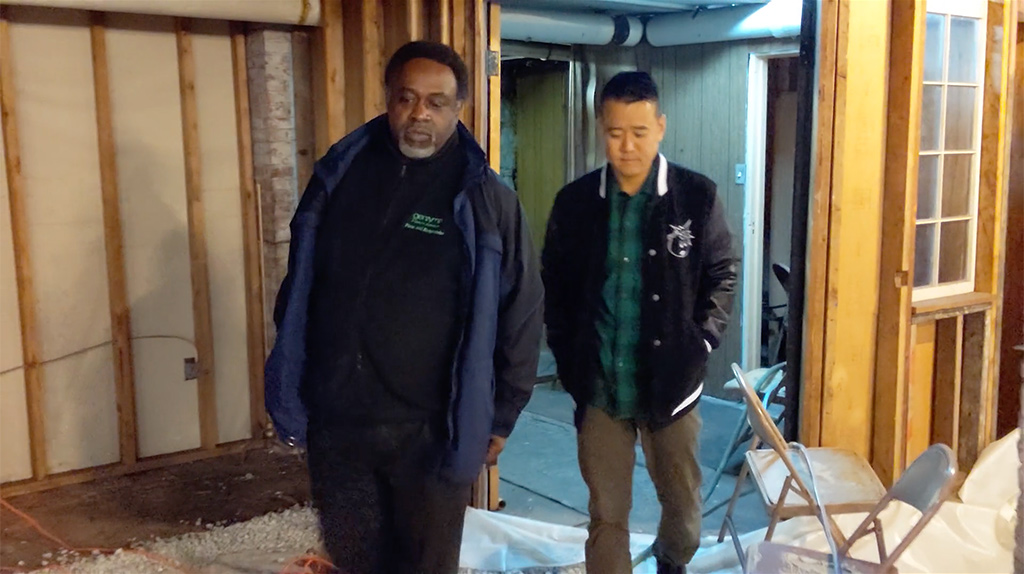 In July 2019, leaders of both churches were still feeling their way to a merger. It took until Juneteenth this year for them to announce the formation of Central Square Church, after years of contemplation despite a relationship that dates back more than 10 years and included partnering on an October Harvest Festival and other events.

“God has been moving us and bringing us together,” Kim said in a Central Square Church introductory video.

Church leaders were open-eyed about the difficulties of merging churches, given the differences in demographics and evangelical denominations. “We cannot pretend that there isn’t some weird stuff between different races who are sitting next to each other in that church,” said Leslie Moore, who held the position of traction network coordinator at Cambridge Community Fellowship Church.

Still, she said in the video, “It’s so unlikely that a church with black leadership goes to a church with Asian leadership, largely, and says, Hey, can we connect? I think we should do things together.”

Church leaders said they felt the full $7 million goal was achievable through supporters in its networks, “interested parties in Central Square … and historical building renovation funds.”

Michael Monestime, executive director of the Central Square Business Improvement District, conscious of the struggles at River and Magazine streets for some time, reacted Friday to news of Siena’s hiring and the impending renovations, calling it the “Miracle in Central.”