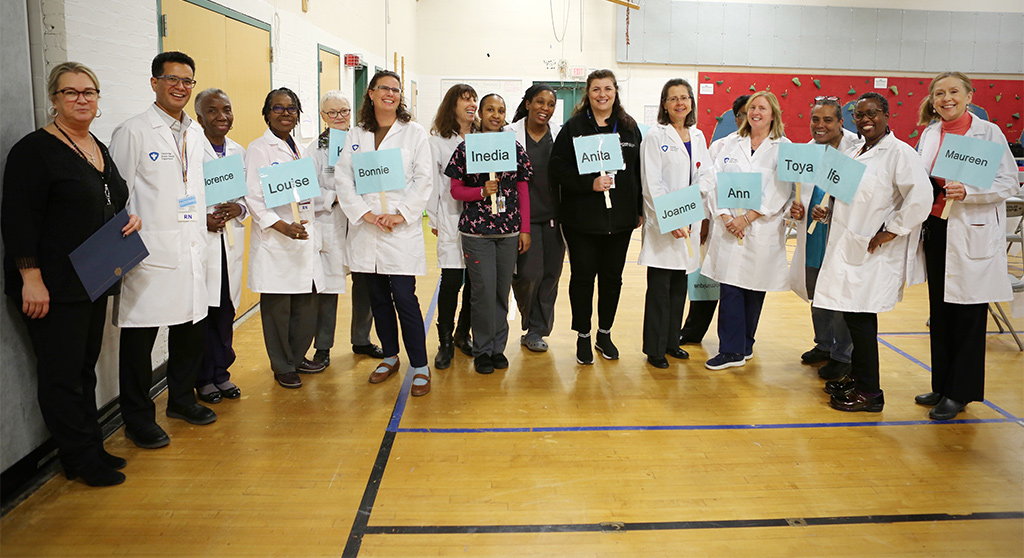 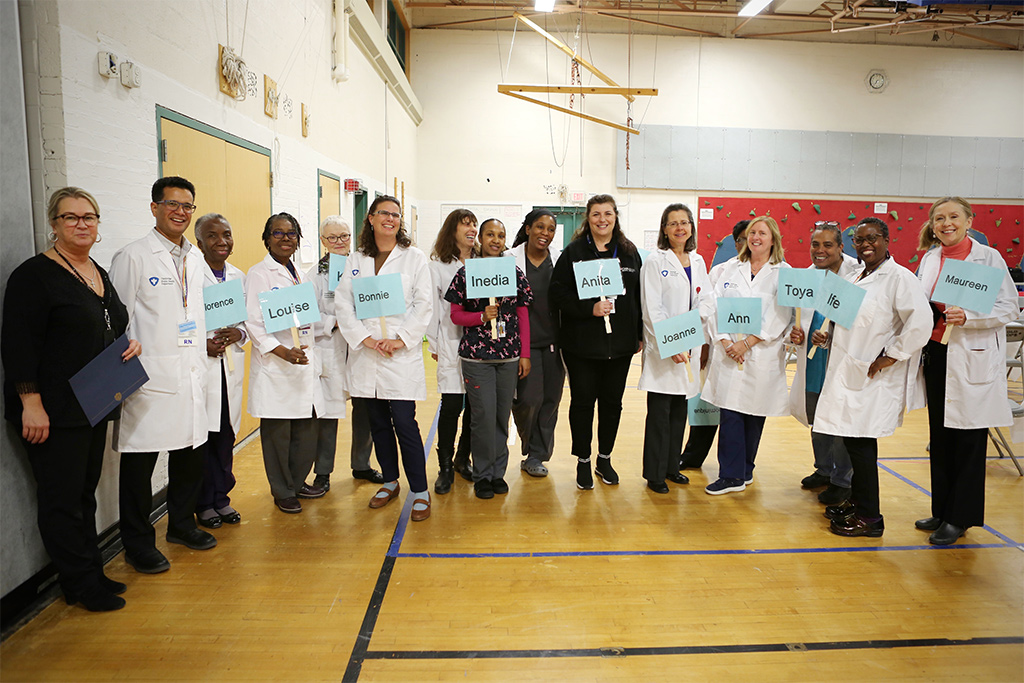 Nurses shown at a 2019 flu vaccination clinic were described in a city publication as “The Community Tracing Collaborative” in an article about Covid-19 contact tracing. (Photo: City of Cambridge)

Cambridge says its public health department has done a superb job reaching people with Covid-19 and their contacts since the pandemic began and urging them to isolate or quarantine, an effort that health experts consider vital in reducing spread of the virus. The city has presented little evidence for its claim.

Until last week, the city didn’t disclose any measures of its success with case investigation and contact tracing. Then a post on the Covid-19 daily updates web page on Aug. 30, and later an article in The Cambridge Life, a city government publication, provided a few approximate numbers. Cambridge Public Health Department staff and retired public health nurses, plus workers in the state’s contact tracing program, had “reached out” to more than 1,200 Cambridge residents with positive test results (as of Thursday the case count in Cambridge was 1,296). “About” 75 percent of the cases were assigned to city staff and 25 percent to the state tracers, the post said. It didn’t say how many were actually reached.

The city workers identified about 470 contacts of their cases; the state team, about 250. Those numbers were only for contacts who were Cambridge residents, though, making it impossible to determine the real success in identifying contacts; it’s likely there were more. And the article didn’t say how many contacts were reached. Cases are people with a positive Covid-19 test; contacts are people who spent at least 15 minutes within 6 feet starting a few days before the infected person had symptoms or received the test result.

Also left unreported were performance measures recommended by public health organizations such as how long it took to reach cases and their contacts, how many cases provided the names of contacts, the average number of contacts identified for each case, and the outcome – how many people did take the recommendations to isolate or quarantine. The post quoted the interim head of the health department’s public health nurses as saying “the vast majority” of those who were contacted cooperated, but gave no numbers.

A photo with the post had no caption online and shows a group of people, most with white coats, standing indoors close together, none wearing masks. Susan Feinberg, spokeswoman for the Cambridge Public Health Department, said the photo was of public health and school nurses at a 2019 flu vaccination clinic and that leaving out a caption was an “oversight.” She didn’t explain why the city chose an image of maskless people indoors and not socially distancing to illustrate an article about preventing the spread of Covid-19 – and in the printed magazine, the gathered nurses were identified as “The Community Tracing Collaborative.”

The city’s article and post, headlined “Cambridge’s Disease Detectives Aim to Break the Chain of Covid-19 Transmission,” was published a month after Cambridge Day submitted 10 questions to the city’s health department seeking specific information on the contact tracing program’s performance. There was no response as of Thursday, although one is promised and this story will be updated if it’s received. The department has not even disclosed how many public health nurses it has on its staff. 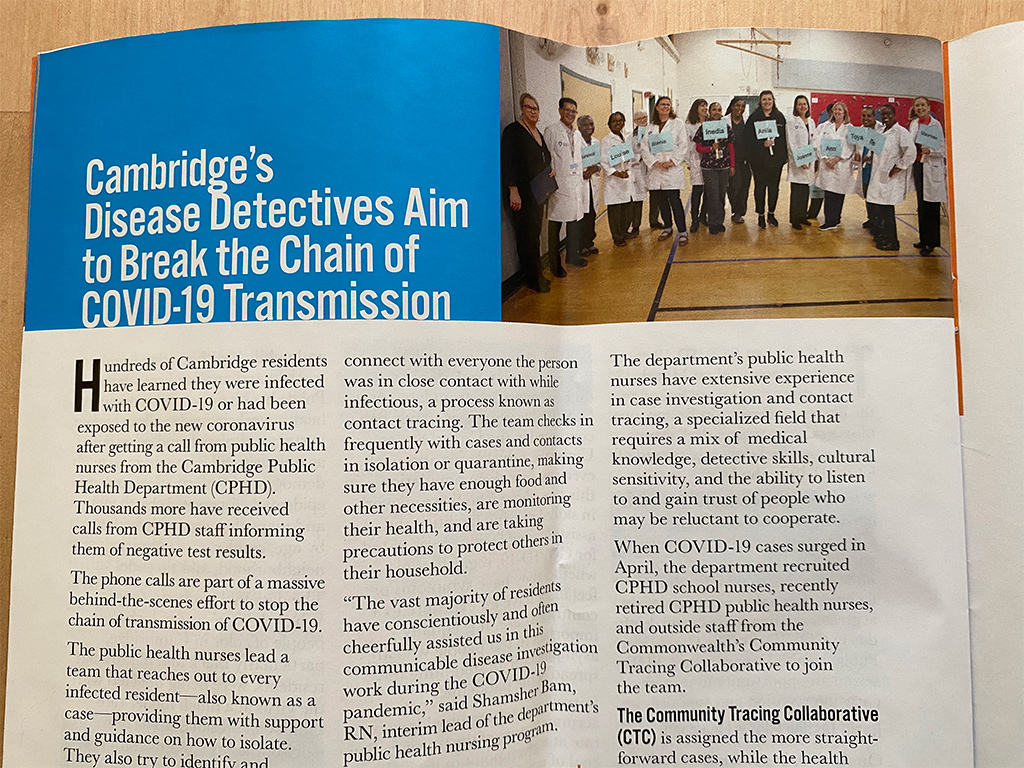 The city’s article as it appears in the fall issue of The Cambridge Life. (Photo: Marc Levy)

Recommendations for measuring the success of case investigation and contact tracing have been published by several respected public health organizations, including the U.S. Centers for Disease Control and Prevention. The CDC urges public health agencies to keep track of how many cases are interviewed within 24 hours, the number and percentage who named at least one contact, and the percentage of those advised to isolate or quarantine who complied, among other measures. Agencies should measure performance during two-week periods, it says.

Resolve to Save Lives, a global initiative fighting heart disease and epidemics and supported by the Bill and Melinda Gates Foundation, Bloomberg Philanthropies and other foundations, recommends that agencies create a dashboard to keep track of performance measures along with demographic and neighborhood information about cases and their outcomes. Public health agencies should also establish performance targets “to guide adjustments to policies and protocols,” the organization says in its Covid-19 Contact Tracing Playbook.

Most states and communities do not report information on contact tracing. However, Los Angeles posts a detailed daily dashboard that includes measures such as the number and percentage of cases and contacts who were called within one day of assignment and how many completed an interview. The dashboard provides cumulative figures as well as numbers for the previous seven days.

New Jersey also publishes weekly figures that report what percentage of cases refused to provide contact information, among other measures. The New Jersey dashboard includes figures on the number of contact tracers in each county, while Massachusetts posts the total statewide.

The CDC also recommends “programmatic” measures of the success of contact tracing such as how many contacts were tested for Covid-19 and how many new cases of the virus are linked to quarantined contacts.

Cambridge may be following all these recommendations, but officials haven’t provided any more information than the approximate numbers of infected people and their contacts who live in Cambridge and for whom there was outreach.

The state Department of Public Health began publishing weekly contact tracing information last month covering the period since the state’s contact tracing program began operating April 10. It includes cumulative figures on the number and percentage of cases and contacts where outreach was “completed,” plus some outcome measures such as the percentage of cases and contacts who completed isolation or quarantine.

Contact tracing capability is one of the measures the state examines to make reopening decisions. Last month the health department changed its evaluation of contact tracing from yellow or “in progress” to green or “positive trend.” The department didn’t answer when asked what figure triggers a change.