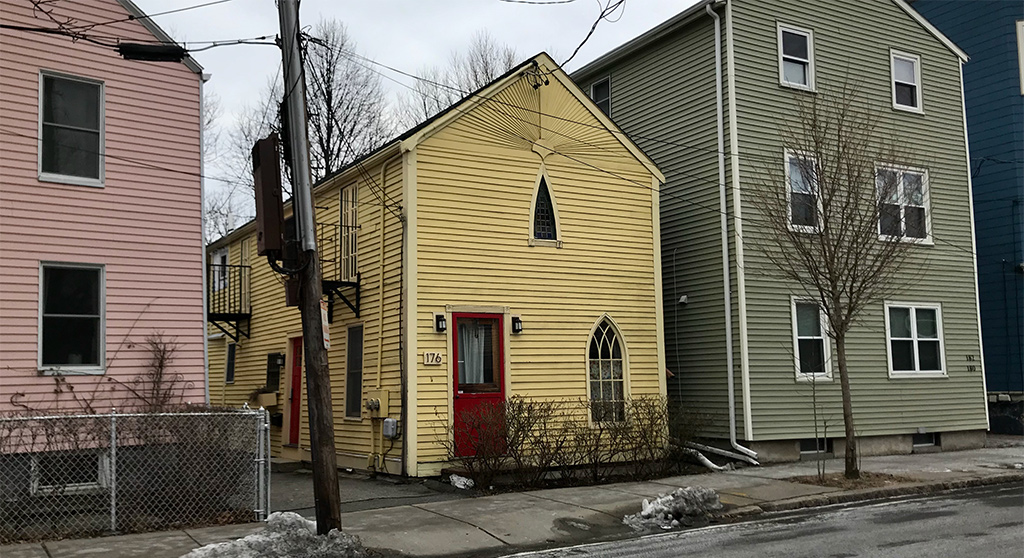 A quirky home on a row of colorful structures on Third Street, East Cambridge, seen in February 2019. (Photo: Marc Levy)

The City Council will consider an order Monday addressing Cambridge Neighborhood Conservation Districts and their possible impacts on property values. This order is based largely on a Sept. 10 Cambridge Chronicle op-ed, itself a reprise of a Feb. 27 blog post by a local political activist, claiming “Conservation Districts Make Housing Less Affordable.” An objective real estate data review reveals not only that Cambridge neighborhood conservation districts have not increased property values or rents, but also that, on average, increases are consistently lower than those outside the districts. In analyzing Cambridge data and the studies this blogger cites, alongside others, the presented conclusions are readily debunked.

Councillors should not oppose neighborhood preservation efforts, particularly through efforts whose premises are so obviously flawed and tendentious.

Councillors’ own experiences can offer a useful lens through which to view these patterns. Those in conservation districts have seen more moderate rent and property value increases than those in unprotected areas of the city. Redfin data from 2015 to today shows that, on average, councillors in or next to conservation districts show a stunning 9.5 percent lower average housing value increase than councillors elsewhere, for an average 36 property value increase compared with 45.5 percent. Cambridge renter data confirm these conclusions.

This essay is excerpted from a longer open letter to the City Council with more detail and data:

What drives up costs, if not conservation districts? In East Cambridge, where increases have been the most dramatic, what appears to matter is its proximity to Kendall Square biotech developments. And most renovation costs are driven up through the updating of kitchens and bathrooms, not through work on the exterior – and conservation district guidelines address only facades visible from a public way and would not be a factor unless one wished to make a change. Moreover, exceptions are made for financial burden, and decisions can be appealed.

The blogger who claims “conservation districts make housing less affordable” cites 12 preservation studies, but closer examination on all show the opposite of what he asserts. For example:

The New York City study on historic districts finds “no change in reported rents and little evidence of racial turnover in neighborhoods.”

The Nashville, Tennessee, study on historic districts concludes there is “not sufficient evidence to conclude that districting itself causes higher prices or greater price appreciation.” Nationally, the same study notes that historic designation may have either neutral or beneficial impacts on property values, depending on contexts.

In Connecticut, historic districts least affected by increased values are those “where there are significant commercial and multifamily structures,” a finding that complements East Cambridge.

The Tucson, Arizona, study says historic districts “insulate property values from wild swings in the housing market, including downturns and ‘bubbles’ caused by real estate speculation.” Also “neighborhoods with stable values do not offer opportunities for ‘flipping’ … historic district designation reduces the uncertainty facing the buyer regarding the future value of the investment.”

Going still further afield, a 2012 study focused on conservation districts across Great Britain concludes in the same way, concluding that district designation “does not exhibit a statistically significant impact on property prices inside a conservation area when comparing the trend to carefully selected properties outside the newly designated areas.”And, whereas in the short term “designation has a neutral effect on property price,” in the longer term one sees “the even broader potential benefits to potential visitors, future generations and those who value heritage.” We could add other broad-based studies showing the critical environmental importance of building reuse and preservation, noting the carbon equivalencies for existing building reuse versus new construction.

Why the blog ignores the data and summary conclusions (or misrepresents the findings) to create a counter-narrative is not clear. What we do know is that the debate about neighborhood conservation districts is intended to be a distraction: Focusing on the possibility of increased renovation costs for homeowners diverts attention from commercial development projects.

How could the blogger’s “study” have been so wrong? Part of the issue may be lack of expertise in the fields of preservation, planning and economics, but it may also reflect a willingness to bend the facts to fit a political agenda aimed at promoting increased commercial development in East Cambridge under the false flag of renter cost concerns. In short, there are underlying motives behind the false assumption that commercial development is inconsistent with a neighborhood conservation district.

As one opponent of the conservation district study noted on a neighborhood email list:

“East Cambridge’s land represents opportunity … because of its location, your neighborhood should not be able to continue to exist as is … East Cambridge [has been described] ‘as a once-peaceful backwater.’ I understand why people like it that way. Who wouldn’t like to live in a quiet charming town … But I think more people should have those same opportunities. That means East Cambridge has to change.”

East Cambridge has always changed. With a shoreline on the Charles and quick access to Boston, it was and is the cash cow for Cambridge and a major industrial engine in the region – and although much of the industrial infrastructure has been lost, much of the architectural fabric has been preserved. We should not now destroy the homes of current residents and sacrifice the interests of future generations simply because this part of the city represents “opportunities” for someone else.

It would also go against the stated goals of Envision Cambridge, of “preserving existing patterns of development and encouraging the preservation and reuse of existing structures where they are economically viable … retaining their existing fabric while allowing for complementary infill development.”

Does requiring the city to do an impact study for potential conservation districts mean the city should be required to do similar studies (economic, environmental, traffic and other) for large commercial developments and housing projects, including projects for the recent Affordable Housing Overlay upzoning? Consistency is important.

Councillors should recognize the attempt to mislead here and vote to allow the East Cambridge Neighborhood Conservation study to proceed as planned, without obstruction. Councillors will be able to vote again once the study is complete and a determination sought.

Do conservation districts in Cambridge increase property values? No.

Do conservation districts in Cambridge increase rents? No.

How about elsewhere in the United States and United Kingdom? No.

Overall everyone’s housing prices go up because of proximity to large developments and commercial areas, as well as people moving here with out-of-scale salaries, willing to pay higher prices.

Flawed and downright deceptive arguments should not be the basis for city policy under any circumstances, and certainly should not be allowed to chip away at policies that have protected our civic fabric and made the city a more humane place for generations.

Suzanne Preston Blier is Clowes professor of fine arts and of African and African American Studies at Harvard University and president of the Harvard Square Neighborhood Association.