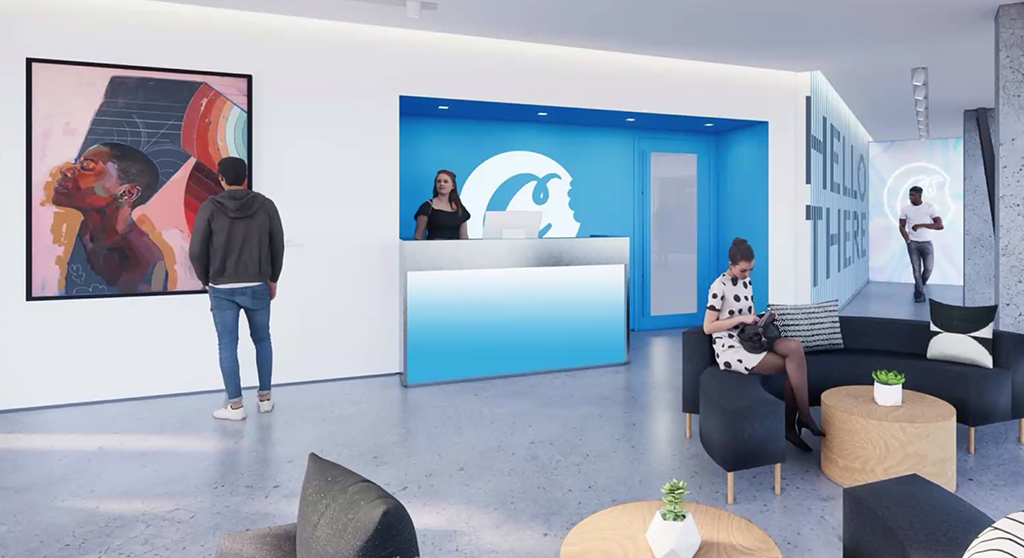 Renderings of a Cookies shop proposed for Harvard Square suggest no product, names or ads would be seen from a neighboring park.

An organization for racial equity in the cannabis industry has called opposition to a proposed Harvard Square pot shop racist, drawing a response Tuesday expressing regret and saying the opposition is solely about having marijuana sold prominently across from a park.

The debate was sparked at a meeting in late August, when a group of business people introduced their proposal for a franchise of the cannabis chain Cookies, which has a lease for the 2,539-square-foot ground-floor space that was once a Staples in the Crimson Galeria. Suzanne Preston Blier of the Harvard Square Neighborhood Association said the group opposed Cookies because of the “billboard” for pot it would present to the park, even for a “product nearly all of us support to be legal.” The playful names of Cookies’ product might appeal to kids, opponents said, though the glass front of Cookies as proposed would show only a waiting room, and no products or ads.

“The two key issues are the issue of the children and of this particular plan. I mean, we would love – and we tried to get it in [a zoning] petition – for this to be at a different place. Even your Central Square place, where the affiliated one would be, is far better,” said Blier at the Aug. 27 meeting, referring to the proponent’s other proposed location. “In our view, there are lots of basements, including one in this building and in other places. Or on the second floor. Or [have] a narrow entry with something that opens up larger. But from the vantage point of this as a kind of billboard for this particular product, I think it makes it incredibly tough.”

Blier added, “we want you to find a place in Harvard Square, something that isn’t so directly connected with the park, on the ground floor level. And, you know, my hope is that you will be able to work with some of the other property owners whether it’s through the business association or otherwise to find a site that that will work for you.”

Harvard Square Neighborhood Association members have “launched a series of misleading and what many consider racist attacks in an effort to segregate [business co-owner Damond] Hughes’ store away from and in a less ‘visible’ location compared to the other predominantly white-owned and operated stores in the square,” the press release says. It goes on to quote Richard Harding, identified as founder of Real Action for Cannabis Equity: “The assertion that a legitimate, black-owned business is only worthy of ‘basement accommodations’ in the exclusive and iconic Harvard Square reeks of the privilege and racism that is prevalent in the emerging cannabis industry.”

“It is unfortunate, yet not surprising, that professor Blier’s comments reawaken old sentiments and validate fresh fears of the racism that is toxic in America today. I am hopeful that her Jim Crow mindset and commentary do not represent the sentiments or character of the good people of Harvard Square,” Harding is quoted as saying.

It was a long slog to get recreational cannabis permitting passed in Cambridge since voters statewide approved it in November 2016. Election results showed pot stores were welcome in Cambridge, but the city still approached licensing gingerly when it came to first medicinal marijuana and then recreational. For recreational sales, a Cannabis Business Permitting law was voted in 7-2 by city councillors in September 2019 with a two-year exclusivity period for economic empowerment applicants based on the disproportionate damage to people of color during the so-called war on drugs.

The debate got heated when councillor E. Denise Simmons opposed the head start in favor of letting medicinal marijuana dispensaries sell adult-use cannabis immediately. A flyer from Harding’s organization referred to the amendment from Simmons – who is black – as “the anti-equity ‘slave amendment’ [that] would force minority businesses into a dependent, indentured and second-class relationship with out-of-state corporate interests.”

The business and neighborhood associations and park trust referring to the comments about Simmons in its letter this week: “The tone and substance of Cookies’ Oct. 22 letter and the press release that accompanies that letter … are disturbingly familiar.”

“It is worth pointing out that the Cookies’ letter labels the signatories throughout as ‘the Economic Empowerment Opponents.’ This language is intended to mislead,” the groups said in their reply. The letter notes that members of the group supported the application of Charles River Remedies, an economic empowerment cannabis store in a former Starbucks at 31 Church St., a roughly four-minute walk north. “While Charles River Remedies will be in a prominent Harvard Square location, [it] does not abut a family park.”

Time is running out

A combination of bureaucracy, caution and coronavirus has kept even a single recreational marijuana shop from opening. With the city’s head start ending Sept. 23, there is now less than a year to go on the two-year period, with no public movement on an extension.

Alternative locations around Harvard Square were discussed with Cookies starting in July, the groups said.

“At no point during any of these discussions was there any intent to discredit, demean or diminish this or any other minority-owned business. If that is how our actions have been perceived, then that is deserving of an apology,” the groups’ letter said. “We apologize.”

Here is the press release from Real Action for Cannabis Equity:

And the response letter: