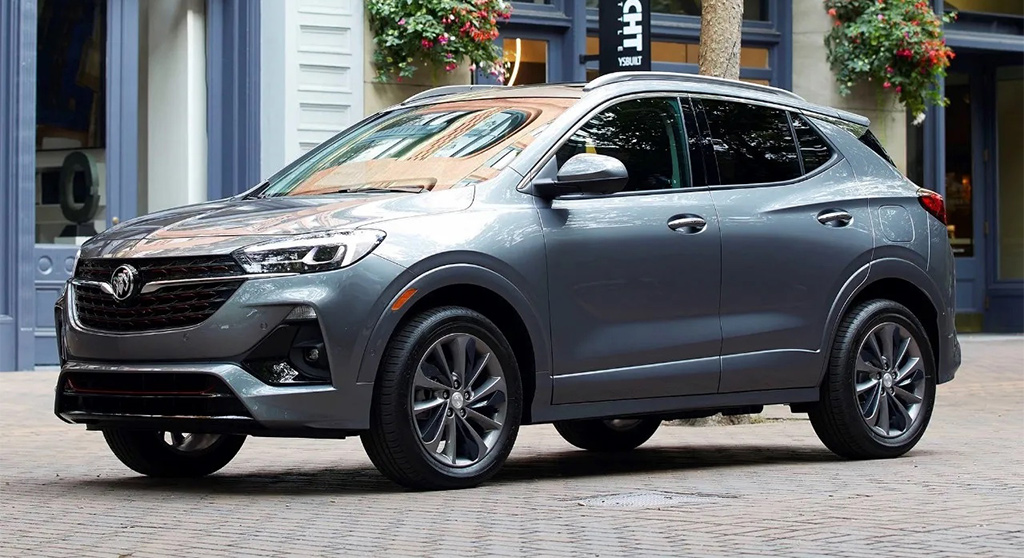 I recently tested the Encore GX Sport touring edition with all-wheel drive and an upscale Essence trim line ($30,500 MSRP plus a $995 destination fee, for a total of $31,495).

On the outside, my gray test Encore GX looked like a spiffed-up version of a CR-V or RAV-4. A small black-and-red grille with a Buick badge swept back to a small hood and modest-sized doors with large folding mirrors.

My model also came standard with roof rails for carrying bikes, skis, etc. All the way back, my test Encore GX featured a modest-sized power liftgate with a rear windshield wiper.

And as a nice upscale touch, my test Encore GX projected a small Buick logo on the ground in lights when I approached the model at night.

My test Encore GX projected a Buick logo on the ground in lights when you approached it at night with your key fob in hand. (Photo: Jerry Kronenberg)

My test model’s dashboard featured a traditional analog speedometer and tachometer, along with a great heads-up display to show you speed and compass direction without taking your eyes off of the road.

My test model came with a heads-up display to let you view your speed and other information without taking your eyes off of the road. (Photo: Jerry Kronenberg)

The steering wheel has built-in convenience controls for cruise control, audio and some other functions and includes a voice-activated control button powered by Alexa. The Alexa system worked well enough, actually turning on the radio when I said. “Turn on SiriusXM.” Not all cars’ voice-activated systems work nearly that well.

The Encore GX’s touchscreen system includes multiple features far beyond audio, such as the ability to schedule service online.

You can even tap into Reese Witherspoon’s audiobook club.

The vehicle also had some 20 old-style buttons and knobs to control the radio and climate system manually. My test Buick also came with a wireless phone charger and General Motors’ OnStar SOS system for summoning help in an emergency.

In back, the Encore GX offers fairly comfortable rear seats that offer good headroom, fairly good legroom and decent hip room. These seats can theoretically accommodate three people, although that would probably work only with kids for all but short city trips.

Two adults could reasonably ride in the Encore GX’s rear seats for fairly long intercity trips (although it’d be a bit tight after a while). When there’s no third passenger, the back seats come with a handle fold-down armrest with two cupholders. Another plus. The Essence line includes a household-style electrical outlet.

All the way back, the Encore GX offers pretty good cargo space – enough for one or two large suitcases and maybe two knapsacks if the rear seats are in use.

If they aren’t, the back seats easily fold flat to create a pretty impressive cargo bay for such a small vehicle, with more than enough room for maybe six large suitcases, some skis or even a medium-sized dresser. My test model’s front passenger seat also folded flat for even more cargo space.

On the road, my test car’s all-wheel drive, nine-speed automatic transmission and 155-horsepower three-cylinder turbo engine combined to produce a good ride. The small CUV offers something of a “high-up” road view, with good front sightlines and fairly good rear and rear side sightlines (although the rear windshield and rear side windows could be a tad bigger).

Braking and cornering were good, and backing up and parking the Encore GX is pretty easy given its modest side. My test model also came with blindspot indicators, adaptive cruise control and other safety features.

The U.S. Environmental Protection Agency rates the Encore GX Sport Touring edition with AWD at 26 mpg/city and 29 mpg/highway. During a weeklong test drive, I logged 32.2 mpg in combined city/highway driving.

My top-of-the-line Encore GX model’s $30,500 runs on the high side compared with larger but less luxurious CUVs such as the $25,050 Honda CR-V. But the Encore GX’s $24,100 base price (for the Select trim line) runs less than other upscale small CUVs such as the $28,400 base Mini Countryman.

And given that a 2021 Encore GX with minor upgrades is already out, General Motors is offering $3,500 in rebates on 2020 versions, bringing even the high-end Essence Sport Touring Edition’s sticker price down to $27,995. For budget-conscious shoppers, the rebate takes a base Select Encore GX’s MSRP down to $20,600.