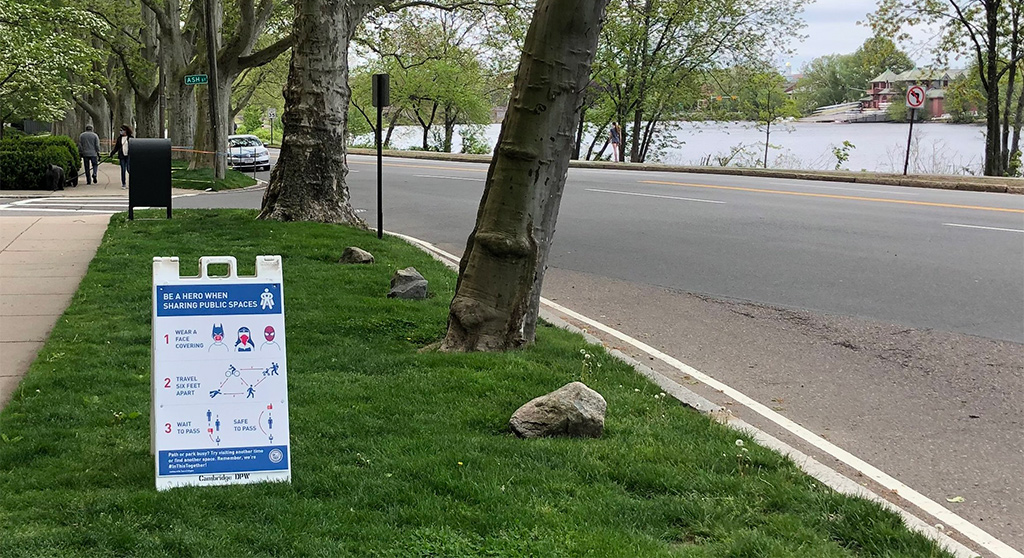 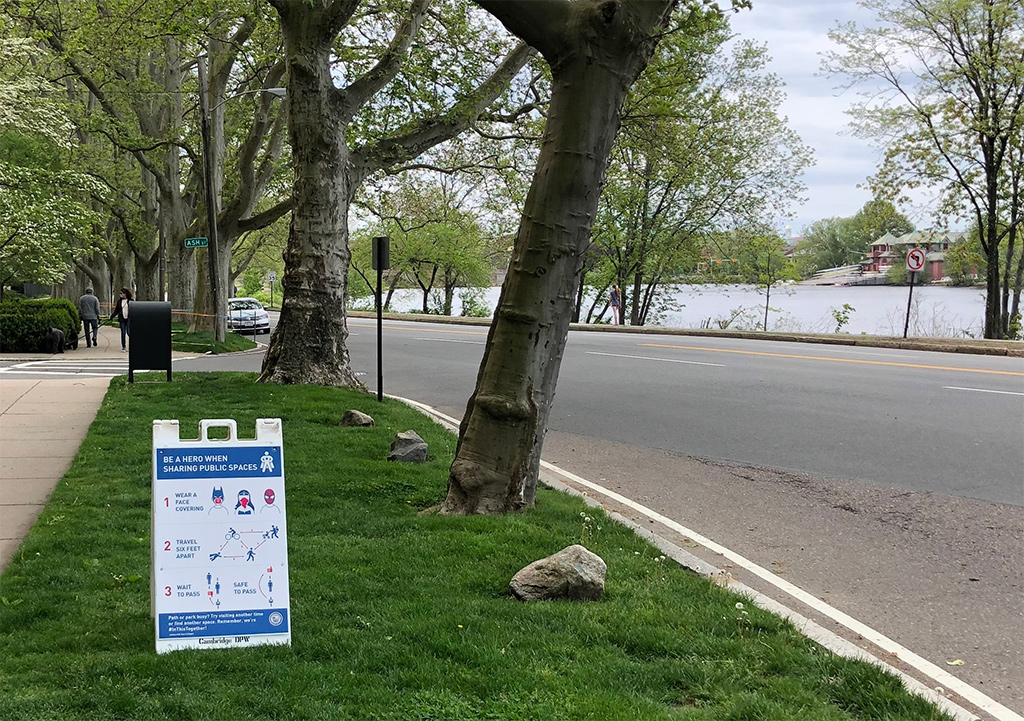 Neither an expansion nor an extension of Riverbend Park is feasible, according to a report to the City Council. (Photos: City of Cambridge via Twitter)

City Council, 5:30 p.m. Monday. It looks like the end of the road for Riverbend Park for a while, as a report from the city manager tells councillors not only that it isn’t “feasible” to extend the weekend closings of Memorial Drive geographically, from Fresh Pond Parkway to Western Avenue, but that “emerging resource constraints for [the state] make it infeasible to continue this program beyond the end of 2020.” It looks like socially distanced exercise must move somewhere else for the next few months of a coronavirus lockdown, though the city has ended its shared streets test and rejected neighborhood street closings as encouraging “block parties.” (Maybe the golf course?) The return of an order about vaccines will add to the Covid-19 conversation, and councillors will likely endorse a change in how the school district decides if it’s necessary to shut down in-person learning.

Also on the agenda are the results of the annual Resident Telephone Survey and a nudge toward a home rule petition for a fire cadet program to match a city police cadet program, which looks like a success in adding diversity and moving Cambridge residents to the rolls of local civil servants. Vice mayor Alanna Mallon also wants to know if the city can implement a state-approved sheltered market program, which would encourage municipal contracts for businesses owned by minorities, women and veterans. (Seems like a good time to ask how City Hall has improved its work with such small businesses since the council unanimously approved an order along these same lines in October 2018, after the Mayor’s Office reported hearing from several small businesses about their frustrations trying to win contracts at City Hall.)

School Committee, 6 p.m. Tuesday. Members plan to vote on a “Path to Zero” plan that looks mainly within schools, rather than at city or regional coronavirus metrics, to decide whether to close in-person learning; as well as to adopt a calendar for budget season (which would start with a Jan. 14 budget retreat); and ask for a report from staff in March on how district can better help students from lower-income families or with “high needs.” Televised and watchable by Zoom video conferencing.

Planning Board, 6:30 p.m. Tuesday. The board plans to look over a design update for Cambridge Crossing’s Child Street open space, once known as Ellipse Park, that would connect two parts to create a dog park. Nine trees – six of which are dead – will be replaced by 22 in the plans by DivcoWest, the neighborhood’s developer. Televised and watchable by Zoom video conferencing.

Public Safety Committee, 5 to 7 p.m. Wednesday. This committee run by city councillor Quinton Zondervan will talk about the Cambridge Police Department’s inventory list, and the degree to which the department seems militarized. The conversation arose during the summer amid Black Lives Matter protests and calls to defund the police and put more resources into social services. Televised and watchable by Zoom video conferencing.

Board of Zoning Appeal, 6 to 11:30 p.m. Thursday. The case of 2072 Massachusetts Ave., North Cambridge, returns: a proposal for 49 affordable apartments over nine floors. It’s already been controversial, as a neighborhood group has organized to protest the project’s size and question its implications for traffic, parking and safety, as well as its impact on the neighboring senior housing. Watchable by Zoom video conferencing.