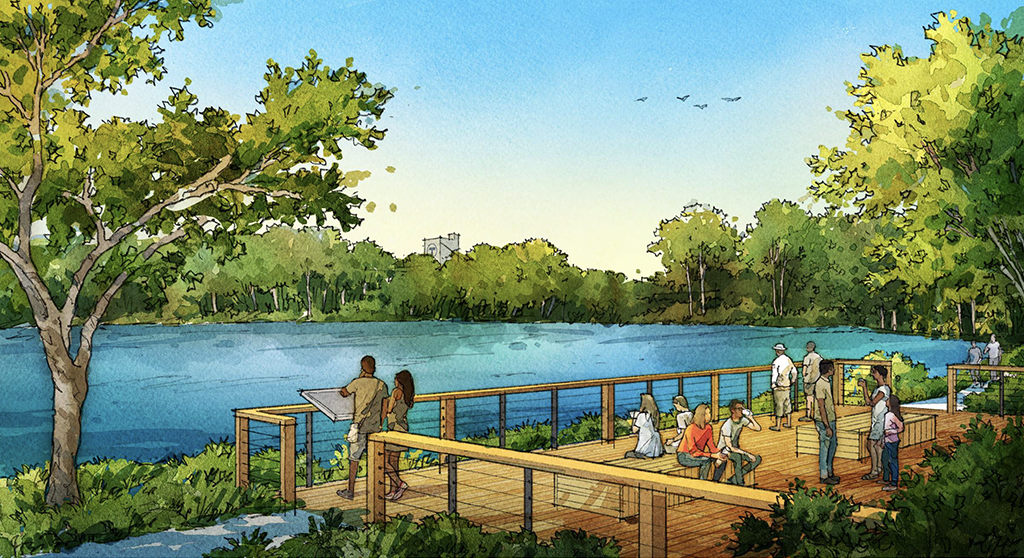 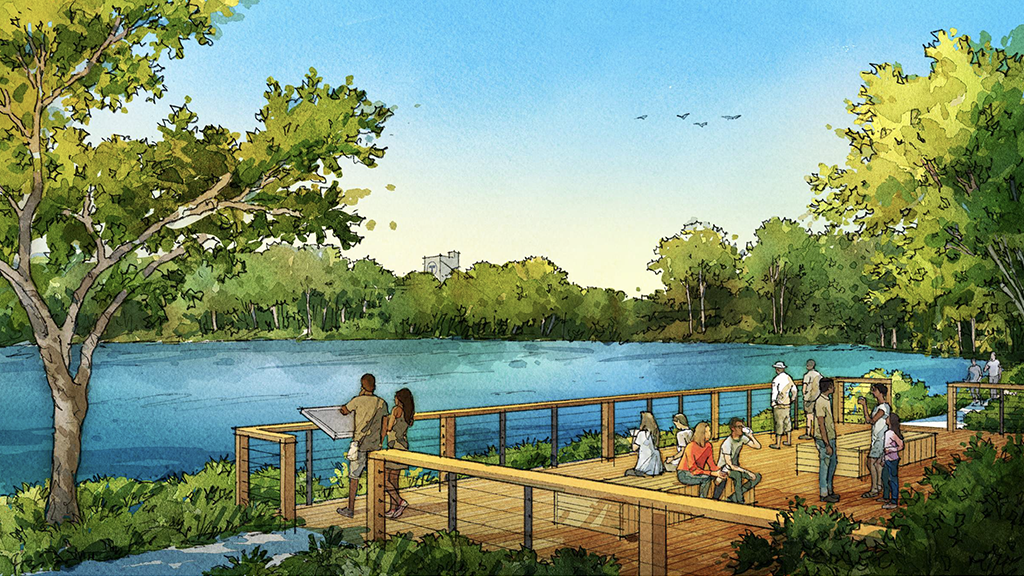 A rendering released by the developer IQHQ shows an imagined future for Jerry’s Pond after remediation.

The development company that bought more than 26 acres in July from GCP Applied Technologies, formerly part of W.R. Grace – including the polluted Jerry’s Pond and more than 10 acres of surrounding natural areas – plans a virtual community meeting Jan. 21 to share its plans for the land.

That includes three research buildings and an aboveground parking garage. But officials at the company, IQHQ, say what they do will be within existing zoning and comes with a sweetener: improvements to land around Jerry’s Pond, a former swimming hole that has spent decades locked behind a chain-link fence, that will once again give the public access for recreation.

“We were aware of the history of this site when we acquired it, and we understand the deep community interest in making sure that the site is appropriately and safely developed … We believe it is our responsibility to respond to the requests for public access and improvements to the Jerry’s Pond area, and we believe that this can be done safely,” said David Surette, vice president of development at IQHQ, in a Monday email.

Jennifer Sweet, with IQHQ’s environmental consultant, Haley & Aldrich, said that remediation of the industrial contaminants embedded at the pond could “safely expand public access for the area surrounding” it.

Even before the company’s own meeting, the neighbor-run Alewife Study Group has a Zoom meeting planned for Thursday at which the plans are certain to be discussed.

Eric Grunebaum, of the Friends of Jerry’s Pond group, said remediation and revival of the pond had been a long-term effort by many people, with many perspectives – but he could speak for himself about IQHQ’s initial organizing. “I appreciate the proactive approach of them reaching out before the [Jan. 21] meeting,” Grunebaum said of the developer. 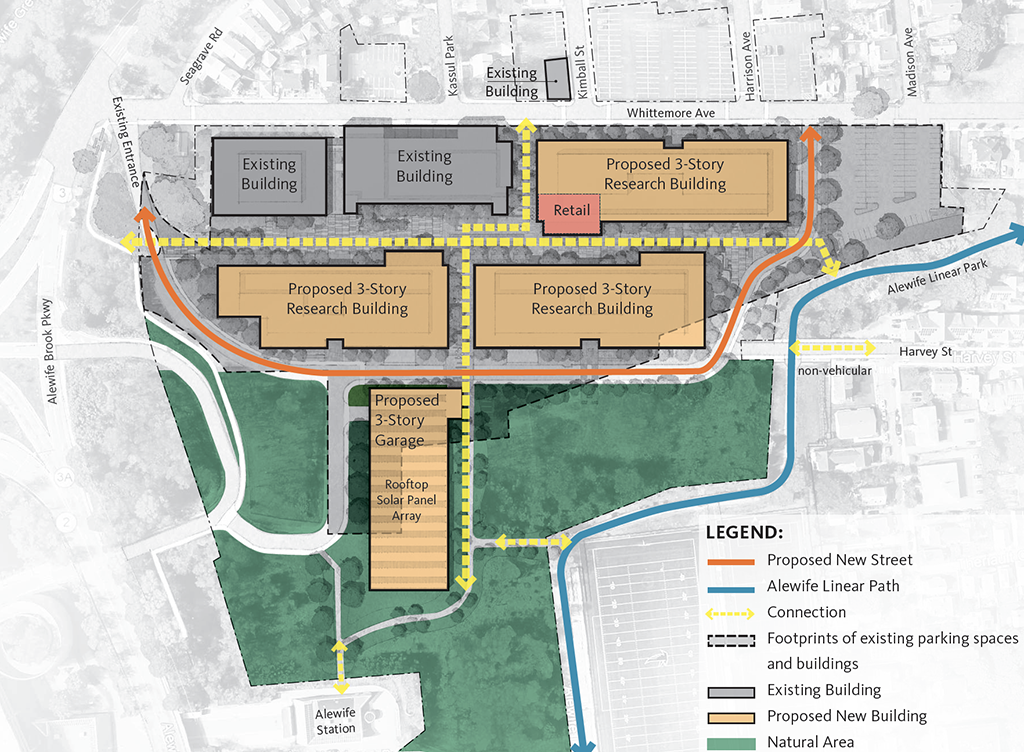 IQHQ hopes to reuse two buildings and add three and a parking garage on the 26 acres it bought in July.

Plans for a combined 365,000 square feet of new construction look mainly to build over existing parking spaces or replacing existing buildings. (Two structures along Whittemore Avenue will stay.) The garage must be aboveground, according to zoning, to minimize disruption to the floodplain. But so long as it must be, the company says it plans to take advantage by equipping the garage with a solar array. “Sustainability is a priority,” Surette said.

Surette emphasized that the company has “chosen to proceed under the existing zoning” and with environmental sensitivity throughout the site, which stretches from Whittemore Avenue to Rindge Avenue along Alewife Brook Parkway.

“We reviewed and understand the temptation to seek additional development rights, but we are not planning to seek upzoning,” Surette said. All development will stick with 55-foot height limits and add no net parking spaces.

The life sciences real estate development company, based in Boston and San Diego, bought the 26-acre Alewife Park from GCP Applied Technologies in July for $125 million. It followed that in November with another $54 million purchase on an office property nearby.

The 26 acres could serve as a kind of “gateway,” the company said, with plans pointing to a north-south connection between Whittemore Avenue and the MBTA red line stop, and east-west from Route 16 to Harvey Street.

Anthony Galluccio, acting as permitting attorney for the project, said it could connect the neighborhoods around Whittemore Avenue, Harvey Street and Rindge Avenue. “While the neighborhoods use the red line and the Russell Field recreational complex, [these] elements have not truly been connected,” he said.

The project must go through the city’s “Article 19” large project review special permit process – likely in the spring, according to the Monday email – and seek a floodplain overlay special permit. The proximity to the highway also triggers Massachusetts Environmental Protection Agency review, the company said.

Registration for the Jan. 21 meeting is here. Though the company has created a website for site materials at IQHQcommunityprocess.com, on Tuesday it was blank.