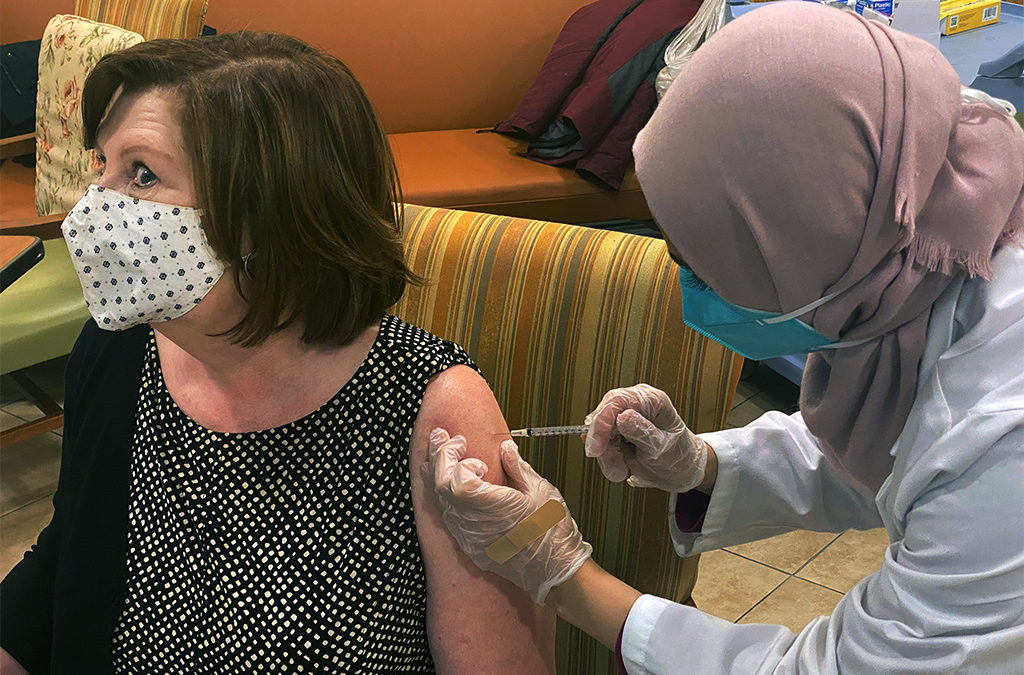 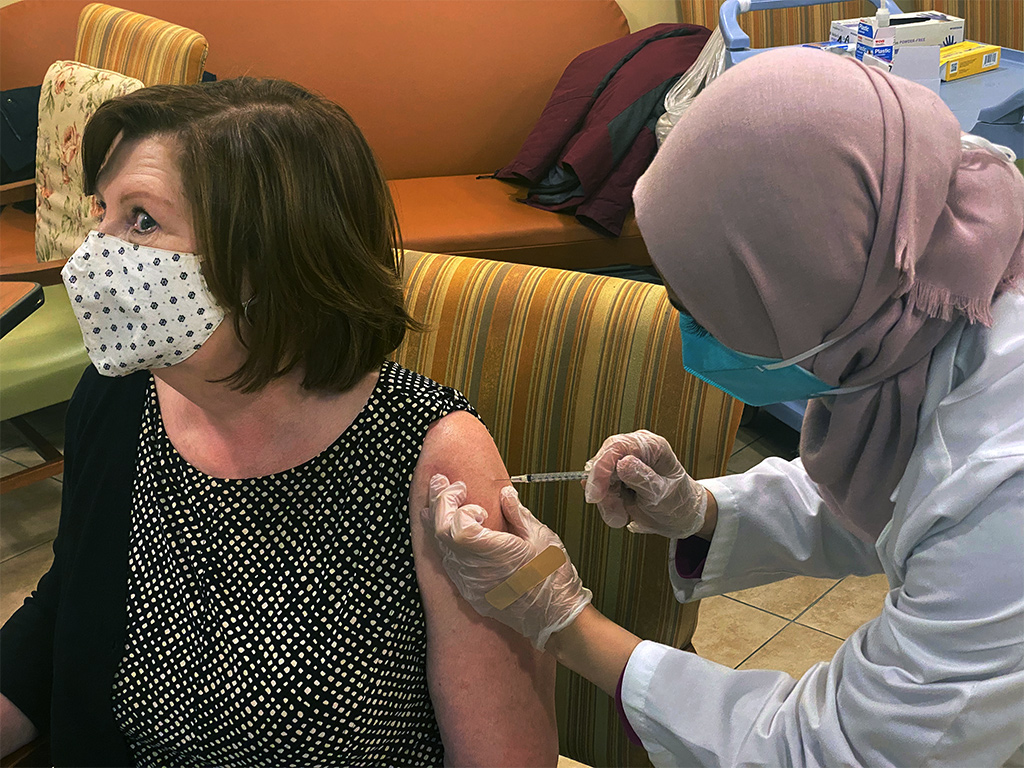 Some people have received multiple invitations to make an appointment for a Covid-19 shot, without lifting a finger, since the state opened vaccinations Feb. 1 to anyone 75 and older. Others have spent hours on the computer looking for a vaccination appointment, without success.

Meanwhile, people 75 and older who are relatives or friends of a Cambridge Health Alliance employee might have been invited, out of the blue, to sign up for a vaccination; people 75 and older who see doctors at Harvard Vanguard, part of the state’s largest independent physicians’ network, have been told they must wait for at least another week to get vaccinated by their clinic because the organization hasn’t received the necessary vaccine.

These experiences illustrate the state’s confusing and uneven allocation of vaccine that provided a glimmer of hope after almost a year of pandemic grimness. Those without an invitation are directed to mass vaccination sites such as Fenway Park and Gillette Stadium, pharmacies and a state vaccine-finder website that many have found extremely frustrating. Critics have said the system favors elders who are either proficient on a computer and have the patience to use the site, or have children to help them and a car they can drive.

The most recent state weekly vaccine report, on Thursday, shows that only 3 percent of those who have received at least one dose are black; 3.8 percent are Hispanic; and 3.2 percent are Asian; 36 percent of vaccination records don’t include racial or ethnic information. The Cambridge Public Health Department said it plans to track racial and ethnic data.

Polls show black and Hispanic people are more likely than white people to defer or decline the vaccine. The state has added pharmacies in Roxbury and Mattapan to its vaccine finder site; on Thursday a search for available appointments near Cambridge showed numerous slots in those pharmacies this week with only one available at Fenway.

Representatives from the state Department of Public Health and the Covid-19 Command Center have not provided explanation or description of priorities in the distribution plan. “The state’s decisions about where to allocate the limited supply of vaccine [are] completely opaque,” Somerville Sen. Patricia Jehlen said in an email.

It appears clear that the state has prioritized hospitals for vaccine administration. That is why some people, including this reporter, got many chances to sign up for an appointment. I received three, from three different hospitals where I have seen providers. And I saw no way to tell the two I didn’t choose that I had selected a different hospital.

As for “friends and family” of Cambridge Health Alliance staff getting invitations if they were in the right age group, Alliance spokesman David Cecere said the health care system launched the program “to find people in the community over the age of 75 to be vaccinated.” The program ended last week and “allowed us to get vaccine into people’s arms faster.”

Cecere said he didn’t have “details” such as how many friends and family were vaccinated. He said the Alliance has vaccinated “more than a quarter” of its own patients in the eligible age group. Those patients may also be getting invitations from Beth Israel Lahey Health, the Alliance’s clinical affiliate.

Volunteers do what state government can’t

With duplicate vaccination opportunities floating around, the state has not disclosed how many doses of vaccine have been discarded. The requirements for vaccination sites are exacting. For Pfizer vaccine, the minimum request is 975 doses; for Moderna, 100 doses. Sites must use all doses they get within 10 days; recently the state began allowing vaccination providers to transfer unused vaccine to another approved site.

Those without an invitation face the state’s frustrating vaccine-finder site. After Massachusetts opened vaccinations to anyone 75 and older, many complained that they couldn’t find appointment slots after filling out numerous online requests for information to verify their eligibility. At first Gov. Charlie Baker blamed inadequate vaccine supply from the federal government; later he acknowledged flaws in the state rollout.

At least two volunteers used their expertise to create sites that were much easier to negotiate: macovidvaccines.com, the work of Olivia Adams, 28, an Arlington software developer on maternity leave, and MAvaccinate.com, created by a group that collects information from the state sites and makes phone calls to find out about available slots. State spokespersons didn’t reply to questions about their response to the alternate sites or say how and who developed the state’s website.

In Cambridge, the city’s public health department says it’s prepared to open a public clinic for residents or even anyone who lives in Massachusetts, if the state gives the city enough vaccine. The department has picked out a likely site: the CambridgeSide mall garage, where it has provided drive-up Covid-19 tests and flu vaccinations. Meanwhile, the CVS pharmacy at Fresh Pond was to offer vaccinations this week, according to Mayor Sumbul Siddiqui. And residents who are patients of doctors at Mount Auburn Hospital or Beth Israel Lahey Health can get vaccinated at the Marino Center in North Cambridge.

The health department and the Cambridge Housing Authority have made some progress getting onsite vaccinations for about 1,300 residents of low-income public housing for seniors and disabled people. The state had cut the local agency’s vaccine allocation to 100 doses a week, but after the city specified how much vaccine it needed, the state said it would send 400 doses this week, chief public health officer Claude Jacob told city councillors Monday.

On Wednesday and Thursday, the city vaccinated 278 residents of Central Square’s Manning Apartments and East Cambridge’s Millers River Apartments in their buildings, Jacob said. Housing authority executive director Michael Johnston said about 400 people live in the two developments, which works out to a vaccination rate of almost 70 percent.  The authority doesn’t know if those who didn’t get a shot “said ‘no’ or had already received a vaccine someplace else or had plans to go someplace else,” Johnston said. 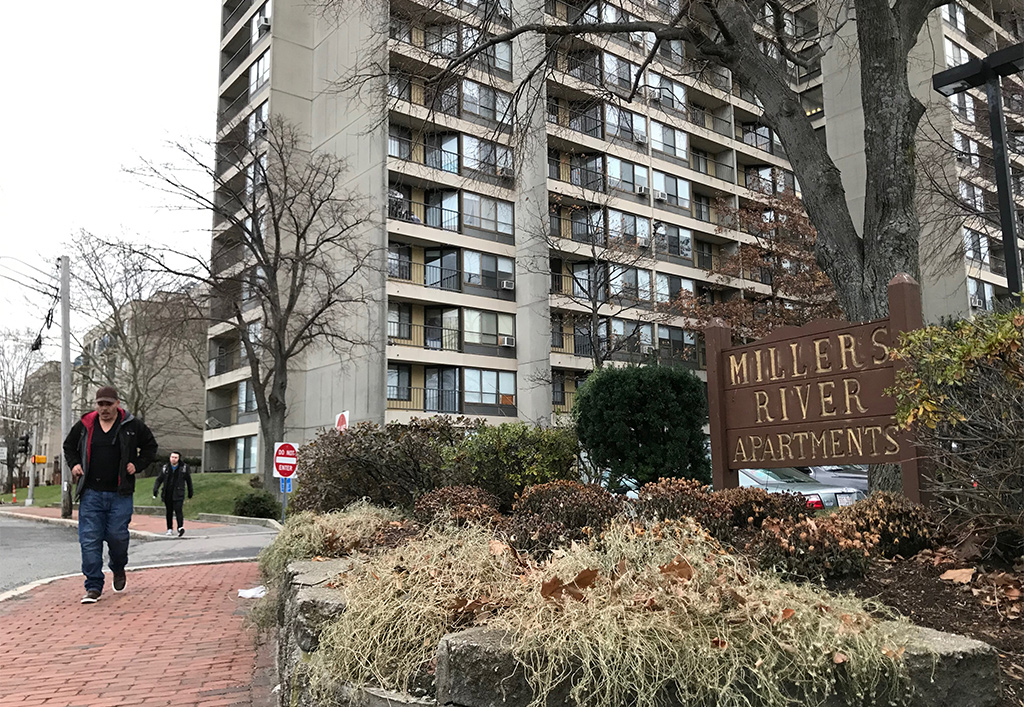 The health department is preparing to offer shots to residents and staff at Burns Apartments and LBJ Apartments this week, Jacob and Johnston said. Also in the works: vaccinating residents at 116 Norfolk St., the housing authority’s single-room occupancy site that houses many tenants who were previously homeless, Johnston said. According to one resident, Jeffery Mcnary, tenants often forgo masks and gather with friends without distancing. The service coordinator for the building confirmed that some residents don’t follow Covid precautions, but noted that only four residents had tested positive.

There was confusion over the status of 116 Norfolk St., another sign of the state’s unclear vaccination program. Johnston believed it was a congregate care facility because the state Executive Office of Elder Affairs lists it that way. That would have put its residents in the first phase of the vaccination program starting last month.

A state official told Johnston last week that the building fell into the senior affordable housing category, though, so there are plans to vaccinate the residents later this month, Johnston said. Paul Hollings, executive director of Somerville and Cambridge Elder Services, which manages the building, said it all depends on vaccine availability.

This post was updated Feb. 10, 2021, to correct the spelling of Sue Bowdridge’s name.