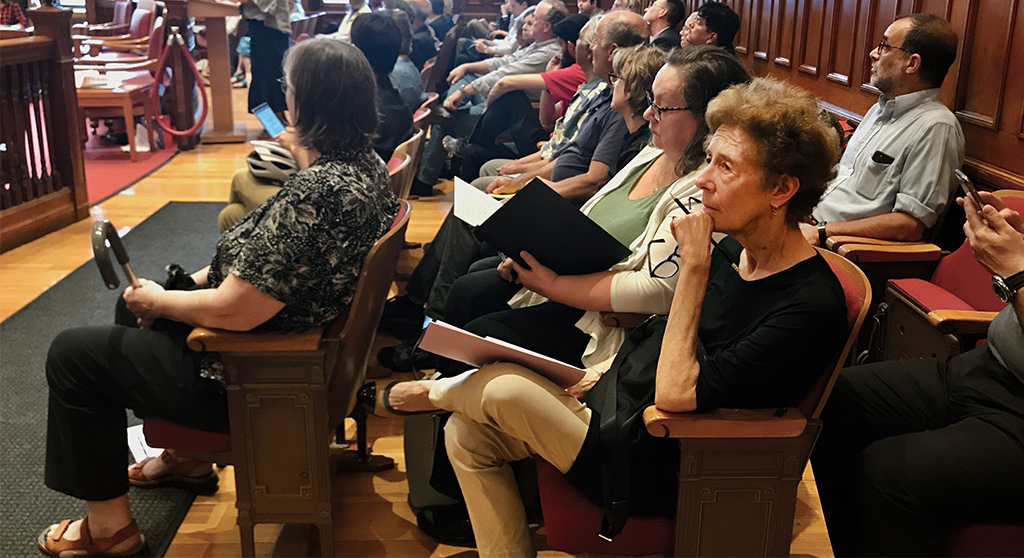 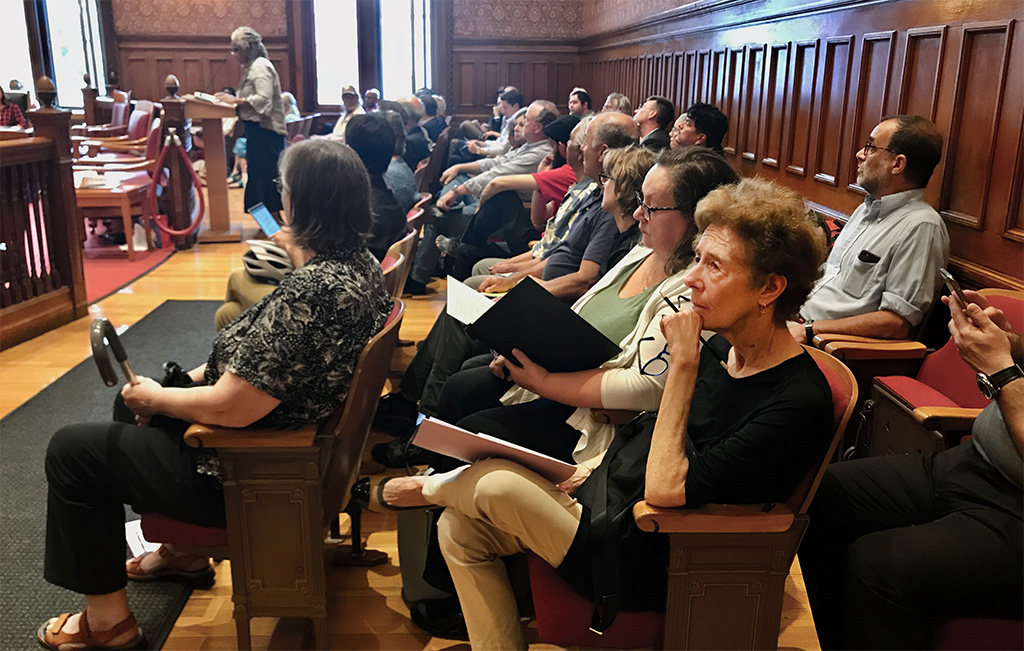 The City Council’s Sullivan Chamber, seen in City Hall during a June 2019 meeting, may not feel welcoming to all residents or the groups representing them. (Photo: Marc Levy)

“Well, this is certainly not Sullivan Chamber,” I thought as I sat down at the City Council’s Neighborhood & Long Term Planning, Public Facilities, Arts & Celebration Committee meeting Thursday.

For starters, the chair was comfortable, I had a cool glass of water at hand and I sat at the Zoom table, a co-equal among the rectangles, unseparated from my representatives by the gates and raised thrones of the unfriendly real-life home of the council.

Here are some of the challenges that stood out for me:

Just who does a self-described group represent?

There is power in us getting together to act as a group, and that power has more impact when the group membership reflects the represented accurately. Most panelists among the 40 or so representatives of more than 15 neighborhood and citywide groups spoke about the constant challenge of making sure their group was welcoming, diverse, and open to all. Many mentioned the structural difficulty of finding time to devote to a volunteer job. Volunteerism favors those with time and disadvantages those without.

Suggestions for meeting this challenge included visiting neighbors at their homes, freeing up parents with child care and keeping the group fed, as well as active and persistent recruiting of the underrepresented and their voices.

How do you handle group discussions?

It came as a great surprise to me as I was growing up that not every one thought the same as I did. With each passing year, I learned that my best ideas are improved by listening to someone else’s ideas. While my childhood dinner table discussions of eight might get by with simple rules of speaking loudly, larger groups need to agree on how to communicate.

Robert’s Rules of Order, an old and very formal set of meeting rules that is used by the City Council, is a good starting point. While having all conversation go “through the chair” may not appeal to everyone, the basic principles are good ones: Agree on a facilitator and agree that everyone has a right to state their ideas, discuss them and participate in the decision.

What can the city do to help neighborhood groups?

Some themes stood out: Provide meeting space, provide expertise, listen, provide an ombudsperson, ask, fund and even allow use of the city’s electoral machinery (and proportional representation, no less) to help decide neighborhood issues.

Some panelists rejected the idea of city oversight over neighborhood groups. At the same time, some public commenters requested that the city police the groups that appear before them.

So how should the council resolve this apparent conflict? Beyond inviting topic-specific groups, it’s not the council’s job to decide who sits at its table. It’s the councillors’ job to listen; then they should judge participants on their ideas. The quality of council decisions depends on a big table.

The committee meeting was great, and I learned a lot. The Zoom format was well-run and effective. I did miss seeing some of the city’s best neighborhood groups at the table. There is still work to be done at making all feel welcome at neighborhood meetings and City Council meetings.

Tom Stohlman is a Massachusetts Institute of Technology graduate and Cambridge architect and planner who identifies himself as a “failed candidate for Cambridge City Council (2009 and 2011).”