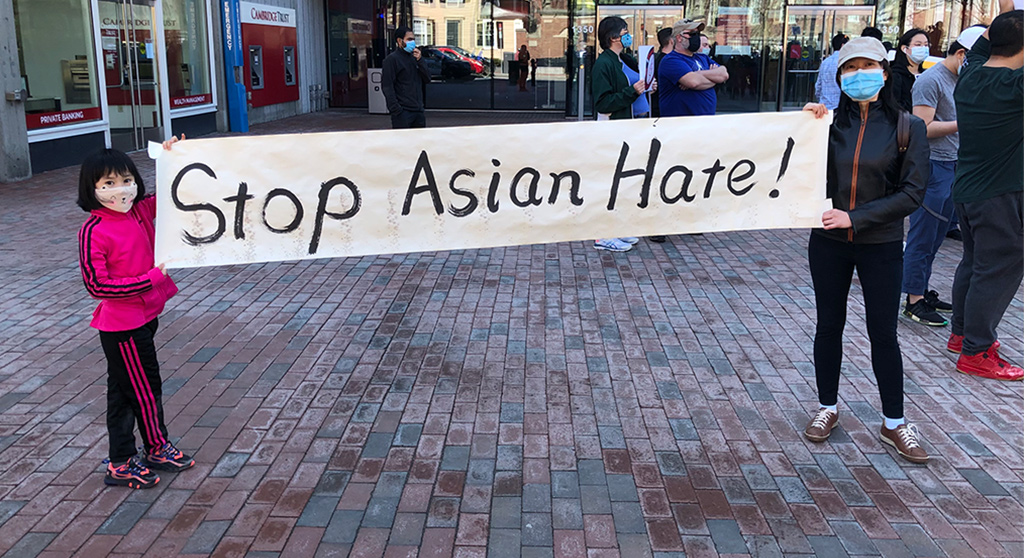 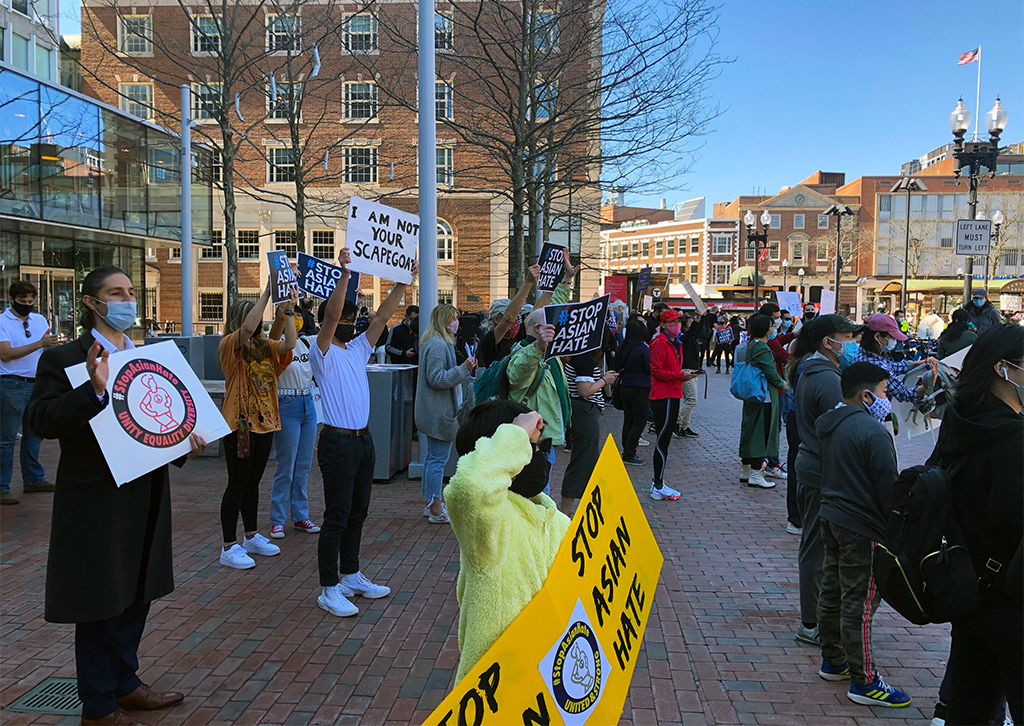 More than a hundred people gathered by the Harvard Square T station Saturday to protest surging hate crimes against Asians and Asian Americans. From elementary school students to elders, people of all races and walks of life stood together, held signs and gave speeches to “Stop Asian Hate.”

Many protesters saw the March 16 murders of six Asian American women in Atlanta as an “explosion point” in the trend of rising violence against Asian Americans. While the overall rate of hate crimes decreased in the United States over the past year, hate crimes against Asian Americans have skyrocketed, said Lily Shen, an event organizer with the newly formed Chinese American Association of Cambridge, which organized the rally with partners the University Forum, Woodenfish Foundation and Boston Asian Moto Club.

In Cambridge and Somerville, there have been at least 16 acts of physical and verbal abuse reported by the Asian American community since the spring of 2020, according to IAmNotAVirus.net, a platform created by Harvard graduate students Boram Lee and Ja Young Choi. In Boston, the number of hate crimes against Asian Americans has increased by 150 percent, according to NBC News.

Jiaxuan Tong, a data analyst working in Cambridge, was one of the main organizers of the Saturday rally. “We have the obligation to organize this event to give our community a chance to speak up, but also to let our community know that we do exist and what we have endured for the past year,” Tong said. 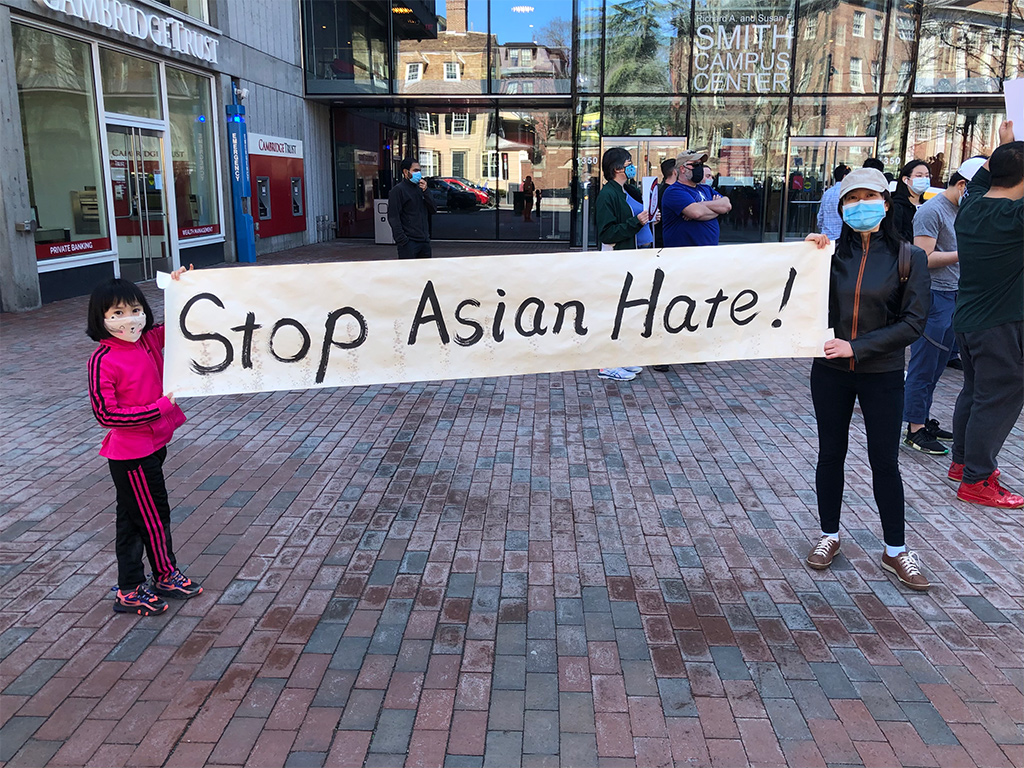 The CAAC had only a week to put the event together, Tong said, crediting other Asian American organizations as well as the city government for support. “[The City of Cambridge is] really active about this. Whatever we requested from them, they would respond immediately,” Tong said.

City government supported a vigil last March 21 that took place in front of City Hall to honor the victims of the Atlanta shooting. Officials including Mayor Sumbul Siddiqui took part. “She has a lot of feelings and thoughts herself, and I think that’s why she’s super supportive of this event,” Tong said of Siddiqui, an immigrant from Pakistan.

Some demonstrators spoke Saturday about their own experience with anti-Asian hate, though reluctant to give their full names. Ting, an international student from China who came to the rally to show support after seeing it promoted on social media, said she was abused verbally by a white woman while crossing a street. “I don’t think I did anything wrong to be yelled at,” Ting said.

Mark, a Cambridge resident of Chinese descent, said he has seen many Asians and Asian Americans suffer racial discrimination that might not have been reported due to cultural characteristics — in certain Asian cultures, for instance, children are taught to be nonconfrontational. In recent months, police have also attributed underreporting of acts of discrimination to language barriers and the cumbersome process on victims. “We should stand up and say, ‘Hey, this is not right,’” Mark said.

For some non-Asian protesters, the event was about standing up for their neighbors. “Hate against all people is wrong, whether it’s Asian people, African American people, people of any nationality or color,” said John Robinson, 72, of Somerville. “Violence, hatred or division have no place in this society.”

About 10 demonstrators spoke, including Michelle Chen, a second-generation Asian American from Cambridge who attends high school out of the city and denounced anti-Asian racism whether in the form of banal microaggressions or overt violence; and Isabelle H. Leighton, a first-generation Korean immigrant and the owner of an education company. Michelle Oh, a political researcher, offered insight on national trends of discrimination and division. Lucas Liu, a student at the Buckingham Browne & Nichols School, asserted that the “model minority” myth must not drive Asian Americans apart from other communities of color.

Tong agreed. “This [model minority label] is also denying the fact that we, the Asian community, are just as diverse and complicated as other communities. We have vulnerable groups as well,” Tong told the rally. “We hope to celebrate the diversity together without fear. Our voice is your voice, and yours is ours.” 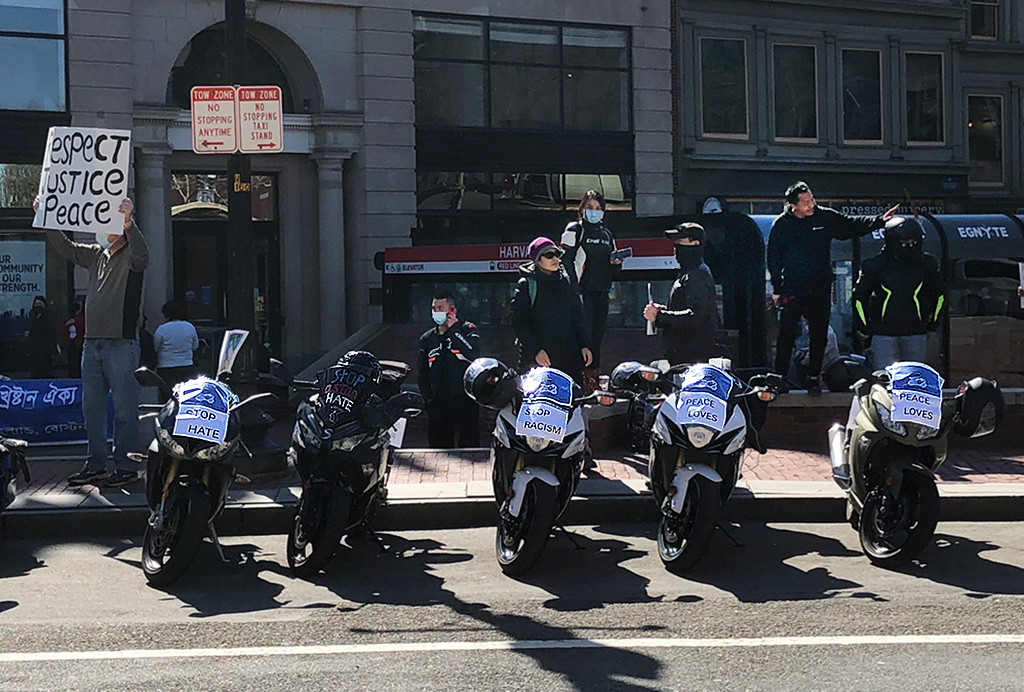 The demonstration drew significant attention from pedestrians and vehicles along Massachusetts Avenue. Cars and MBTA buses punctuated speeches with their horns, showing support. In response, demonstrators cheered and waved back. Several passersby engaged in conversation with demonstrators. Some stopped to hold signs.

A conspicuous fleet of motorcycles from the Boston Asian Moto Club parked alongside motorcycles of the Cambridge Police; signs attached to their bikes read “Peace Loves” and “Stop Hate.” From noon to 2:30 p.m., they rode around Harvard Square with pomp. Along with chants of “respect” and “justice,” they revved their engines and honked their horns.

“We must make noise to be heard, or else we will be silenced,” a protester remarked.