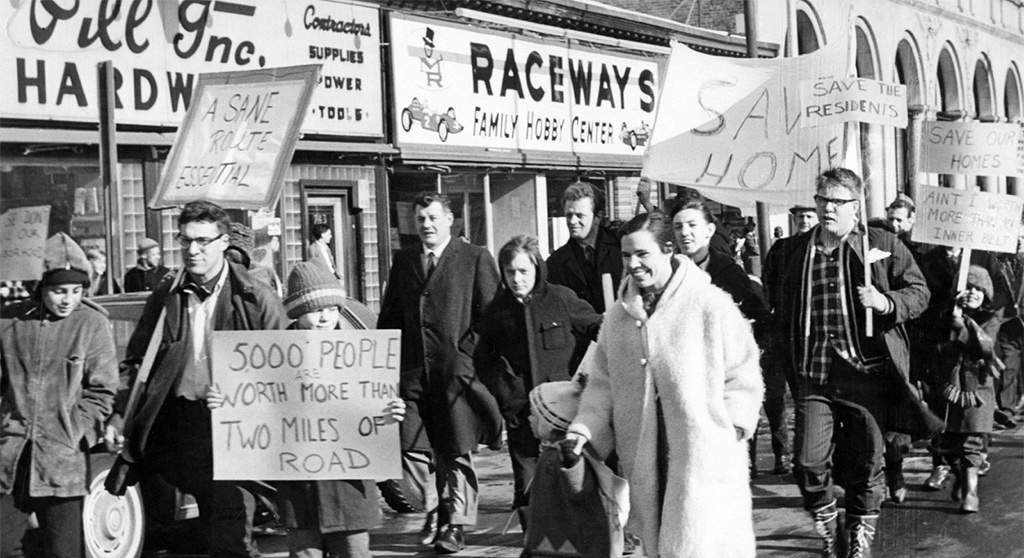 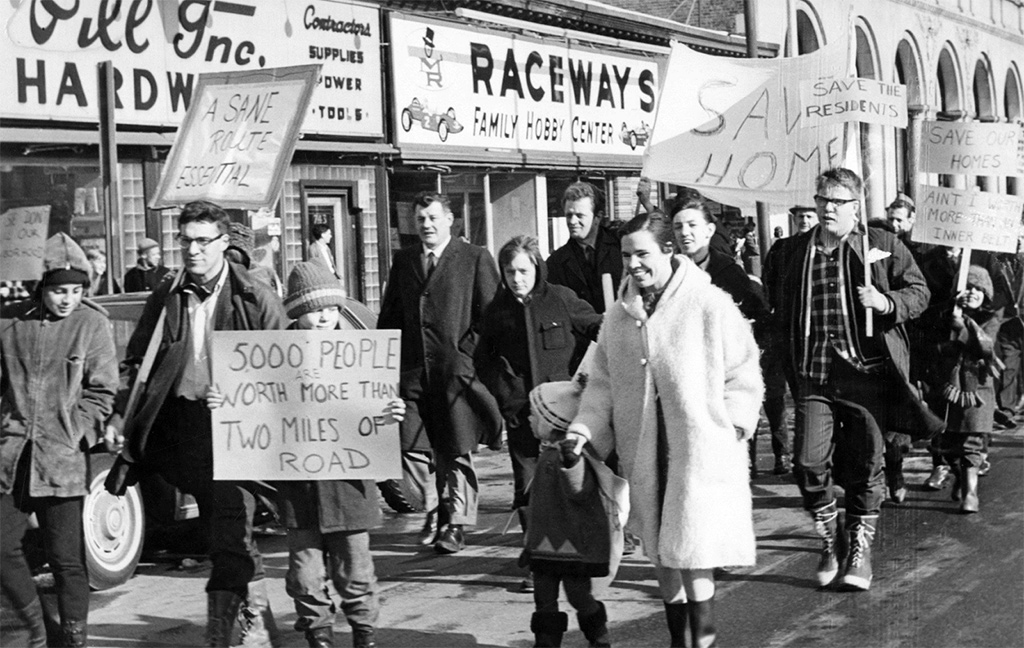 Other parts of Cambridge have also historically been sites of engagement, but Central Square is an especially interesting site of activism. (Photo: Cambridge Historical Commission Inner Belt Scrapbook)

Central Square has been characterized for much of its history as a working-class neighborhood. In the 1960s, the demographics around Central Square began to change subtly. The growth of local universities led to greater numbers of students in search of housing in the neighborhoods between the Massachusetts Institute of Technology and Harvard University. At the same time, as blue-collar jobs declined, working-class families began to leave Central Square. With many students involved in the developing social movements of the mid- to late-1960s, the changing communities surrounding Central Square merged the goals and visions of these movements with other, more local matters. During the ’60s, residents of Cambridge were also organizing against the construction of the interstate highway system through the city. In the following decade, a housing crisis and university expansion led to a push for tenants’ rights and increased community services.

Although each cause traced its origins to specific moments and contexts, the activities and ideals of these movements continued into later decades through increased concern with women’s liberation, housing and civil rights. The causes promulgated by activists over the past 60 years in and around Central Square demonstrate an active pursuit by Cambridge residents for continual change.

Community engagement has appeared in a variety of forms near Central Square, such as publications, radical businesses, public art, protests, politics and social services. Other parts of the city have also historically been sites of engagement, but Central Square is an especially interesting site of activism.

One reason is its proximity to several universities, which affect the use and development of the area as well as the demographics of surrounding communities. Because of this, Cambridge residents have organized continually in Central Square through or against local universities.

Another reason is Central Square’s location at the center of Cambridgeport, Riverside, The Port and Mid-Cambridge. While Central Square can be seen as peripheral to each of these neighborhoods, it also lives up to its name as a center for people in Cambridge. This characteristic of Central Square has encouraged involvement over decades within communities about neighborhood concerns.

Its location near City Hall and other local government structures also makes Central Square especially relevant to activists and other residents of Cambridge. Cambridge residents have civically and socially engaged by working within or protesting against city government.

Each of these factors, among others, has come together throughout Central Square’s recent history to create a unique setting of activism. Central Square and its surrounding neighborhoods have been sites of tremendous social and political activity. Here, activists sought to achieve visions of affordable housing and food, equal representation and civil rights. As settings of debate, protest, community building and organizing, both past and ongoing, Central Square has historically sparked such community efforts.

To see all six stops on the “Central Square Activism From the 1960s to Now” self-guided tour, visit the Cambridge Historical Society website. This tour was made possible by funding from the Cambridge Heritage Trust.

Amelia Zurcher is an intern at the Cambridge Historical Society.