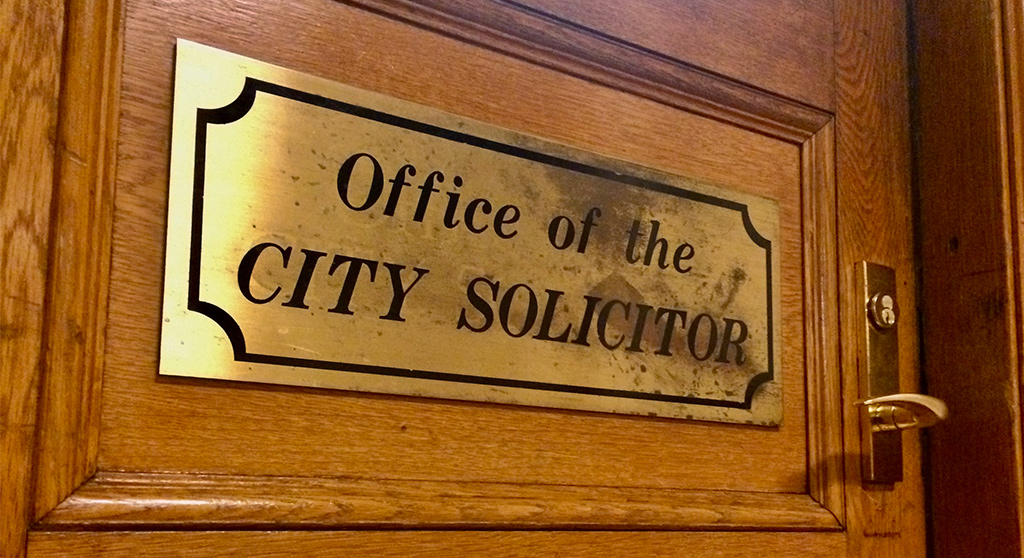 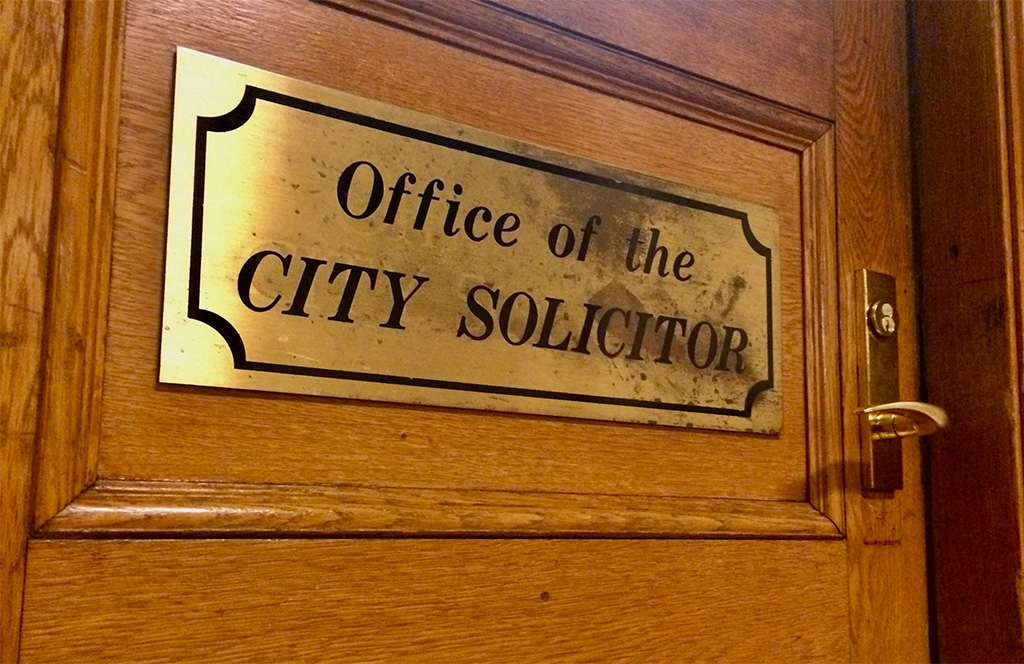 The Office of the City Solicitor at Cambridge City Hall. (Photo: Marc Levy)

Questions remain after a Tuesday budget hearing around city councillors getting legal advice outside the city’s Law Department, which also serves the city manager and has been slow and off-topic in several responses over the past several years. The topic remained murky enough that at the end of the half-hour hearing, the city manager was still offering a budget for something the city solicitor deemed to be in violation of city law; and councillors said they still lacked a firm sense of why it was a violation or how the Law Department’s proposed alternative would work.

Before and apart from the Finance Committee budget hearings, councillors had asked that they get a budget for outside counsel of no less than 5 percent of the Law Department budget – for the next fiscal year, at least $184,000. The initial order written by councillor Jivan Sobrinho-Wheeler was filed April 12.

After hearing city solicitor Nancy Glowa give examples from around the state of where a branch of community government wanted its own legal advice but was denied by a charter or court, and a reiteration that Cambridge’s city charter also doesn’t allow it, Sobrinho-Wheeler had an observation that cut to the quandary.

“It would be great to have an outside legal counsel to give us an opinion on this,” Sobrinho-Wheeler said. “It really illustrates the need for it.”

Councillor Patty Nolan agreed that there are times that interpretation of laws disagree, “otherwise, we wouldn’t have courts of law – there would just be, well there’s a law, and that’s it, and nobody would ever go to court because everyone sees it exactly the same way.”

“This isn’t about us shopping around for a second opinion, it’s about understanding the full flavor of interpretations of various law, and sometimes it’s a little bit gray,” Nolan said.

Adding to the confusion was Mayor Sumbul Siddiqui’s belief that in presenting the Law Department’s case to remain the sole conduit for legal advice to councillors, the department had received its own outside legal opinion. She asked that it be provided to the council if it exists. Neither Glowa nor City Manager Louis A. DePasquale responded.

There was a more basic kind of confusion on the part of councillor Quinton Zondervan, who reminded the officials present that one reason a legal advice budget for the council was proposed was that members were already getting outside legal advice, but from lawyers giving it for free.

That too went unanswered.

That seemed to change after Glowa underlined her belief that the request violated the charter, proposing instead to run the council’s outside legal advice through her own office, which already has a line item for outside counsel.

“It’s pretty clear cut that we think that would be a violation of the charter,” DePasquale said then. “We are not opposing giving outside counsel help. We’re just saying it should come through the city solicitor. It can’t be directed through the City Council.”

Glowa suggested that the delays the council has seen for the past several years was a result of understaffing. “Getting up to our full staffing … would give us much greater bandwidth to make sure that we’re addressing all the needs of our office,” she said.

Assistant city solicitor Katharine Sarmini Hoffman left the department Jan. 8 and was replaced April 26; first assistant city solicitor Samuel Aylesworth left April 2, but his position was filled May 10 from within the department, with his replacement’s own vacancy so far not filled, according to the results of a public records request. The other department vacancy resulted from administrative assistant Betzie Gagne leaving April 9 – another position so far unfilled.

She failed to mention that the number of public records requests have surged as a result of city policy: Questions asked of city officials are turned into formal requests, which go to a public records officer, instead of being answered by officials who have that information; the requests are sometimes made without the knowledge or permission of the person asking. This is a change in practice from just a couple of years ago.

Leading up to Sobrinho-Wheeler’s April order, the Law Department was short only one lawyer from its typical staffing, and that vacancy started three months earlier.

“We can work harder”

As the Law Department scrambled to present options after years of annoying the council, Glowa told councillors that “we do want to be responsive to the City Council and provide the best legal services available, [and] we would hope that the council would rely on this office as designed, and particularly with the getting back up to being fully staffed, we would provide the services in a more efficient and responsive manner.”

“In many instances the work would be more responsive, more on point, more efficient and faster if it were done within the Law Department,” Glowa said.

An outside counsel budget run through her department would ideally be used little, she said,“because I do believe that we can work harder to both get back to the council more timely and and reassure the council that we are able to do this work in a way that the council can feel good about.”

When that wouldn’t be the case, Glowa proposed a process in which one or more councillors “would submit a proposed order; if the order is passed by majority vote at a public meeting to request a particular legal opinion or legislative services, that would then be forwarded to this office.”

But the process of ever getting outside counsel remained unclear to Nolan, Sobrinho-Wheeler and vice mayor Alanna Mallon – who at least wanted to make sure that such a vote happened in one round, not as a general request and later as an approval based on a dollar amount. “There would have to be some work done upfront by councillors who put in a motion … to say ‘I’ve spoken with the Law Department, this is the route that we’ve decided to go,’” Mallon suggested.

“That seems still a little murky to me,” Nolan said. “And a little confusing, honestly.”

The Law Department budget of $3.7 million was forwarded for a final say by the council on a 7-0-2 vote Tuesday, with Sobrinho-Wheeler and Zondervan voting “present.”