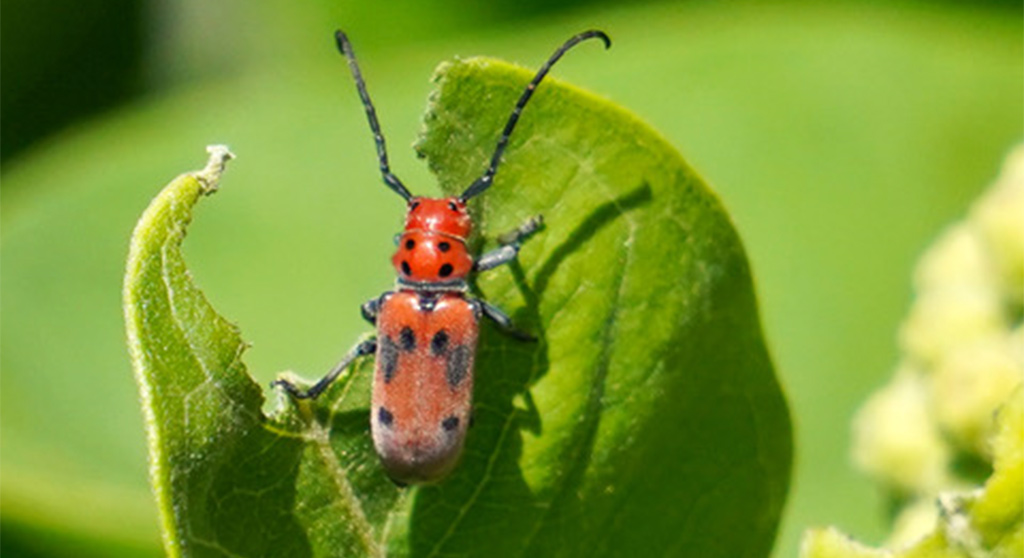 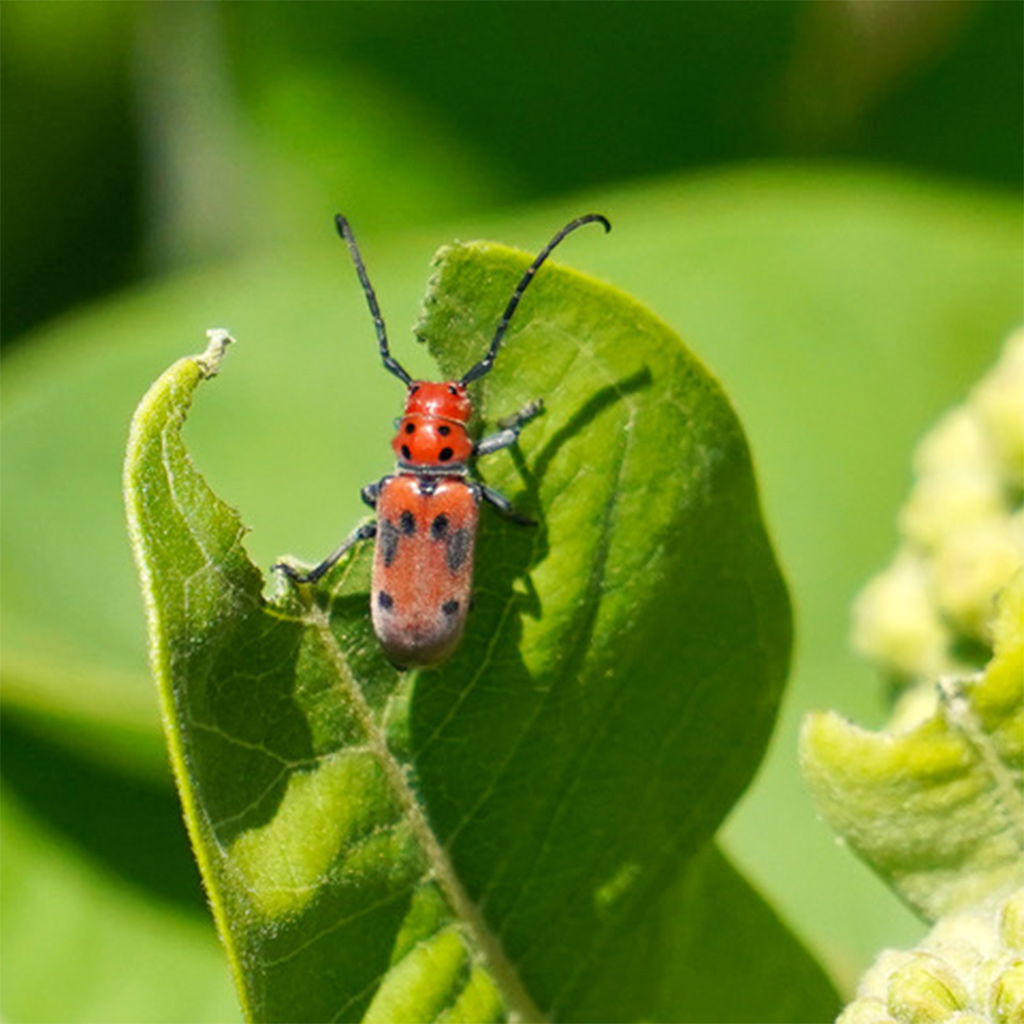 As more people have become aware of the benefits of milkweed as a host plant for monarch butterflies, you will likely see more patches of it as you travel through the city. And if you look carefully, long before the monarchs arrive you may see a spotted, long red beetle with curled black antennae. This is a red milkweed beetle.

An adult eats milkweed leaves and flowers, cutting the veins of the leaf below where it eats and draining the sap from the area. The beetle feeds in the drained area, so it is less exposed to the sticky, milk-colored latex that gives milkweed its name. If a red milkweed beetle gets the latex on its mouth, it cleans itself by rubbing its mouth on the leaf, because if the latex hardens, it can gum up the beetle’s mouth. 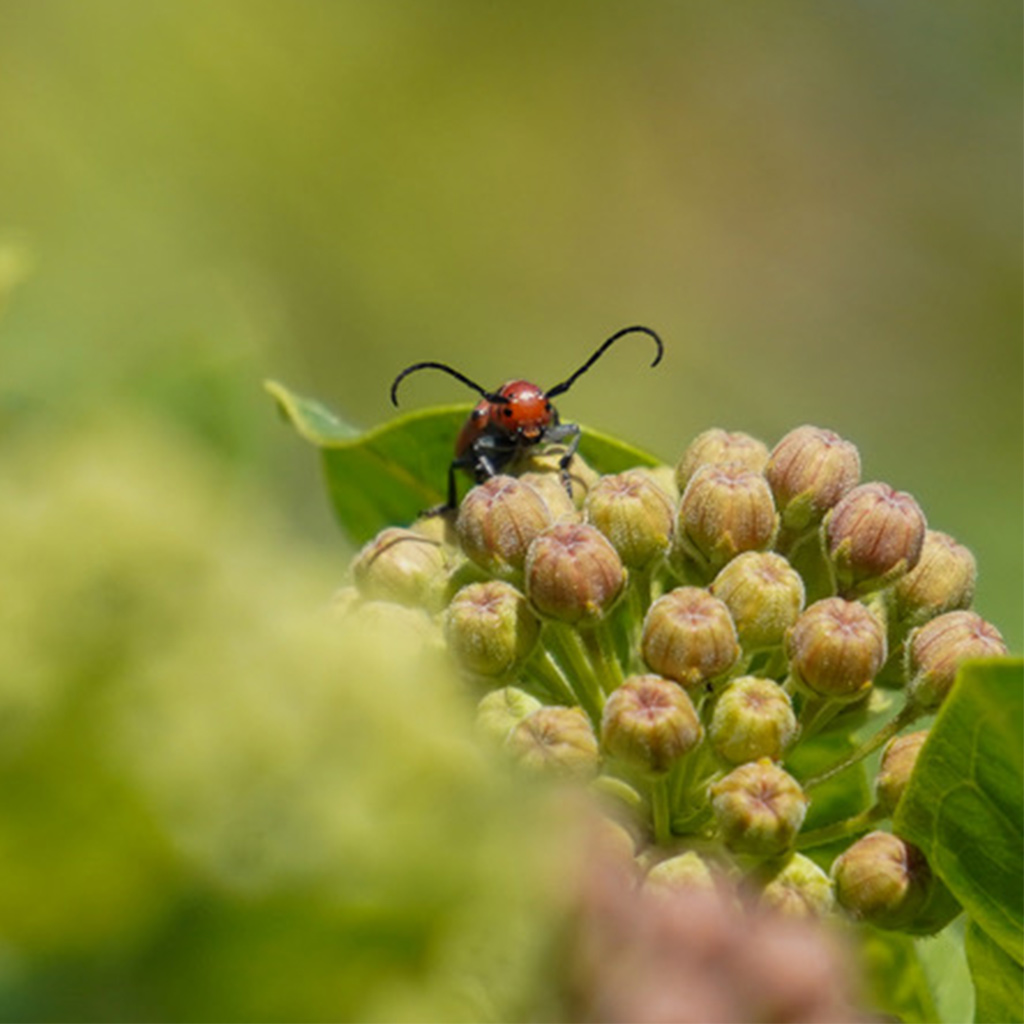 The beetle is sometimes called “four eyes” because each antenna bisects an eye, literally giving it four. (Photo: Jeanine Farley)

If you were to pick up a red milkweed beetle, you might hear it make a shrill squeaking sound by rubbing together structures on the front and back of the thorax. It makes this sound when it is stuck in a milkweed blossom, is fighting, falls on its back or is in other sorts of distress. When it crawls or feeds, a red milkweed beetle may make a soft purring sound.

In early summer, the female beetle lays eggs at the base of a milkweed stem. The larvae/grubs travel down the stem to the soil, feeding on the milkweed’s roots until fall. They overwinter in the root and form a pupal case/chrysalis in the soil the following spring. Adult red milkweed beetles emerge in early summer when the milkweed begins to flower.

Native long-horned beetles such as the red milkweed beetle have a valuable place in our ecosystem, helping to preserve the balance of nature. Red milkweed beetles, herbivores that eat only milkweed, are not harmful to monarchs or harm monarch eggs or larvae, so you do not need to remove them from your milkweed plants. The two species can and do coexist peacefully.