‘Together’: The Covid pandemic is raging outside and an unhappy couple is doing the same inside 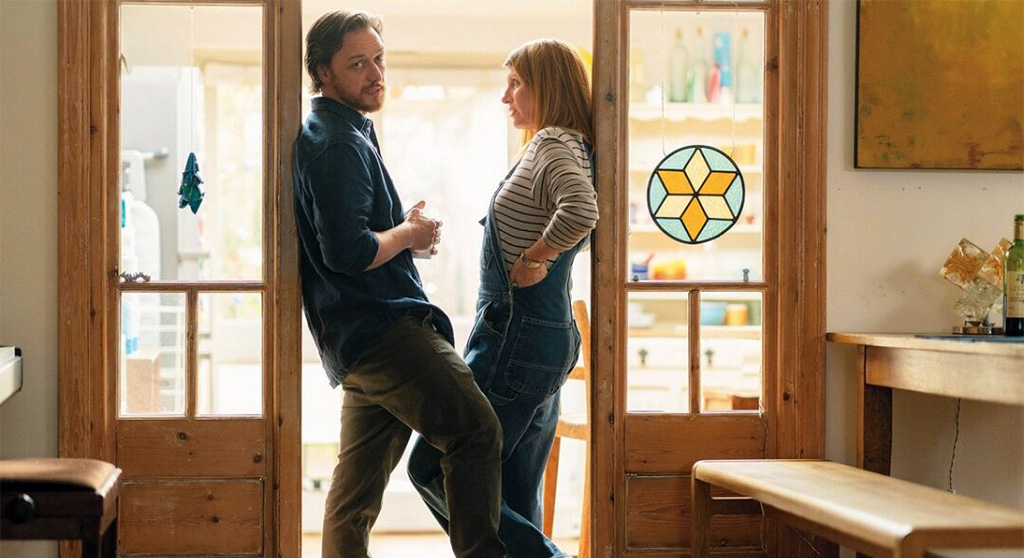 ‘Together’: The Covid pandemic is raging outside and an unhappy couple is doing the same inside

Directed by “Billy Elliot” director Stephen Daldry, “Together” is an at times heavy-handed drama about surviving quarantine. To the benefit of the picture, it isn’t so much a story about pandemic life – the mundanity and built-up anxiety of the unknown – but about two people who have grown so hostile and distant in their relationship that the mere thought of enduring lockdown together seems near impossible. Daldry, with co-director Justin Martin and superb performances from James McAvoy and Sharon Horgan as the unnamed couple, elevates the film beyond its conceit. While there’s some fear that using the pandemic as a storytelling structure will become commonplace, there might be value to be found if productions can at least offer some insight into the struggles of individuals rather than trying to encompass all the pandemic has meant to everyone everywhere.

Just as the quarantine begins in Britain, we watch as a couple unloads stockpiled groceries from their car, helped by their young son. Instead of simply observing, though, we’re asked to be active participants as the two – especially in the beginning – break the fourth wall to address some omnipresent third party in the room. The two can’t stand one another, having stayed together only for the sake of their son. From their political beliefs to the pronunciation of their son’s name, they can’t agree on anything, and everything from her lips to his way of eating drives the other mad with rage.

The pacing levels out and finds itself as the narrative jumps by months to some of the bigger moments of the pandemic. Be it losing loved ones or the instability of work or finally being able to get a vaccination, the film has no shortage of devastating blows to deliver. The film eases the tension to find time to expand on the greater issues going on outside the home that serves as the main stage for the entirety of the film. Moments of playfulness, flirtation and even of sheer understanding between the two filter in, allow the film to feel like more than just two awful people stuck under a roof together. The choreography between the two throughout each long take is particularly effective because it demonstrates a couple that is always in motion and often in sync with one another, even if that muscle memory defies their own emotional feelings. They grab one another’s plates and serve each other coffee, begrudgingly admit when the other is good at something and mourn one another’s losses.

McAvoy and Horgan do so much of the emotional heavy lifting that it’s tough to believe the film might’ve worked without them. Horgan, perhaps still best known for her comedy series “Catastrophe” with Rob Delaney, possesses a dry and acerbic delivery; her insults land like fire, crackling with everything she isn’t saying. McAvoy, meanwhile, is tremendous in his moments of taking up as much space as his frame and voice will allow as well as smaller, delicate moments of vulnerability. While their obvious chemistry is strong enough to allow us to believe that even if they haven’t lived in harmony the whole time, they’ve certainly lived together for a decade, their strongest moments are when the other steps back: For McAvoy, this comes in a speech brittle with rage in which he wonders how the government managed to mess up a predictable pandemic so badly; for Horgan, it’s an impassioned cry around whether the exponential rise in Covid cases is being acknowledged, and if the government has taken a “Dunkirk, stiff-upper-lip” approach to simply carry on and ignore the devastation the pandemic leaves in its wake.

Those speeches aside, along with one that ties everything up in the end, the script and length of the film are the main shortcomings. While there’s plenty to be said, it doesn’t mean everything needs to be. “Together” would have benefited from scaling down some of the bigger, more performative moments and allowing the emotions of the characters to live and breathe.

It may seem cheap on the surface to craft a story out of such immediate suffering, but luckily Daldry and company don’t hover too close to exploitation. For the most part, “Together” dodges the obvious missteps with a central relationship that makes for invigorating viewing regardless of the setting and its two committed and powerful lead performances.