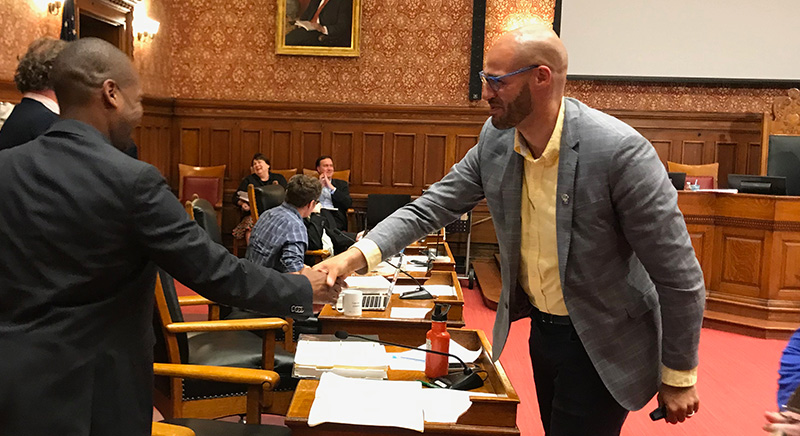 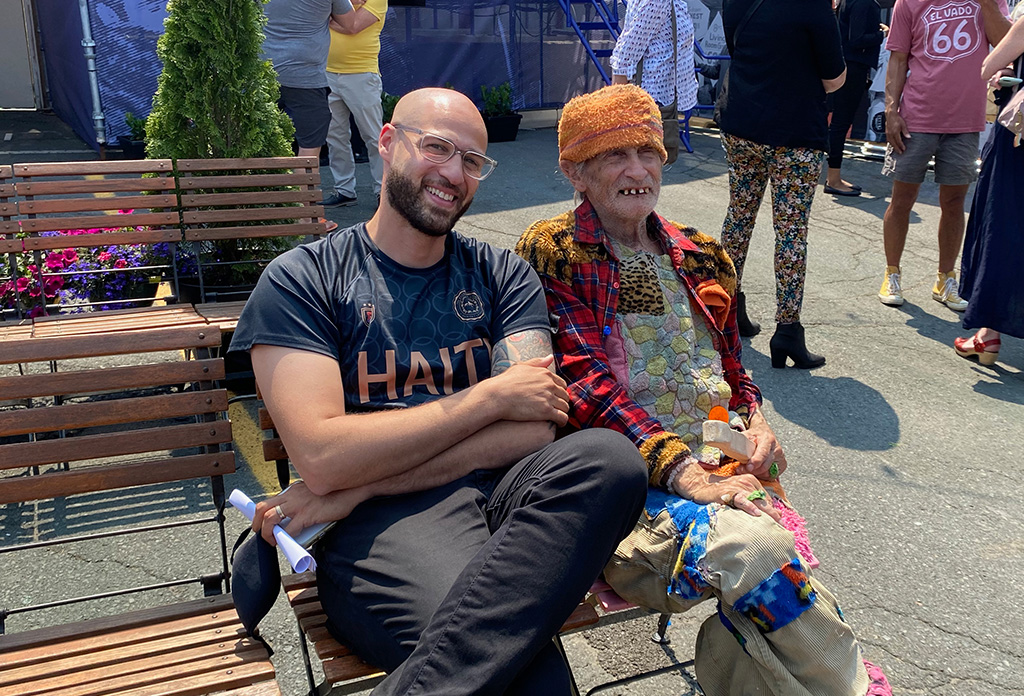 Michael Monestime, executive director of the Central Square Business Improvement District, left, sits in Starlight Square in May with Peter Valentine, who provided Monestime with the inspiration for the complex’s name. (Photo: Marc Levy)

Michael Monestime, who led Central Square into forming a business improvement district, faced down the economic effects of the coronavirus pandemic and created the Starlight Square complex, is leaving as executive director, according to a Monday email. He will take a role on the BID’s board of directors starting Jan. 1, and a transition committee will look for his replacement.

While not ready to say publicly what role convinced him to step away away from the executive director position, Monestime said: “This is not a ‘See you later.’ If you like what you saw in Central Square, get ready to see it in more locations [around Cambridge] with the same spirit, the same energy and the same creativity.” He now has “an awesome opportunity to continue working in a different fashion and stay very connection with the BID.”

When Monestime arrived in his leadership role in October 2016, it was as executive director of the Central Square Business Association, replacing the outgoing Robin Lapidus. One of his first initiatives was a Central Square Mural Project to refresh its famed public art with 30 new, socially relevant works. A lively weekly fair called the Central Flea attracted crowds under his leadership.

But the project that underlay all Monestime would try to do was legislative: re-forming as the Central Square Business Improvement District, funded by a fee added onto the property taxes of those within the district to keep the area cleaner, more welcoming and lively and become a stronger promoter of square arts and businesses – what he described as “place keeping over place making.” The BID won City Council approval in June 2019.

At least two earlier attempts at creating one had failed, as a minimum 60 percent of district property owners had to sign on to pay the fees. Monestime’s efforts over a year of public and private meetings got 71 percent to agree. “Michael Monestime has done something that for 30 years no one’s been able to do,” landlord Patrick Barrett said.

Starlight amid the coronavirus

When coronavirus and its restrictions arrived in early 2020, Monestime tackled it with a bigger staff – now 22 people, according to the BID – and his usual energy. His team created the Popportunity market for startup businesses and created outdoor dining blocks, enabling 15 restaurants to add 500 outside seats.

He also pulled together more than $1 million and city staff approvals to create Starlight Square, an urban amphitheater with socially distanced seating and a place for dining, community services and education. Though the concept was actually presented to the city before the coronavirus hit, according to district creative director Nina Berg, Starlight quickly became a lifeline for institutions that needed an outlet for members’ creativity, a way to keep businesses alive and to keep Cantabrigians active and sane.

In May, city officials indicated that Starlight Square is expected to outlast the pandemic and become a long-term part of Cambridge civic life.

Behind the scenes, he fought to keep the district thriving culturally, navigating pressures of development that might eliminate the arts and working on deals to keep the area’s institutions alive.

“His ability to tackle new challenges every day and his ability to execute have been an inspiring model of civic engagement,” said the Monday email from the current board of directors, praising the “can-do culture” he cultivated within the district. “It goes without saying that we are immensely proud of his leadership and the organization’s work … Michael’s work without a doubt has changed the face of Central Square. No block has been left untouched, unloved.”

“It is hard to remember Central Square before this tour de force,” the directors said.

Mayor Sumbul Siddiqui said Monday that Cambridge was “a better place because of the leadership of Michael Monestime and the work of the
Central Square BID,” and that she was glad that his work with the group would continue as a board member – and that she looked forward to seeing what he does next.

Monestime was already thinking about who would replace him, and said Monday that of course it would be someone intimate with Cambridge, though it didn’t have to be a resident. And he mentioned a factor that might not show up in a formal job description: The ideal candidate will be “not a suit,” Monestime said.