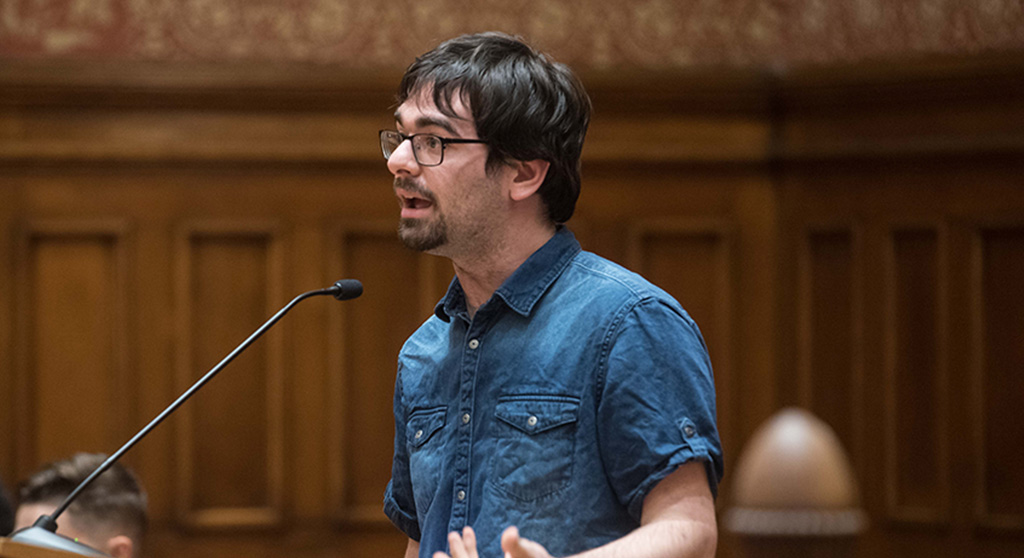 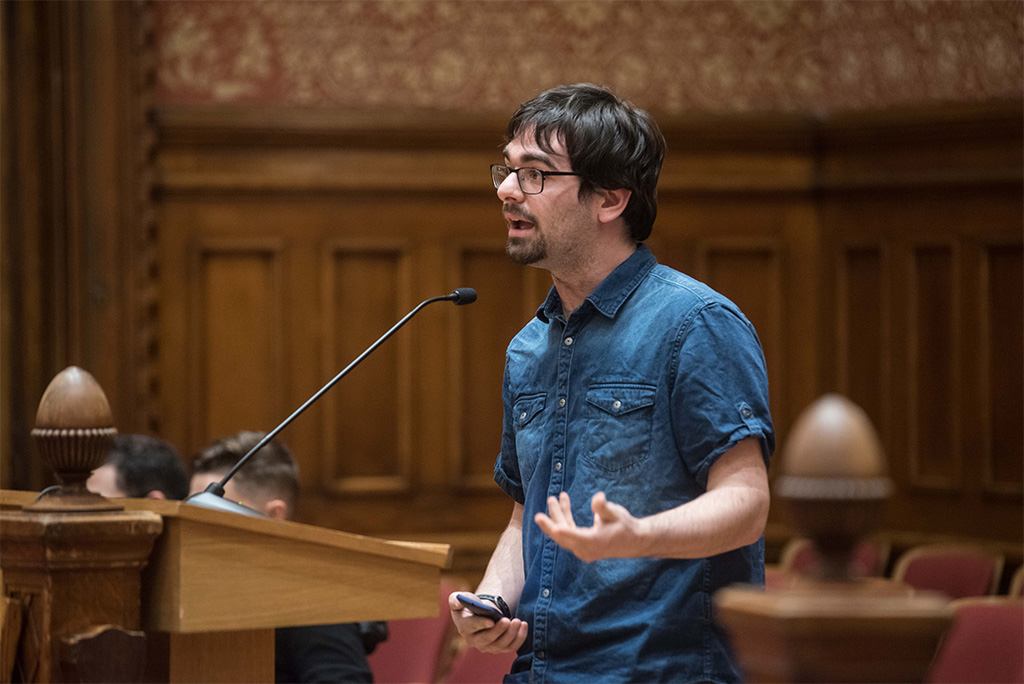 Allan Sadun, seen at a meeting in 2020, spoke Monday representing the group A Better Cambridge in supporting a rise in linkage fees for big commercial developments. (Photo: Derek Kouyoumjian)

Past debates over setting “linkage” fees for commercial development have divided the City Council into factions who want to push the limits and those who fear scaring off the builders who pay those fees.

There was no hint of division Monday as councillors sent off to committee a proposal to hike the fees to $33.34 per square foot this year from the current $20.10.

Councillors were unanimous in approving discussion of the proposed 66 percent increase.

“When we raised this the last time it was a pretty significant increase and there was some concern about not going too far because we were unsure as to what that would do – you know, where that breaking point was,” councillor Marc McGovern said. “I think it’s clear that we can go much higher than where we are, and that we need to.”

The idea behind the fee is to make up for resident displacement caused by the high-earning workers drawn by the offices or lab space created by these projects: The more space that’s built, the more people move to town and the more competition there is for existing housing stock, which raises prices. The fees apply to projects of 30,000 square feet or larger.

Unfortunately, the council left money on the table for around three decades. Linkage, also called incentive zoning, began in Cambridge in 1988 at a $3.28 rate. It was supposed to be revisited every three years – but went ignored until a reset in September 2015, losing an estimated $6 million and then slowing increases while councillors watched developer reaction. The steps up have been mainly a dollar or less annually.

The proposed rate is the maximum discussed in a 2019 study; proponents see anything short of that as Cambridge failing to get “the full affordable housing subsidy” during a crisis.

Yet a unanimous vote of councillors in 2015 set the rate at $12 per square foot, reviving the fee with a catch-up increase of more than 2.5 times but less than half the “maximum determined housing contribution rate” of $24.30 per square foot described in a so-called nexus rate-setting study. City staff counseled caution and some councillors agreed, hesitated to go higher for fear of chilling development. 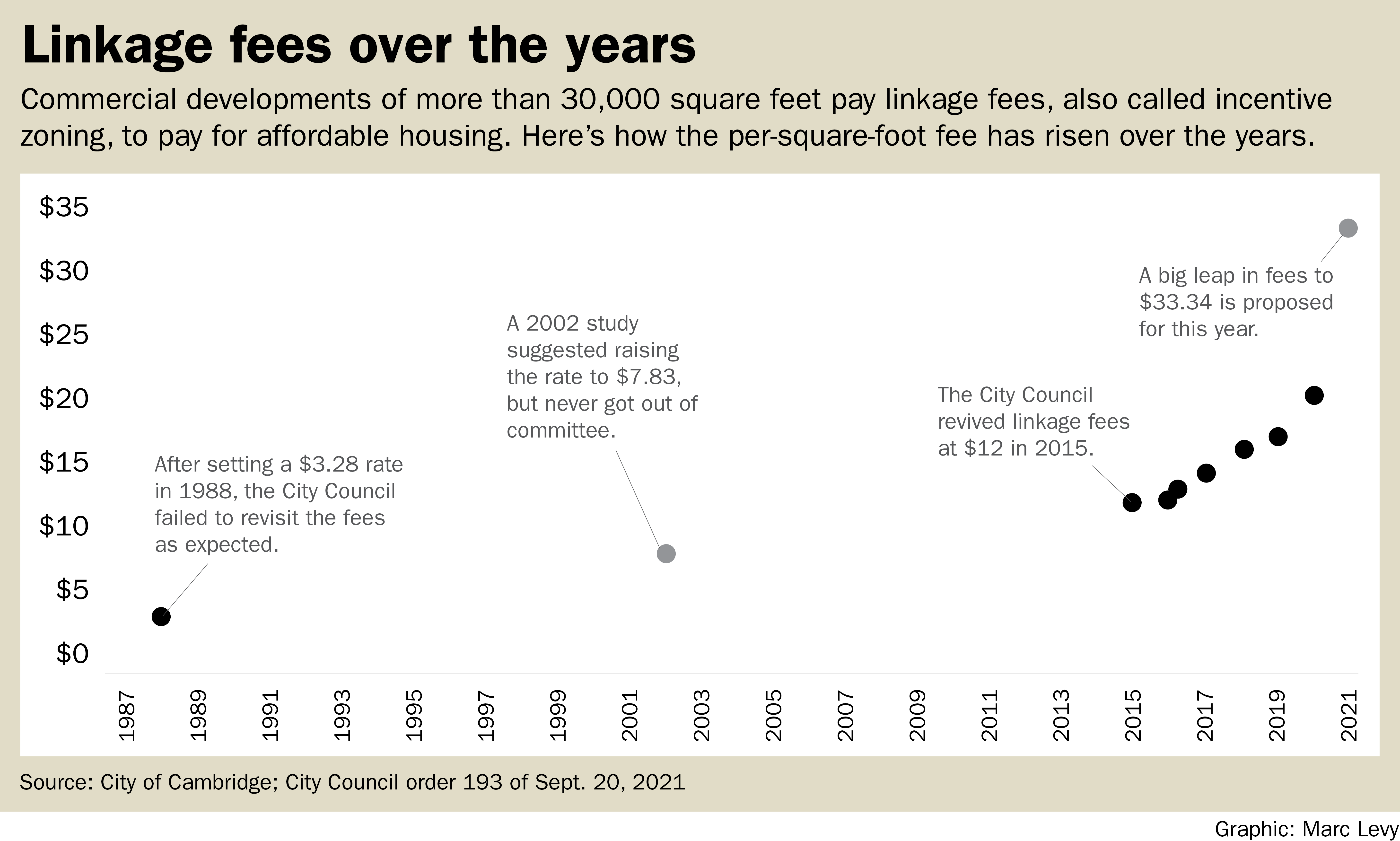 An updated study from 2019 was being read differently. “That study makes clear that to achieve the full amount [necessary] for low-, moderate- and middle-income workers who can’t afford to live in Cambridge, a subsidy is needed that comes out to a fee per square foot of $33.34. This is not enough to solve the crisis, and even the nexus study is based on development costs from 2019, which have gone up,” said councillor Jivan Sobrinho-Wheeler, who wrote the policy order calling for the $33.34-per-square-foot amount. “Raising the fee to the full amount in the study is something we can do to be a small step in the right direction.”

Councillor Dennis Carlone, a cosponsor of the order, referred to an even stronger step against displacement by workers: a growing call that developers be required to build housing, “because we can’t afford getting the land.”

“This is one step in that direction, but it is only one step,” Carlone said.

There was also universal support for the discussion during public comment, even from people who find themselves clashing over other development issues.

Among the eight speakers was Allan Sadun, representing the group A Better Cambridge. “With more than 8 million square feet of office, lab and retail space in the development pipeline, it’s clear that Cambridge remains highly competitive for new development, especially for large projects in Kendall Square and Alewife,” Sadun said, referring to more than 1.6 million square feet of office and retail space given permits just since June 2020. “If this change had been in place over the past year, that would have meant an additional $21 million in affordable housing funds.”

Lee Farris, representing the Cambridge Residents Alliance, said the 2019 study actually suggested an even higher figure than Monday’s policy order proposed: To get the $241.7 million needed for the study’s base amount of units that should be built to prevent residents with low- and moderate-income from being displaced, the full rate would be $55.27 per square foot. Federal and state housing funding “in effect provides a discount to commercial developers, which has allowed them to increase their profit while reducing the total amount of funds going into the Affordable Housing Trust,” she said.

The proposed $33.34 should be treated as a minimum, with gradual increases of roughly $4.40 per square foot over the next five years to reach the full $55.27, Farris said.