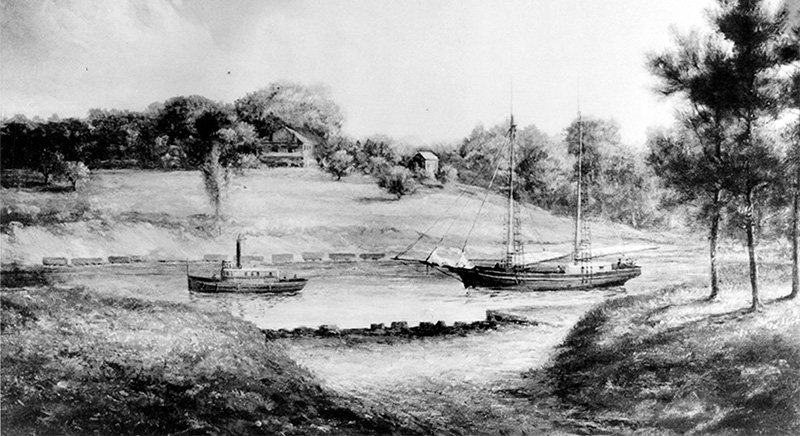 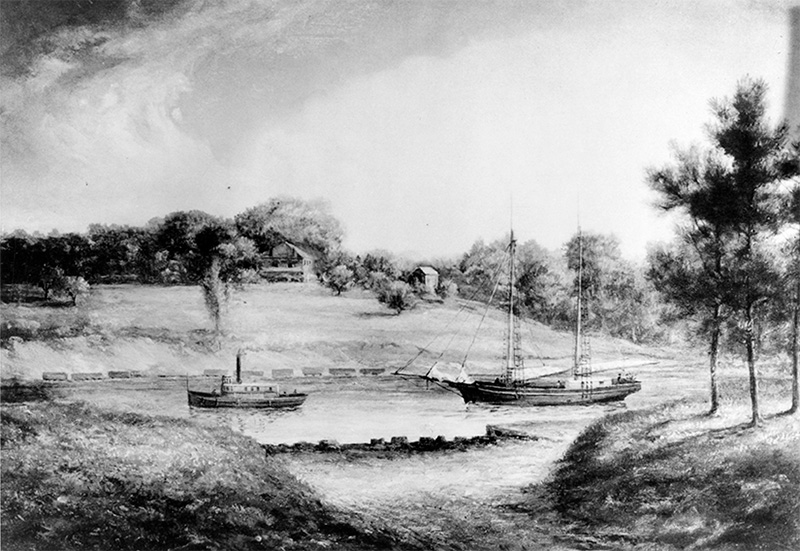 “On the Banks of the Charles River, Cambridgeport, Massachusetts,” by John W. A. Scott (1850s), from “A History of American Marine Painting” by John Wilmerding. (Photo: Cambridge Historical Commission)

An early 20th century photograph of the schooner Henry Endicott heading up the Charles River toward the Broad Canal stands as evidence that there was a time when the “port” in “Cambridgeport” had real meaning.

The Henry Endicott was a 192-foot, three-masted schooner built in Bath, Maine, in 1908, for the Cambridge Electric Light Co. and named for the president of the Cambridgeport Savings Bank. It was already an anachronism, for by that time barges had become easier to build and operate and a tug could tow a string of barges needing less crew. But as a schooner-barge, it survived as a coastal workhorse until Sept. 18, 1939.

According to an account from the Massachusetts Coastal Zone Management, the Henry Endicott had loaded paving blocks from quarries on Vinalhaven Island, Maine, and along with two other barges – perhaps other time-gone-by schooners – was taken in tow by a tug bound for New York. But off Plymouth’s Manomet Point, “heavy seas parted the towline and opened its seams.” The crew, after firing distress rockets, abandoned ship. Before help could arrive, the schooner had sunk in some 80 feet of water. It is now listed by the agency as a recreational diving site.

The story of the Henry Endicott could stand as the story of the original Port itself, for when Cambridgeport was designed at a “United States port of delivery” in 1805, it was also a victim of very bad timing. Work began on the Broad Canal in 1806, but just a year later, President Thomas Jefferson declared an embargo on trade with Britain as relations with the old mother country soured. Then came war with Britain in 1812, and by the time it ended in 1815, the world of maritime commerce had moved on.

But not entirely, as long as the port was willing to accept its fate as a workaday port for coastal schooners and barges. The Broad Canal remained accessible to masted vessels even after the draw on the Longfellow Bridge just upstream was closed in June 1904 – not always without problems. The three-masted schooner Sedgewick, which had delivered its cargo and was riding high as it returned downstream near high tide, got stuck in the Craigie Bridge’s draw in October 1907. Traffic backed up, with the teamsters attempting to turn their horses just around adding to the jam. Neither additional tugs nor a Boston & Maine locomotive on a railroad bridge were able to free the schooner, and as often happens along the coast, all had to wait until the tide turned. Canals can still have their problems, as the world was reminded when the container ship Ever Given blocked the Suez Canal for six days in March.

Before the Longfellow draw was closed, a two-masted schooner ran aground off Magazine Beach in November 1902. According to the Cambridge Chronicle, “it was running close to the Cambridge shore and when it struck bottom it struck hard.” Tugs were unable to free it until its cargo of 1,140 tons of coal for the Cambridge Electric Light plant at Western Avenue was offloaded and the schooner was floated and towed away.

The wharves along the Broad Canal continued to be used by lumber and coal firms such as the Page wooden box company near present-day Kendall Square. That was “a different kind of use,” as the Cambridgeport Survey of Architectural History put it, “from that envisioned by the early port developers, who had in mind international trade rather than the coastwise shipping of wholesale lots of bulky material.”

And bit by bit, even the canal that had once reached (with a dogleg) as far as Miller’s River was shortened and filled in, leaving only today’s stump that serves, in season, as a site for kayak and canoe rentals.