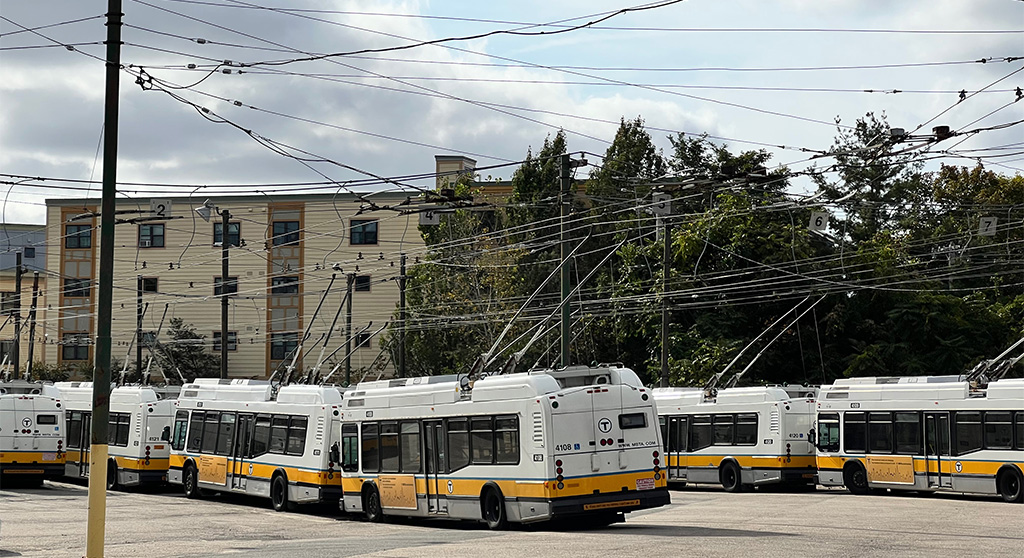 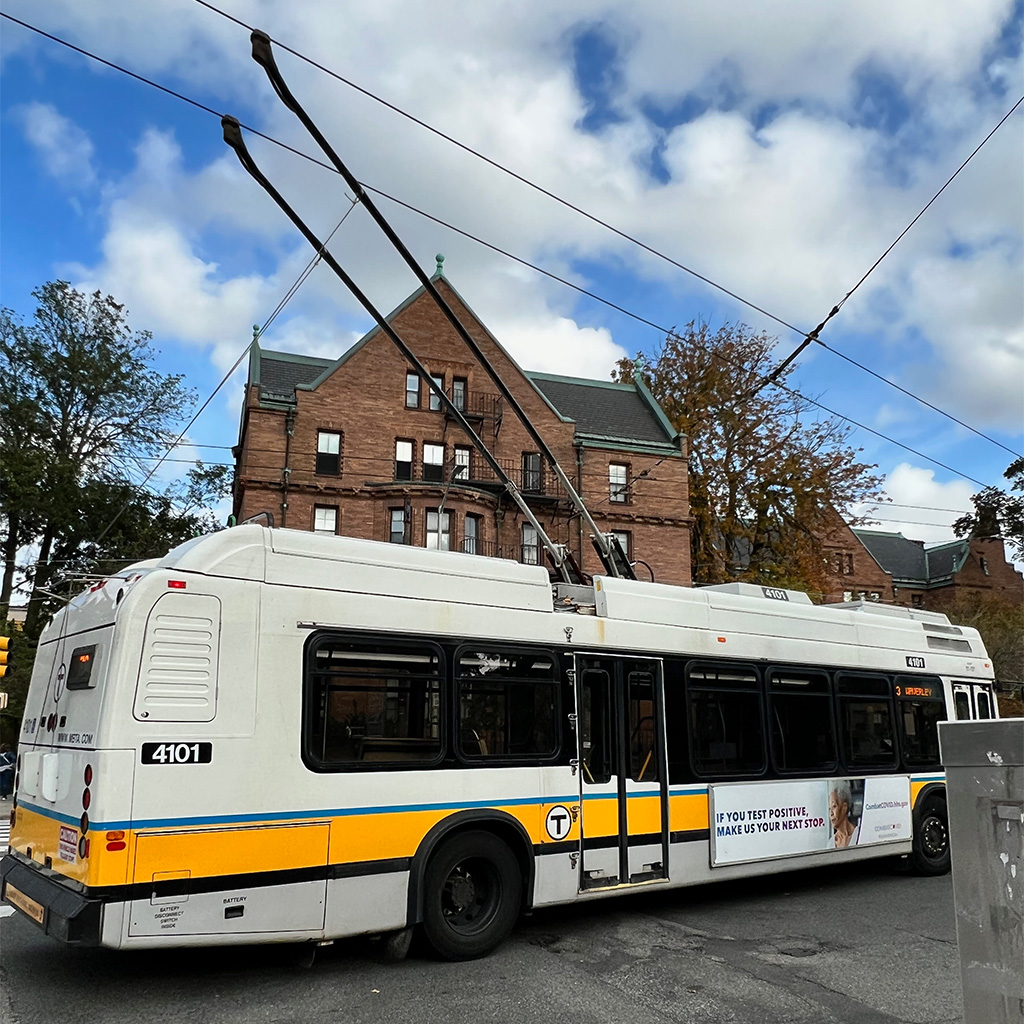 The overhead catenary wires that power the 71 and 73 bus routes in North Cambridge are expected to be gone by 2024 in plans released by the state, made obsolete by battery-electric buses that rely on charging depots for power. The plans have come under scrutiny by transit activists who question why the Massachusetts Bay Transportation Authority is prioritizing replacing existing electrified routes when the vast majority of the bus network in disadvantaged communities is still highly reliant on fossil fuels.

Angel Donahue-Rodriguez, the MBTA’s deputy chief of staff, noted that the existing fleet that uses the catenary wires is 17 years old, which puts it “beyond useful life.” In addition, keeping the current 28 buses would make them incompatible with the rest of a fully electrified 1,150-bus network – an unwanted complication for an agency that already can’t move trains from one line to another because
they’re all different sizes. “A more homogeneous fleet will allow us to support more reliability and give us more predictability in maintenance,” Donahue-Rodriguez said at an Aug. 25 meeting organized by state Reps. Steve Owens and Dave Rogers and state Sens. Will Brownsberger and Pat Jehlen.

Switching to battery-based electric buses will require retrofitting existing facilities to give the vehicles a place to charge. The MBTA envisions converting the facility on Massachusetts Avenue near Davis Square into a battery-electric-bus depot that could handle 35 buses’ charging needs, with construction starting in the fall of 2022 and ending by December 2023 when the new electric buses would go into service.

A retrofit at the Arborway facility in Jamaica Plain would have capacity for approximately 200 battery-electric buses, though the timeline there is aligned with plans to phase out natural-gas-based buses in 2028. A depot in Quincy opening in 2024 would support 120 vehicles and be the first indoor bus facility.

Plans for the indoor facility point to a complication in the MBTA’s plans to meet its climate change goal of a “zero-emissions bus fleet”: The harsh winter weather reduces the range of battery-electric buses by up to 50 percent, which means “supplemental diesel interior heaters are necessary for the success of MBTA’s first large deployments,” said Joe Pesaturo, an MBTA spokesperson, in an email exchange. Just how much diesel will be burned by the buses – and how much the heaters will set back agency climate goals – is largely unknown, as the first buses outfitted with auxiliary heaters will run for the first time this winter. 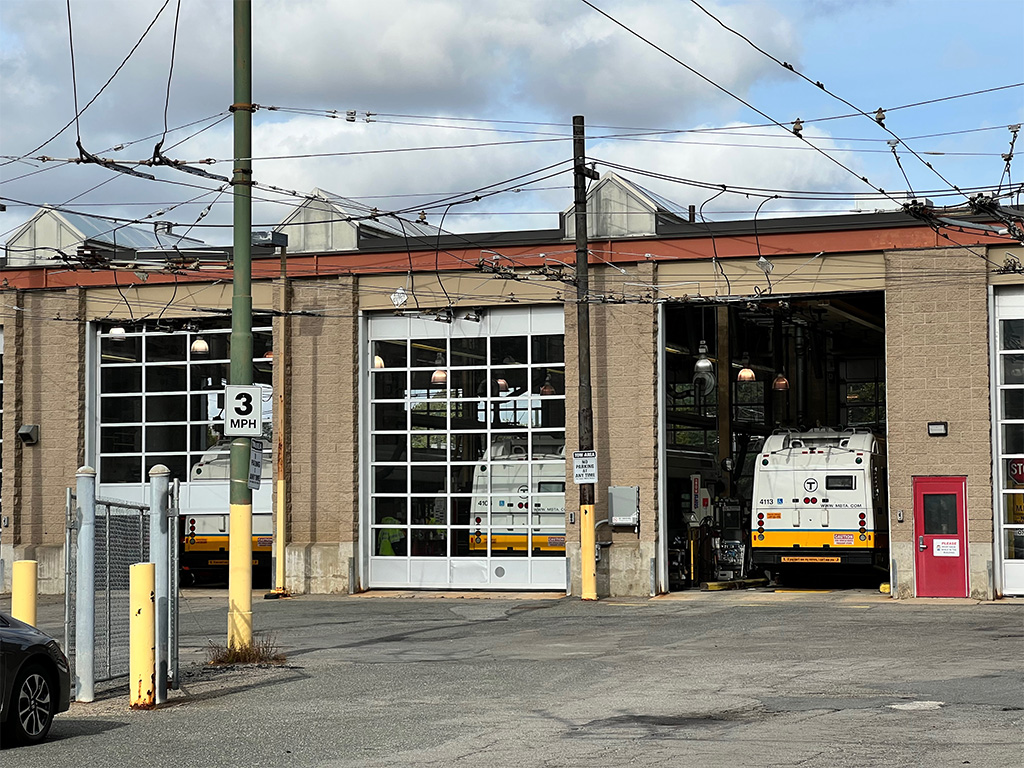 The MBTA plans to convert its facility on Massachusetts Avenue in North Cambridge into an electric charging station for buses. (Photo: Mike Gajda)

But the heaters are a stopgap solution that the “T envisions phasing out … as more is learned from these large-scale deployments, operational changes are made and charging networks are developed,” Pesaturo said. Buses will be testing the heaters at least over the next two years.

The operational challenges, coupled with longer wait times for electric facilities in communities with environmental justice concerns, raise questions for the advocacy group TransitMatters. ​“Is this the best use of the MBTA’s limited time and resources, when there are greater needs elsewhere?” said Jarred Johnson, the group’s director, in a phone interview on Wednesday.

TransitMatters prefers a mix of solutions for the electrification of the MBTA’s bus fleet, including updating and extending the existing catenary wire network. A new generation of catenary-compatible buses is being piloted in other cities that could charge off overhead wires, then run for up to 22 miles on battery, Johnson noted. He called the plan to standardize every bus in the network “bizarre,” given that few transit agencies take a “one size fits all” approach to their fleets.

The MBTA, in contrast, sees the next three years as an opportunity to remove the catenary wire network permanently while municipal work in Cambridge and Watertown requires switching the 71 and 73 routes to diesel buses anyway. While the agency acknowledges cities such as San Francisco are doubling down on catenary-based solutions, Donahue-Rodriguez rejected the premise that the strategy should be implemented here. “Our goal here is to have a homogeneous fleet,” he said.

Designs for North Cambridge aren’t set to be finalized until mid-2022, giving Johnson hope that the MBTA will reconsider plans that currently “show equity isn’t a priority.”

Bus electrification plans are here. People with comments about plans for North Cambridge can send email to engineering@mbta.com.