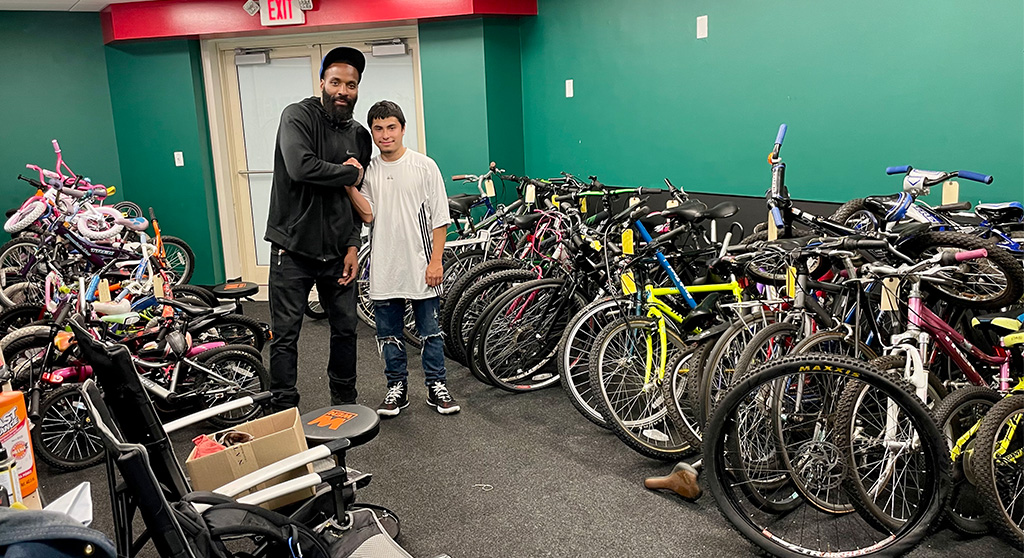 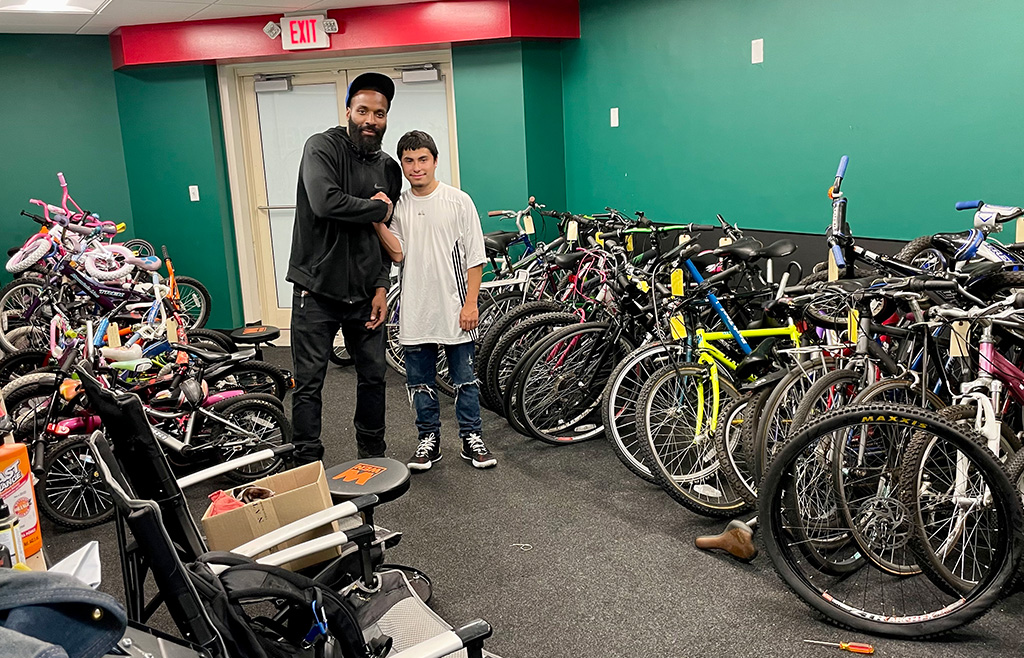 Lonnell Wells in his CambridgeSide mall Bike Give Back space with an organization intern. (Photo: Tom Meek )

A year ago we cast the spotlight on efforts by bicyclists to help those at risk from Covid-19 and to confront racism. Those ills persist, but so does the work by the Bike Delivery Program and the tight-knit team behind the Cambridge Bike Give Back initiative. Each mission has been sustained by the toil and generosity of volunteers, but now could use a lending hand.

The Cambridge Bike Give Back initiative, which takes old and unwanted bikes and retools them for those in need, was launched in August 2020 by Lonnell Wells and friends in reaction to the murder of George Floyd. It gives bicycles to kids who might not otherwise have one to ride with friends, or a person just out of prison needing an inexpensive way to get around in their reentry to society, Wells said. The program now has a storefront in the Cambridgeside mall parking garage. Vice mayor Alanna Mallon and former mayor Anthony Galluccio helped broker the arrangement, Wells said, and his sources for steel steeds has grown too. He’s reached out to municipal and collegiate police forces for unclaimed bikes and forged a partnership with Bikes Not Bombs, the original bike-driven social activist group down in Jamaica Plain.

The Give Back program has provided more than 350 bikes since its founding last year, Wells said, in addition to hosting community barbecues and sponsoring a Black Lives Matter ride around Cambridge.

The program plans a family-themed Halloween party from 1 to 4 p.m. Oct. 24 at the Greene-Rose Heritage Park in The Port neighborhood. There will be a costume contest, games and candy for kids, free food for all and a raffle; bikes will be given away, and bike tuneups offered. (Organizers are looking for able bike mechanics to help on Sunday. If you have a bike you want to unload, they could use that, too. Email cambridgikegiveback@gmail.com.) 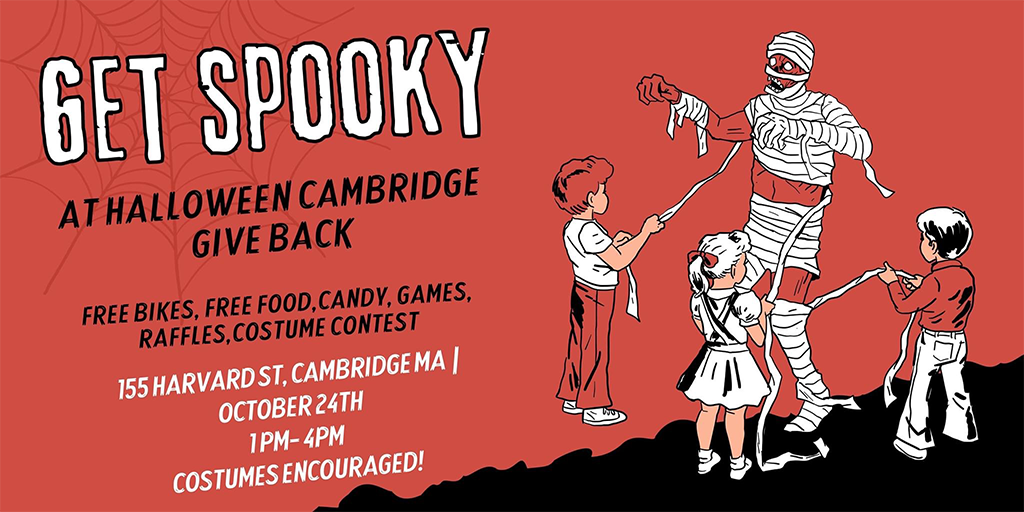 Food for all, delivered cleanly

Food insecurity increased sharply during the pandemic and remains a major problem. The Bike Delivery Program helps by making twice-weekly deliveries of food (vegetables, potatoes, bread, dairy and other basic kitchen staples) by cyclists from the front of the Agassiz Baldwin Community Center to dozens of residents citywide who are either elderly, don’t have a car or have physical limitations.

Cyclists also sign up to distribute food dropped off several times a week by Food For Free and other nonprofits to the Cambridge Community Center in the Riverside neighborhood. It goes from there to four community refrigerator sites: two in Harvard Square, one in The Port and another in Somerville. The refrigerators are cleaned, maintained and run by volunteer organizations to keep the food in them available to anyone. (People with unwanted food that is still good and sealed can drop it off at any of the four sites, most of which have a fridge and a dry pantry shed for canned and dry goods.) 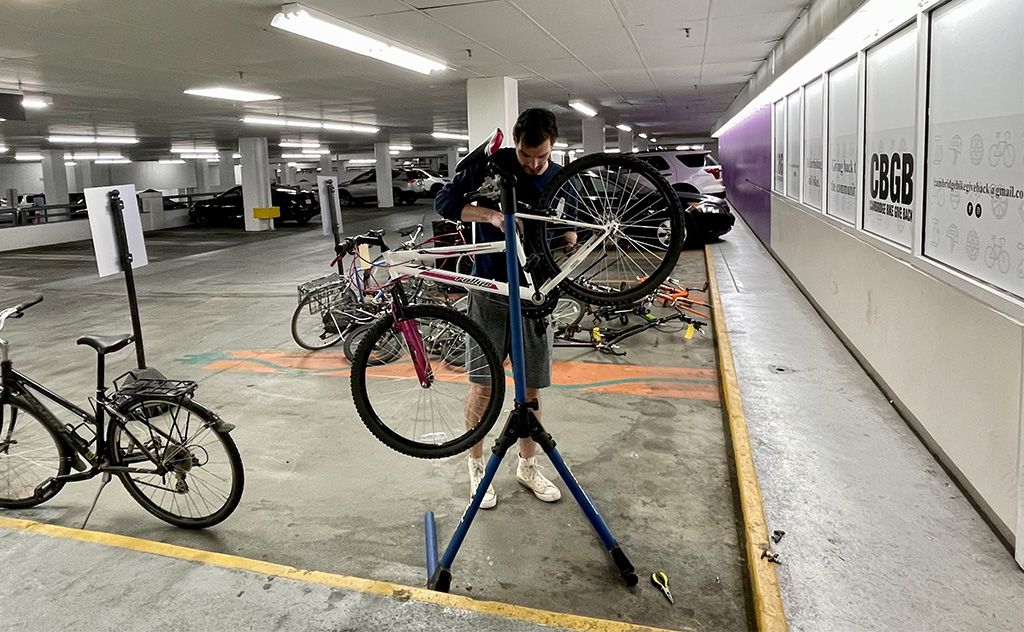 A Cambridge Bike Give Back volunteer works on a bike at the organization’s space in the CambridgeSide mall parking garage. (Photo: Tom Meek)

The Bike Delivery Program was launched in part by the collaborative behind the Cambridge Bicycle Safety group, which maintains a signup portal suggesting that volunteer riders have made more than 1,600 deliveries since launch during the pandemic. The effort could use more pedalers, organizers said, since a return to offices after the coronavirus lockdown caused some regulars to drop out due to schedule challenges. A box of produce can weigh more than 30 pounds, so having a bicycle trailer, a weight-bearing rack or a high-capacity courier bag is essential; some people have offered the use of cars, which has been turned down.

“Although we often have a car volunteer or two, it’s important to us to be thoughtful about the environmental and traffic impacts of adding more vehicle trips,” said Phoebe Sinclair, one of the Agassiz Baldwin Community Center organizers. “Bikes are great because not only can the riders deliver swiftly without worrying about parking or vehicle traffic, they are also role models, inspiring people who are curious to bike. Our bike volunteers range from kids with parents to people in their 70s and maybe even older.”

This post was updated Oct. 15, 2021, to correct the identity of a person in a photo: an intern, not a customer.