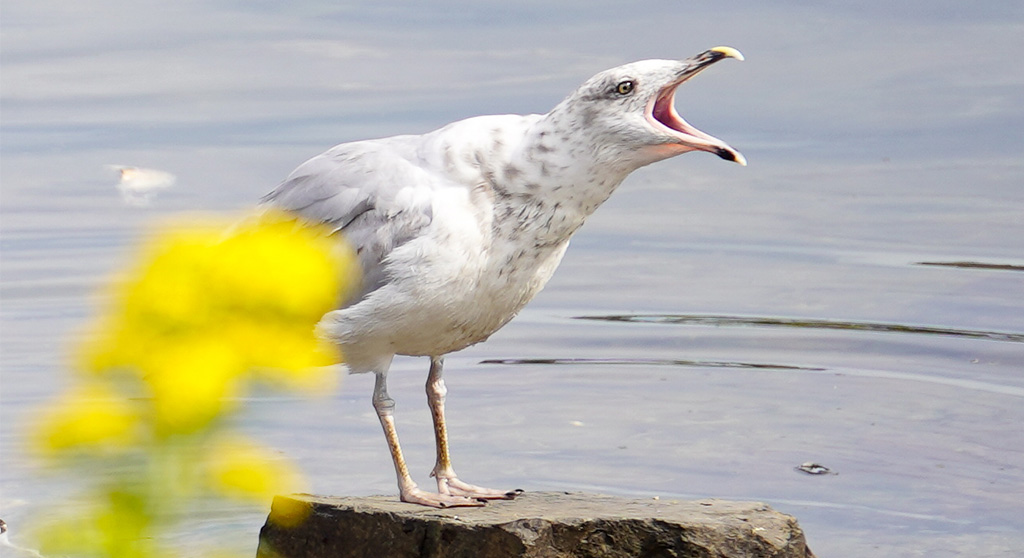 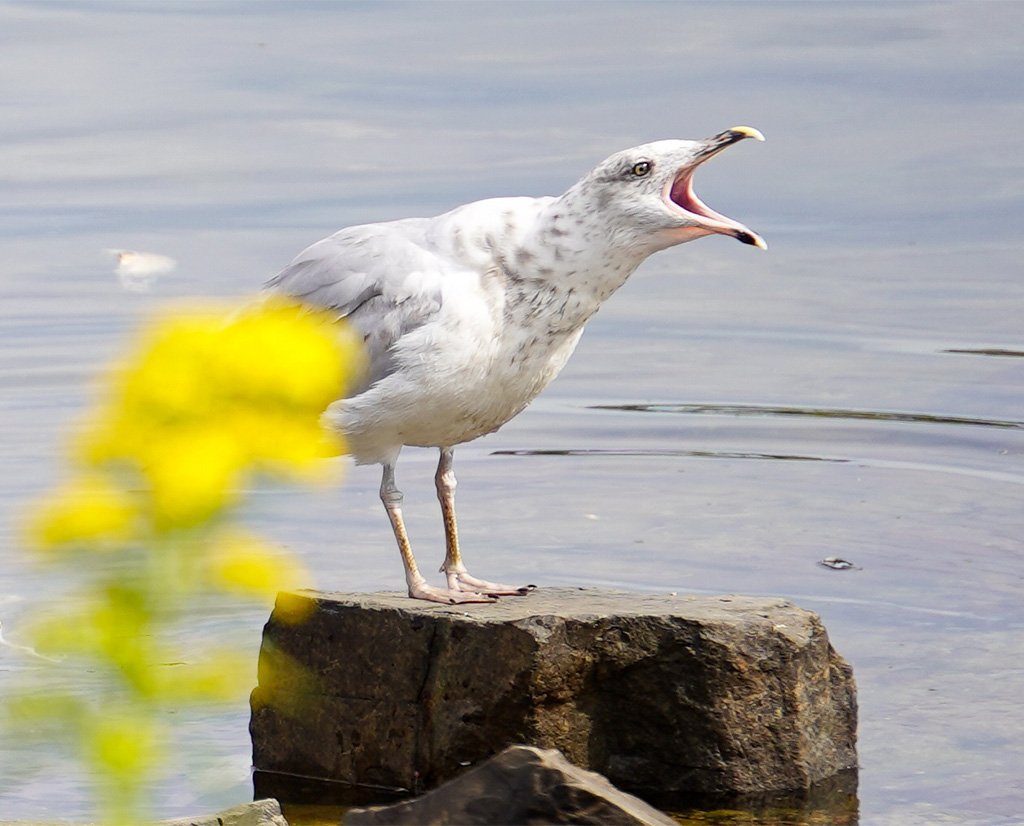 The American herring gull (Larus argentatus smithsonianus) is the most common gull in North America. It is a kleptoparasite, which means it will steal your sandwich at the beach or steal french fries from parking lots or it will steal fish from other birds. It does kill prey, but often feasts on dead fish or road kill, food waste in dumpsters and fish waste at fisheries and canneries. These gulls are smart and adapt readily to changing circumstances: They have been known to hunt rabbits by hovering above a burrow exit until the rabbit emerges; they carry mollusks high into the air and drop them on hard surfaces to crack open the shells.

Once abundant, this bird was rare by the 1900s, as egg hunters gathered wild bird eggs to sell at markets and milliners used bird feathers in women’s hats. Then these activities became illegal, and open garbage dumps began to proliferate. In the 1970s and 1980s, the fishing industry discarded large quantities of offal from their catches, leading to a surge in the gull population as birds feasted on the waste. Today, because of overharvesting of fish stocks and changes in fishing habits, there are fewer fish for gulls to eat, pushing them to find food in other locations. Gull populations have been declining since the 1980s. It is not known how small the population can get while still remaining stable and healthy. As development increases along our shorelines, people squeeze gulls out of their original habitat and it remains to be seen where gulls will end up. Sea level rise due to climate change also threatens the future of this species.

In the 1800s and 1900s, herring gulls migrated through Massachusetts to get to and from their breeding grounds in Canada. They were common in Massachusetts only in the spring and fall. In 1912, the first known pair of breeding herring gulls found a home on Martha’s Vineyard. In the 1940s, their numbers skyrocketed to 36,000 breeding pairs. Today, herring gulls are common year-round. Surveys from the state Natural Heritage and Endangered Species Program found that from 1995 to 2008, the number of breeding pairs has declined by 42 percent.

In Ocean City, New Jersey, these gulls have become such an annoyance that the city spends $250,000 each summer to have a falconer release hawks, falcons and owls to scare away the herring gulls from the boardwalks and outdoor dining areas. The pandemic, too, has forced gulls to change their habits. Gulls that had once relied on tourist handouts had to search for food from other sources. Gulls in Rome, for example, started feeding on rats and pigeons during Covid lockdowns. (YouTube has many videos of gulls eating rats, rabbits and pigeons if you are so inclined to investigate. Gulls are probably not the answer to our rat problem, but here a gull in London devours a rat in one gulp.) 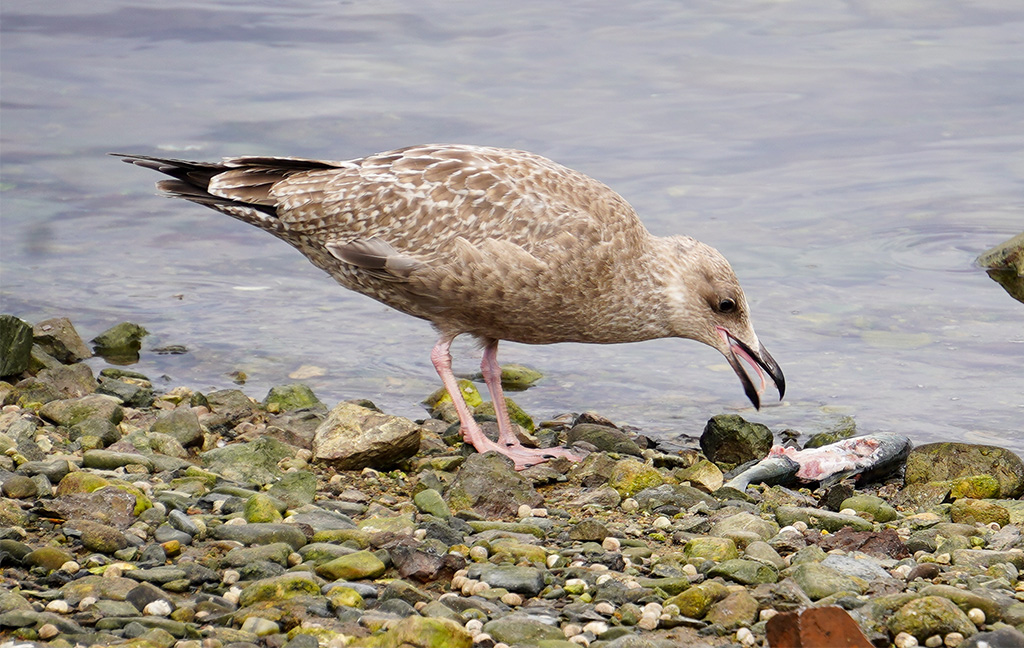 An adult herring gull has a gray back, gray wings and a white head. The legs are light pink, and the bill is yellow with a red spot on the bottom near the tip. Newly hatched chicks instinctively peck at this spot on a parent’s bill, which signals to the adult that the chick needs to be fed. Immature birds have brownish markings and a dark tail. It takes four years for a juvenile bird to acquire its adult white color. Often flocks of youngsters, watched over by a few adult males, stay together until they are old enough to breed. 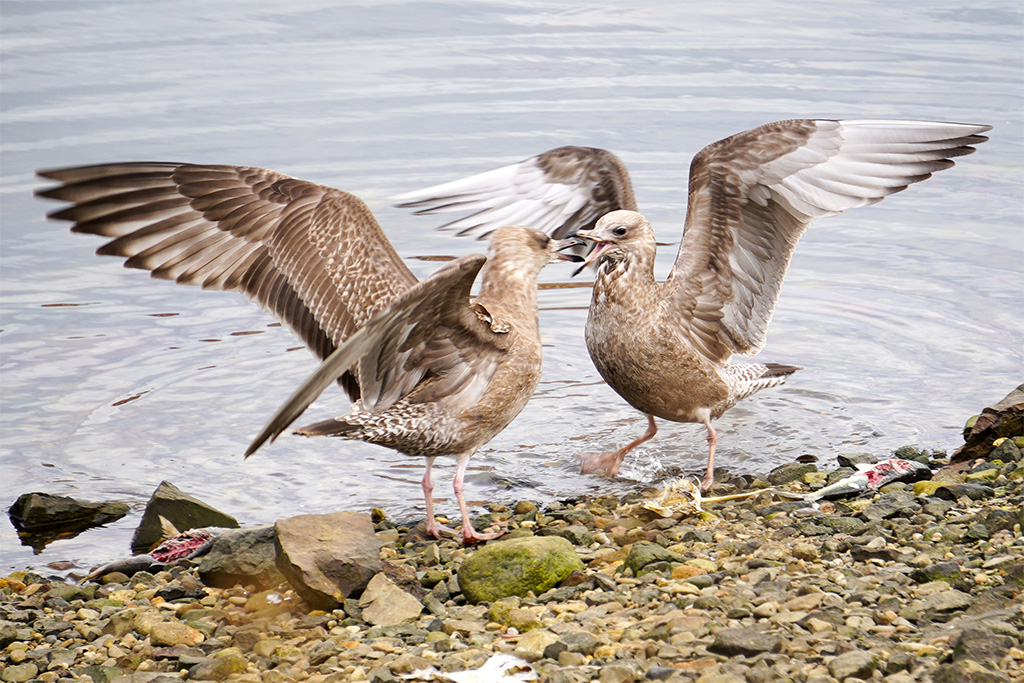