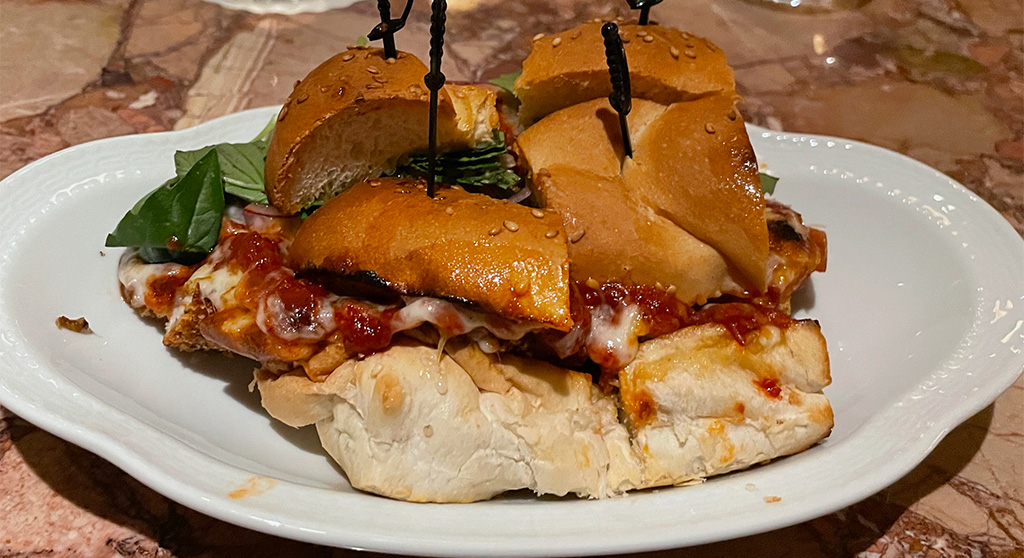 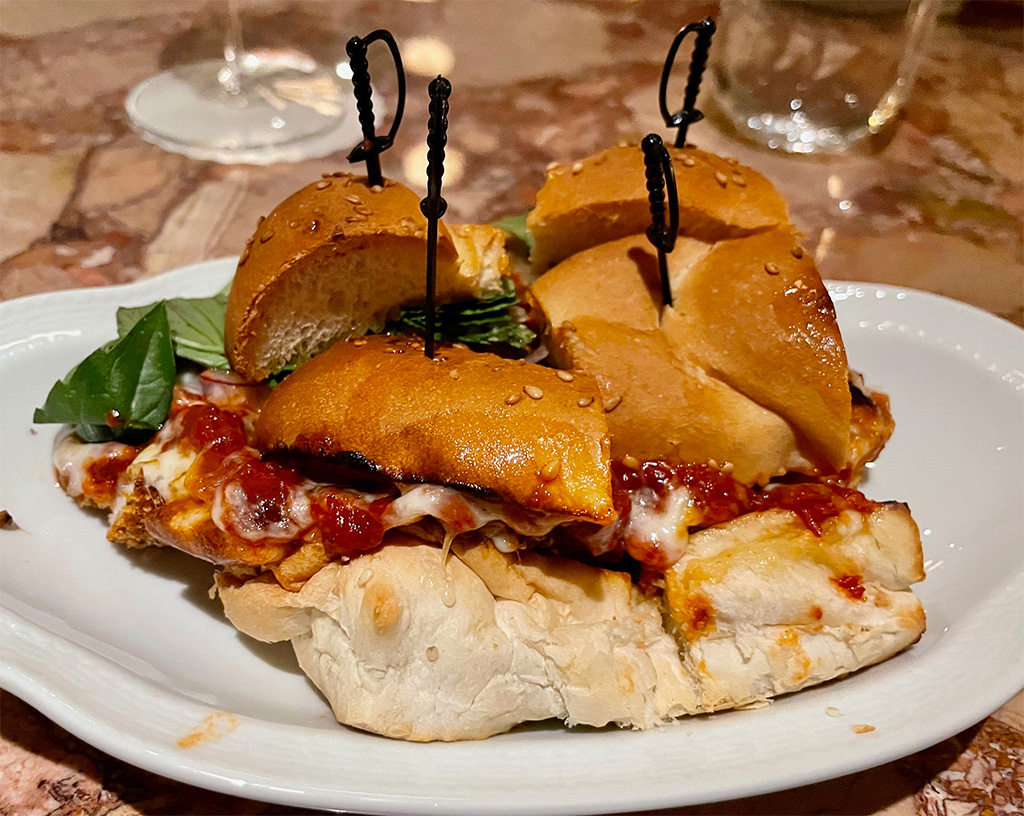 The space in The Charles Hotel that was for so long Rialto and, for a blip, Benedetto reopened Sept. 25 as Bar Enza, another fine-dining establishment with an Italian lean. It’s headed by Michelin-starred chef Mark Ladner, a Belmont native who cut his teeth at Todd English’s Olives in Charlestown before making his mark in New York City.

Bar Enza is a big, inviting space with an inviting amber glow that fits the hotel setting. The wine list is tight and tasty, as are the cocktail selections, and the menu is substantial and unique and does a lot to leverage local connections. Fresh basil comes from the farmers market outside at Charles Square; the pork for the Meatball Gigante – a pork, beef and veal meatball the size of a softball – and the barbecue sauce mixed with the tomato sugo comes from Andy Husband’s Smoke Shop, with a storefront just around the corner. Hi-Rise Bread Co. provides the stretched-out miniciabatta loaves for dipping into mascarpone, olio nuevo and Sorrento lemon, which diners are raving about. Other things that intrigue from the menu are the Angry Lobster Raviolo primi, which (similar to that meatball) is one gigantic square of lobster ravioli topped with spicy Calabrian pepper spread and garlic chives; and the antipasti Lean Tuna Carpaccio with crushed cucumber, salsa verde and onion rings, and Fried Calamari served “Atwells Avenue style” with cherry peppers, capers and a side of garlic butter. I had the latter and loved the tenderness of the nuggets and the spiciness of the cherry peppers, though I wanted a marinara sauce instead of butter for dipping. 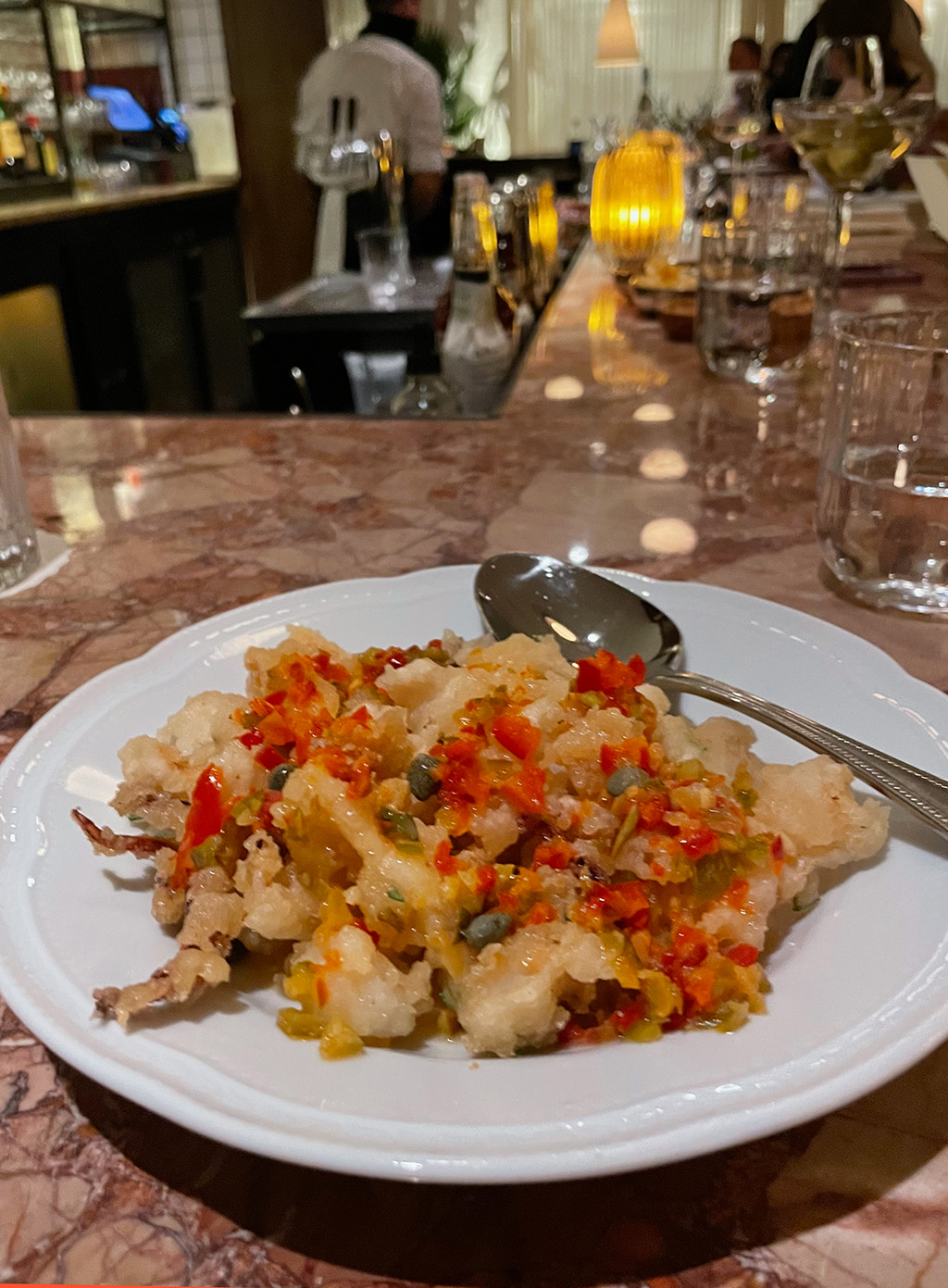 The thing I had that wasn’t on the menu – it’s a secret ask – was the Ladner take on chicken parm. It was a game changer. The pounded-out poultry is lightly breaded and flash fried so it’s tender, moist and flavorful inside. The key is the tangy tomato jam, an old-school marinara with a zing, and the bounty of fresh basil crowning it all on a semolina roll. Cut into quarters, it doesn’t look like art when it arrives, but going down it’s something else, something old and something new and perhaps the best chicken parm you’ll ever have.

Next time I’m getting the calamari with a side of tomato jam. I really want to try that big ol’ ravioli too, but I’m not sure I could leave Enza without that parm.