‘tick, tick … Boom!’: The insufferable theater kid who just happened to be the genius behind ‘Rent’ 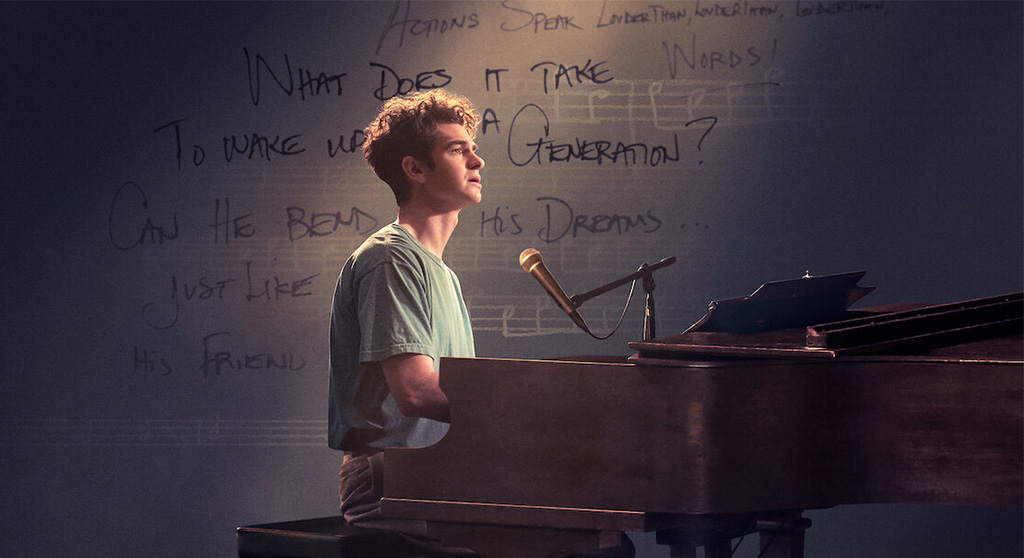 ‘tick, tick … Boom!’: The insufferable theater kid who just happened to be the genius behind ‘Rent’

In his directorial debut, ”Hamilton” creator Lin-Manuel Miranda adapts a musical written by “Rent” scribe Jonathan Larson, “tick, tick … Boom!,” chronicling Larson’s own life on the cusp of his 30th birthday. A document of career frustrations for a promising young theater composer, the story observes him navigating love, friendship and the pressures of life as an artist in New York City. It’s bookended with notes that contextualize the rest of Larson’s life, detailing how despite failures he’d go on to find success with “Rent” – but die tragically young at 35 on the day of its premiere. The film is clearly in awe of Larson, but that admiration doesn’t always amount to something polished.

Andrew Garfield, playing Larson, is a shockingly good singer, and if we were to base the film only on his best moments, it would largely have been a victory. He’s endlessly winsome and charming, and this performance inspires the want for further musicals in his future. The relationship between him and his best friend Michael (Robin de Jesús) is also the most believable dynamic in the film, with the two of them acting circles around the others – and the film itself.

Perhaps its greatest element, aside from Garfield’s committed and charismatic performance, is the fact that it’s actually trying to bring the theatrics of theater to film – something that’s been lacking in many modern musicals where filmmakers fear the ridiculous and play it safe. Or worse, try to play it too “real.”

Unfortunately, much of the film is frantic for the sake of being frenzied – trying to emulate the caffeinated, live-wire energy of its protagonist, which results in messy editing and cloying directional decisions. Starting out strong with the number “30/90,” Miranda at first seems poised to have taken on the challenge well. Soon we realize that it’s simply the best number in the film.

There are moments of cohesion and surprising revelations that manage to momentarily assuage the headache the film causes. Whenever the film focuses on the artistic and creative process, it inches as close as it can to being a well-dissected portrait of a complicated creator and the work-for-the-sake-of-creation-only mentality so many well-to-do artists wear like a badge of honor. For good and for bad, Jonathan is always thinking ahead to his next number. That might be a bad day at the restaurant he works at as a waiter, where noted Broadway talents flounce onscreen for a throwaway number, or a much more painfully real moment when his girlfriend realizes he’s already orchestrating how he might use his current lovers’ spat as a song.

Miranda and screenwriter Steven Levenson do their best to avoid being blinded by Larson’s talent, which would mean ignoring some of the more grating elements of his character. Though “Rent” makes the eventual argument that his arrogance is earned, Larson – like many artists today – doesn’t always account for the privilege he’s been given, and the moments when he’s called out for his sanctimonious behavior are gratifying.  But “tick, tick … Boom!” accentuates Larson’s flaws only in bursts. Too often, Miranda is caught up and starry-eyed; the eccentricities of Larson’s work have clearly been an influence on Miranda’s own songwriting.

The result is a technically faulty project that makes the involvement and choices of first-time filmmaker Miranda all the more indulgent. The film wants to be everything. In all fairness, that is kind of what “Rent” was – everything and the kitchen sink – but in this case, the mess and excess weight causes the foundation of the story to crumble.

It’s another example of how the best intentions don’t always make for the best storytelling. And like the man whose story he’s telling, it’s going to take Miranda more than one spin in the director’s chair to demonstrate his potential.