‘House of Gucci’: The styles clash in family drama 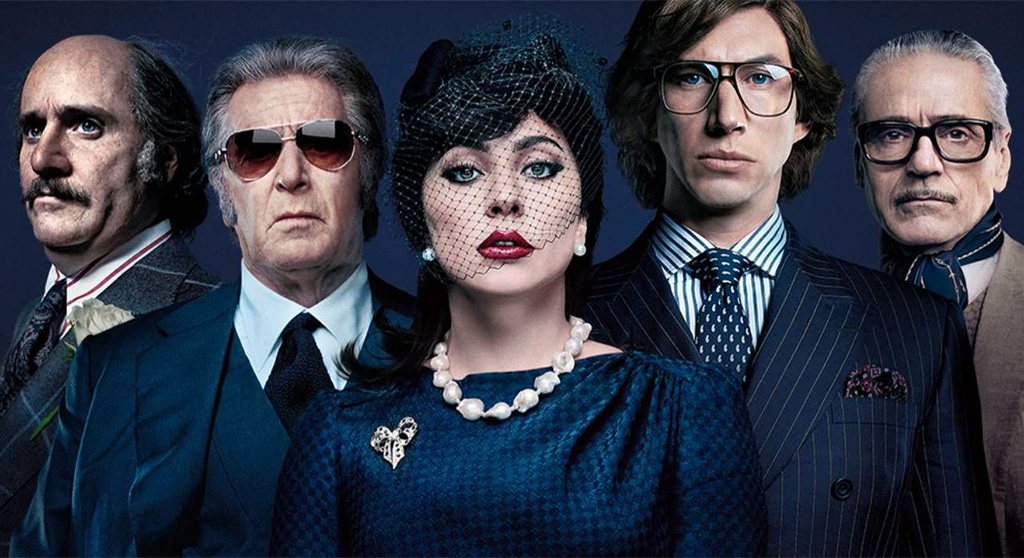 ‘House of Gucci’: The styles clash in family drama

Ridley Scott’s “House of Gucci” unfurls like an epic crime saga – think “The Godfather” (1972) by way of the hit streaming series “Succession.” It’s got devious parlor games, backroom corporate jockeying, bloody agendas and plenty of unintentional camp, which is both good and bad.

We’re talking the Italian fashion industry in the 1970s, when old-school Gucci lions Rodolfo (Jeremy Irons) and Aldo (Pacino) prided themselves on the lineage of special cows used to make super soft, artisanal loafers and handbags that cost most people’s annual salary. Aldo wants to kick the business into the more modern world with innovations such as malls in Japan; Rodolfo resists. But the real focus of “Gucci” is the fatal relationship between Lady Gaga’s uncompromising Patrizia and Rodolfo’s bookish son, Maurizio (Adam Driver). By now, you’ve probably read about the steamy sex scene between Gaga and Driver, and while it is steamy, it’s more a physical, crash-bang-boom event than an erotic interlude, befitting Patrizia’s driven woman: She works in her family’s trucking business until she’s successfully stalking Maurizio in a bookstore and getting that big ring, then pushing Maurizio into the family business with a pinch of Lady Macbeth mania.

The narrative of “Gucci” may be driven by the above- and below-board dealings of the fashion empire, but what Scott’s assembled here is a potpourri of characters that pop off the screen with a capital P. As Aldo, Pacino serves up a Thanksgiving ham with a big, viscous side of pineapple sauce, somewhere between his over-the-top take on Jimmy Hoffa in Martin Scorsese’s “The Irishman” (2019) and his “Hoo-ah!” hokum in “Scent of a Woman’’ (1992). Besides Gaga – more on that in a bit – the real scene-stealer is Jared Leto, unrecognizable under bad hair, potbelly and a prosthetic nose like Tom Cruise in “Tropic Thunder” as Aldo’s attention-seeking son Paolo, the Guccis’ own Fredo Corleone sad sack, full of ambition and always biting his tail. Iron’s ailing Rodolfo is gaunt and wan in the extreme, looking like the undernourished version of Gary Oldman’s Count Dracula in Francis Ford Coppola’s 1992 spin on Bram Stoker’s novel. (Irons is one of the only actors in the impressive ensemble who doesn’t attempt an Italian accent, which is both disconcerting and a blessing.) Driver’s his fine, likable self as Maurizio in a film in which not many of the characters are.

The film clearly belongs to Gaga, giving a big, bold performance that proves what we knew when she was Oscar-nominated in 2018 for her pop-star-in-the-making turn in “A Star is Born”: The woman can act and is a force onscreen. She carries the film through silly and serious, and even though it’s a big performance, it never spins into spectacle like some of her castmates’ do.

Scott, who recently lambasted superhero films, has had a long line of critical success – I’ll cite “Alien” (1979), “Blade Runner” (1982) and “Black Hawk Down” (2000) – but takes a bit of a stumble here. It’s a whirlwind of concepts, stylization, allegories and an incredible cast all getting their big solos (did I mention that Salma Hayek plays Patrizia’s brassy tarot card reader?) without gelling at the core. At more than two and a half hours, “House of Gucci” is highly entertaining and the use of pop tunes from Donna Summer, Blondie and George Michael, to name a few, anchors the era with perfect aural nostalgia. But for all its build, bluster and pomp, in the end “Gucci” gets sewn up and sold like a cheap knockoff pump in the secondary market.