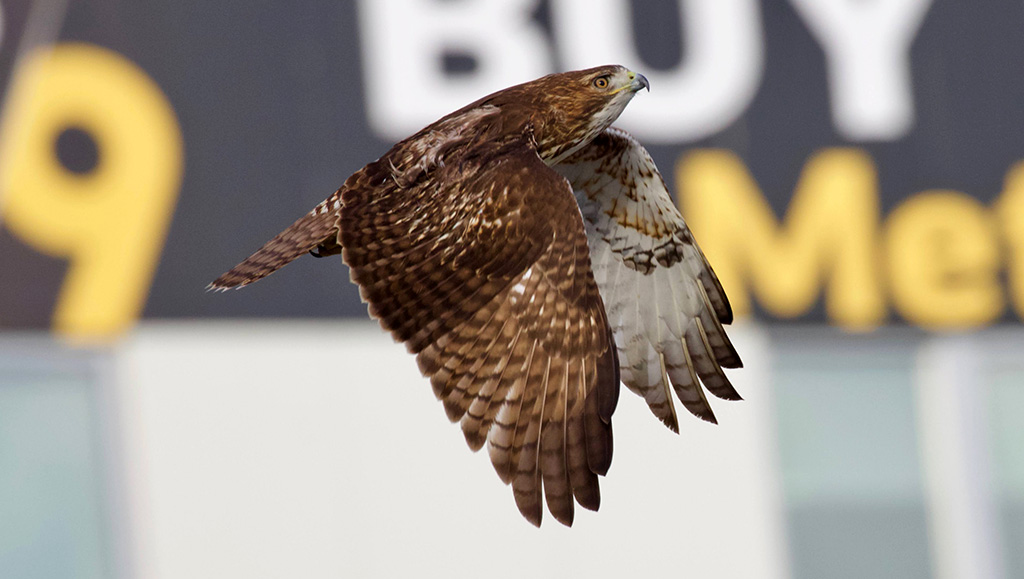 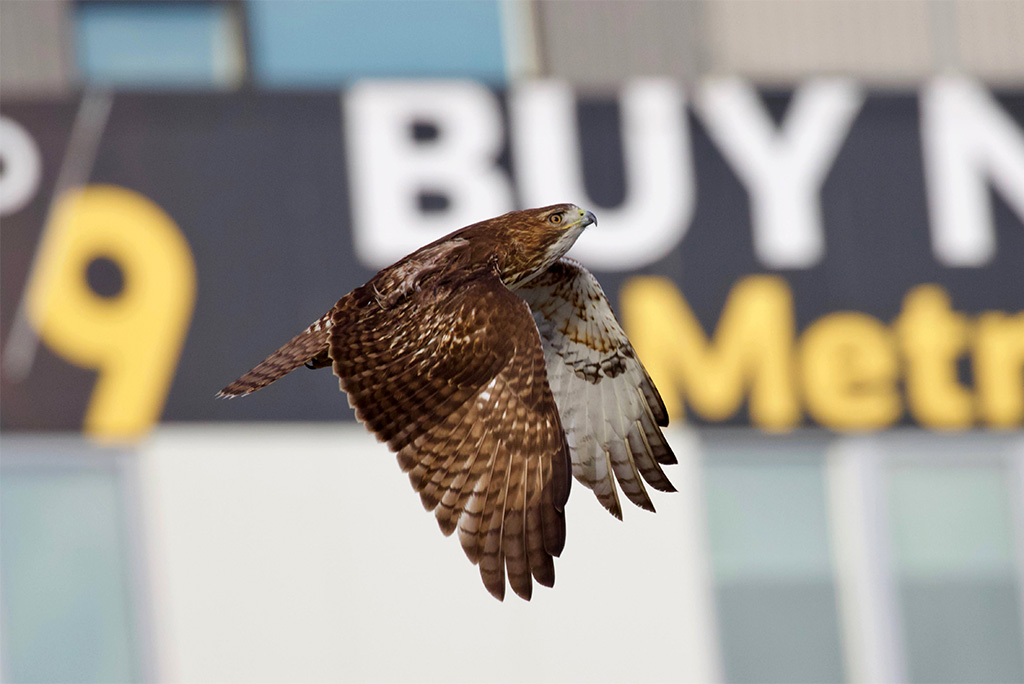 Red-tailed hawks – who has not seen one of these commanding creatures perched atop a streetlight or roof, surveying the landscape below? Perhaps because of habitat destruction, the availability of rodents in cities or tall buildings and ledges that make good nesting sites, these majestic birds in recent years have come to call urban areas home. Whatever the reason, these impressive raptors are here to stay.

It hasn’t always been (and still isn’t) easy for these birds. Known also as hen hawks or chicken hawks, farmers persecuted these birds in the mistaken belief that red-tailed hawks preyed upon chickens. To be fair, the hawks did occasionally take a hen, but the vast majority of their diet consists of rodents or other small mammals.

After the Civil War, raptor hunting increased dramatically due to growing numbers of people and the availability of breech-loading guns. In Pennsylvania, where bounties were put on hawks, it is estimated the chicken farmers saved only one dollar for every $1,205 paid in bounties in 1885.

Naturalist John Muir, in his 1913 “The Story of My Boyhood and Youth,” wrote about one experience he had with these hawks in in the mid-1800s:

I noticed a big white-breasted hawk on a tall oak in front of the chicken-house, evidently waiting for a chicken breakfast. I ran to the house for the gun, and when I fired he fell about halfway down the tree, caught a branch with his claws, hung back downward and fluttered a few seconds, then managed to stand erect. I fired again to put him out of pain, and to my surprise the second shot seemed to restore his strength instead of killing him, for he flew out of the tree and over the meadow with strong and regular wing-beats for thirty or forty rods apparently as well as ever, but died suddenly in the air and dropped like a stone.

As late as the 20th century, hawks were maligned as chicken killers. Those of us of a certain age can remember the Loony Tunes cartoons featuring Foghorn Leghorn and Henery the chicken-hawk. These cartoons and others like them helped perpetuate the myth that red-tailed hawks preyed upon farmers’ chickens and must be eradicated. For years, there were bounties on hawks in many states to reduce agricultural losses and preserve game birds for hunters. Over time, however, rodent and insect populations soared as the hawk population declined, and it became clear that rats and mice caused large-scale agricultural damage when their numbers were not kept in check by hawks. 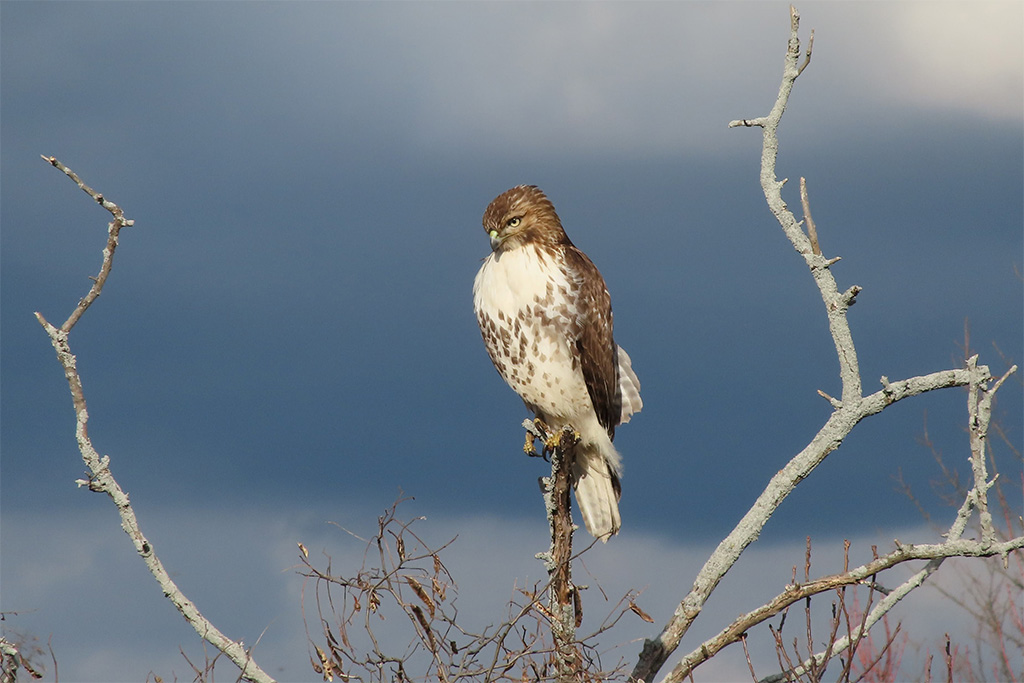 There are more red-tailed hawks in our area in the winter than the summer because hawks from more northern areas travel south and join our local, year-round birds. (Photo: Richard George)

Once bounties disappeared, though, another threat to hawks emerged: inexpensive and long-lasting pesticides such as DDT – considered such a wonder chemical that its developer, Paul Muller, received a Nobel Prize for it in 1948. Many bird populations collapsed in the chemical’s heyday of the 1950s and ’60s as it thinned eggshells, causing embryos to die. This era came to an end in the 1970s when the U.S. government put in place a ban for agricultural uses because of its adverse effects on wildlife and potential harmful effects on people. In 1972, the Migratory Bird Treaty Act added raptors to its list of protected birds of prey. Slowly, the hawk population began to rebound after years of persecution and decline.

Today, red-tailed hawks face still another human-introduced threat: rat poison. In a 2020 study, Maureen Murray, director of the Tufts Wildlife Clinic at the Cummings School of Veterinary Medicine in Grafton, found that 100 percent (that’s right, every single one) of the 43 hawks autopsied at the center had rat poison in their systems. Rat poison thins an animal’s blood and causes it to bleed slowly to death. Because a poisoned rat does not die immediately but continues to stumble around for a few days, the rat become easy prey for hawks and other predators, who then ingest the poison. Because 85 percent to 90 percent of a red-tailed hawk’s diet is rodents, and because hawks need to eat several rodents per day, the poison can build up to toxic levels, especially if the hawks eat rodents from an area with many bait stations. 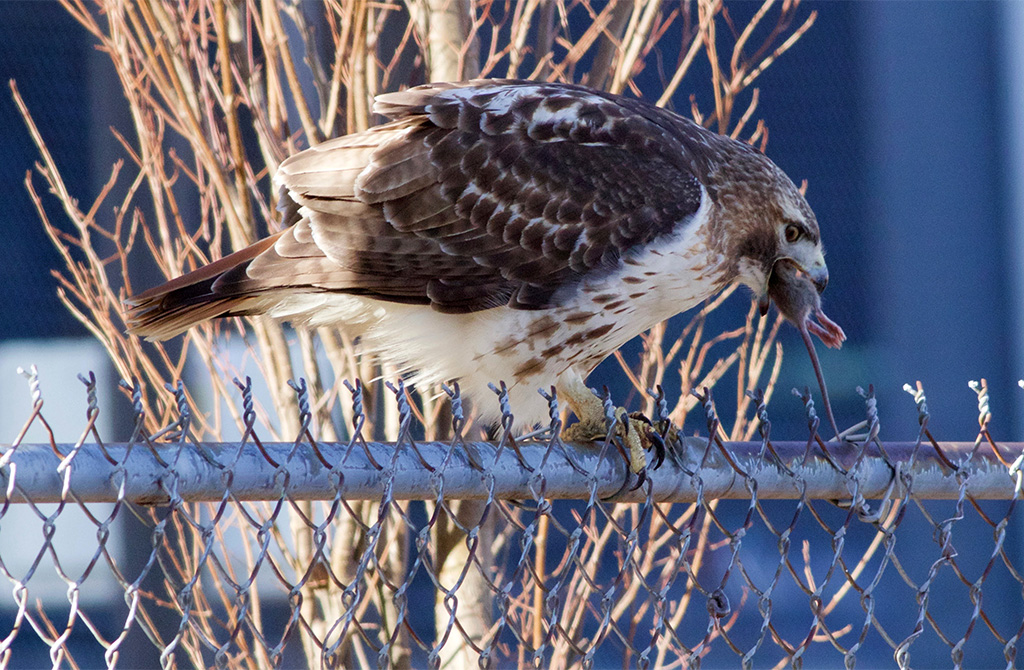 Other studies have found rat poison in songbirds and even insects! This poison permeates the entire food chain and ecosystem where it is used. According to the National Pesticide Information Center, most rodenticides are toxic when breathed in or even touched. Children and pets can suffer serious health consequences from a single exposure to a rodenticide.

Life in the city

Red-tailed hawk (Buteo jamaicensis) pairs bond for life and breed beginning in March. Together the couple builds a nest of twigs in a tall tree, cliff or, in an urban area, on a building ledge or even a fire escape. The female lays one to five eggs and incubates them for about a month while the male hunts for food. When the eggs hatch, the youngsters are covered in white down and completely dependent on the parents. Watch a red-tailed hawk hatch here and get fed for the first time here. 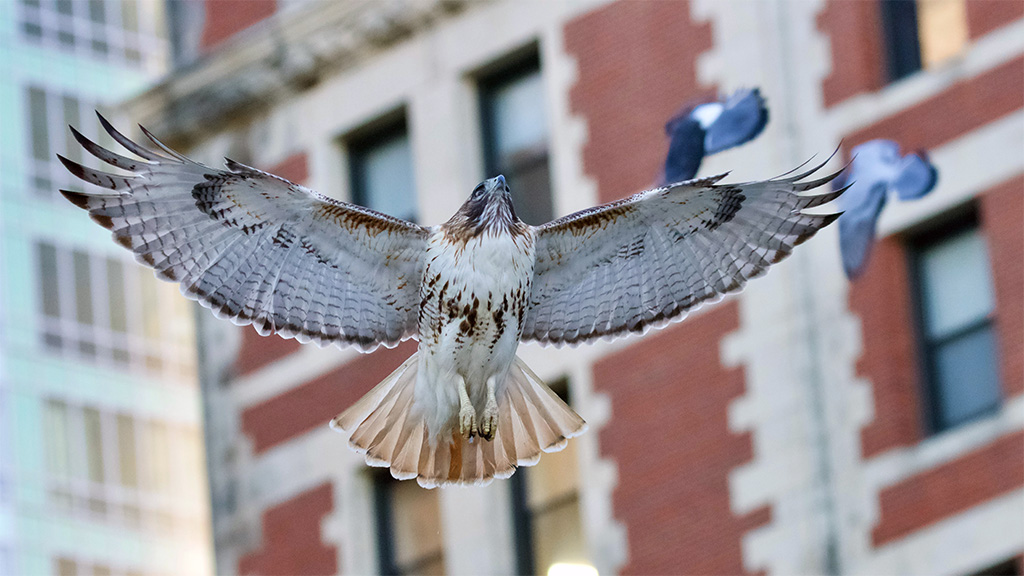 The young become very lively, walking about in the nest, stretching or flapping their wings, backing up to the edge of the nest to void their excrement in a long stream far over the edge; the ground under a nest of young hawks is well decorated with a circle of white. Their eyes are very keen, and they frequently raise their heads to watch passing birds or to look for the return of their parents. Their weak, peeping notes are heard occasionally, but when one of their parents is sighted they become quite excited and indulge in louder screams.

The youngsters stay in the nest for about a month and a half. By the end of this time, they are about as large as the parents. Once the youngsters fledge, or learn to fly, they leave the nest and follow their parents around, screeching for food. The parents oblige by dropping food near the young hawks. About six weeks after leaving the nest, the youngsters begin to capture their own food. By about 4 months old, the young have become self-sufficient, but are inexperienced hunters and will eat roadkill or other easy prey. They reach breeding age when they are about 3 years old. 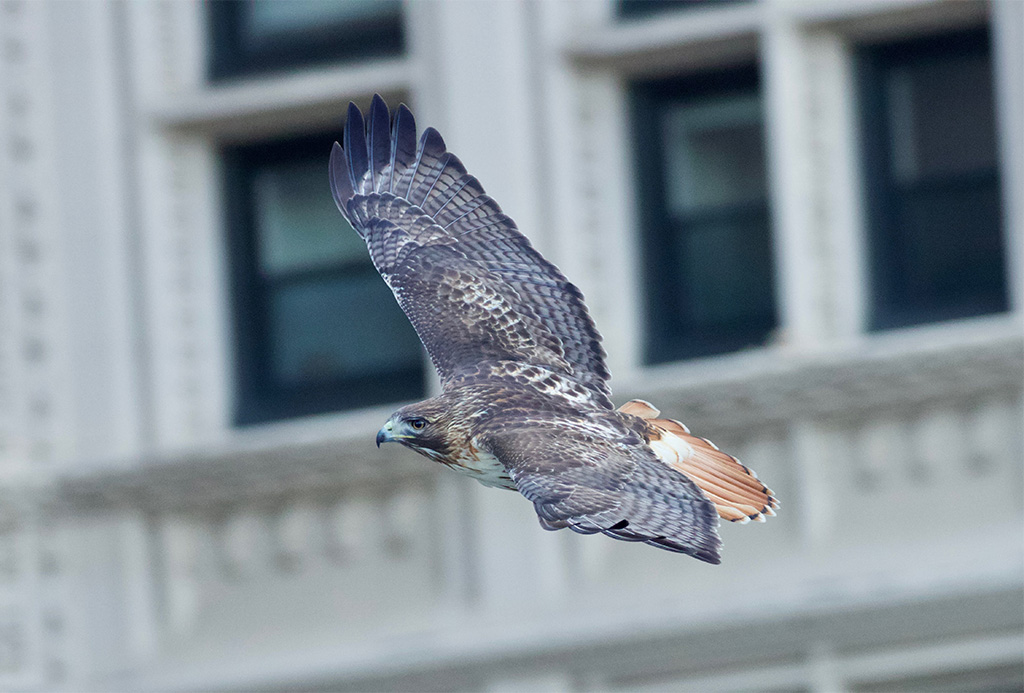 A red-tailed hawk in flight, viewed from above. Notice the hooked beak, yellow eyes and reddish tail. (Photo: Brian Rusnica)

Adult red-tailed hawks are about 19 to 25 inches long. They have broad, rounded wings with a wingspan of 4 or more feet. Females are larger than males. Most are brown on top with a pale underside. Adult red-tailed hawks have a rust colored tail above, but juveniles do not. These hawks soar over fields and open space searching for prey. Their eyesight is so good that they can spot a mouse moving from 100 feet away. When diving after prey, their speed can reach 120 miles per hour.

This is the time of year to spot red-tailed hawks, because they are more abundant in our area in the winter; some northern red-tails overwinter with our year-round birds. Keep your eyes peeled and you might see one perched atop a light post or on a roof. On slightly windy days, look for them soaring in circles through the air; on days with stronger winds, you might see one kiting, or remaining stationary in the wind, with its wings outstretched. These raptors are truly a magnificent sight. 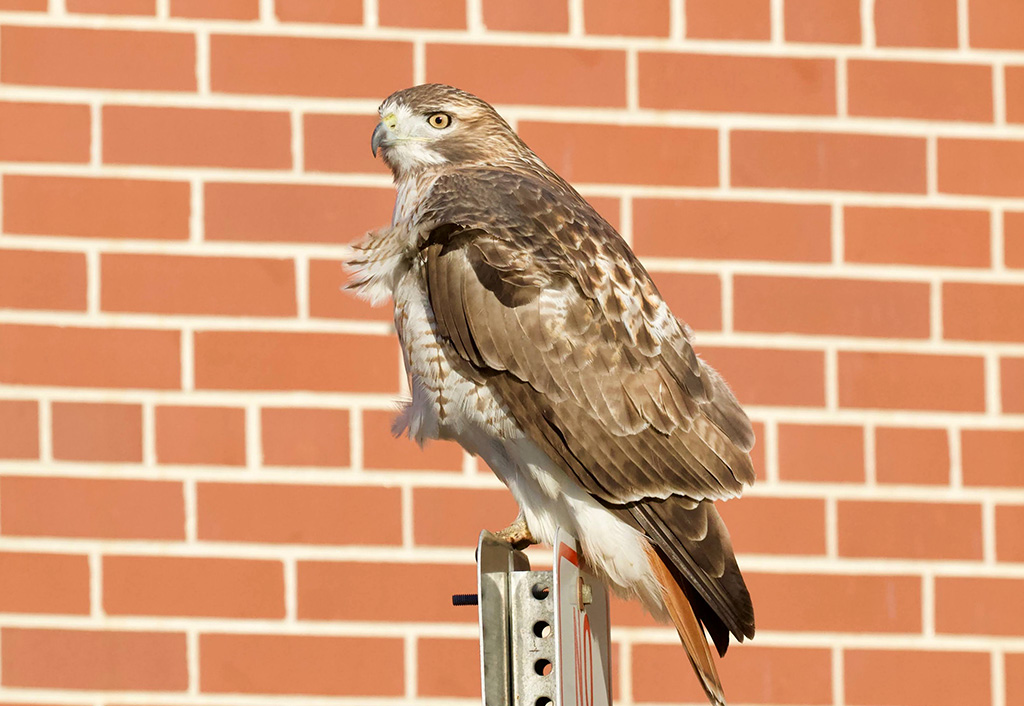