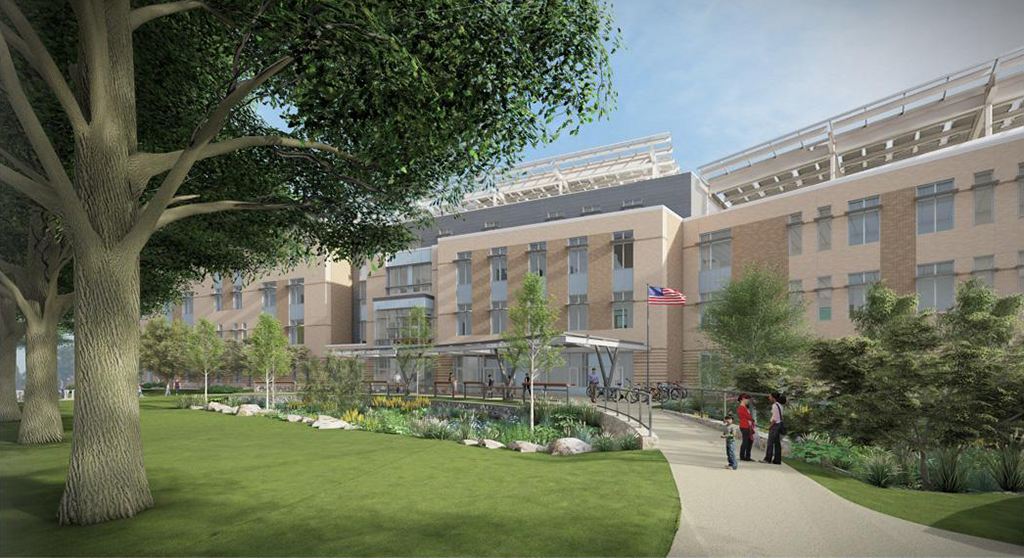 A rendering shows the expected appearance at the south entrance of the Tobin School, due to reopen in 2025. (Image: City of Cambridge)

Neighbors of the impending years of construction at the Tobin School and Vassal Lane Upper School campus were upset to learn they hadn’t been invited to a groundbreaking ceremony now set for 2 p.m. Wednesday.

Invitations went out to city and state officials Nov. 30 for a 2 p.m. Tuesday event with a note: “Light refreshments will be served. All are welcome to attend.”

The news never made it to neighbors, including members and leaders at the Fresh Pond Residents Alliance, board member Doug Brown said Tuesday. Despite there being a tent on site that appears to be for the event – for which Wednesday was identified originally as a rain date – the groundbreaking came to neighbors’ attention only because state Rep. Steve Owens asked someone in passing if he would see them there Tuesday.

“Of course, no one thought to notify the neighbors and abutters, and nothing is posted on the project website,” Brown said in a Monday email to city councillors.

At 8:45 p.m. Monday, the Department of Public Works finally sent a notice to subscribers to an email list for updates on the project. The subject line said simply, “Tobin and Vassal Lane Schools,” according to a school neighbor on the list.

After being contacted Tuesday with questions, Kate Riley, community relations manager for the Department of Public Works, explained that “We had a miscommunication between staff about who was notifying the neighborhood, so we postponed the event from today to tomorrow.”

The Tobin School and Vassal Lane Upper School complex at 197 Vassal Lane, West Cambridge, built in 1971, is being prepared for a $250 million reconstruction that will finish in time to open to students in the fall of 2025. While the project has grown significantly in expense over years of planning, the city has already been stung by a couple of issues around timing there: Being slow to respond to calls around buying state armory land next door to the schools, an effort that needed a nudge from state legislators who were contacted by city councillors Patty Nolan and Alanna Mallon; and the removal of mature oak trees that might have been saved if armory land was part of the design process.

By now there have been months of digging on site, with city construction updates showing Aug. 3 as its start. That makes the groundbreaking even more ceremonial than some such events, but neighbors still say they are insulted by the city’s dereliction over the invitation.

“The city has apparently known about this event for at least two weeks [and] notified state reps 15 days ago, but never sent an email to the project email list or notified the neighborhood association,” Brown said.

The Tobin and Vassal Lane project is hardly the first city project to antagonize neighbors. Over 2018, plans to reconfigure Inman Square and its chaotic traffic patterns – given energy after years of discussionby the death of a bicyclist – caused controversy when it was learned that some of Vellucci Plaza’s 50-year-old honey locust trees would be removed in the process. Neighbors organized, proposed alternatives and ultimately sued over the changes.

A neighborhood group leader, John Pitkin, said Tuesday that he didn’t recall seeing an invitation to a project groundbreaking either – but wasn’t sure one ever got held.

“It was quite unceremonious. I think they were leery of protesters,” Pitkin said. “If I saw an invitation, I would have deleted it, probably.”