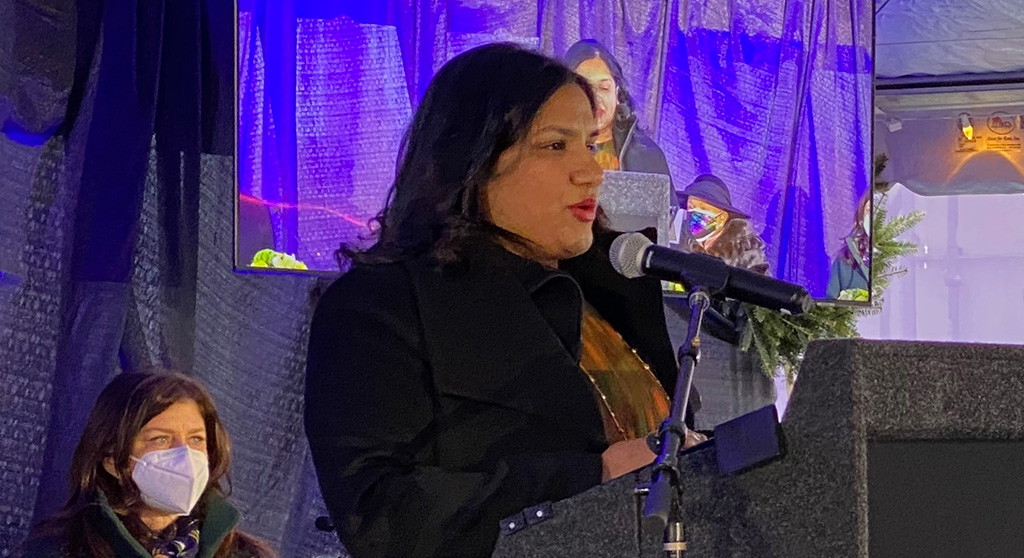 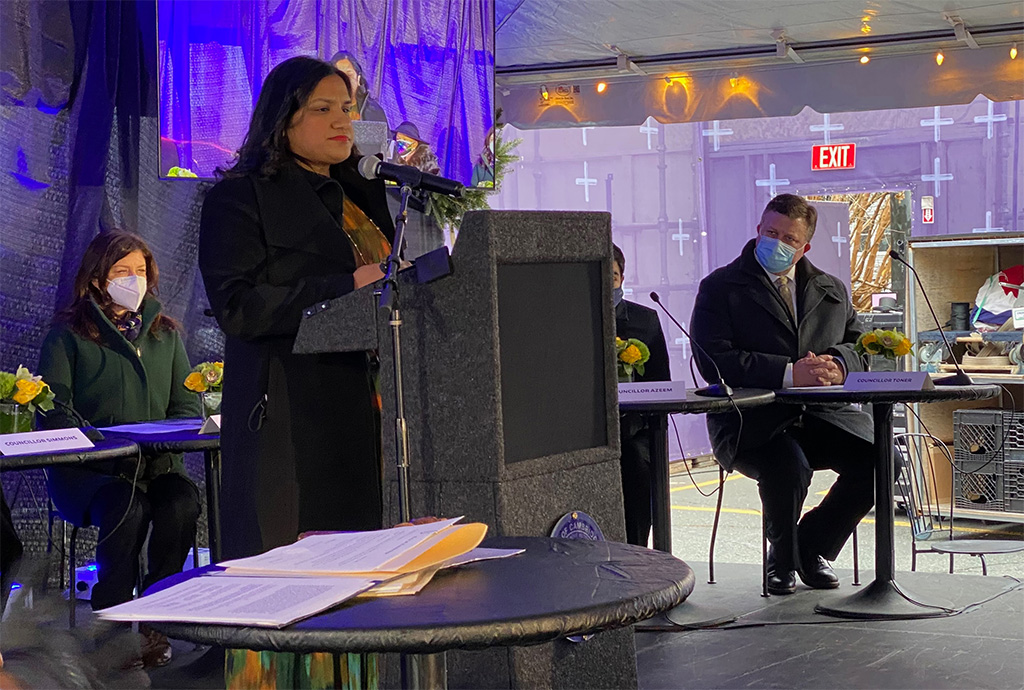 Things moved fast at Monday’s City Council inaugural, held outdoors at the Starlight Square complex to help prevent the spread of coronavirus. And it wasn’t just because the weather was a frigid 25 degrees that had elected officials and some 100 attendees shivering.

U.S. Rep Ayanna Pressley, due to make an opening address to the council, was forced to cancel after testing positive for Covid-19 on Friday.

In addition, for the fifth term in a row, the City Council’s election of a mayor and vice mayor went swiftly. Sumbul Siddiqui was returned to the Mayor’s Office unanimously, and Alanna Mallon to her seat as vice mayor on a 5-4 vote.

The election of a mayor and vice mayor from within the council’s ranks took place immediately after the nine were sworn in, with Burhan Azeem and Paul Toner seated in place of Tim Toomey, who retired after more than 35 years of public service, and Jivan Sobrinho-Wheeler, a first-term councillor whose run for reelection was unsuccessful in November. 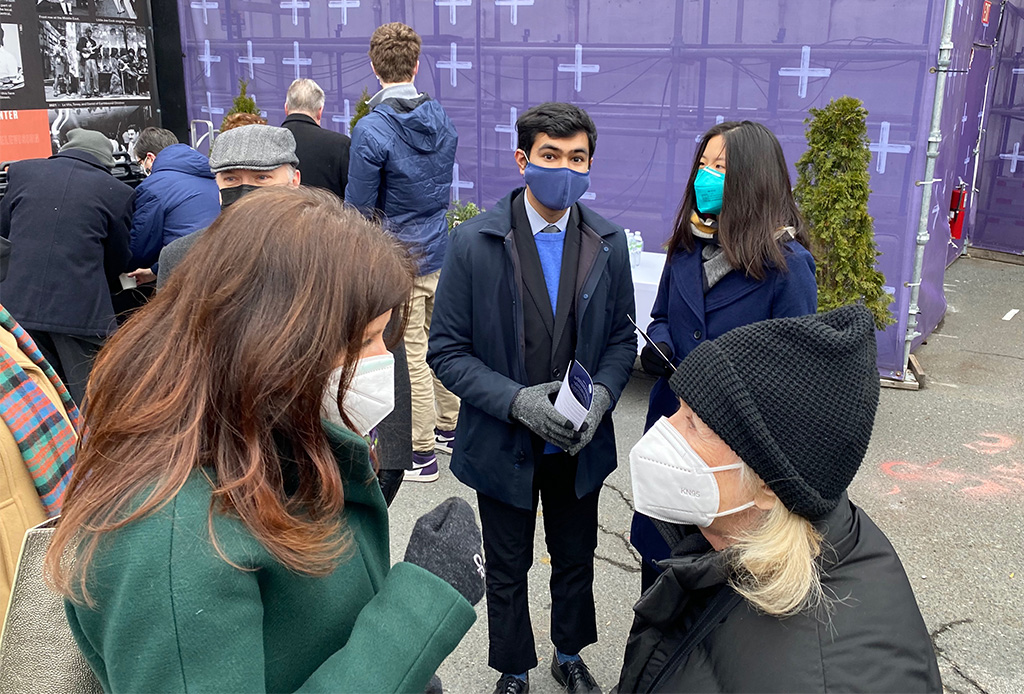 In the first round of balloting, Mallon had only two votes, second-term councillor Patty Nolan led with four and senior councillor E. Denise Simmons – in her 10th term in office, and with two terms as mayor under her belt – held three.

Siddiqui, who has a close relationship (and podcast hosting duties) with Mallon, voted for Nolan. 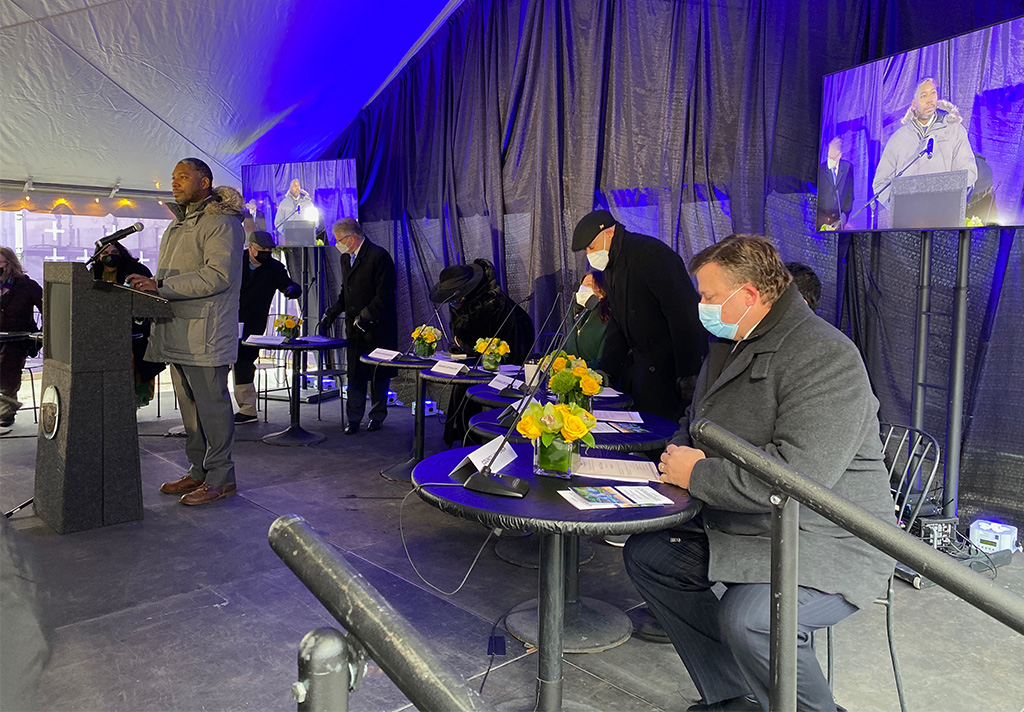 In the second round, Siddiqui switched her support to Mallon, and so did Zondervan. When McGovern switched his vote to Mallon in the third round of inquiry from city clerk Anthony Wilson, she had the majority. Two years ago, Mallon had been elected vice chair unanimously after Siddiqui got her first unanimous election.

The trend of quick mayoral elections relies on between-term backroom politicking to get the council working swiftly, according to insiders who have been through the process, with the goal being to avoid the kind of legislative inertia seen in years such as 2010 and 2012. Mayoral elections took up to 10 ballots in those years (and, in 2012, required a special Wednesday meeting to resolve things) and lasted well into February, delaying the appointing of committee leaders and therefore slowing the hammering out of complex or controversial ordinances before being heard by the full council. The mayor also leads the six-member School Committee.

In her first-term speech, pre-Covid, Siddiqui told of her family arriving as immigrants from Pakistan and finding a home in the United States, and nodded to her own background in Cambridge’s public housing. This year, the pandemic dominated.

“During my inaugural speech almost two years ago, in a packed Sullivan Chamber, I was 20 years younger,” Siddiqui joked momentarily. “I spoke about how service is second nature in Cambridge, I said that throughout my life I’ve watched the people of Cambridge care for one another, be there for their neighbors and step up in times of need. I knew those words were true when I said them at the time, but I didn’t realize the extent. Over the last term, it became more evident than ever that we rely on each other, that our fates are deeply intertwined. We all hit low points these last two years. The isolation, the fear and the unknowns have had huge impacts on our mental health, especially our students. And tragically, we’ve lost 128 residents to Covid, including two just last week.”

But noting many sources of inspiration in the community, Siddiqui said, “Watching Cambridge residents step up time and time again gives me more confidence than ever that we can work together, solve problems and overcome the obstacles that stand in our way, though the challenges we face are many, and they will not be met easily.” 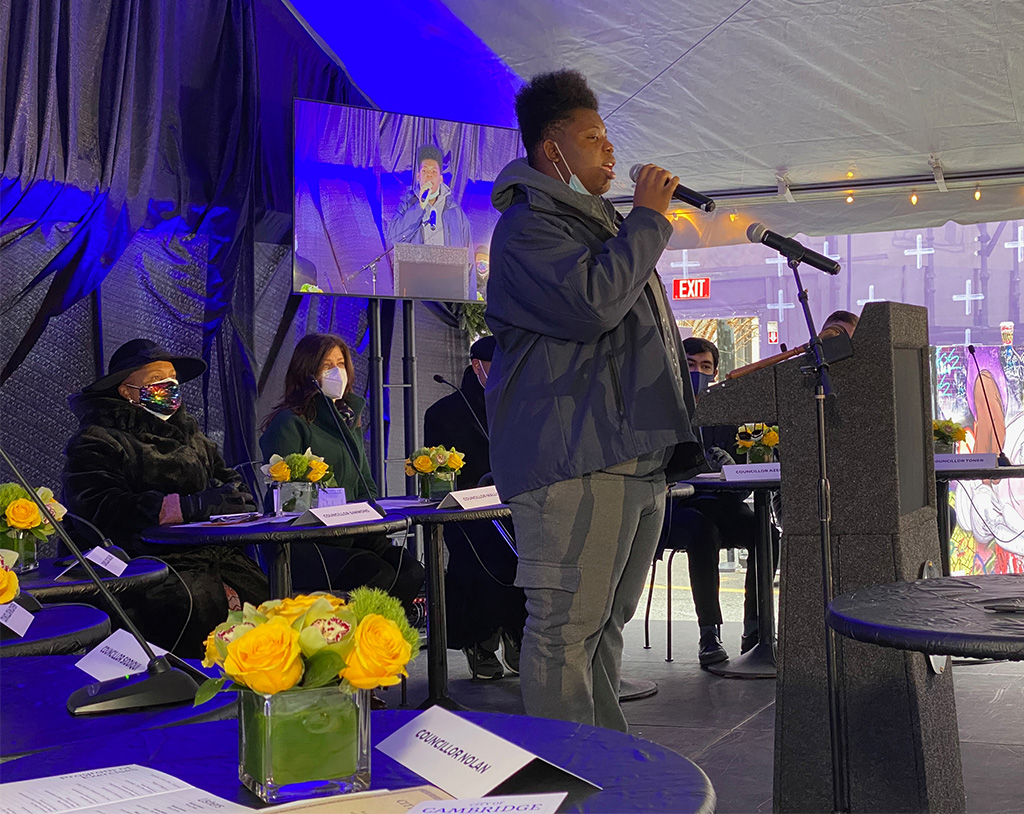 Problems of real estate pressures on middle- and lower-income residents, lack of support structures for black and brown students, increasing climate change and sporadic gun violence persist, but “what makes Cambridge unique is our passion for confronting these challenges and the drive to solve them,” Siddiqui said. “The pandemic has shown us that we can act quickly and can bring needed change faster. As we enter the new year and the new term, let us each and every one of us continue to step up and take care of one another, and run toward the challenges that lie ahead.”

Mallon, speaking of the cold that had the audience increasingly hunched and huddled, said only that she was grateful for the opportunity to serve again, including to help tackle the problems caused by the pandemic. “We are outside, we are wearing masks and we are in the middle of a very difficult and dangerous variant that we are all going to need to pull together once again and get through together,” Mallon said. “We’ve got a lot of work to do, Cambridge. I look forward to doing it with my colleagues.”

Nolan said she was disappointed not to be vice mayor but looked forward to continuing her work as a city councillor – and said she’d like to see these intra-council elections run like Cambridge’s other elections: with ranked-choice voting. “There’s nothing in the charter that says how you elect a mayor and vice mayor,” she said after the inaugural. 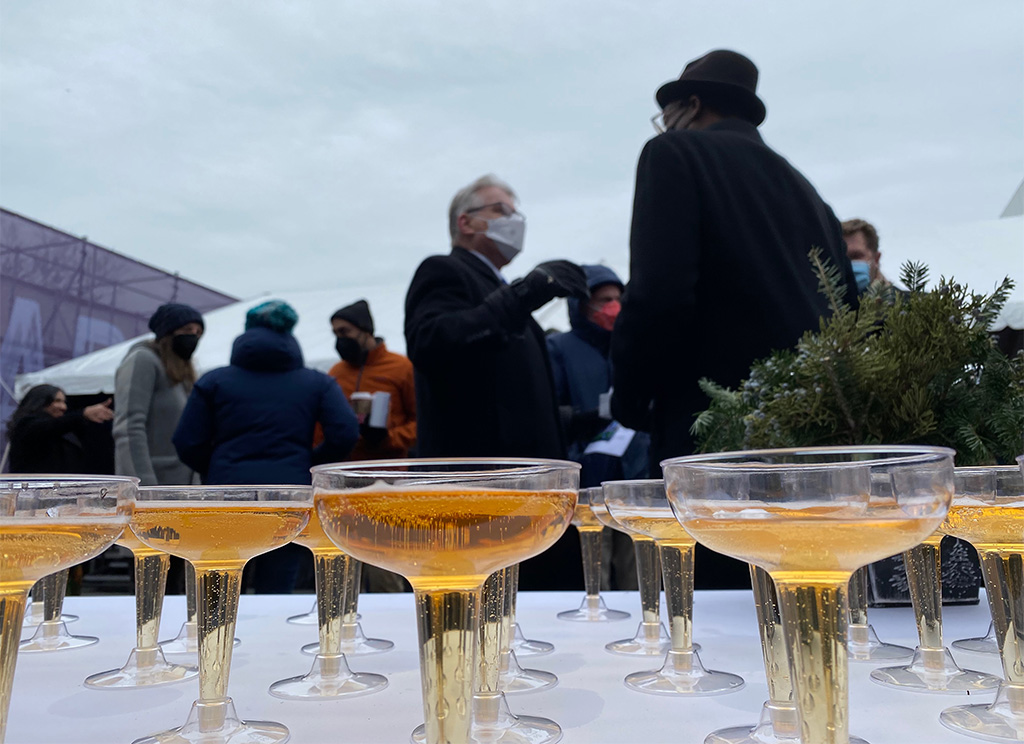 The 10 a.m. event lasted a little over an hour even with a slightly late start, begun and ended with stunning musical presentations by Cambridge Rindge and Latin School’s James Isaiah, a member of the Class of 2025. The Central Square Business Improvement District helped pull the event together with hot drinks from 1369 Coffee House and food selections ranging from cupcakes to Tasty Burger, with sparkling apple cider available in plastic champagne-style glasses for toasting.

In attendance were state Reps. Mike Connolly and Marjorie Decker, former mayor Ken Reeves and other current and former city officials. Notable by his absence was City Manager Louis A. DePasquale, reportedly having tested positive for Covid like Pressley. That would not be confirmed by the City Manager’s Office, where an aide said Monday, “He’s not in. He’s sick, period.”

Lee Gianetti, director of communication and community relations, was also out and could not take media inquiries, according to DePasquale’s office.