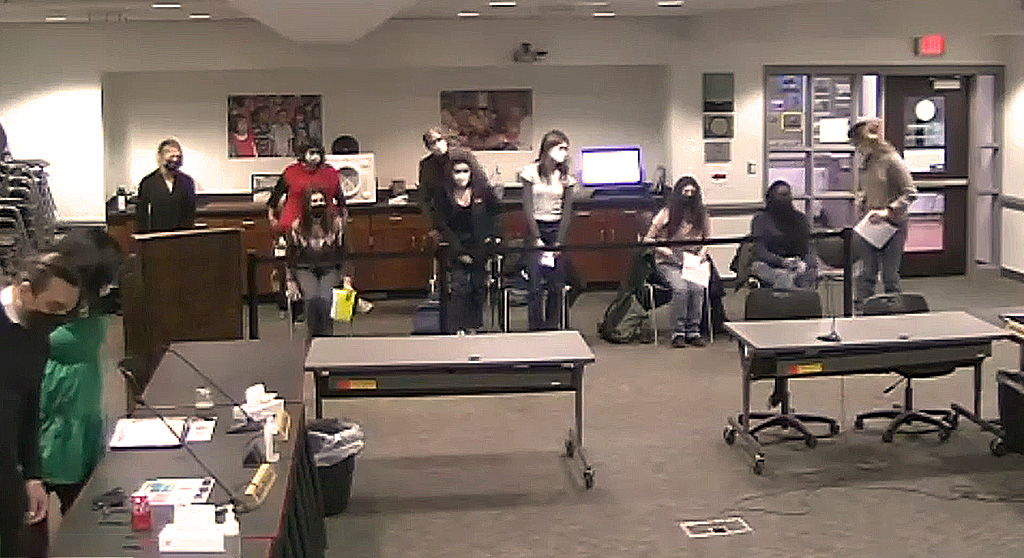 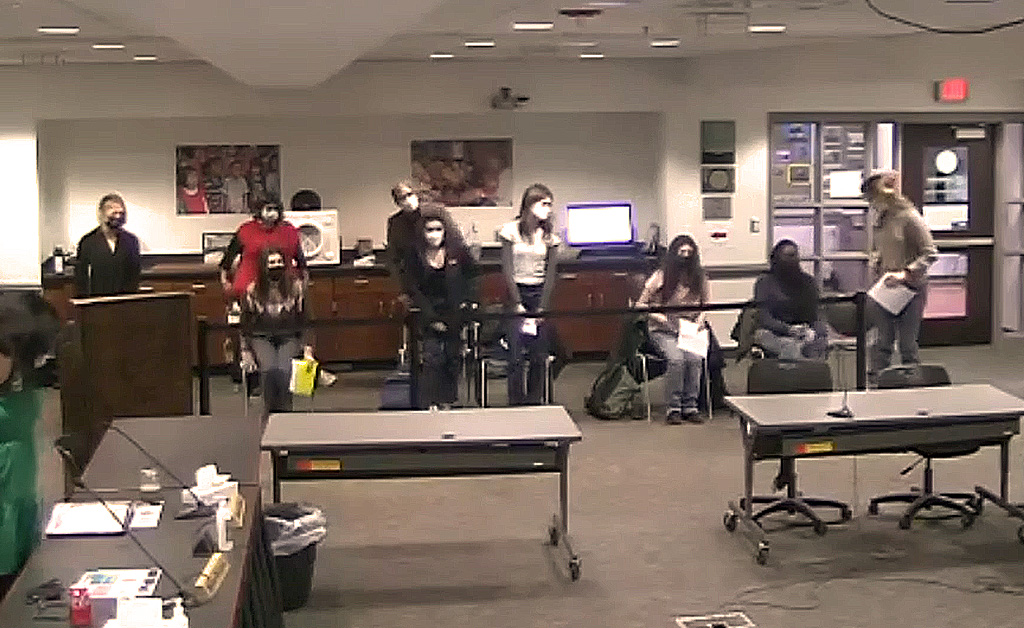 A screen capture from Tuesday’s meeting of the School Committee show students preparing to give in-person testimony.

When School Committee member Ayesha Wilson asked if a motion could be “speeded along” Tuesday, it’s unlikely that she foresaw the committee waiving a second reading and passing it unanimously five minutes later, culminating in spontaneous applause by in-person attendees at the meeting.

It was simple on the surface, changing high school graduation requirements to 15 health class credits from five starting in 2025 and preventing students in team sports from waiving health course requirements.

The larger context of the motion is complex, rooted in student-led protests in the spring of 2019 and November in support of sexual-assault victims after “misogynistic photos and screenshots posted by members of the CRLS football team circulated on social media” in March. The incident was reported by The Register Forum, the student newspaper of the Cambridge Rindge and Latin School.

Previous school rules required only first-year students to take both physical education and health classes, while older students must take two every-other-day classes that are “related to [such things as] fitness, health, lifelong activities, team sports, water activities, CPR and adventure leadership” or dance programs, according to the district website.

More health education was called essential by students speaking as members of the Title IX Aurelia Advocates – formed after the November walkout and named for Aurelia Davis, who sued a Georgia school district in 1999 on behalf of a fifth-grader daughter after sexual harassment by a classmate. The U.S. Supreme court ruled that school boards are liable for failing to stop student-on-student sexual harassment under certain circumstances.

“This is not a request for more just more sexual education. We don’t need more time to talk about biology and condoms,” senior Nasra Samater said. Rather, senior Abigail Price said,“We believe that teaching consent is currently poorly understood and vitally necessary.”

An “action plan” to address sexual harassment and assault, particularly at the high school and city upper schools, received enthusiastic School Committee support in 2017, but failed to prevent the incidents leading to the student walkouts.

Topics that needed to be discussed included coercion, power dynamics, how to communicate boundaries, how to ask for consent and detailed definitions of sexual harassment, assault and rape, students said. Kaelyn Silva, a junior, noted that at the November walkout “it was evident that many survivors giving testimony were initially unaware that they were assaulted.”

It was insufficient to have “only one period of one health class during a student’s freshman year, meaning that this crucial lesson can be missed by having a doctor’s appointment, skipping class or any other event that may interrupt this limited 85 minutes of learning,” said Morgan Nerich, a senior.

The group submitted to the district and School Committee a proposal examining the district’s overall legal compliance with Title IX legal protections against discrimination based on sex, senior Anna Bellows said. The group identified three major issues with the procedures around students filing formal complaints of sexual misconduct: Students must “submit their form no later than 20 calendar days after the alleged discriminatory practice,” when the “nationally and locally recognized timeline is at least 180 days”; the directions say to submit a completed form to two staff members who no longer work for the district; and a there’s a location restriction “that makes this form practically unusable.”

The group plans to work with the district to improve the process, Bellows said.

The health class curriculum also must be developed in partnership with students at CRLS, and possibly other schools as well. “Curriculum is most beneficial to students when students have an active voice in creating that curriculum,” student committee member Nuriel Vera-DeGraff said.

The district will provide a detailed updated of the action plan at the next committee meeting, set for Feb. 15, Superintendent Victoria Greer said.

Member Jose Luis Rojas asked why the requirements take effect when most students currently enrolled will have graduated.

CRLS uses a block schedule, with long class periods that meet fewer times each day and week, making for little flexibility to insert new classes, said Jamie McCarthy, the school’s coordinator of health and physical education. “A lot of students that are currently in CRLS already have their schedule mapped out for their four years,” McCarthy said. “To add this additional requirement in the middle of their high school experience could be problematic for a lot of students.”

The department may pull together small classes in the spring to jump-start the curriculum, while developing alternative classes for fall 2023, McCarthy said.

Cambridge Education Association president Dan Monahan said that the motion to increase the health credit graduation requirement is a “small, technical step forward” to deal with the continued gender harassment and discrimination experienced by students, particularly female and genderqueer students. He noted that the association is adding the dismantling of sexism to its mission statement, and lauded engaging students in the planning of the new health curriculum.