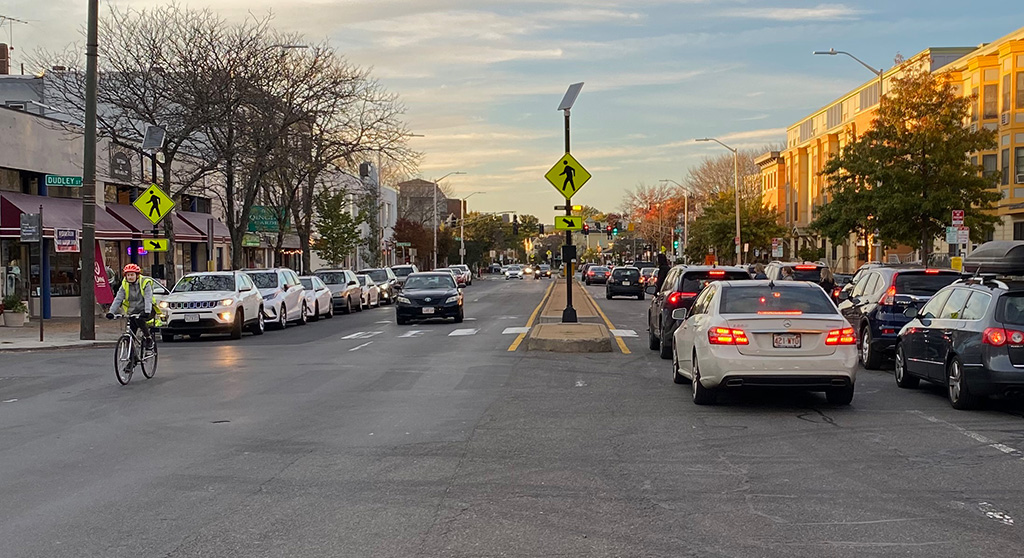 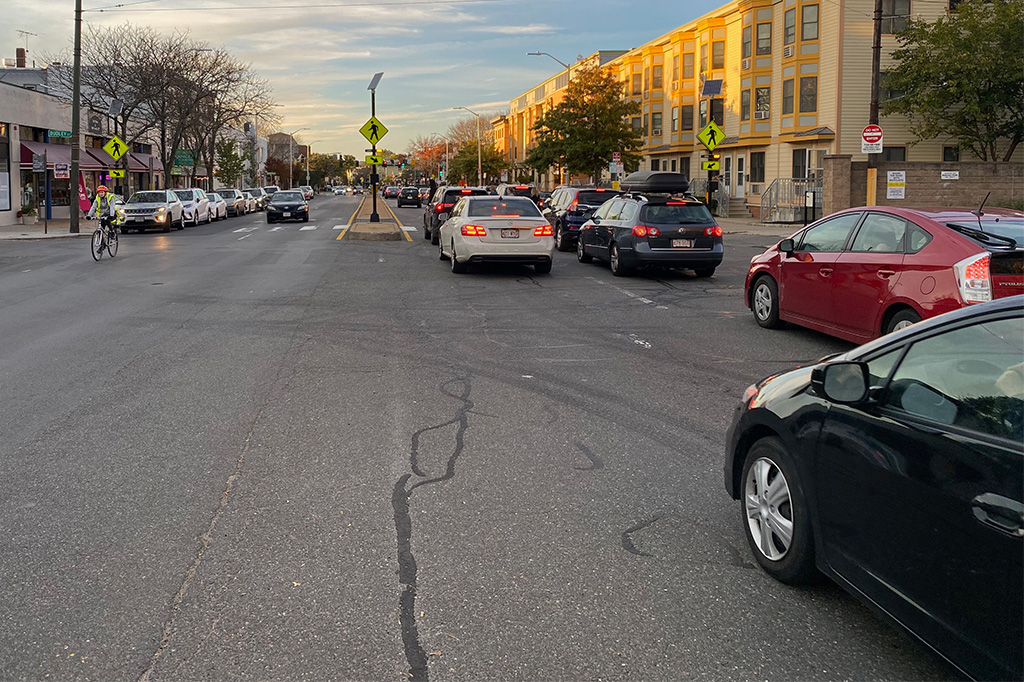 A bicyclist rides toward Porter Square on Massachusetts Avenue in October, before bike lanes were installed. (Photo: Marc Levy)

A study on the business impacts of bike lane was approved Monday by city councillors that has the potential to change future installations, though the text of the order calling for it offers no guarantee that it will.

The order says it seeks data good or bad on the effect of the lanes, which Cambridge businesses have said for years hurt their bottom lines by taking away customer parking. Supporters of the lanes, meanwhile, point to studies from around the nation showing businesses helped by customers on bikes and wonder if the most recent concerns aren’t really responding to factors such as the pandemic and winter weather.

While the order calls for a “standard public process” before new sections of bike lanes are put in, author Marc McGovern notes that it’s also to be “consistent with the Cycling Safety Ordinance” that sets the pace for installation. Fellow councillor Quinton Zondervan had a reminder about that for the more than two dozen business owners and customers who spoke during public comment.

“We have to be honest with our constituents and be clear with them that we are supporting the bicycle safety ordinance as is. We can certainly do these studies and assess the impact, but we’re not planning to change the schedule of implementation,” Zondervan said.

As written and approved – with an amendment to ensure a full year of data is used and stop the lower use of bike lanes in winter from affecting outcomes – the study is to “help inform future installations of bike lanes along commercial corridors,” yet the city manager is to meet with staff to decide “what general evaluation process will take place post-installation now and for a full year once the bike network is completed.”

Most protected bike lanes are required by the law to be built by May 1, 2026. Before voting, councillor E. Denise Simmons asked to clarify the meaning of the amendment, considering that it would have to be interpreted by future councillors “three or four or five years from now.”

“… Once the bike network is completed”

An attempt was made by councillor Patty Nolan to clarify the muddled text.

“By saying ’once the bike network is completed,’ it won’t be completed for five years,” Nolan said. “As long as the understanding is that we’ll continue to get data but that we will actually right now say this will help inform future installations – including ones coming up this spring?”

The explanation from councillor Burhan Azeem, who joined the council in January and offered Monday’s amendment for a full year’s worth of data to be gathered, was that it wouldn’t affect “using this for future bike lanes.”

It seemed to satisfy Nolan. “As long as we’re all interpreting it” the same way, she said.

At this point on the agenda, no city staff were present – City Manager Louis A. DePasquale was missing for the meeting anyway due to “an unforeseen conflict,” according to spokesman Lee Gianetti – but Nolan hoped that the economic analysis was begun immediately after the council passed the original order nearly three months ago. “Even if it wasn’t carried over, the work could have been and should have been done,” Nolan said.

The first quick-build bike lanes drew controversy after they were installed in 2017 on Brattle Street in Harvard Square and on Cambridge Street passing the high school, Main Library and two hospitals. “There’s been a number of them in different parts of the city and at this point we have several years of data,” Nolan said.

Whatever the council agreed to, or thinks it agreed to, it did not seem to be what many public speakers wanted.

“I urge the City Council to do the data survey and perhaps slow and stop, to take time to speak to all of the stakeholders and to build some consensus on this issue,” said Meighan McCrea, of Wilson Avenue in North Cambridge, who called herself a cyclist and walker in addition to being a driver. “I am concerned about what kind of community we will have if we lose all of the local businesses … Cambridge will no longer be a place to bike, walk and drive to. It will become a commuter city, a city where cyclists, drivers and walkers go through and do not stop.”