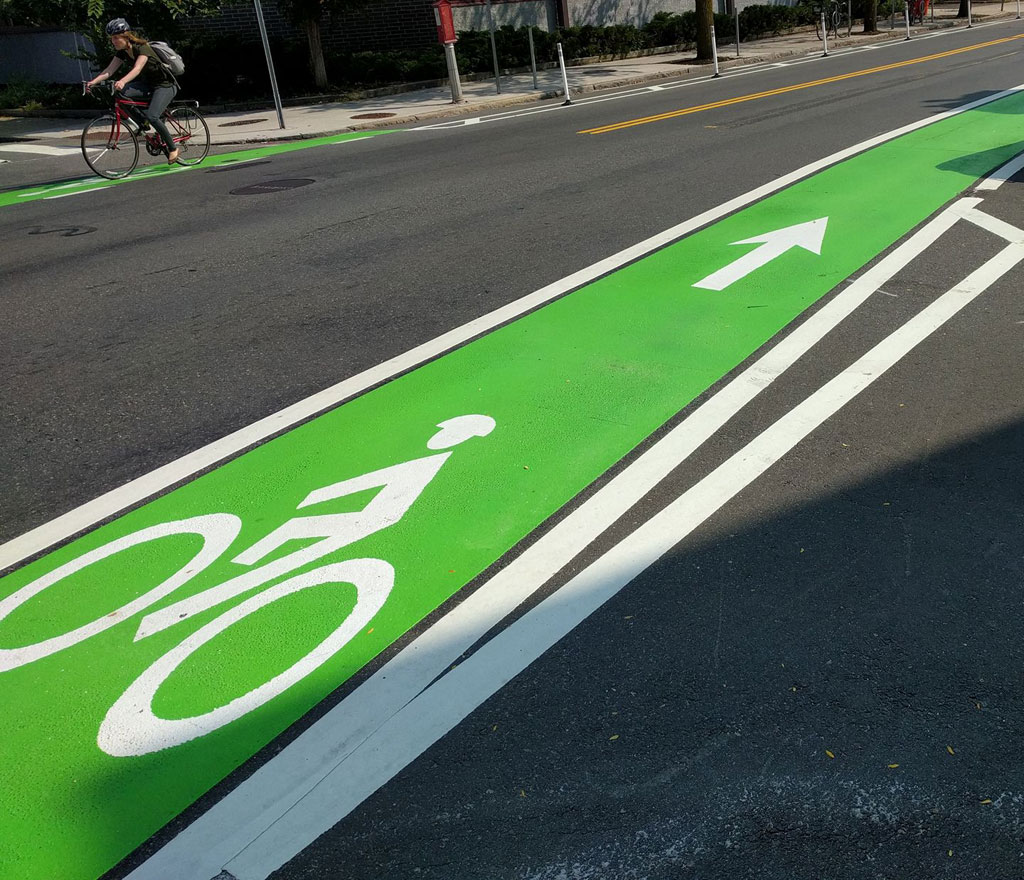 The rollout of some 1.25 miles of bike lanes in less than a year has caused concern and anger among some residents. (Photo: Cambridge Bicycle Safety)

After a few blistering comments from citizens about new bike lanes, city officials apologized Monday for rollouts that seemed to happen too quickly and without enough public outreach.

“We did the right thing the wrong way,” Mayor E. Denise Simmons said during a long discussion at Monday’s meeting of the City Council. “We have caused this problem. We have to be held accountable.”

City Manager Louis A. DePasquale also said he regretted that the addition of 1.25 miles of bike lane in less than a year, after two bicyclist deaths in rapid succession highlighted the city’s slow progress until then, hadn’t been better handled. “There was a lot of hard work done in a very short period … when you do something like this, there’s going to be problems,” he said. “I want to apologize, because I’m the leader of this, and I signed off on everything [the Traffic, Parking & Transportation Department] has done. But we will continue to work with them and we will get this done better. We will get it right.”

“Could we have done some more outreach? Absolutely,” he said.

The criticisms of the process and the resulting lanes was dubbed “the bikelash” by councillor Jan Devereux. Among the six people complaining about new bike lanes on Brattle Street in Harvard Square and on Cambridge Street, passing the high school, Main Library and two hospitals, was Denise Jillson, president of the Harvard Square Business Association, and Robert Skenderian, of Skenderian Apothecary.

Jillson decried a failure to get neighborhood input on the Brattle lanes that “bordered on egregious” and resulted in infrastructure that she said was hurting businesses and putting pedestrians at risk, among other things. “Finally, I’m going to say what others have whispered: The design is … truly unattractive and disrespectful to the historical context of Tory Row.”

Skenderian said the removal of parking spaces in front of his pharmacy and awkward placement for the three that remain makes it difficult and dangerous for the “most vulnerable” residents – the old and sick – to get to his shop for health aides.

Worries about snow removal, lost parking and loading spaces and especially about how cars could get out of the way of fire engines and other emergency vehicles in a rush were raised by residents, business owners and city councillors alike.

The strongest words were from resident Ruth Allen, who said bicyclists were “bullying” their way to bike safety infrastructure, including by filling meetings with out-of-town residents. “You can speak about what happened to those poor two people, and that’s a horrible situation, but don’t use that as a martyrdom to go down to my city and tell me what to do,” Allen said. “And definitely do not go through the city councillors or any of the candidates [for City Council] at this point.”

The council was also asked by Skendarian to “listen to the feedback of residents, and only to residents, of this city and reevaluate what’s been done,” and councillor Leland Cheung lent credence to that point of view when expressing sympathy for pedestrians who felt threatened by bicycles, saying he felt those concerns had to come first and that “pedestrians are the people that are most likely to actually live here.”

Like with cars, many bicycles pass through Cambridge on their way somewhere else. The trend in council politics recently has been toward finding regional solutions to issues such as homelessness and housing construction – a trend Cheung seemed to lead in 2010, shortly after he was elected for the first time, when he helped convene a regional summit on maintaining a competitive local economy. At Monday’s meeting, though, it was Simmons saying bike infrastructure wasn’t a conversation the city could have “on our own,” and she’d wished a recent regional meeting on transportation had included the topic.

While residents had legitimate concerns about safety and design, the influence of outside bicyclists was overblown, said Nathanael Fillmore, co-founder of the Cambridge Bicycle Safety group. In recent emailings of praise from hundreds of people to city officials about new bike infrastructure, the letters were “overwhelmingly” from Cambridge residents, he said, and others were from people who rode their bikes daily to work within Cambridge.

Fillmore was also taken aback by the discussion around Skendarian, where side street parking had always been part of the plan to make up for lost spaces on Cambridge Street and bicyclists had advocated for the apothecary in public and private meetings. While the lack of communication about upcoming changes was a critique heard throughout the discussion, Fillmore said his group had knocked on every door on Cambridge Street between Kirkland Street and Broadway and found “overwhelming support” for the bike lanes.

Cleaned the data up a bit … pic.twitter.com/WOVURen2l3

Despite what was said Monday about aggressive bicyclists hitting or nearly hitting pedestrians, the number of bike-on-pedestrian crashes serious enough to generate a crash report from Cambridge police is about 1 percent of serious crashes of motor vehicles on pedestrians, he noted. Meanwhile, first responders are called to a crash involving a vehicle and bike every other day, on average.

“We need to work together to be sure bicyclists follow the rules – definitely they all should,” Fillmore said. “But what does this have to do with increasing structural safety?”

Streets are too tight and traffic patterns too convoluted to get everyone exactly what they want, councillors said, urging residents to stay civil and keep working in the spirit of compromise.

The city has more than 200 miles of city streets, and about 20 miles worth of protected bicycle infrastructure is called for in city plans – with only about four miles installed so far. A few more minor improvements are scheduled for the fall before more major bike infrastructure is carved out where there are the most bicyclists and the most crashes recorded, according to a report issued Monday by DePasquale, transportation director Joseph Barr and other officials.

By that time, Simmons said she hoped to have a template for neighborhood outreach before and after a project is installed and a single point of contact for each project. She was also interested in exploring bicycle license plates – clearly a regional issue.