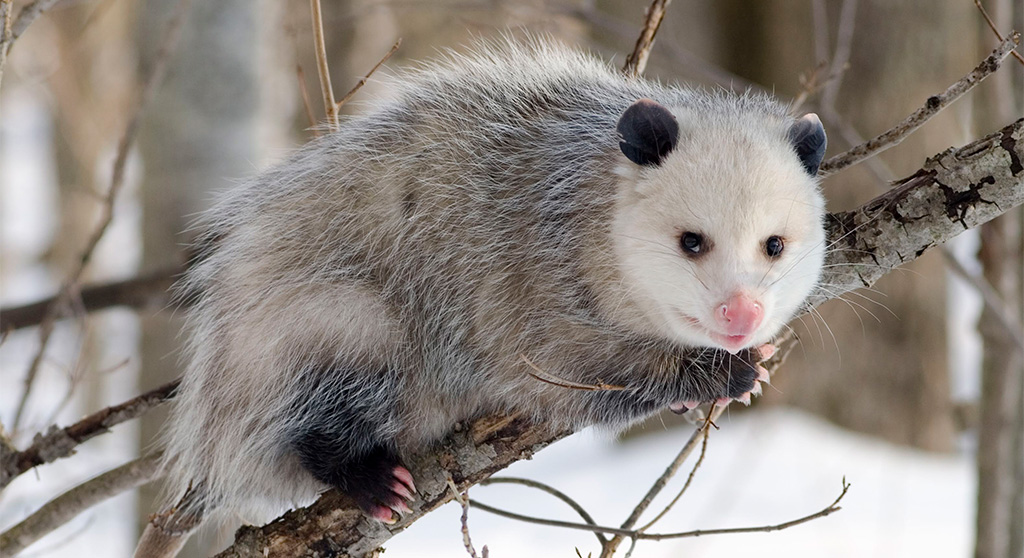 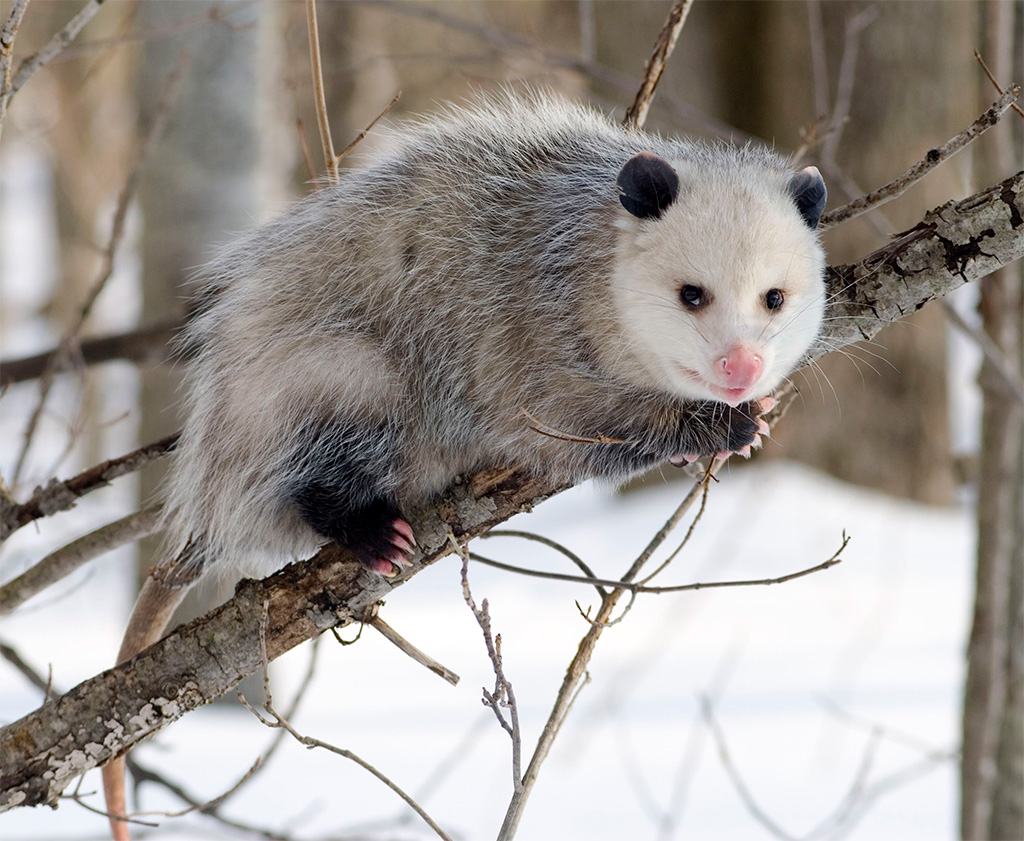 Possums age rapidly and have a lifespan that is short for a mammal of its size – one to two years is typical. (Photo: Cody Pope via Wikimedia)

A coworker once said to me, “I saw the biggest rat ever last night. It was a big as a cat.”

I replied, “Was it white, by any chance?”

I replied, “Where I’m from, we call those critters ’possums.”

Although Virginia opossums (Didelphis virginiana), or possums as they are commonly called, look like giant rats with their long hairless tails and whiskery snouts, they are actually North America’s only marsupial. Native to South America and common in the U.S. southeast, these nocturnal critters are not especially well-suited for our colder New England climate. Their coats are thin, and their ears, tails and feet are almost hairless. Unlike some animals, opossums do not hibernate to survive winters; instead, they store up some fat but spend most winter nights like they spend most summer nights – looking for food. An opossum that has lived through a New England winter is likely to have a frostbitten tail, nose or ears. 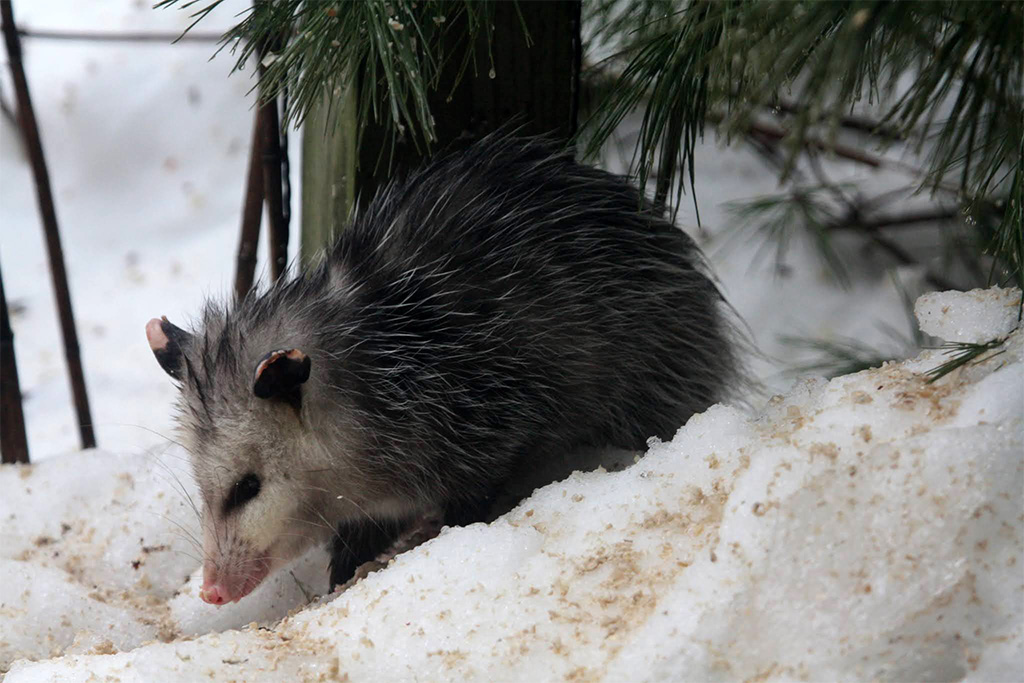 Because opossum ears, tails and feet are hairless, they easily get frostbitten in the snow. (Photo: Chris Buelow)

These creatures have been around for more than 20 million years. Europeans encountered the opossum for the first time when settling in Virginia. In 1624, Capt. John Smith wrote in “The Generall Historie of Virginia, New England & The Summer Isles” that “An Opassom hath a head like a Swine, and a taile like a Rat, and is of the bignesse of a Cat. Under her belly shee hath a bagge, wherein she lodgeth, carrieth, and suckleth her young.”

The name (Didelphis virginiana) gives clues to the possum’s anatomy. Didelphis means “two wombs.” The female opossum has a forked reproductive tract with two vaginas and two uteri. The male, likewise, has a retractable forked penis. Baby opossums are born after a gestation of only 12 days. The newborns are shaped like a lima bean but are the size of a grain of rice; they must wriggle from under the mother’s tail, onto her belly and into her pouch to latch onto one of 13 nipples. It used to be thought that possums were born from the mother’s nose. This idea probably originated because the babies are so small that no one ever noticed the birth. In addition, a female places her nose inside her pouch after the babies crawl inside. 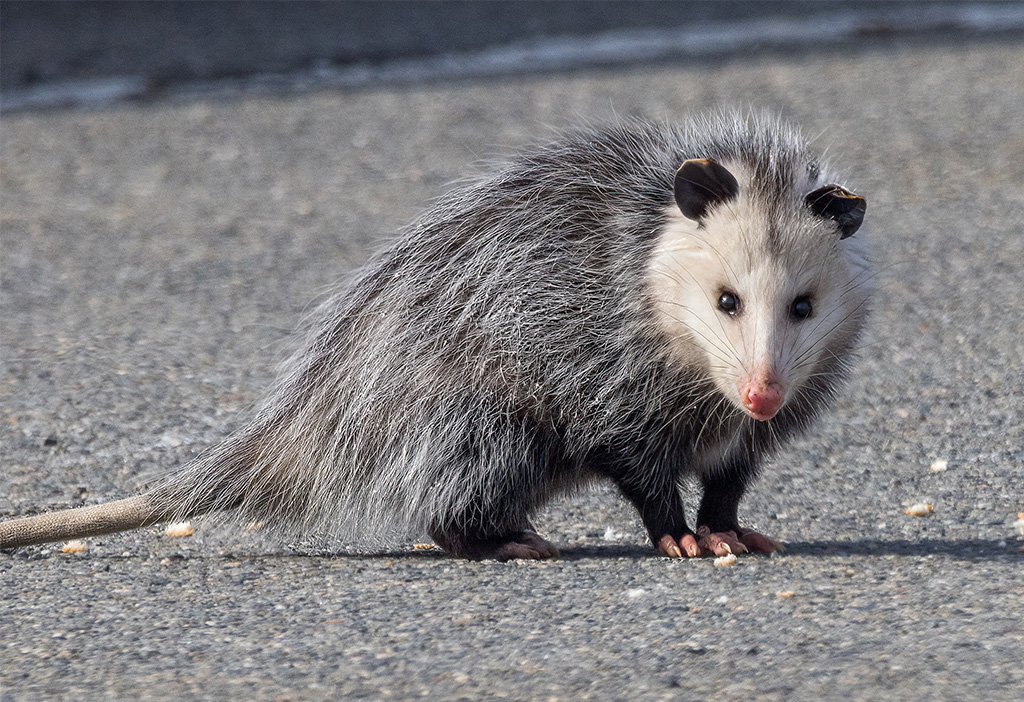 An adult opossum is about 2.5 feet long, including its footlong tail. (Photo: Richard George)

At birth, each possum baby weighs about 0.13 grams (for reference, a small paper clip weighs about one gram). After about two months, their eyes open. The babies continue to nurse and grow in the pouch for about 2.5 months. When they are too large to remain in the pouch, they climb onto their mother’s back, where they are carried until they are about 8 inches long and several months old.

For many years, naturalists wondered about the mysteries of opossum birth. John James Audubon in 1854 wrote:

The manner in which the young at birth reach the pouch, and become attached to the teats, has been the subject of much speculation and inquiry … We intended to dissect a small female Opossum, which had been a few days in our possession, but ascertained in the morning at seven o’clock on the day our examination was to have been made, that she had three young in her pouch; supposing from her small size, that she would produce no additional number, we concluded to spare her life. She was confined in a box in our study; the pouch was occasionally distended with her paws; she was busily employed with her nose and mouth licking … At six o’clock in the afternoon we were induced to examine her again  … We discovered that she had added four more to her previous number, making her young family now to consist of seven … We removed three of the young from the teats, one of which perished under the process, we replaced the two living ones in the pouch; at nine o’clock examining her again and found both the young once more attached. We came to the conclusion, that she shoved them into the pouch, and with her nose or tongue moved them to the vicinity of the teats, where by an instinct of nature, the teat was drawn into the small orifice of the mouth by suction. 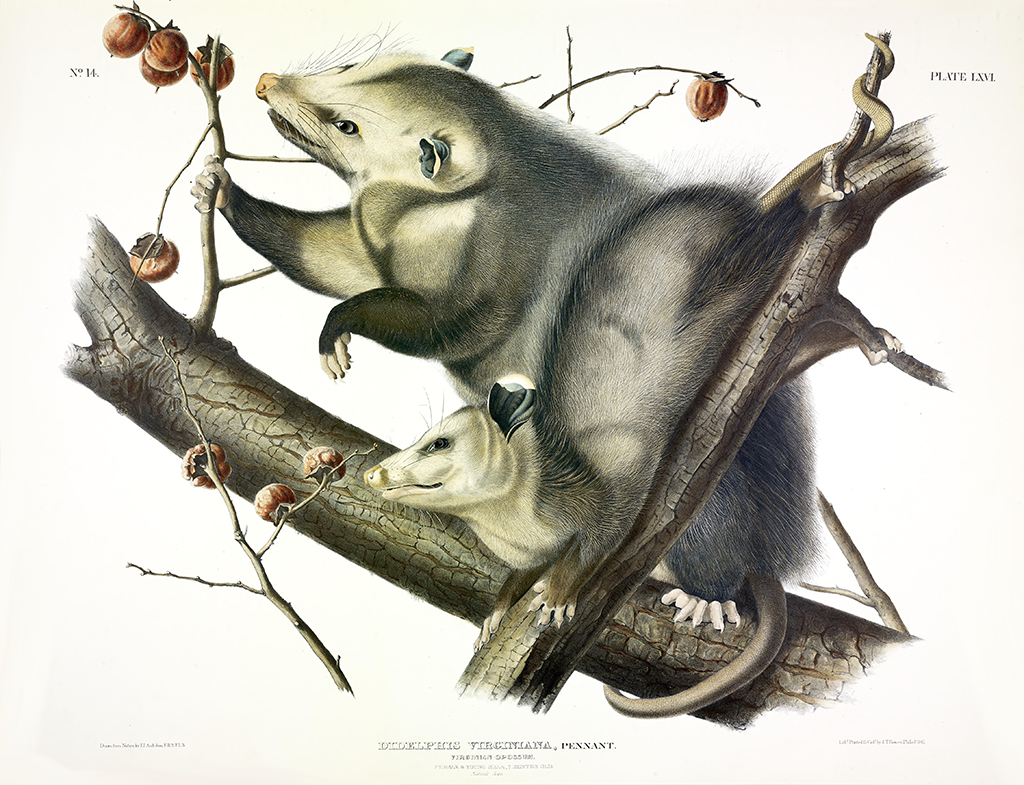 Audubon’s friend described an opossum birthing process this way: “The female stood on her hind legs, and the body being much bent, the young appeared and were licked into the pouch.” The friend’s observation is still not quite correct, but it is getting closer. Today it is thought that after birth, the female licks to help the youngsters find the pathway to the pouch.

Possums are unusual in other ways too: They have 50 teeth. Humans and most other land mammals have about 32. (My dog once brought inside the jaw bone of a small mammal. I am not any kind of an expert on jawbones, but it had a prodigious number of teeth and I was able to determine with the help of Google that it was the jawbone of a possum.) Opossums also have a prehensile tail they can use to grasp branches or to help balance. Baby possums may use their tails to hold onto their mother as they ride on her back. 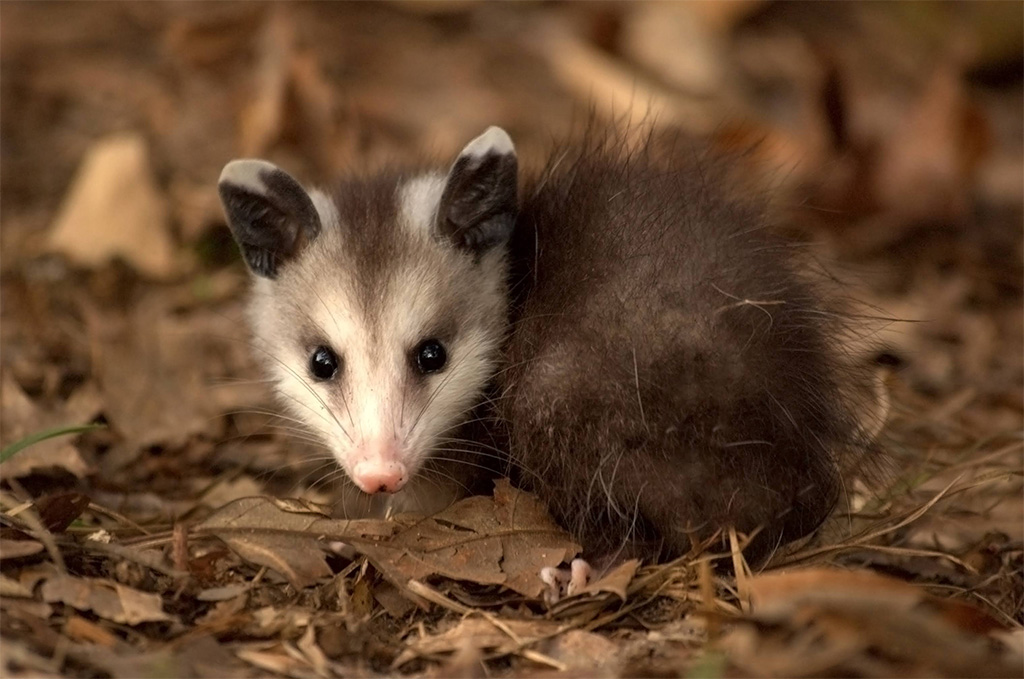 A young opossum blends in with oak leaves. Due to opossums’ low body temperature, the rabies virus does not thrive in them, and they rarely contract the illness. (Photo: Liam Wolff via Wikimedia)

Possums eat rats and mice, snails and slugs, cockroaches and beetles. They also eat dead animals, eggs, fruit, pet food and garbage. When opossums stop on streets to eat road-killed animals, they run the danger of becoming road kill themselves. Owls, raptors, coyotes and dogs prey upon opossums. When threatened, opossums growl, hiss and bare their teeth or climb a tree to escape. If they are unable to escape, they “play possum” by falling over as if dead, curling up in a ball, opening the mouth, drooling and excreting a foul-smelling liquid from the anal glands. When the possum thinks danger has passed, it moves its ears to listen and lifts its head. When in the clear, the possum walks away none the worse for wear.

My uncle tells of a time when one of his dogs on his Oregon farm carried in a possum and deposited it behind the couch. His grandson, about 2 at the time, repeatedly pointed behind the couch and said, “kitty.” My aunt assured the boy that the kitty was in the kitchen, but the toddler was so insistent that my aunt finally looked behind the couch, where she found the dead-looking possum. She swept the possum out of the house with a broom, where it lay in the dirt for a few minutes and then scurried away. 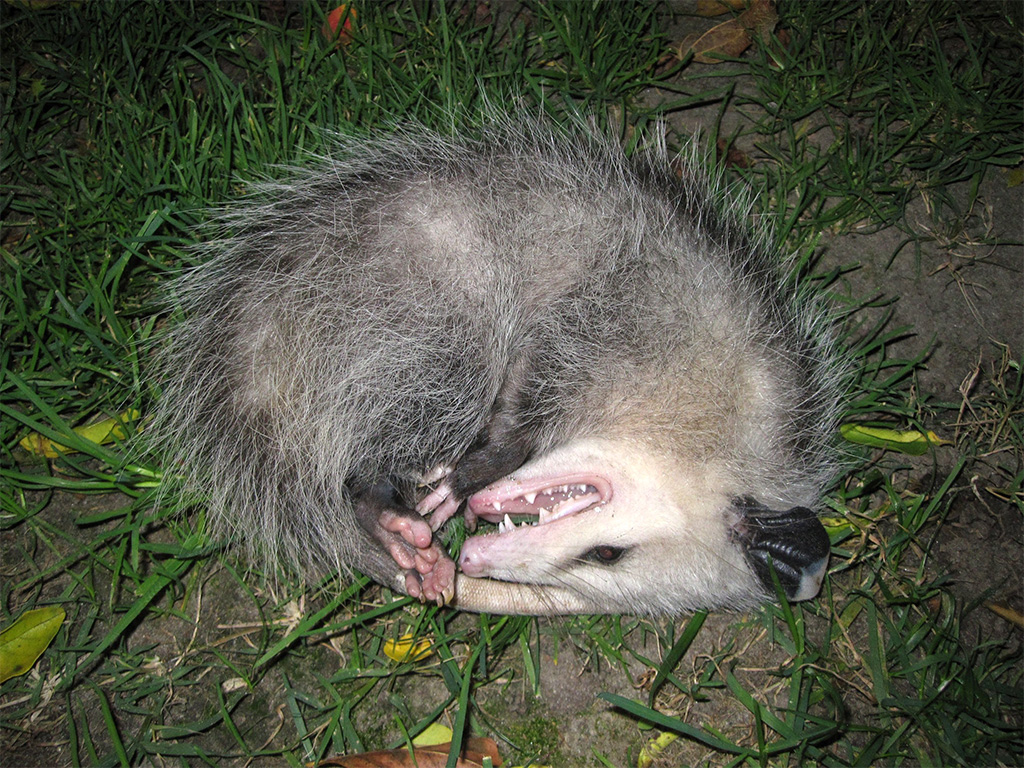 When opossums play dead, they curl up into a ball until danger has passed. (Photo: Tony Alter via Wikimedia)

A brood of young [domesticated opossums] with their mother made their escape, concealed themselves under a stable, and became partially wild; they were in the habit of coming out at night, and eating scraps of food, but we never discovered that they committed any depredations on the poultry or pigeons. They appeared however to have effectually driven off the rats, as during the whole time they were occupants of the stable, we did not observe a single rat on the premises.

This rat observation is interesting because when I moved into my Somerville home more than 20 years ago, opossums, skunks and feral cats were all quite common, but there were few, if any, rats. The feral cats were captured, spayed or neutered, returned and eventually died out. As the cats disappeared, the rats increased. Today, I never see opossums or skunks, but we are overrun with rats. I didn’t think the decrease in the opossum population had anything to do with the increase in the rat population, but Audubon’s observation makes me wonder what role the opossums might have played. 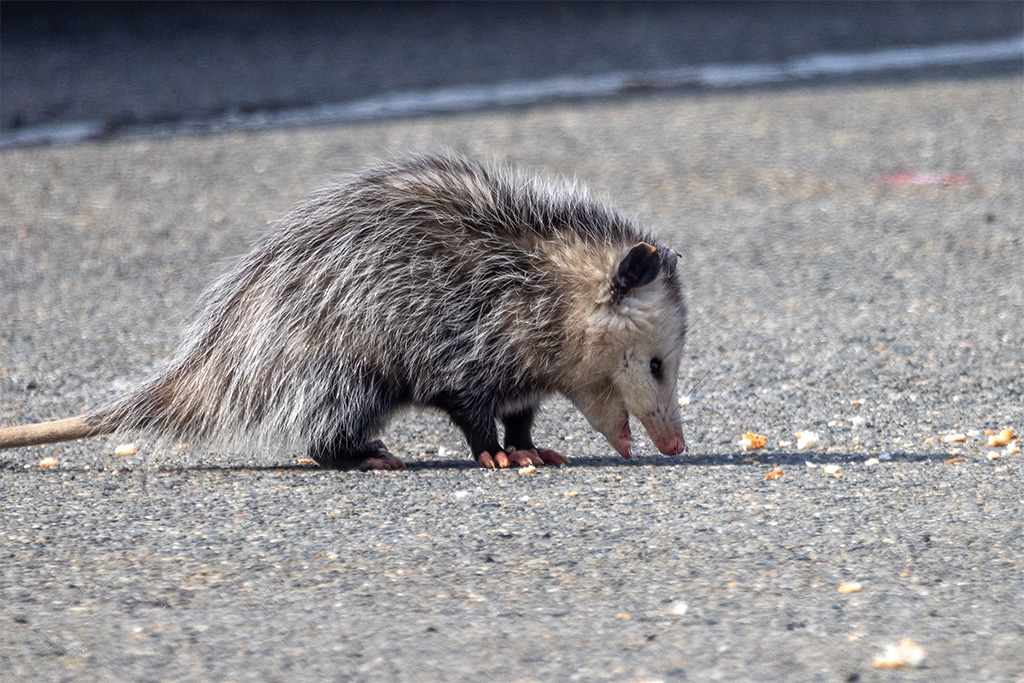 A opossum scavenges for food on a Quincy path in March. (Photo: Richard George)

Opossums have been heralded as tick vacuum cleaners based on a 2009 study that exposed caged opossums and five other species to 100 ticks each. Possums are fastidious groomers, and if they find a tick on themselves, they swallow it. The researchers determined that the opossums consumed 97 percent of the ticks they encountered. Based on this evidence, the scientists concluded that possums may consume up to 5,000 ticks per season. In a 2021 study, though, researchers looked for ticks in the stomachs of 32 Virginia opossums. They found none at all. These researchers concluded that ticks are not a preferred food for opossums, and that opossums are not the tick vacuum cleaners they previously had been proclaimed to be.

Perhaps the creatures’ most remarkable feature is their pouch. According to Mark Twain, “The first American marsupials were Stephen Girard [one of the wealthiest men in America], Mr. Astor [the wealthy business magnate] and the opossum.” I don’t think I’d dishonor the poor opossum by linking it to such big-pocketed people, but the opossum is a truly remarkable and intriguing critter. 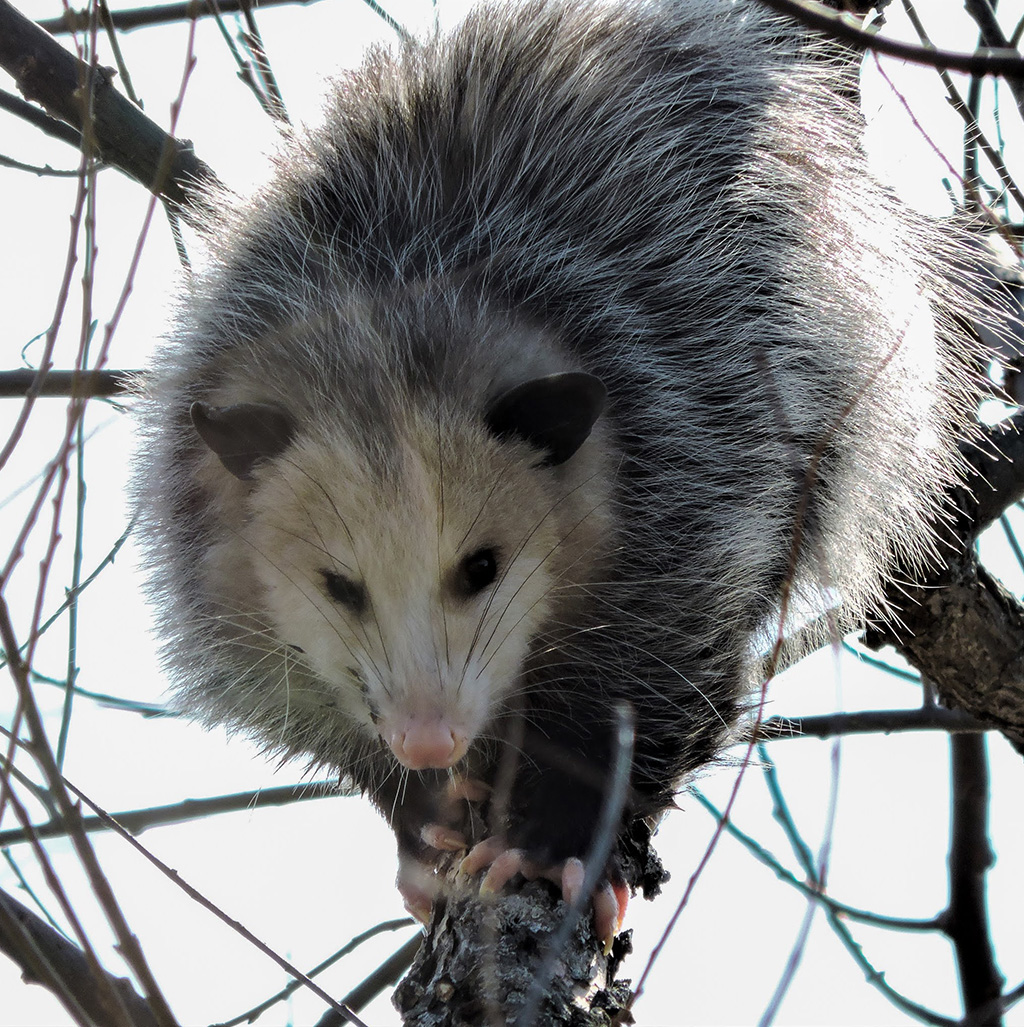 An opossum descends from a tree at Jerry’s Pond in Cambridge in March. (Photo: Ann Schlesinger)