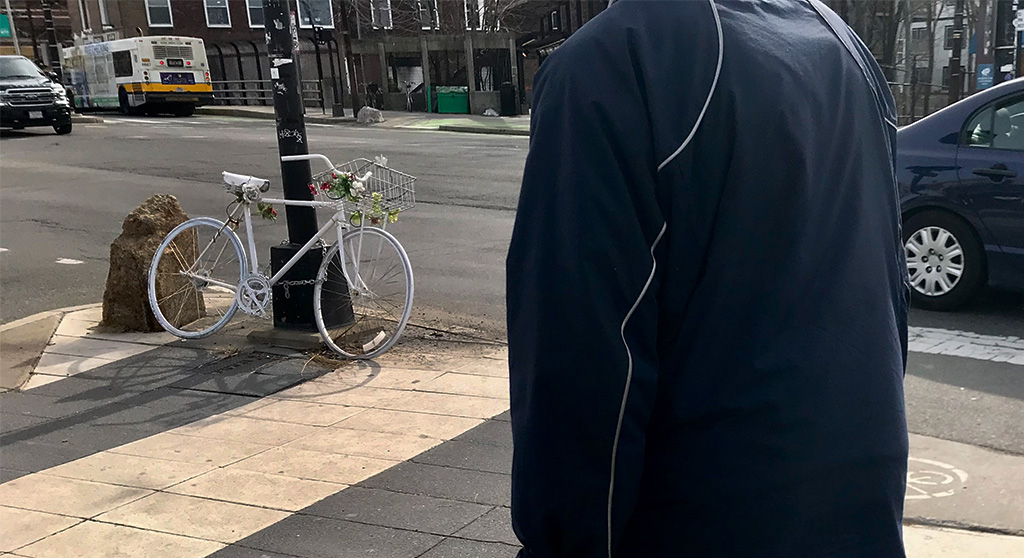 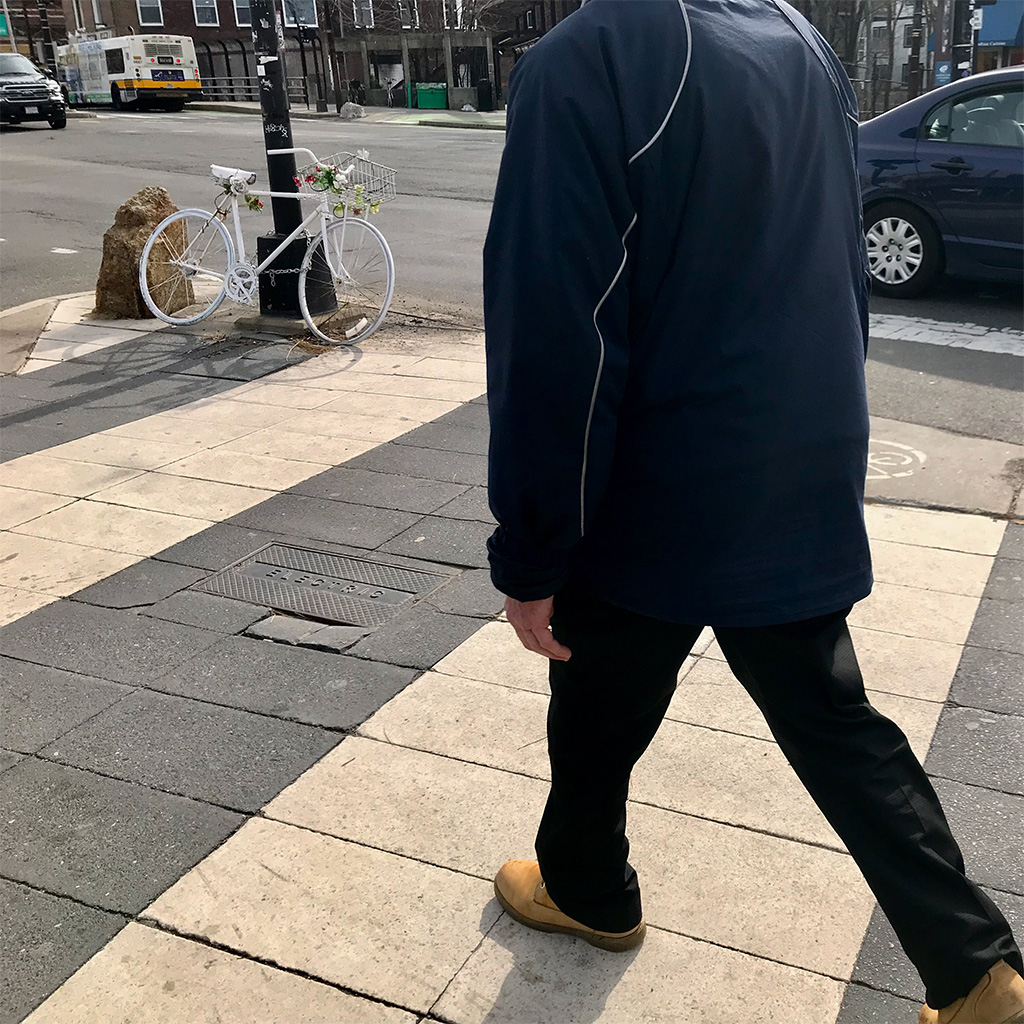 Modes of transportation swirl in 2018 around a “ghost bike” indicating a dead bicyclist in Porter Square. (Photo: Marc Levy)

An attempt to delay the “quick build” of bike lanes through Porter Square by up to four years failed Monday on a City Council vote of 6-3. The majority of councillors, in opposition, pointed to the lives that could be saved with safer cycling infrastructure, while councillors who brought forward the order said that replacing parking spaces with bike lanes meant the death of businesses.

A second order that could have delayed and constrained the design and installation of Massachusetts Avenue bike lanes – by making their construction contingent on the removal of a median strip and overhead trolley wires – was also easily rejected, on a 7-2 vote.

Finally, in a related issue delayed from a meeting two weeks ago that made up a third vote, councillors voted 8-1 to formalize the $55 million plan to install protected bike lanes along four particularly difficult stretches of Massachusetts Avenue known as the MassAve4.

In the first of the night’s defeated orders, the Porter Square work would have been added to the MassAve4 and waited for more complicated “partial build” bike lane construction instead of quick build, which usually includes repainted lines and flex posts that physically separate cyclists from other traffic. 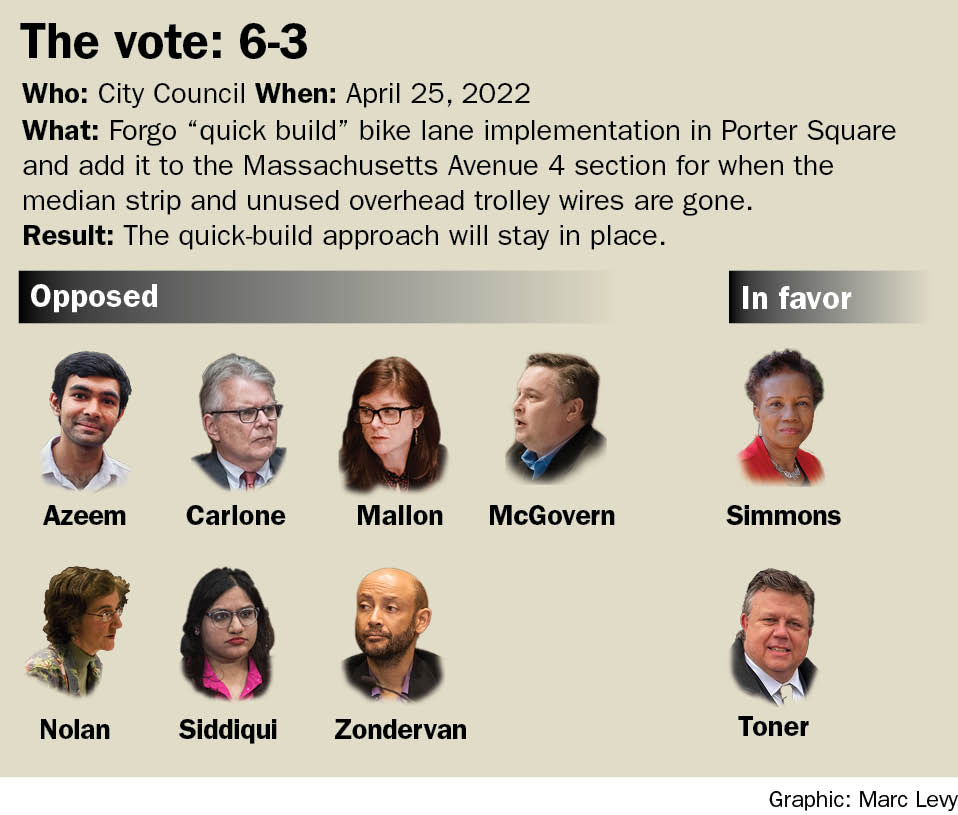 By waiting for a partial build with the median and overhead catenary wires gone, up to half of Massachusetts Avenue parking between Porter and Harvard squares may be saved, while without it all or nearly all of the parking would have been eliminated. Within Porter Square itself, going to a partial build would have saved 17 parking spaces on the avenue out of the current 34; a quick build will eliminate all, with councillors and staff promising to look for ways to mitigate the loss.

But the $2 million quick build is intended to be adjustable, and it can also be undone easily for a later partial build, Traffic, Parking & Transportation Department head Joe Barr said.

The new policy orders introduced by councillors Paul Toner, E. Denise Simmons and Carlone threw the debate on bike lanes into a higher gear after extensive debate of the quick-build bike lanes in Porter Square in March, when the council took an unusual step: instructing Traffic, Parking & Transportation to break the Cycling Safety Ordinance by delaying the installation of quick-build bike lanes in Porter Square until the fall, at the latest, to allow more time for community outreach and engagement.

In breaking with his election pledge to follow the ordinance, Carlone said Monday that he had come to oppose seeing Porter Square torn up a second time when more permanent bike infrastructure is eventually installed, especially when so many other sections of the city were getting full-build bike lanes. “The only area that is not is the poor stepchild of Porter Square,” he said.

A potential bright spot at the meeting came from city engineer Kathy Watkins, who suggested that efforts to encourage fast removal of the Porter Square catenary wires by the MBTA were working. “I’ve had extremely positive conversations in terms of getting the right people at the T very focused on this issue,” Watkins said. “The conversations we’re having are about this summer. So this is not looking at a five-year plan.” The city wants rapid removal of the rest of the catenary system to follow; Toner repeated a suggestion Monday that the city do it and be reimbursed by the state.

Bike lanes through Porter will be done “this construction season, which means sometime this fall at the latest,” Barr told councillors March 7.

Outrage over the idea of delaying protected bike lanes in Porter Square within the bike safety community was palpable over the weekend. “I have supported every single study, postponement and funding request. I wanted to show that we needed bike lanes but we’re acting in good faith to find the best solution. This is a bridge too far. Enough is enough. I’m done acting like every compromise is not enough,” councillor Azeem tweeted. He expanded on the thought at the Monday meeting.

On Sunday, the Cambridge Bike Safety group released a statement calling the current status of Porter Square an “urgent safety situation that requires immediate quick-build action.” The group expressed concern over the “entirely backward policy proposal” that would prevent city staff from beginning, designing or installing bike lanes until the catenary wires are removed by the MBTA.

Ahead of Monday’s meeting, city councillors took to Twitter to telegraph their views on bike lanes. “Delaying bike lane implementation is choosing unsafe conditions for cyclists. As a city we can’t continue to make that choice,” tweeted vice mayor Alanna Mallon. Toner, on the other hand, sought to defend his policy orders, saying “Installation [of bike lanes] should not begin until the wires are down. The lack of trust in our city government among residents and businesses in this stretch is palpable.”

Reaction on the council

The council meeting was well attended, with more than 150 residents commenting on the bike lanes. As in recent weeks, the comments were largely divided and reflected a continued growth of disagreement in the community over the issue. “I can’t really think of an issue that I have seen so equally divided,” said councillor Marc McGovern, noting the tension in the room.

Councillors in support of the MassAve4 plans and against the two policy orders were clearly in the majority. “I am frustrated by all of this,” councillor Quinton Zondervan vented. “We’re already agreeing to allow a longer timeline to mitigate some parking effects, and yet we’re being told that is not good enough, and we need further delays to make sure the wires come down.” 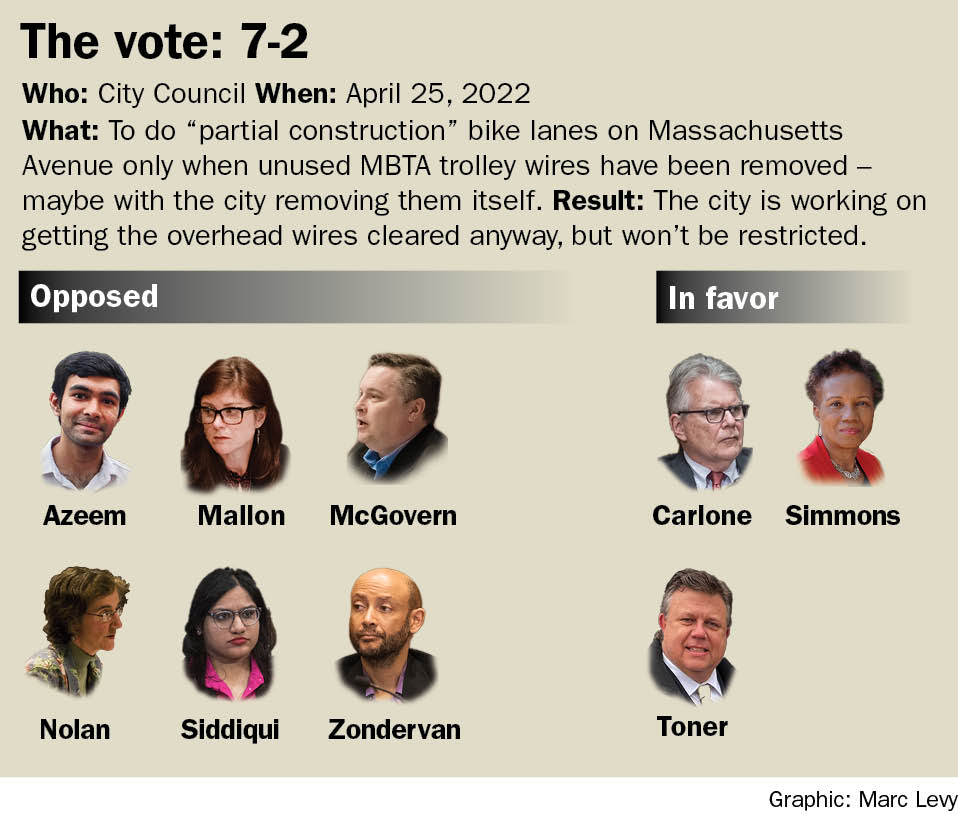 For many councillors, the issue came down to safety. “This isn’t about pledges, it’s not about politics, it’s about safety. Tonight and every time I will vote for safety,” Mallon said.

“I can’t hold my breath for the next four years hoping that someone doesn’t get hurt. I can’t support delaying an unsafe intersection. I do pledge to do everything I can to mitigate parking loss,” McGovern added, summing up his thinking that the vote came down to risking bicyclists’ lives or saving 17 parking spaces. (Carlone saw it differently: “It is not 17 parking spaces, it is seven storefronts – seven businesses that will be dead,” Carlone said. “And there are two restaurants that want to open up who have spoken to a number of us that are not going to move forward if there is no parking in Porter Square.”)

Councillor Patty Nolan, who has become a swing voter on the bike infrastructure issue in recent months, decided ultimately to reject the two policy orders. “My vision for the city is to be a model. If we delay this and if we don’t move forward, it will be very problematic and very challenging for us to be a model,” she said. “What’s best for the city is for us to move forward with the current cycling ordinance.”

Locking in the votes

In the end, Simmons was the lone dissenter in the third vote, going against the $55 million plan for the MassAve4 partial reconstruction. Simmons, Carlone and Toner voted for their first policy order; Simmons and Toner were in favor of the second, but Carlone voted against despite his cosponsorship. Carlone couldn’t be reached immediately after the meeting, which stretched past 11 p.m. after starting with nearly three hours of public comment.

Councillors locked in their decisions, taking votes against allowing reconsideration. This enacts the orders immediately instead of waiting for them to become permanent Wednesday, which prevents councillors on the winning side from changing their minds and bringing the issues back to be argued again.

The battle over bike lanes is far from over, though. The next community meeting for plans for Porter Square is at 6 p.m. Tuesday and can be accessed here.

This post was updated April 28, 2022, to correct the order of votes represented in the graphics.