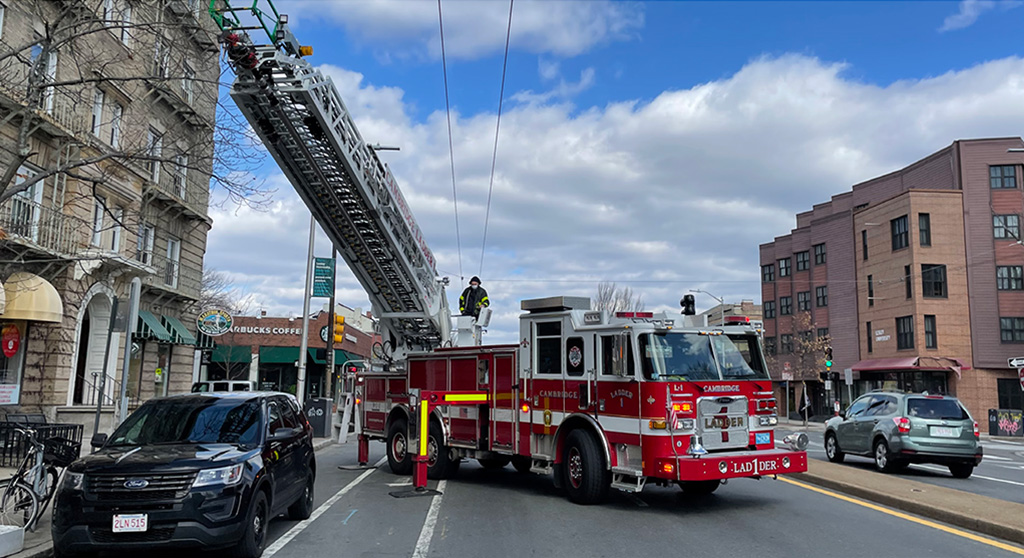 City councillors want to take down overhead catenary wires that once powered trolleys along Massachusetts Avenue – and constrain activities from parking to firefighting. (Photo: City of Cambridge)

A $55 million plan to complete the buildout of separated bike lanes on Massachusetts Avenue by 2027 was considered Monday by the City Council, but councillor Dennis Carlone exercised his charter right – delaying a vote until the next meeting, two weeks away.

At the same time, city staff offered a small update on the economic analysis requested by the council in February: Data collection for the report is expected to start this spring, with a report delivered by a consultant in the fall. The city is ready to reach out to an almost-complete list of potential participants for a business advisory group and hire an outside facilitator to run it, Traffic, Parking & Transportation Department head Joe Barr said.

The city is working to fulfill its obligations under the 2019 Cycling Safety Ordinance to install protected bike lanes along Massachusetts Avenue. Monday’s discussion focused on the so-called MassAve4 – four particularly difficult stretches – that required special analysis from the transportation department and outside engineering agencies. An 80-page report delivered to the council Thursday calls for more than two miles of new protected bike lanes to be completed by the end of 2026. Final approval for the project is required by May 1.

The work would total $55 million – $15 million for full construction of raised bike lanes around two bus stops by Harvard Yard (between Church and Garden streets and Plympton and Dunster streets) wrapped up by mid-2025, and the rest for areas closer to Porter Square that would eliminate some parking. That alarms business owners and some drivers, though the proposal to do “partial builds” on a couple of segments instead of “quick builds” would keep up to half the parking the avenue has now.

The temperature on the council felt lukewarm because bike lanes continue to be divisive in the community, but a majority of councillors – Burhan Azeem, Patty Nolan, Marc McGovern, Vice Mayor Alanna Mallon and Mayor Sumbul Siddiqui – expressed support for the project as written, suggesting it will pass when the council votes in two weeks.

“I’m very excited about the plan. We’re working toward a great, comprehensive solution. Recent public meetings have been overwhelmingly in favor of the partial-build option. It strikes a great balance between people who bike, take transit, small businesses and neighbors,” Azeem said in a message Monday.

Those skeptical repeated concerns about the lanes from the past six months. “I would like to be a believer, but I guess I’m not,” councillor E. Denise Simmons said of bike lanes supposedly helping businesses despite replacing their parking. She earlier called the lanes “privileges” underwritten by other constituencies in the city – a statement sure to rile up some in the cycling community who see protected bike lanes as a matter of life and death. “We should understand why the business community and others would be hesitant to jump fully on board with this proposal,” Simmons added.

The fact that only 8 percent of residents commute to work by bike and that the figure isn’t growing faster is “rightfully” leading many to believe “we are just catering to a very small percentage of the city,” while far more walk or use public transit, Nolan said. Without making more of an effort to transition people away from cars, “however much money we’re spending for only 8 percent of our residents. It’s just unfair to the rest of the residents.”

Barr objected, mildly, to using only commuters as a benchmark. While he wished the shift was happening faster, 8 percent was strong compared with many communities – and the same survey cited by Nolan showed that more than half of Cambridge residents bike at least once or twice a month. “There is very significant bike usage in Cambridge,” Barr said.

Others expressed a simple sticker shock at the proposed budget, though. “We’re talking about spending $55 million for what is a short-term project. We’re ultimately going to come back and tear that up so that we can do the sewer and water project,” councillor Paul Toner said. “I also think we are putting a self-imposed deadline on ourselves to our detriment.”

Toner called for amending the Cycling Safety Ordinance to give the city more time and flexibility to implement protected bike lanes.

A letter from the city manager and the transportation department report calls for “partial construction” along the segments of Massachusetts Avenue between Dudley and Beech streets and Roseland and Waterhouse streets. It entails removing the concrete median to make room for protected bike lanes but not reconstruction of the full road or underground utilities. City engineer Kathy Watkins noted on Monday that including redoing underground sewers and pipes would add hundreds of millions of dollars to the cost and potentially years to the timeline.

The $40 million buys 10 to 15 years of protected bike lanes before “it is time to do a full utility project,” Watkins said, and “certain pieces of work that we’ve done will still be valuable.”

Proposed timeline of the MassAve4 projects by city staff.

This partial construction strategy was strongly hinted at as the desired approach in a February meeting because it retains 40 percent to 50 percent of parking in the corridor, pending the removal of overhead catenary wires that were once needed to power MBTA trolley buses. The wires were recently de-electrified, but an MBTA estimate in February suggested the wires could stay up until late 2023 or early 2024. That lines up with a preliminary timeline outlined by City Manager Louis A. DePasquale that would start partial construction in early 2024 and complete it by the first half of 2025.

“Scares the living daylights out of me”

No one trusts the MBTA to follow through, though.

“We’re relying on the MBTA … so that we can maintain a few parking spaces. That scares the living daylights out of me. I have never known the MBTA to get anything done at a promised time,” Carlone said. “We have to apply much more pressure. We’re talking about two days’ work by two people in a truck” for the wires only.

If Public Works loaned a cherry picker truck and a pair of bolt cutters, Toner joked, he and Carlone would go take care of the wires themselves.

Signaling his charter right, Carlone said, “the fact that we cannot get the MBTA to commit, or [else we commit to act on our own and] take down the wires in Porter Square, is enough for me to say I should stop this and talk about it in two weeks.” He wanted city staff to work harder to get a commitment from the state – though Watkins noted that the city didn’t even know the catenary wires would be de-electrified when planning for the area’s bike lanes began two years ago.

The council will reconsider the proposal April 25; next week’s meeting is canceled for the Easter Monday holiday.