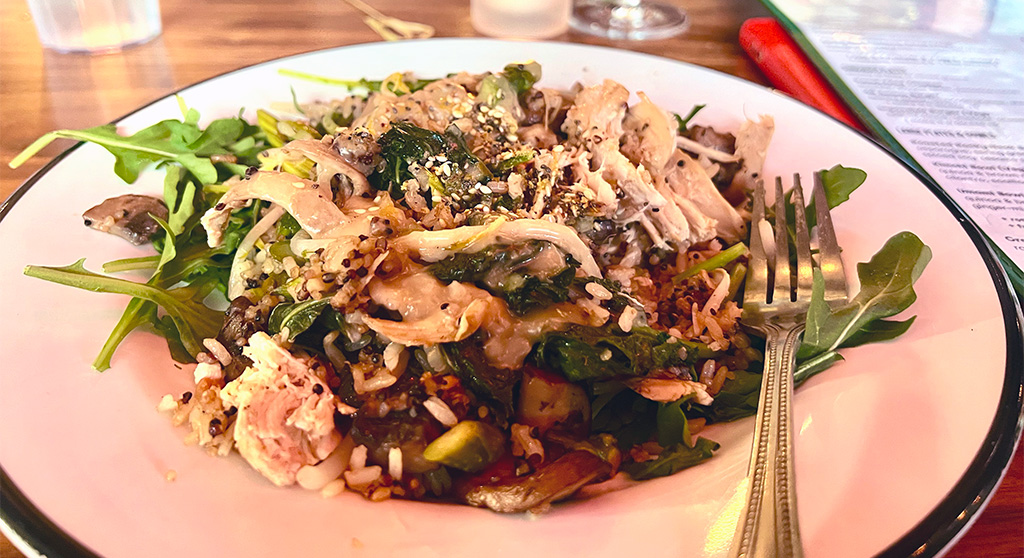 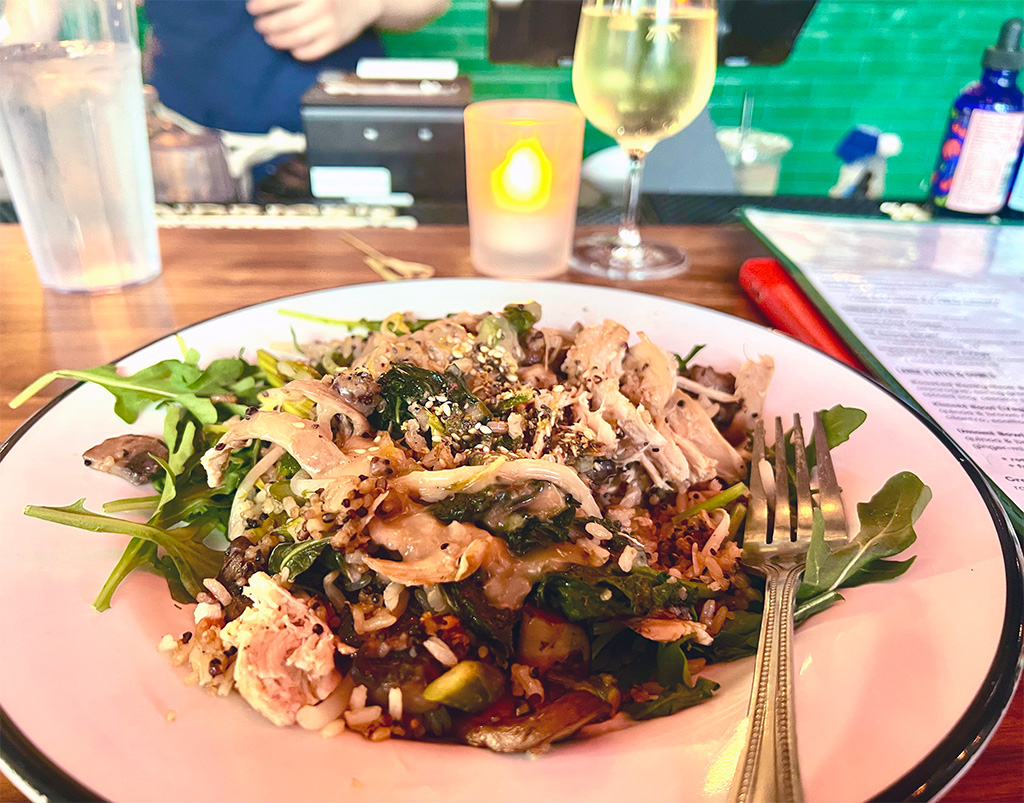 We’ve talked a lot about grain bowls here. They’re clearly a thing, and with good reason, being healthy, nutritious and satiating with an olio of flavors and textures all in one farro-lined bowl. One of my new-found fave versions is the Umami Bowl with roasted chicken at Shy Bird.

Chicken is what Shy Bird does – I mean, the name, right? – as the sister eatery of Branch Line in Watertown, which also makes its bread and butter via roasted poulet. “Umami” in culinary terms is the fifth basic taste alongside sour, sweet, bitter, and salty; essentially it is savory, and so is the Shy Bird bowl with its quinoa and brown rice base, sweet potato, kale and mushroom toppings, ginger-miso dressing and power bowl crunch. You add the chicken, fried or roasted, as an extra … but consider it mandatory. (There’s also a Kimchi Bowl.)

The main item Shy Bird offers is half and whole roasted birds (you see them slow roasting as you get your waitlist number at the host stand) as well as a ranch-fried chicken sandwich that looks juicy and sinful. Other good things on the menu are the soups (now a carrot ginger that’s well-spiced and perfect for the season, but the chicken soups that come up in the fall and winter are ones for the soul) and the Eastern Standard Pretzel that Oprah loved so much. (The now-closed Eastern Standard restaurant in Fenway gave birth to the highly sought doughy treat, which became a stand-alone spinoff of Garrett Harker, the former Eastern Standard co-owner who also co-owns Branch Line with Andrew Holden, who opened Shy Bird in 2019 – lots to unpack there.)

Shy Bird has an open, inviting space and sidewalk patio at the base of the CIC coworking center in the heart of Kendall Square. It operates cafe-style during the workweek, when it’s open for breakfast; during weekday lunch and post-work hours there’s always a wait for a table. It serves brunch on the weekend.

Every time I’ve been to Shy Bird there’s been a lively crowd. Last time I was in for a fast nosh of that Umami Bowl, the gent who sat down next to me began shouting to the bartender in my ear. He quickly apologized, introduced himself and told all of us abutting him that it was his birthday and he had sold his startup to Google moments before landing at the Bird – and that we were all eating and drinking on his tab. The tip he left the bar staff exceeded three figures.