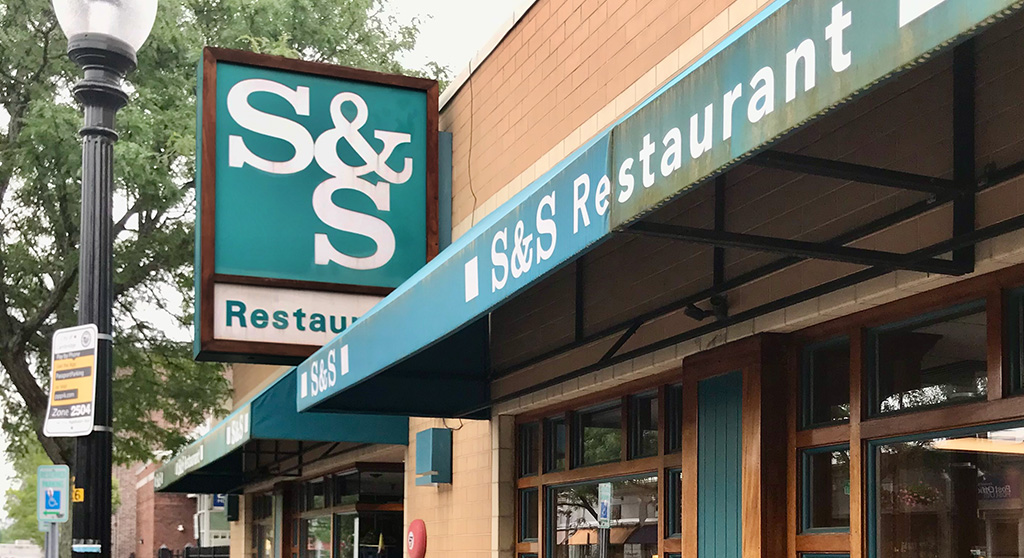 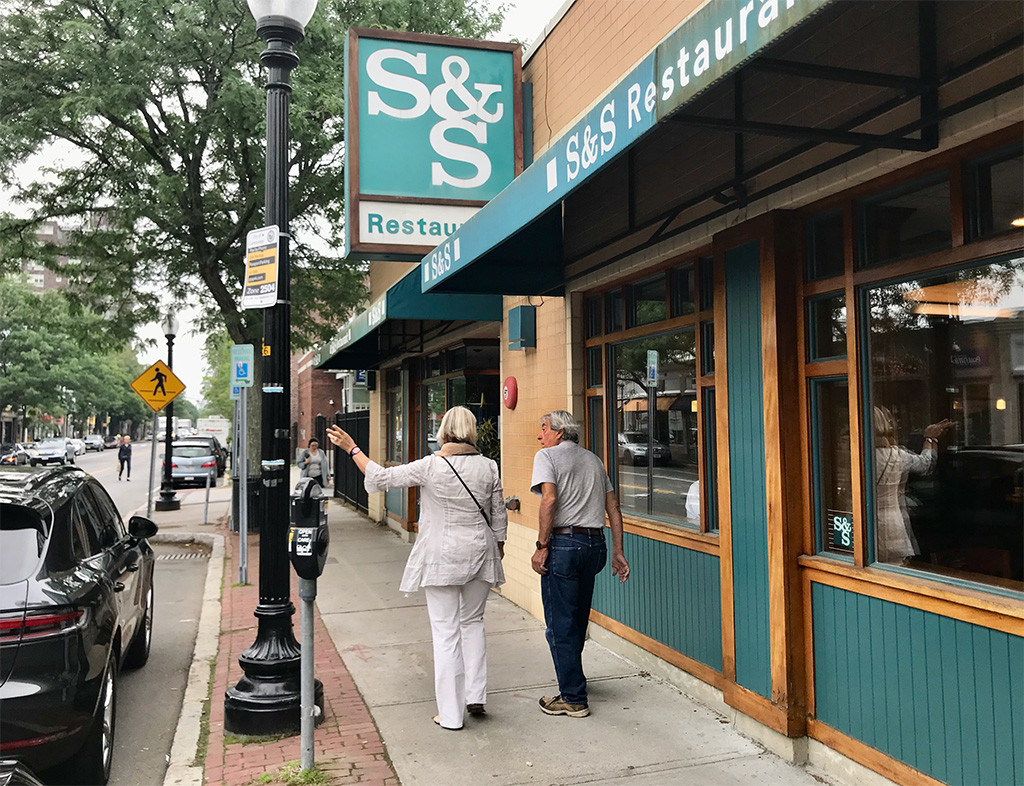 In the decade preceding Cambridge Electric Light’s illumination of Cambridge Street, when trolley tracks ran from Inman to Porter Square, a little delicatessen began welcoming hungry patrons. From its opening in November 1919, Rebecca “Ma” Edelstein greeted guests with “es and es,” Yiddish for “eat and eat” – the phrase that lent the restaurant its name. The S&S Restaurant has remained in the family over four generations, and what an enduring enterprise it has been. Today, the S&S is run by Ma’s great-grandchildren, Gary Mitchell and his sister, Amy Baum, along with their loyal staff.

In 1924, Rebecca’s daughter, Lottie, and her brother, Barney, managers of S&S’s store, began to manufacture their delicatessen specialties such as fish cakes and potato salad for other retailers. In 1926, Lottie married William Wheeler and he joined the business. Lottie later bought her brother out.

In 1935, the S&S moved from 1307 Cambridge St. with a big celebration to its present 1334 Cambridge St. location, where one found “home-like meals, friendly service and modest prices.” The S&S created jobs for at least 10 people during the Depression; many of the early workers were Eastern Europeans immigrants from Inman Square – Jews from Poland and Germany. Diversity of the staff evolved as new residents moved nearby from places the world over. Many of S&S’s current staff have been with the restaurant since the 1970s and ’80s. It is everyone’s home away from home.

Though known as a deli, the S&S didn’t strive to be a Jewish deli like Jack and Marion’s in Brookline – but did carry staples of the cuisine such as knishes, blintzes, bagels, matzo ball soup, bagels and lox, sour pickles and white fish. The menus reflected the tastes of the immediate community, whether it be chicken pot pie, pot roast or the freshest seafood for those observing “fish on Friday.” People over the years came and continue to come to S&S for their comfort foods, even as the business added more vegetarian options and kept up with other trends.

From the beginning, S&S Restaurant was a neighborhood place and attracted regulars who sat at the counter stools. Some workers came every day for lunch – first men and then, gradually, women, as they joined the workforce in greater numbers. Before the days of television, the S&S bar was a place for many to meet and enjoy a 15-cent Knickerbocker beer that was quite popular. “We had one of the first Carrier air conditioners,” Lottie told Cambridge Chronicle reporter Jane Thurman in 1987. “People used to come in just to look at it.”

In 1956, S&S remodeled and celebrated with a June open house. “Nothing has been spared in providing particular persons with the finest in food and liquors,” an ad said. In 1957, S&S began to serve Schrafft’s locally made ice cream, which was served at the fountain and in takeout containers. 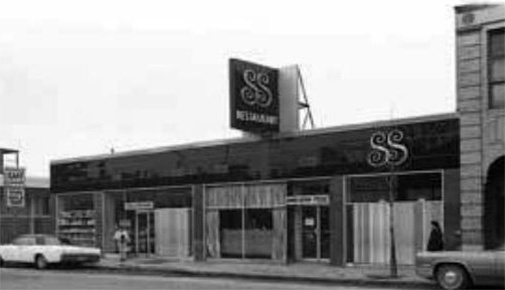 The S&S Restaurant in 1970, just before a remodel. (Photo: History Cambridge)

In the 1960s, Lottie retired from the business and her son, Robert, and daughter, Doris, took the reins. Doris married Chester Mitchell, whom she met in college. In 1972, another S&S remodeling was undertaken.

In the 1980s, Doris and Chester’s son, Gary, who began working at the deli counter at age 12, began to manage the S&S. In 1983, the S&S underwent a larger renovation. Architects Prellwitz & Chilinski designed the sleek look of the storefront using Honduran mahogany. To make room for a budding catering business, they changed the interior by removing the counter stools. Doris Mitchell said it was “painful.” The counter was “the focal point for many singles and older people,” she said. “It was never the same.” 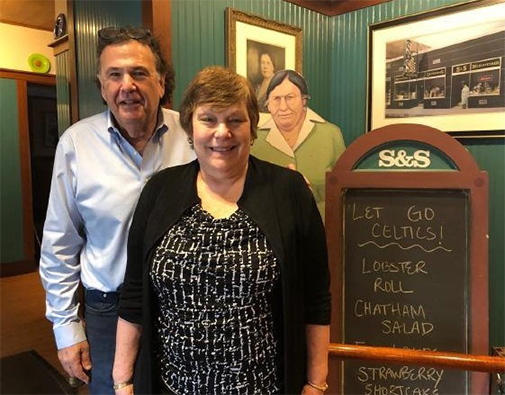 Gary Mitchell and Aimee Baum at the S&S with a cut-out of “Ma” Edelstein looking over their shoulders. (Photo: Deb Mandel)

In the 1990s, Aimee Baum began helping her mother with the catering and takeout business. Over the years, S&S has catered City Hall council meetings, Cambridge Rindge and Latin high school events, and many Cambridge functions and charity events.

On the occasion of the restaurant’s 75th anniversary in October 1994, the S&S planned a series of events. For a week, servers handed out mini birthday cakes to customers and announced a scholarship fund for CRLS students interested in the culinary arts. They buried a time capsule on S&S land including restaurant memorabilia and artwork by children at the Longfellow School, Doris’ alma mater.

In November 2019, S&S regulars, staff and members of the Mitchell-Wheeler families gathered under a heated tent to celebrate the family’s business centennial and unearth the 25-year-old capsule.

Members of the Mitchell-Wheeler families culled through it to retrieve mementos they had contributed and reflected on the restaurant’s success, longevity and many changes. You can read about the 100th anniversary and see great photos in Boston.com’s article about that day.

During the Covid pandemic, Aimee and Gary worked nonstop to keep S&S afloat – just the two of them for a while – staying open more limited hours to provide takeout services. Gradually, a few outdoor tables were added during warmer months and more staff returned as indoor dining increased.

One doesn’t go to the S&S only to get a bagel or a Reuben sandwich; it is more like visiting a local history museum, and Gary and Aimee are passionate tour guides. The restaurant’s walls are graced with beautifully hand-colored enlargements of historic photographs of the family and the neighborhood, old menus and articles about the restaurants. They tell the story of bygone days of there and in its beloved Inman Square, where traffic around the complex intersection of Cambridge and Hampshire streets was directed by a city employee.

Though many of the Inman Square eateries have come and gone, S&S remains a neighborhood anchor, a place to see familiar friendly faces, celebrate the home team and spice up the day with a tasty nosh.

Deb Mandel is a volunteer for History Cambridge.