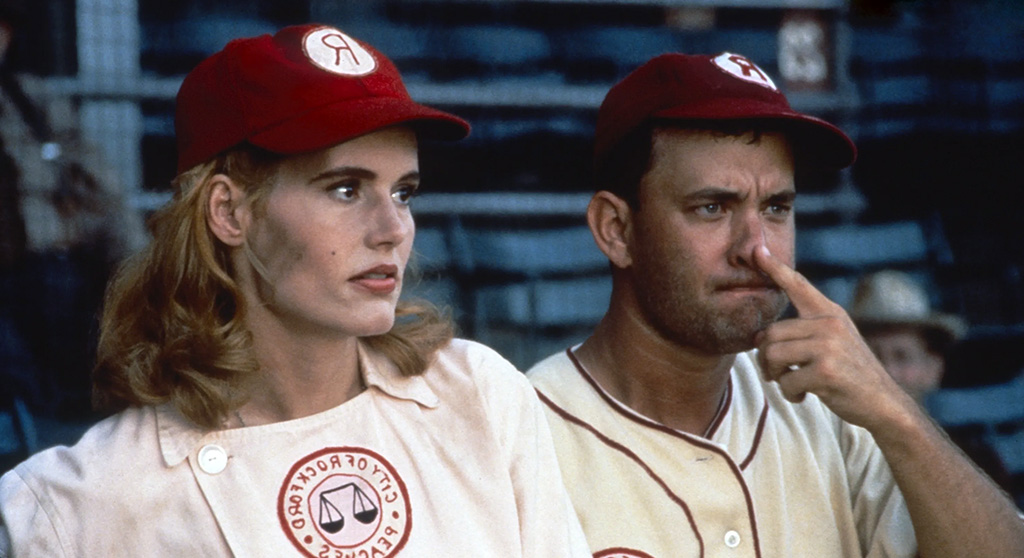 Baseball as a metaphor for how to live one’s life is nothing new; you’d think by now we’d have retired that number. Yet one can’t help going back to the genre’s Hall of Fame, MVPs that offer up sage wisdom on how to achieve success and find happiness on and off the field. Below are musings on five instant classics, all of which can be found on Amazon Prime Video (some for a fee).

“Don’t think. It can only hurt the ballclub,” the veteran catcher Crash Davis (Kevin Costner) advises the rookie pitching phenom Nuke LaLoosh (Tim Robbins) in Ron Shelton’s “Bull Durham.” Lo and behold, when Nuke steps on the mound repeating the phrase, “Don’t think, just throw,” the North Carolina Durham Bulls start winning. Local muse Annie Savoy (Susan Sarandon) takes Nuke in, shows him a good time, then channels his libido into his pitching arm. Stunned by the winning streak, Nuke gets religion, confirming Annie’s own take on God and baseball: “I believe in the Church of Baseball,” she says, then goes on to equate sex with our national pastime, informing us that “Making love is like hitting a baseball. You just got to relax and concentrate.”

Belief in one’s self and finding the hope and faith that things will turn out well figures prominently in Phil Alden Robinson’s “Field of Dreams.” Ray Kinsella (Kevin Costner, again!) hears voices telling him that “if you build it, he will come.” Building a baseball diamond in the middle of a cornfield somewhere in Iowa surely looks to be the act of a man gone off the rails, but when Shoeless Joe Jackson and his Chicago White Sox show up to play we, along with Ray and his family, know there’s no turning back. It’s only a matter of when the rest of the world will catch up. The film’s closing shot, a nighttime aerial with cars stretching to the horizon, winding their way to Ray’s ballpark, speaks eloquently to the rewards life bestows on us when we commit unflinchingly to an idea, a project, a cause or even another person.

As with life, in baseball loss of innocence or a shot at redemption may be in play. John Sayles’ “Eight Men Out” gives us the 1919 Chicago White Sox in their darkest hour, taking money to throw the World Series. The Black Sox, as they came to be known, had it all: youth, talent, drive, love of the game. Had they not surrendered to the temptations of the almighty dollar they most likely would have won the thing. It’s a cautionary tale; a reminder that doing what you love is its own reward.

Barry Levinson (“Diner”) has Roy Hobbes (Robert Redford) doubting himself right up to the end of “The Natural.” Hobbes is getting old and may be past his prime. Bruised and bleeding in the bottom of the ninth, at bat for the pennant, Roy needs to save his team and himself from oblivion or, worse, second place. Smashing the ball into the stadium lights, Hobbes takes his victory lap, reborn, leaving us misty-eyed and hoping we might one day also be redeemed.

Penny Marshall’s “A League of Their Own” is a nostalgic look back at the All-American Girls Professional Baseball League, which ran from 1943 to 1954. It stars Geena Davis, Rosie O’Donnell, Lori Petty and Madonna and Tom Hanks, who gets to deliver the film’s most famous line: “There’s no crying in baseball.” For any woman who’s felt marginalized on or off the field, the film reminds us that where there’s a will, there’s a way. Sure, the men were off fighting World War II, and that didn’t hurt the league, but its staying power well beyond the end of the war is a testament to its purpose, inspiring women athletes everywhere.

In “Moneyball” (2011), a screen adaptation of Michael Lewis’ book about Oakland A’s manager Billy Beane (Brad Pitt) using sabermetrics to advance his team to the 2002 playoffs, we get another life lesson: Swinging for the fences is no strategy. Going for the grounder, bunting or getting a walk that puts you in scoring position is. Beane’s novel, small ball ideas, brought to life by director Bennett Miller, collide with A’s coach Art Howe (Phillip Seymour Hoffmann), a stubborn traditionalist. Watching the two men lay out their opposing world views, one forward-looking and the other stuck in the past, we can’t help but ask ourselves what baggage we’re holding on to that’s holding us back.