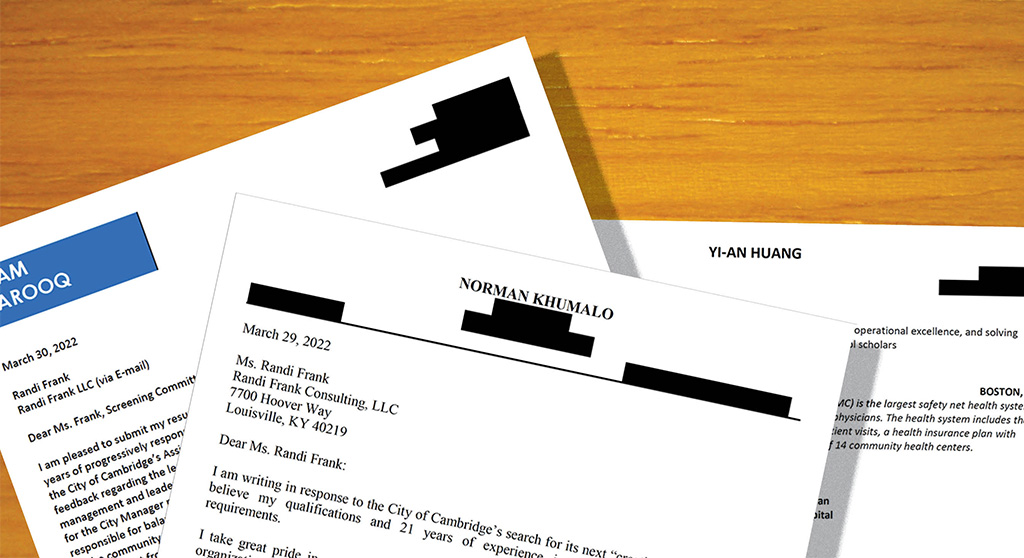 In the midst of the search for a new city manager, on May 19 the city publicly released the questionnaire responses filled out by the finalists before the open public forum.

Just one problem. Three of the four finalists included their personal contact info – cellphone numbers and personal email addresses – and the city tried to obscure the information by drawing black boxes on top. But Cambridge did it wrong, so anyone reading the responses could just drag the black boxes aside. Or highlight the text, copy and paste it. Oops.

Only Cheryl Watson Fisher, the manager candidate who is the city solicitor for Chelsea, was prudent enough to not put her contact information on a document destined for public release. Fisher did not respond to an inquiry for this story.

This reporter and one other person notified the city and its search consultant the night it was posted, and the city fixed it the next morning. The consultant, Randi Frank, stressed that she was not the one who did the redacting. The executive assistant to the City Council, Naomi Stephen, assured this reporter it wasn’t her either: “I know how to redact!”

All that was left was for the city to inform the candidates about its mistake so they could take corrective action, if necessary.

When asked in June to confirm the candidates were notified, personnel director Sheila Keady Rawson ignored the question. On June 29, faced with a public records request requiring her to disclose communications with the candidates, she confirmed that “the matter was addressed and the applicants were notified.”

As to when applicants were notified, Keady Rawson ignored the question June 29 and Tuesday. Again, faced with a public records request, Keady Rawson went from silent to responsive Thursday: “Sorry – thought I answered you the other day.” The notification was made June 29, she said.

That is: Candidates were alerted a month after the mistake, but only after repeated inquiry, and the city didn’t acknowledge its tardiness until faced with a legal obligation to do so.

“The improperly redacted resumes were online for just over 17 hours,” said Lee Gianetti, the city’s spokesman, on Friday. Gianetti’s written statement focused on providing detailed information on the timeline for posting and redacting the information, but not about notifying applicants. He stressed that the leaked information “could only be viewed if someone downloaded the documents and used a computer program to manipulate the redactions.”

Candidate for city manager Iram Farooq, who is assistant city manager for community development and thus a colleague of Keady Rawson, also declined to comment.

Norman Khumalo, the town manager from Hopkinton, also did not respond.

And Yi-An Huang, who was voted city manager on June 6? Huang (his first name is pronounced EE-on) noticed the bad redactions on the evening of May 19 and notified Frank, the search consultant. So the new city manager knows how to examine PDF files and confirm information is properly redacted.