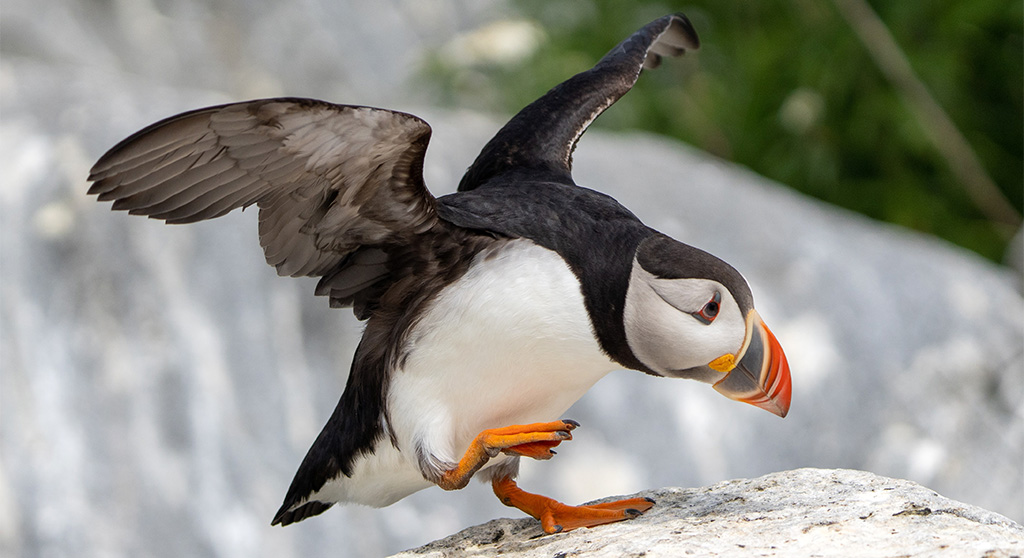 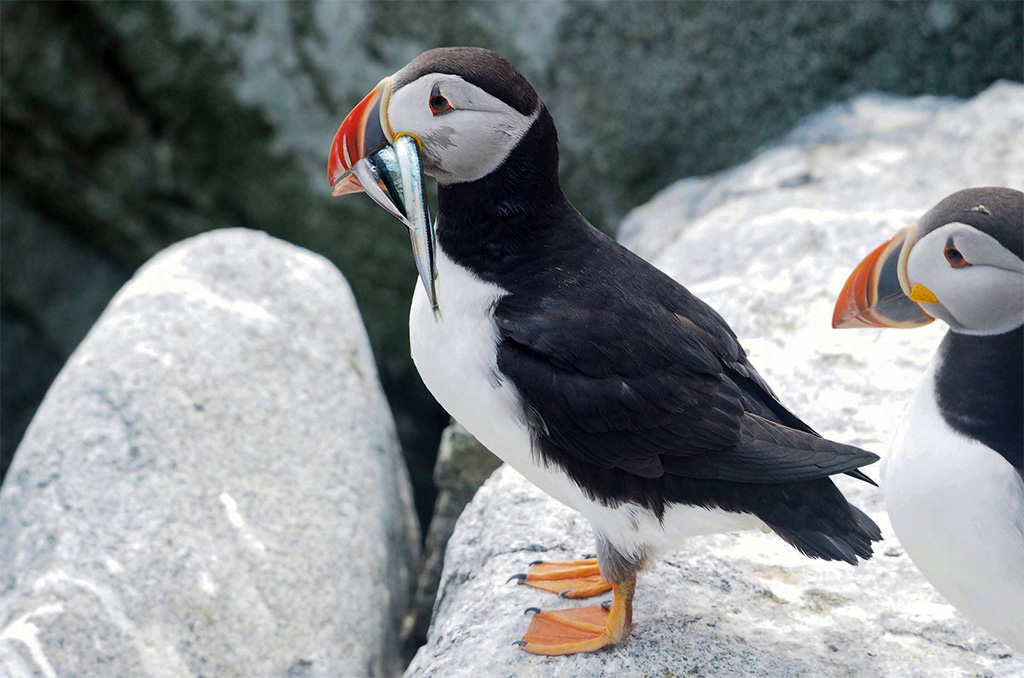 I went on a trip last week to northern Maine, so this feature is going to take a brief vacation from highlighting Cambridge critters to visit Machias Seal Island, a low-lying rocky landmass of about a mile that lies in disputed territory between the United States and Canada. It is here that about 8,000 pairs of puffins – the largest Atlantic puffin colony in the Gulf of Maine – breeds during the summer months. Each day, 15 viewers from the U.S. side and 15 from the Canadian side are briefly allowed into four blinds on the island (not at the same time). I was one of these viewers.

Atlantic puffins (Fratercula arctica) are small birds (about a foot long) and weigh about a pound. They eat small fish, such as herring and hake. Puffins spend most of their life at sea (and can drink salt water), but they come ashore to their breeding colonies in May, spending four or five months before returning to the sea. 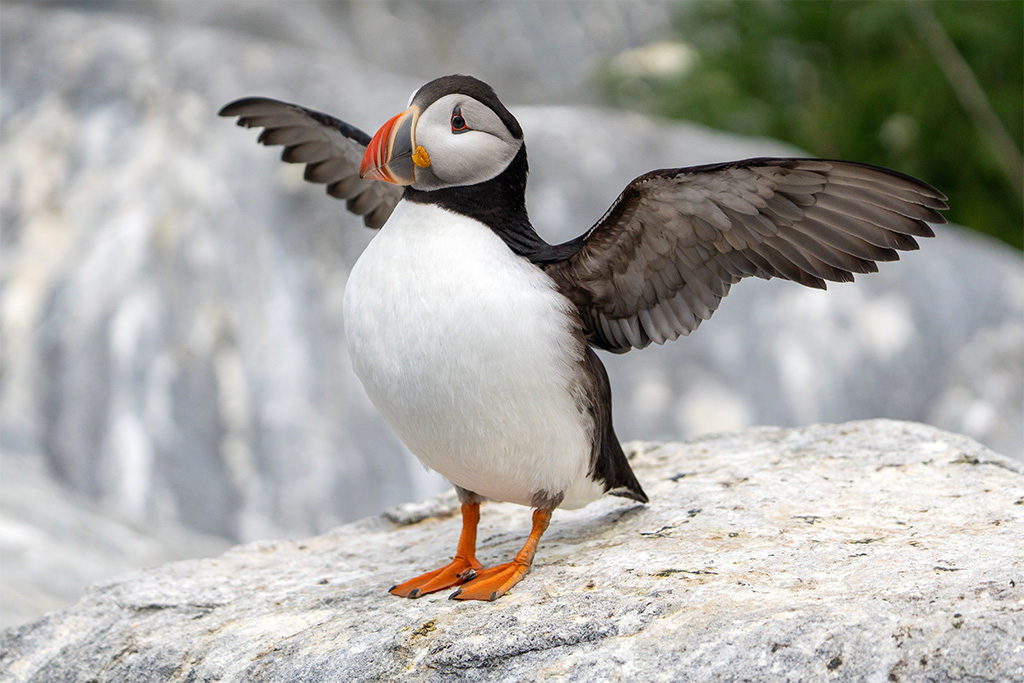 Puffins are most active in the evening, and as night falls some fly from their nests to roost at sea, often bobbing overnight above favorite fishing grounds that may be 25 miles out. In the morning, they dive as deep as 200 feet, opening their bill wide to collect all the fish they can. Using their wings to push and their feet to steer, they look as if they are flying underwater with their mouth agape. The birds fly back to their nesting grounds with the catch. When flying, puffins flap their wings like crazy, reaching up to 400 beats per minutes. They can fly around 50 miles per hour. 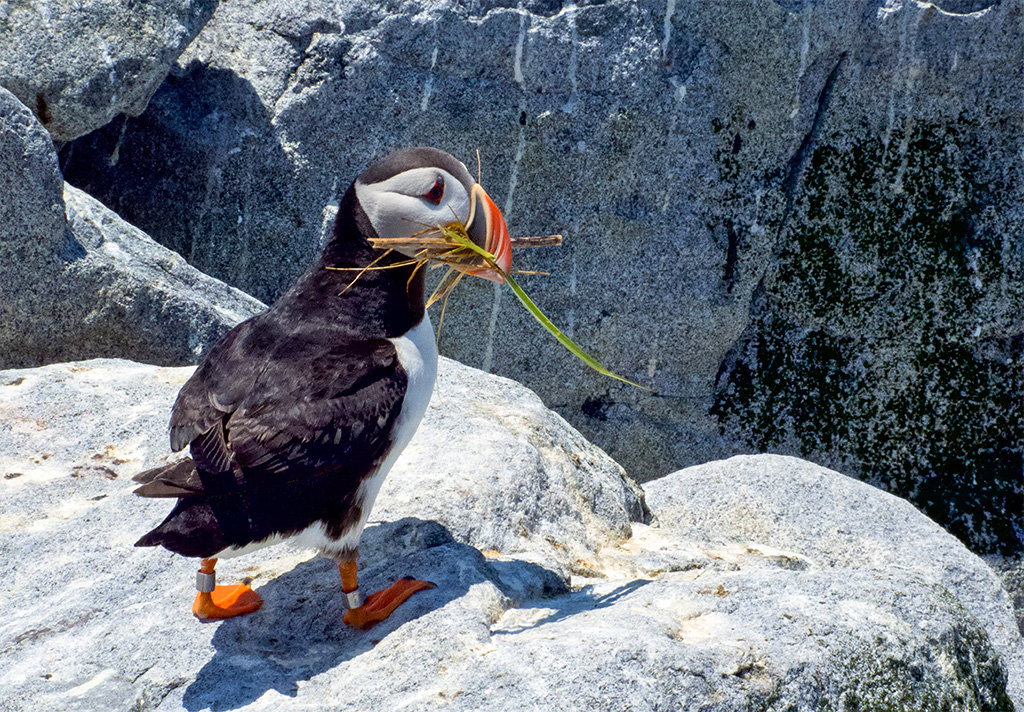 A puffin collects grasses for its nest. (Photo: V. Farley)

Puffins use their feet and bills to dig burrows at their nesting colony, where they keep the same mate and burrow from year to year. On Machias Seal Island, many puffins make their burrows beneath large rocks; others dig burrows in grassier areas. Most burrows are 2 to 3 feet long. At the end are soft, grassy nests where a female puffin lays one egg and the pair takes turns incubating it. After about 40 days, the egg hatches.

After a chick emerges, the parents catch fish to feed it. The parents generally carry more than one fish at a time back to the nest, the average being 10, but the puffins I observed carried only one or two or three, which may indicate that there is not enough food for the youngsters in this location this season. 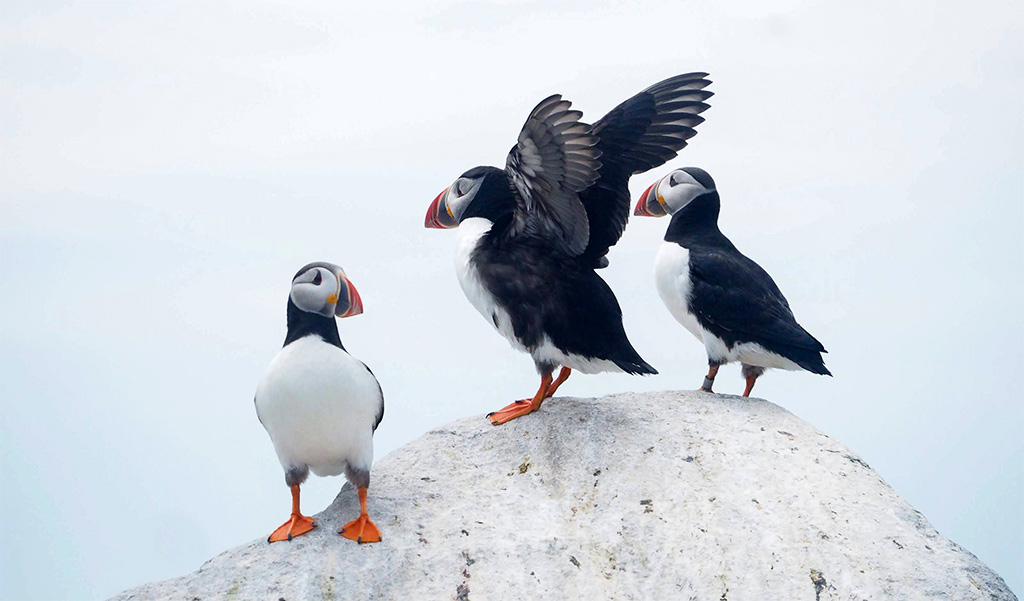 Three puffins congregate at the top of a rock on Machias Seal Island. (Photo: V. Farley)

After about six weeks, a puffin chick is fully independent of its parents; one night, the chick will slip out of its burrow, leaving its parents behind, and swim off into the wide ocean where it will live for several years. Eventually, it returns to breed in the colony in which it was born.

After its chick has fledged, the adult puffins too leave the breeding colony, usually in August. These puffins travel north to the Gulf of St. Lawrence in eastern Canada, where fish are plentiful. Later in the winter, they travel south, often to coral canyons and seamounts about 200 miles southeast of Cape Cod, a vibrant, deep-sea ecosystem with abundant fish. 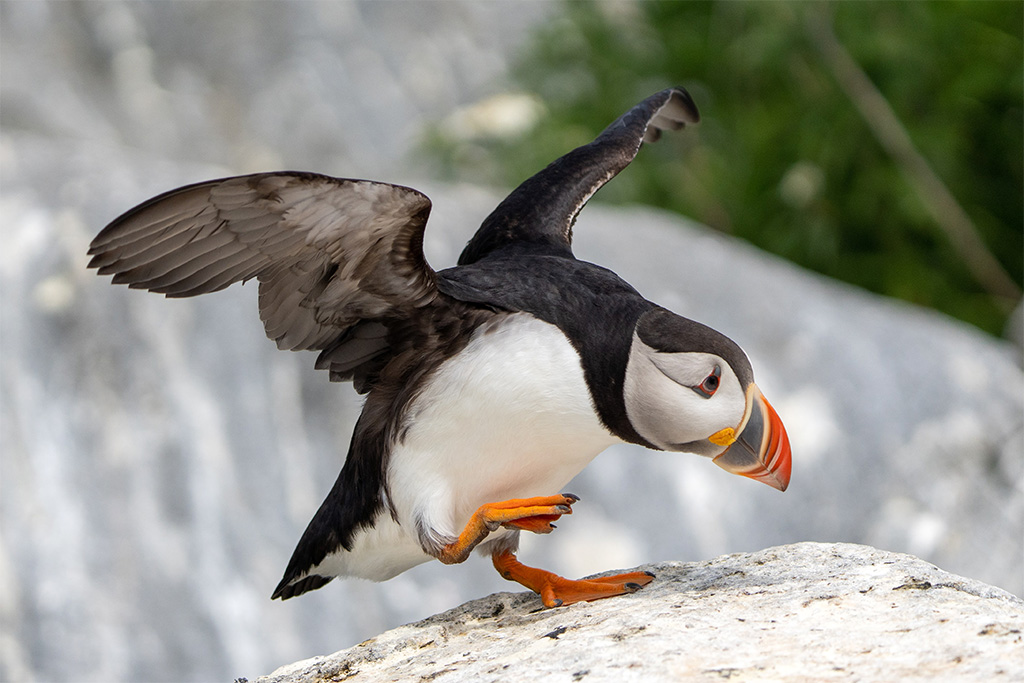 Puffins are graceful underwater swimmers, but they are awkward taking off and landing on land and water. (Photo: Jeanine Farley)

Puffins look so different in the winter that people once thought the winter bird was a different species from the summer bird. Winter puffins shed the colorful orange plates on their bill and around their eyes. Their feet and faces become dark. In late winter, puffins molt to replace their tattered wing and tail feathers. They are unable to fly for a month or more during this period. In the spring, their feet turn bright orange again, and their colorful bill and face plates regrow, preparing them for another breeding season. 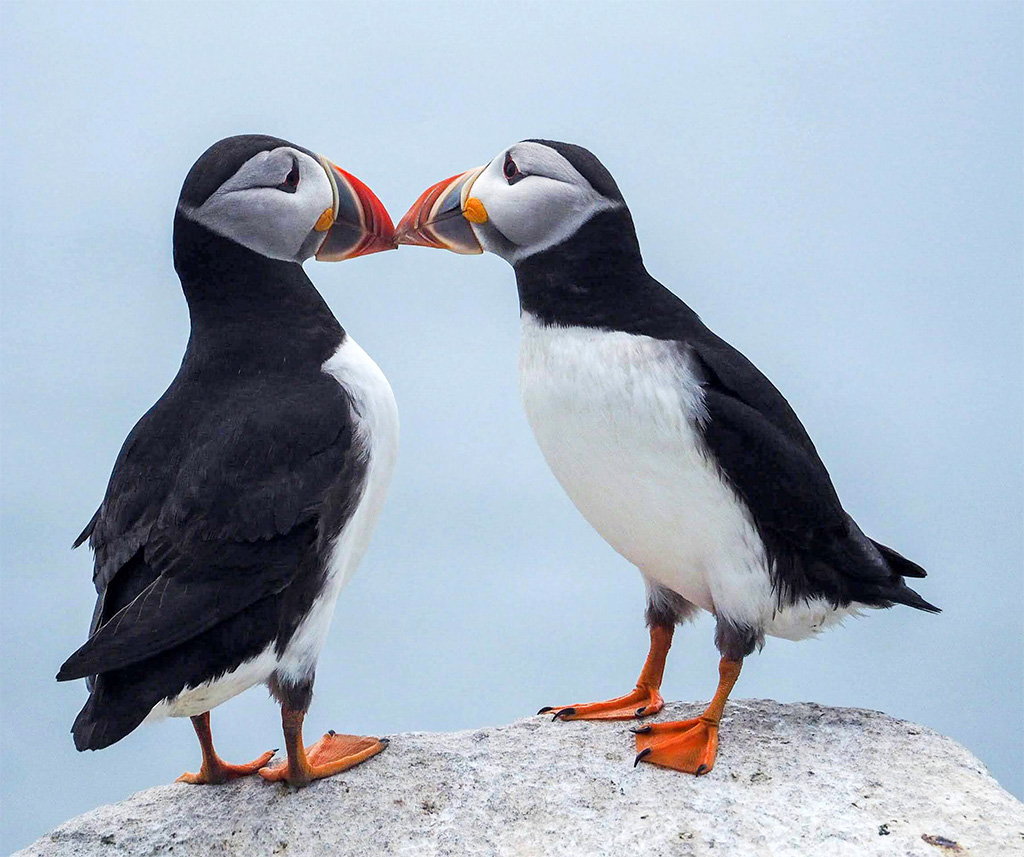 Breeding pairs of puffins rub their beaks together in a ritual called “billing.” (Photo: V. Farley)

What does the future hold for puffins on Machias Seal Island? They face quite a few threats. According to the National Oceanic and Atmospheric Administration, the waters within the Gulf of Maine are warming faster than 99 percent of the seas of the rest of the planet. Last year was the Gulf of Maine’s warmest year on record. Puffins eat fish that live in cold waters; if these fish retreat to deeper or more northern waters, which seems to be happening, puffins chicks can starve – and 90 percent of the puffin chicks on Machias Seal Island did in 2016, scientists report, because the hake and herring did not show up or were too deep for puffins to catch. 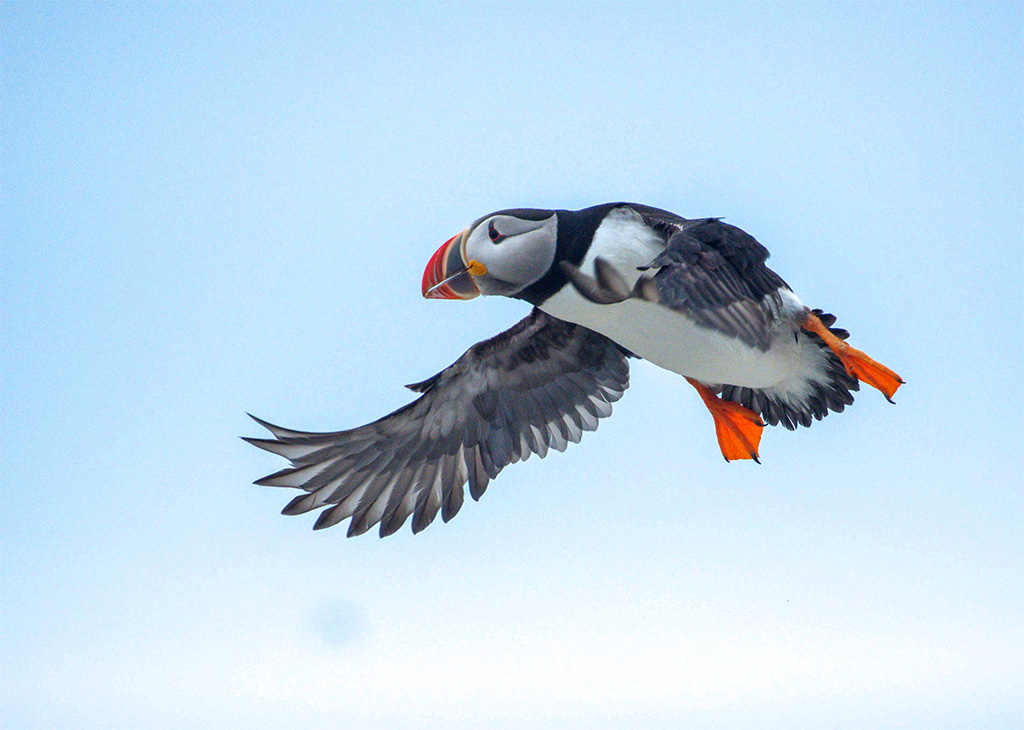 One puffin will incubate an egg while the mate flies away to feed; then the two will switch roles. (Photo: V. Farley)

It was estimated that only 2 percent of puffin chicks on the island survived last year.

Since puffins can live for 30 years or more, one bad season doesn’t doom the species, but a series can spell big trouble for the future of the population.

Herring was more than 90 percent of the prey that puffins on Machias Seal Island captured in 1995, but made up less than 30 percent in 2020. Overfishing and the use of nets that drag along the seabed, which can destroy fish habitat, threatens the herring. 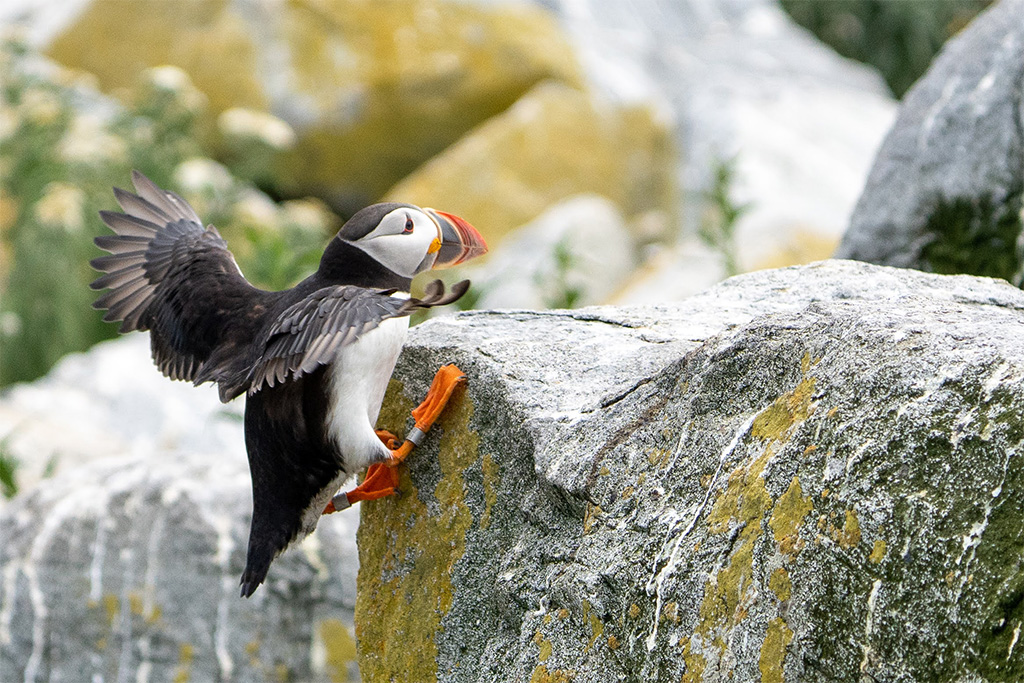 If threats to puffin food stocks were not enough, warming ocean waters may melt glaciers, raising sea levels enough to flood puffin breeding grounds. And if that was still not enough, the first case of avian flu – which has killed thousands of seabirds in the United Kingdom – was detected in Canada in December. The flu originated in poultry but spreads quickly and with devastating effects among birds, such as puffins, that live in dense nesting colonies.

Puffins in Maine and Machias Seal Island live at the southern end of their range and are hit hard by the effects of global warming. As such, they are harbingers of things to come. The plight of the Atlantic puffin demonstrates how human actions hurt wildlife on Earth; it may also be the only thing that can save the puffins and, by extension, the rest of the planet. 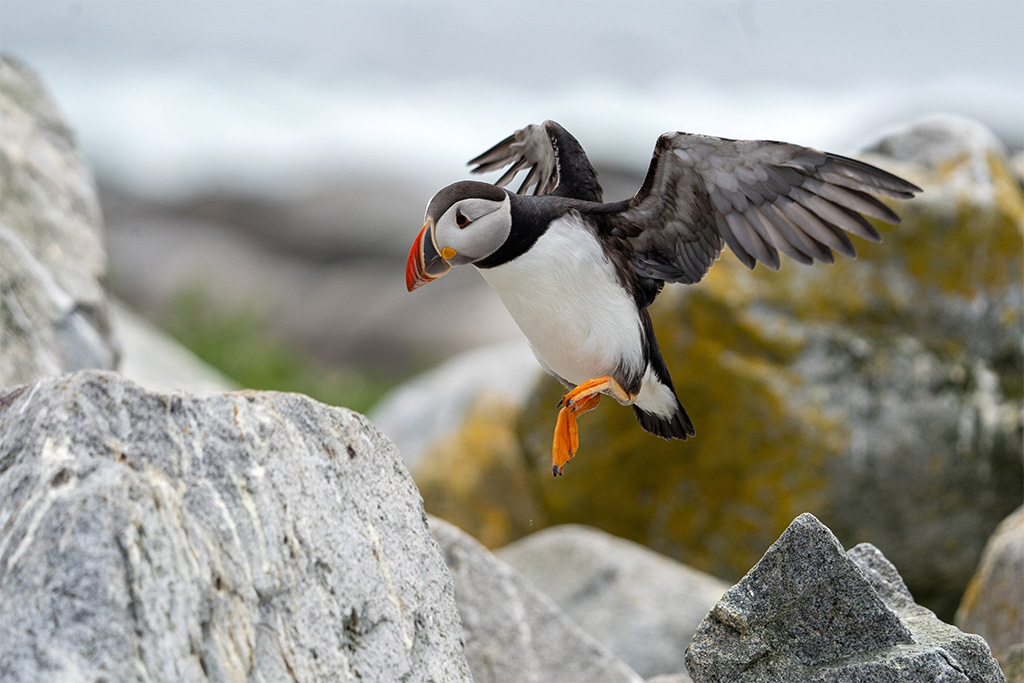 The puffin’s name Fratercula comes from the Latin for friar, a reference to black-and-white plumage that resembles a friar’s robes. (Photo: Jeanine Farley)

If you would like to observe the puffins of Machias Seal Island while they are abundant, there are several options. Bold Coast Charters operates out of Cutler, Maine, and Sea Watch Tours out of Grand Manan, New Brunswick, Canada. I went as part of a photo adventure through Hunt’s Photo & Video.

For more about the puffins of Machias Seal Island, view this story from the Canadian Parks and Wilderness Society. 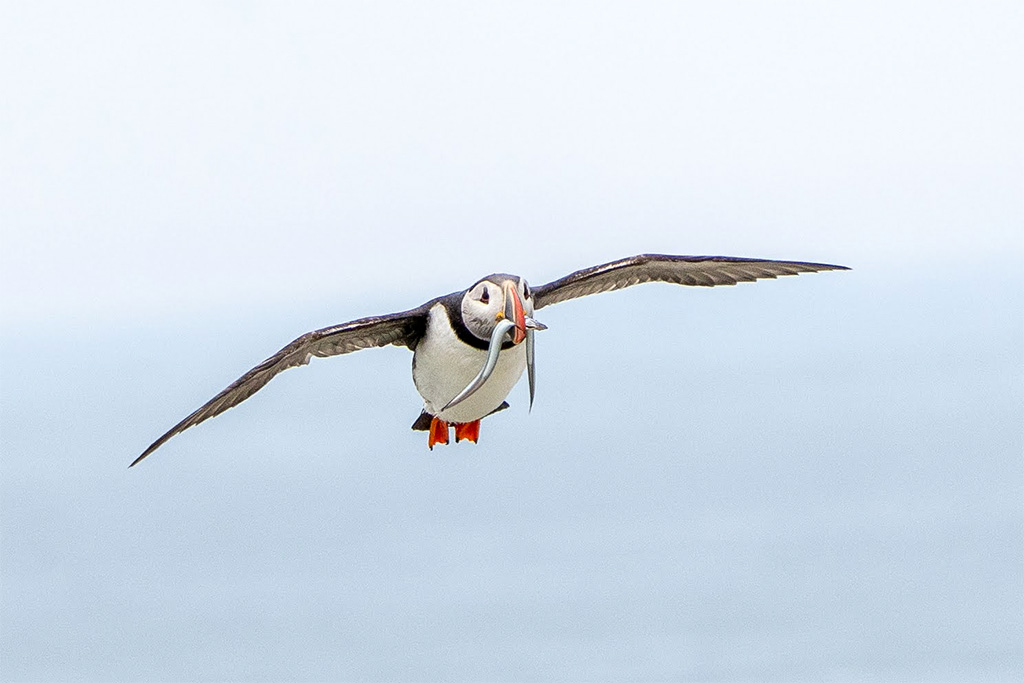 A puffin flies back to its nest with two fish to feed its offspring. (Photo: Jeanine Farley)

Bullfrogs can and will eat almost anything, getting big enough that we then eat them