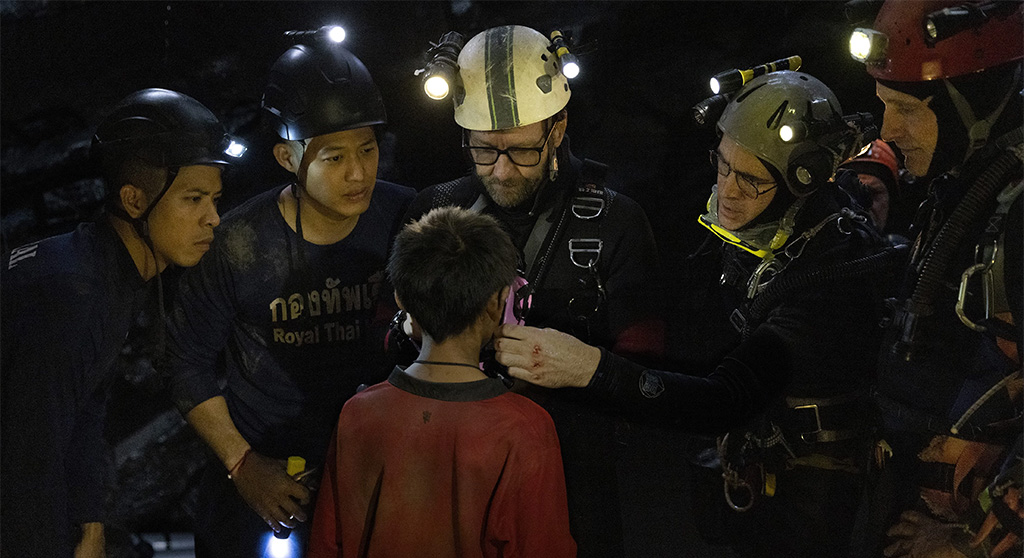 A welcome respite from the seemingly endless stream of doom and gloom unfolding in the newsfeeds, Ron Howard’s “Thirteen Lives” is an inspiring tale of triumph over tragedy. It’s based on events in northern Thailand in July 2018, when 12 boys and their coach walked into the Tham Luang Nang Non cave for a little R&R after a soccer tourney. They planned to be home in time for dinner; an unexpected, torrential monsoon flooded the Tham, stranding them on a small rise two and a half miles from the mouth of the cave. In its opening 10 minutes, “Thirteen Lives” does an expert job setting all this up, then swiftly pivots to the film’s central problem: how to pull off a massive, unbelievably complex and ever-changing rescue operation. The film’s re-creation of what happened at the Tham includes several visually stunning scenes and sets. To name three: the orchestration of the flash flood, the collapsing cave and a sprawling base camp tent city at the mouth of the Tham. The only way to reach the stranded boys was to suit up in high-tech scuba gear and swim through a gantlet of claustrophobic passageways spiked with stalagmites and stalactites. The production’s re-creation on an Australian soundstage of the long, narrow cave passageway may rank as the film’s most astonishing accomplishment.

Among an international coalition of willing experts (divers, spelunkers and military specialists) who converged at the Tham’s entrance, a quintet of seasoned British cave divers specializing in rescue operations is led by two men, John Volanthen (Colin Farrell) and Richard Stanton (Viggo Mortensen) spearheaded the extraction mission. The hard part, however, wasn’t in reaching the kids. it was getting them out. Beyond the physical complexity of the cave, the fear quotient and potential for panic registered high for the untrained teens.

Meticulous in its retelling, “Thirteen Lives” chronicles the journey of the boys after they entered the Tham. To detail each phase of the rescue, which took a whopping 18 days to complete, the film uses on-screen dates and animated maps showing the divers’ locales to provide us with up-to-the minute info on the status of the operation. It’s a device that might have dampened the film’s emotional punch, but the action-packed underwater footage keeps us glued to the screen. There’s also times when “Thirteen Lives” feels like a first-person video game, but it doesn’t detract; it just immerses you more in the ever-present peril and high emotional stakes. And the film doesn’t gloss over the plight of the boys’ families, at the end of their emotional ropes and awaiting news about their children. Volanthen and Stanton don’t talk much (they’re too busy swimming). They’re hard-core realists who know that bringing the kids out alive is a long shot. Mortensen delivers the film’s mainstay movie line, “It’s a crazy idea, but just maybe …” It’s a testament to Howard’s fine directing that he lets his stars communicate mostly through their reactions to the situation, letting his camera linger long enough to capture their feelings or thoughts. Since directing “Apollo 13” (1995), Howard has insisted that his based-on-actual-events films stick to the facts, stating that “part of the entertainment value of a film like this is authenticity. Audiences can smell it. Today you can jump online and double-check things. So part of your promise with the audience is that, yeah, we’re going to make [this story] very exciting and watchable, but the foundations of the story, the specifics, are going to ring true.”

“Thirteen Lives” is about individuals coming together as a team, exhibiting resilience and perseverance in the face of adversity. It’s also about strong, adult, silent-type men who get up in the morning and go to work. In this case it’s saving lives, and damn the media spotlight. When the good news comes we can’t help but tear up, just a little, for in true Hollywood fashion, not only have our heroes once again snatched victory from the jaws of defeat, but it feels like Ron Howard, aka little Opie from “The Andy Griffith Show,” has found his groove.