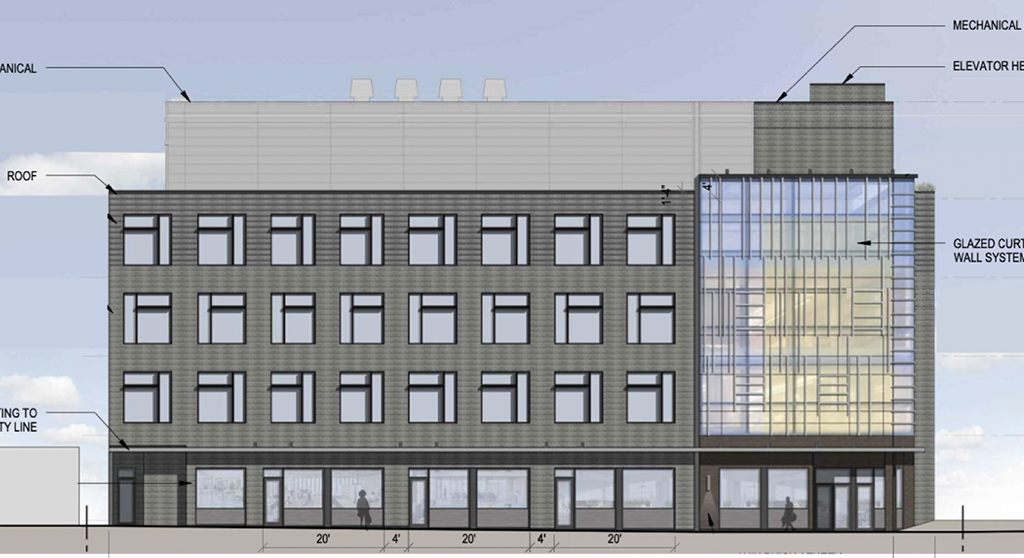 A rendering of a lab building that could be built in Porter Square at 32-44 White St., Somerville.

Two homes and a former printing company in Porter Square are due to be replaced by a four-story laboratory office building, topped by a fifth floor of mechanicals.

The project, at 32-44 White St., Somerville, would be across the street from the Porter Square Shopping Center, with its Star Market, CVS and other services. An online information meeting with SGL Development is planned for 6:30 p.m. Wednesday, said Ward 5 city councilor Beatriz Gómez Mouakad, herself an architect and construction project manager who once worked in Cambridge. Information about the meeting, including a Zoom link, is here.

The building would replace Fleming Printing at 40 White St., a squat, cinder block building holding a business identified as permanently closed, and the single-family homes on either side of it: 32 White St., built in 1844 and last sold in 2007 for $450,000; and 44 White St., a rustically wood-walled home built in 1900. (The last exchange of the property recorded by Somerville assessors was for $1 in 2006.)

The Fleming building and home at 32 White St. have a common owner, Gary Shea, according to Somerville records, though each name other owners or trustees.

Though the project would take away two residences, the city of Somerville needs to strengthen its commercial base to build more housing, Mouakad said Wednesday – and in the run-up to the developer meeting, she has heard little to no neighbor and Somerville community opposition to the proposed project.

“I have to create revenue to build the housing, particularly affordable housing,” Mouakad said. “Cambridge has three nonprofit developers, and they’re producing at a much higher scale than we are – Just A Start alone has 16 projects right now. Cities need revenue to support their infrastructure and to subsidize affordable housing, and there’s no other way around it. Boston is like 50 percent commercial and has 20 percent deed-restricted properties. Cambridge is at 15 percent. We’re at 10 percent and our goal should be, at a minimum, 20 percent. How do I get to that goal?”

SGL is led by Adam Siegel, of Cambridge, where its website says the company has developed $50 million worth of real estate over the past five years. The site suggests the company, based on Memorial Drive in Cambridgeport, has been focused on residential developments.

“Labs will take over the city”

Cambridge councillor Dennis Carlone has been working since March 2021 on zoning to limit labs and some technical offices from being built in low-density retail districts, but to little effect. A second lab building is planned by the commercial real estate firm Bulfinch for near Porter Square at 1740 Massachusetts Ave. that would see the razing of a Walgreens, Keezer’s secondhand clothing shop and Simon’s Coffee Shop, he said in a March 17 committee hearing and Aug. 1 meeting of the council.

“Labs will take over the city,” Carlone said Aug. 1. “We have more labs per capita now than any other city in the country. I calculate that we have 20 times the amount of lab square footage per capita as compared with Boston … we have to begin putting labs where they belong, and not where we don’t want them.”

Bulfinch’s purchase of the Cambridge building was made in 2018, records show. (Here too, the price is given as $1.) Though it has construction dating back to 1894, assessors say it is in overall superior condition.

Labs are now allowed as of right, but Carlone said he would prefer to see housing go up.

“We all want housing,” Carlone said, but his zoning proposal had little support under former city manager Louis A. DePasquale. Carlone said he hoped to try again in the fall for a policy that promotes affordable housing ahead of new lab space in mostly residential areas such as around Porter Square.