‘Till’: Mother’s first step seeking justice for son ensures that world sees the violence against him 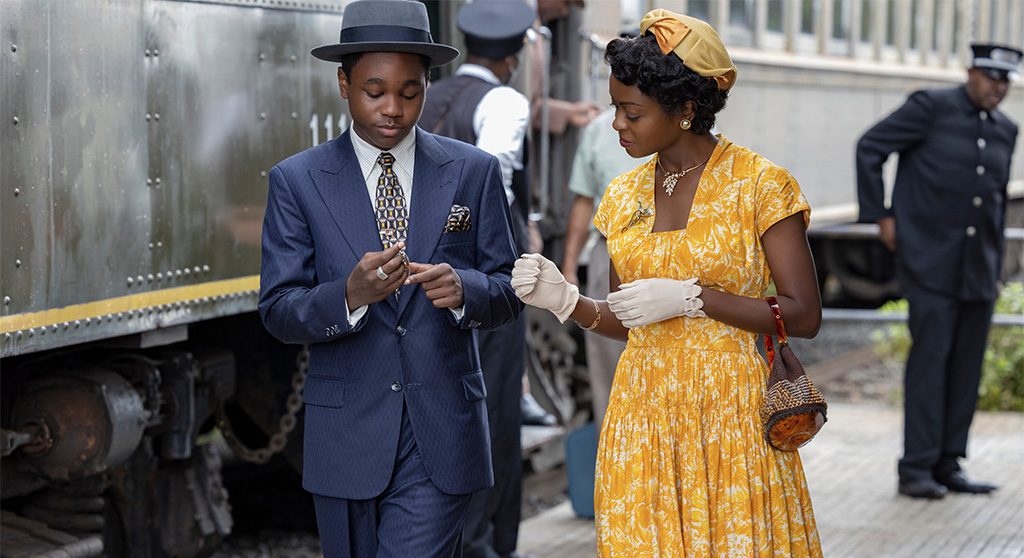 ‘Till’: Mother’s first step seeking justice for son ensures that world sees the violence against him

Everyone should know the story of Emmett Till, who became a civil rights flashpoint when he was lynched in Mississippi while on school break during the summer of 1955. If you don’t, you now have a personal mandate to see “Till.”

In her telling of the Till saga, writer-director Chinonye Chukwu (“Clemency”) makes some wise narrative choices. First, the film does not crescendo with Emmitt’s unconscionable murder. That hate crime – the very definition of one – happens in its first third, with the brutality remaining off-screen yet still visceral and grim. Secondly, Chukwu gives us both viewpoints as to what happened in a general store when black northerner Emmett (Jayln Hall, giving a wide-eyed, affable turn) bought candy and interacted with Carolyn Bryant (Haley Bennett), the white proprietor of the establishment. We get Emmett’s boyish interaction with Bryant, telling her that she looks like the movie star he carries a photo of in his wallet (in real life, it was a girl in his school class in Chicago). Later, at trial, Bryant claims she was sexually assaulted by the 14-year-old boy, a story now widely held as fabrication and one that appears pretty unbelievable during sham court proceedings.

What Chukwu homes in on is the journey of Emmett’s mother, Mamie Till-Mobley (Danielle Deadwyler, “Station Eleven” and “The Harder They Fall”), and her quest to exact justice in the Jim Crow South at a time no black person could reasonably hope to find justice. Mamie’s character arc is radical, rewarding and well done, thanks to Deadwyler’s effusive commitment and heartfelt conveyance. When we meet Mamie she’s apprehensive about Emmett’s sojourn south by himself to visit cousins. The warnings from Mamie, Emmett’s uncle (John Douglas Thompson) and cousins – to not engage with or raise an eye to a white person and, if you do, to submit and back off – are profuse. Later that evening after the encounter, Bryant’s husband Roy (Sean Michael Webber) and friend J.W. Milam (Eric Whitten) and a small posse show up and abduct Emmett from his uncle’s house.

Crushed by the news of Emmett’s death, Mamie demands the body. After encouragement from the NAACP to fight the crime, she holds an open-casket funeral to show the world what was done to her son; the rendering of the bloated, mutilated body is not easy to take, which was the point then and now. If you had yet to be sparked by outrage, here’s your match.

With the resources of the NAACP, Mamie is able to press charges and get Roy and J.W. in court. But as history shows, they were acquitted (by an all-white jury). Shortly afterward, they confessed to the murder in a story in Look magazine for which they received $4,000. Carolyn Bryant also allegedly confessed in an interview with Duke University scholar Timothy Tyson that “Nothing that boy did could ever justify what happened to him,” though those conclusive words were not recorded.

To its credit, the film does not end on such a defeatist note, but moves on from the trial with Mamie’s continuing to fight in the civil rights movement. The transformation from fraught, worrying mother to empowered activist is earned and complete. At the core is Mamie’s deep emotional resolve despite her initial apprehension to step onto a national stage, but once there, there is no wavering. Next to Cate Blanchett’s remarkable incarnation of an egomaniacal conductor in “Tár,” Deadwyler delivers the most essential and critical performance in a film this year. The film’s also crafted with caring nuance, as much about a mother’s personal journey as about social shifting events. There’s nothing didactic or shaming and there’s no need; the shame is right there in history, an inglorious, senseless bloody stain – the film is just a reminder of it. Feeling too late but not too little, the The Emmett Till Antilynching Act was signed into law this year, amending the Matthew Shepard and James Byrd Jr. Hate Crimes Prevention Act.