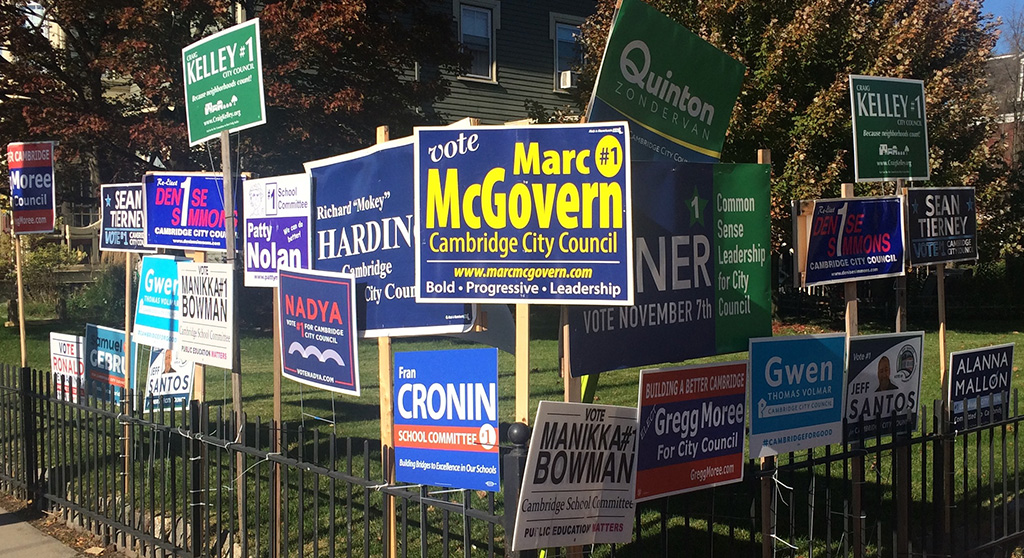 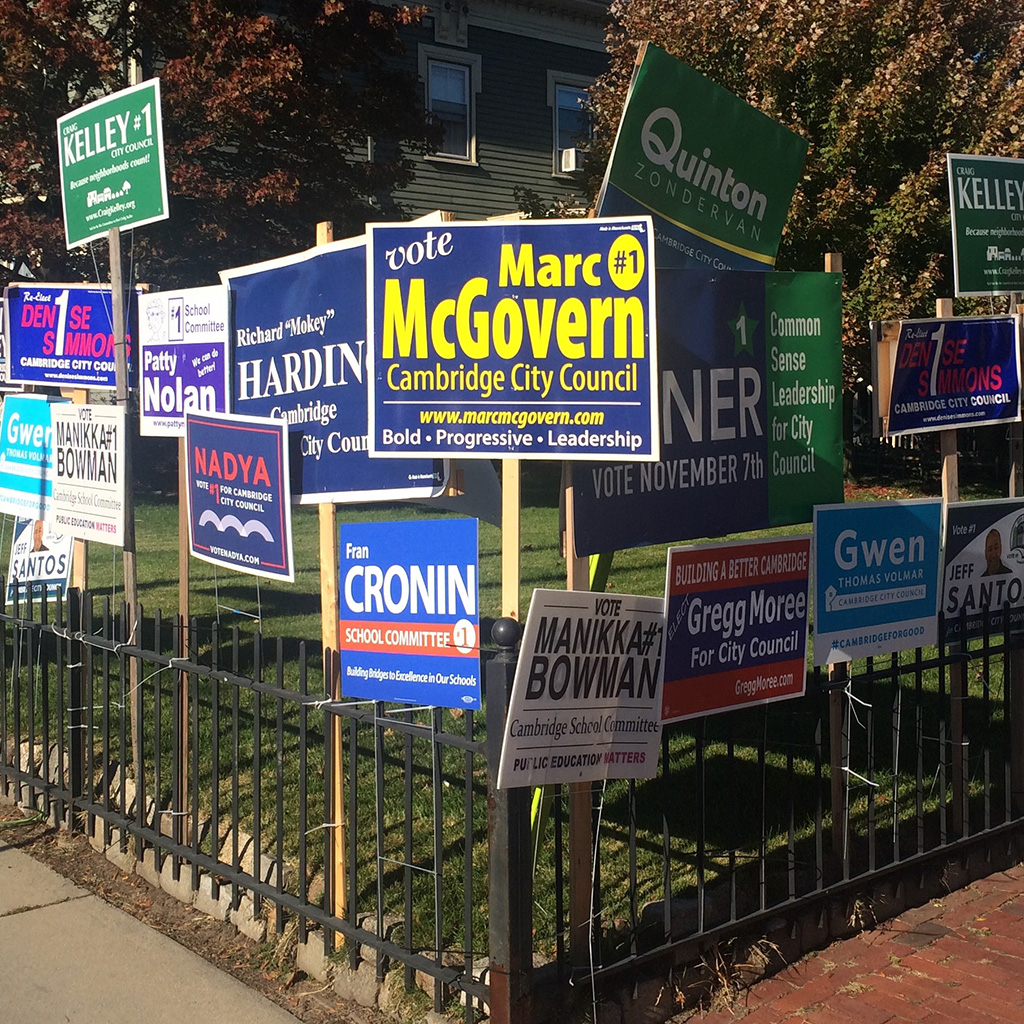 A display of campaign signs from 2017 at Chester Street in Cambridge. (Photo: Marc Levy)

The next version of Cambridge’s charter may well call for four-year City Council terms rather than two, staggered elections, a new way of choosing mayors, term limits and even a ward system in which councillors run and represent distinct parts of the city – all ideas discussed Oct. 25 in the third meeting of a Charter Review Committee.

Underlying much of the so-far very theoretical conversation was concern about the relationship between the city manager and council, with debates that will sound familiar to anyone following local politics over past years, as well as about how the city manager form of government reflects the values of Cantabrigians.

Any eventual changes would be among the first major updates in 80 years to the city charter and its “Plan E” form of government, which establishes that there will be a city manager appointed by a relatively weak city council, which picks a mayor from among its own ranks to chair meetings and represent the city ceremonially.

The exploring of options was approved by voters in the November elections. To a ballot question testing interest in having a charter review process every 10 years, starting with this year, 15,251 were in favor and 5,305 were opposed – or 74 percent to 26 percent.

After getting the 15-member group organized, chair Kathleen Born and advisers from the Collins Center for Public Management at the University of Massachusetts at Boston used the meeting last month to gauge the topics of most interest – “what this charter process should be about,” in the words of the Collins Center’s Elizabeth Corbo. “The things that you think are working well in Cambridge, and the things that maybe are not working so well.”

The first members to speak, Mosammat Faria Afreen and Kai Long, captured much of the next hour’s biggest points. While Afreen focused on the “power imbalance” between the city manager and council in setting the city’s budget, Long expanded that to resetting decision-making in Cambridge more broadly. “Everything we do can’t just be around how much money you have,” Long said, pointing to both the means needed to become a councillor and “being on committees like this – if it has to be volunteer time, only people with money can have the time to volunteer.”

The city manager power imbalance was the more diffuse of the conversations, but members homed in quickly on the expense of running a citywide campaign vs. one that was limited to a neighborhood, and how going on to represent one neighborhood and host the meetings affecting it created a clearer connection to government.

While decades of strong financial management allows Cambridge to undertake programs and projects that would be impossible in most communities, “there is definitely a challenge with how decisions are made and how residents understand them,” member Patrick Magee said. “Geographically elected councilpeople will help that. Somerville has a nice tendency where meetings are held by both the local councilperson as well as city staff, and it allows the residents to understand what’s going on and how those decisions are being made.”

Future meetings should say more about how a strong-mayor form could differ and how to give the council more consistency and effectiveness than with the current two-year terms, Magee said, especially considering that “eight years ago, it took the better part of three months for us to elect the mayor.”

One possibility: electing the entire council every four years instead of two, or staggering terms so half the council is elected every four years, or a third of them every three years. There were easy solutions for choosing a mayor as well. “There’s about six systems that can allow for mayoral election to be decided the day after the council is chosen,” member Jim Stockard said. “It could be the councillor with the most No. 1 votes. It could be the councillor who’s been [there] the longest. It could be a rotation by alphabet. There are all kinds of ways.”

It was worth considering changes if it ended in “reducing the costs of running every two years,” member Kevin Chen said.

Born, a city councillor between 1992 and 2001, said she was glad that the expense of running for office came up. “It’s, frankly, why I just stopped,” Born said. “After eight years, I never wanted to be in the position of having to pick up the phone and raise funds. I saw other people doing that – I saw state reps and state senators having whole afternoons of just sitting on the phone asking for money. And in ideal democracy, this shouldn’t be the focus.”

Cambridge’s proportional representation form of election deserved some blame – Born quoted former state Rep. Alice Wolf as calling it “a wonderful form of election, but a really lousy form of government” – by making collaboration among councillors difficult and forcing biennial elections, she said. But it also meant that councillors represented the entire city, while ward-based elections held a danger: “I’m just terribly afraid that it would favor the wealthier areas in the city.”

Similarly, she appreciated the stability of having a city manager, fearing that a strong mayor form of government would lead to “the ups and downs you see in cities that are very personality driven,” while agreeing that Cambridge had seen a “lack of clarity” in the council-city manager relationship. “There are people who think that the city manager runs the city, when in fact, the way it’s supposed to work is that the City Council makes the policy and hires a chief executive to implement the policy,” Born said.