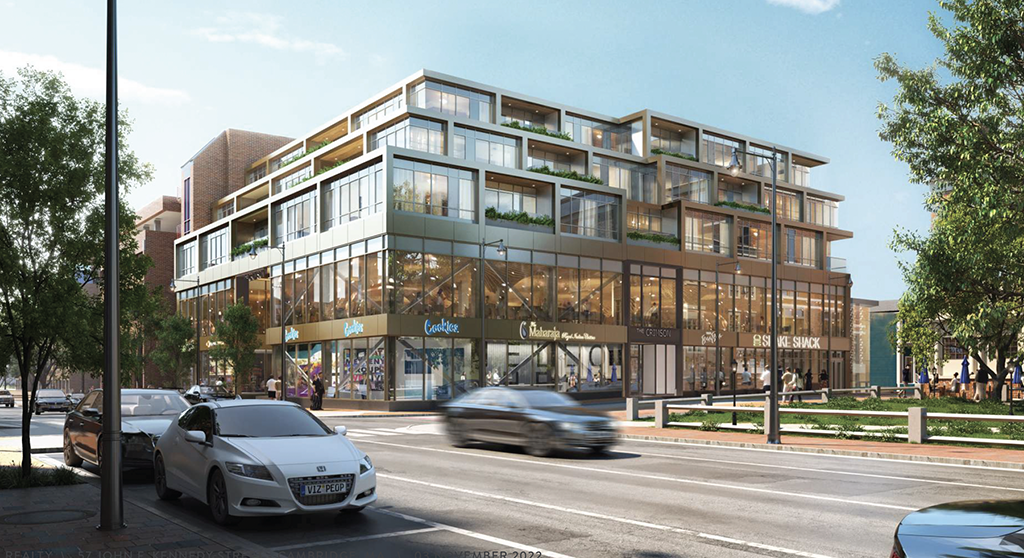 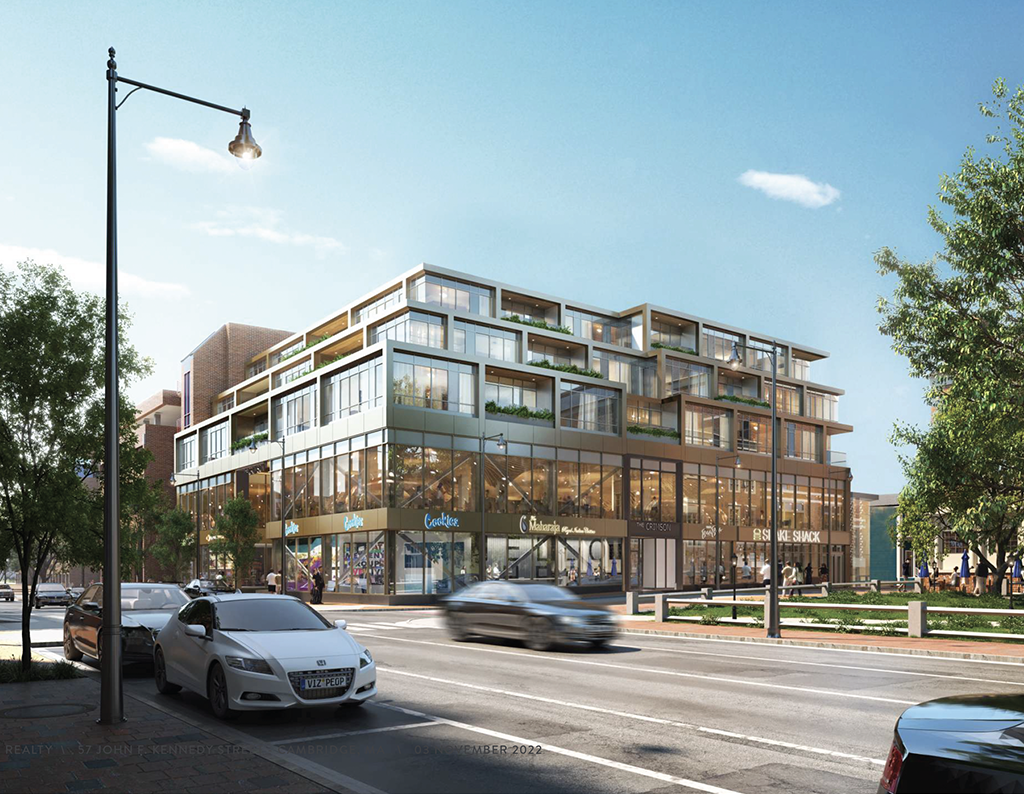 A rendering of the Crimson Galeria in Harvard Square with three new top stories of apartments. (Image: Nelson via Cambridge Historical Commission)

A three-story addition of 38 apartments to the Crimson Galeria next to Harvard Square’s historic Winthrop Park was approved Thursday by the Cambridge Historical Commission.

A certificate of appropriateness was issued in September 2021 for the project at the retail complex at 57 John F. Kennedy St. built in the 1970s, but the commission required representatives for the project to return with design changes for final approval.

Since the last meeting with the commission, many changes asked by the Planning Board, Cambridge Development Department and other city urban design representatives have been made to the plans.

Some of the most significant include modifications to floor plans that reduce the number of units to 38 from 40 and add two two-bedroom units, a request by the Cambridge Housing Authority. Long- and short-term bicycle parking was added. The height of the building increased to 65 feet from 60 feet to accommodate less carbon-intensive wood framing for the upper floors. All balconies will now be functional rather than decorative. A green roof will be installed, and other roofing will be white to help meet third-party sustainability certification requirements. The residential entrance on the northwest side of the building will be pushed back to ensure an adjacent historic house is not overshadowed.

The building’s façade, which is concrete, will be outfitted with aluminum panels.

“This building is a daily landmark in my commutes to and from class, and frankly, as it stands right now, I find it to be an eyesore, so I’d like to say that the designs look great,” said Hannah Valencia, a Harvard University student who attended the meeting as part of a class about Harvard Square.

An iteration of the project was opposed in 2014 due to its potential to cast shadows on Winthrop Park, which is across the stone lane of Winthrop Street; Katharine “Kitty” Dukakis, the former first lady of Massachusetts, was part of a coalition opposing the project, according to The Harvard Crimson. That plan was rejected. The project’s current plans include shadow studies that show the project will not substantially overshadow the park. This iteration of the project originally included four stories but was reduced to three last year.

“I would also ask that the owners and contractors and designers look toward the goodwill of the public in ultimately protecting the park, which is one of the few areas of green space in this area,” said commissioner Jo Solet during Thursday’s meeting.

The developer still must go through the rest of the city’s development process, which includes consultation and review with city departments as well as the acquisition of a building permit before the project can start construction.