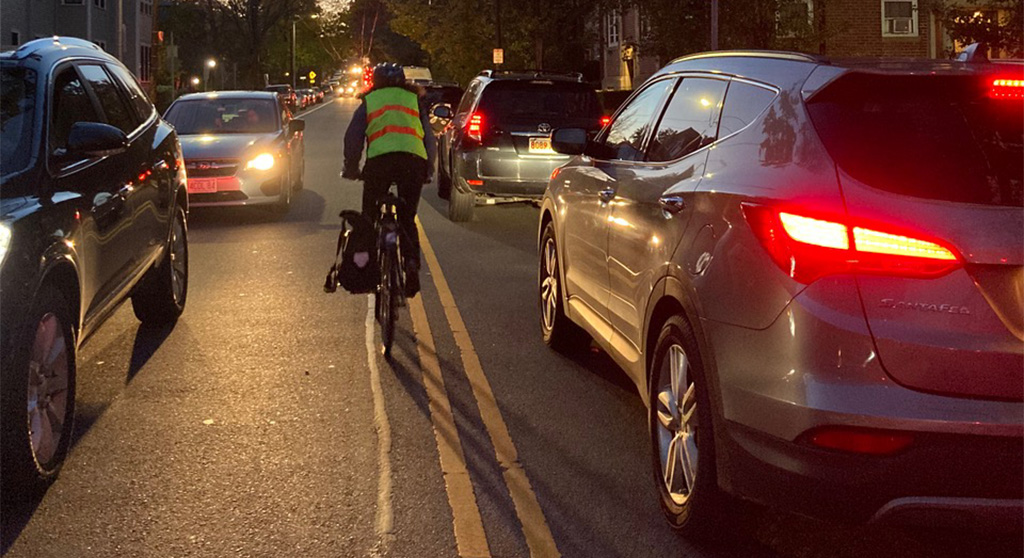 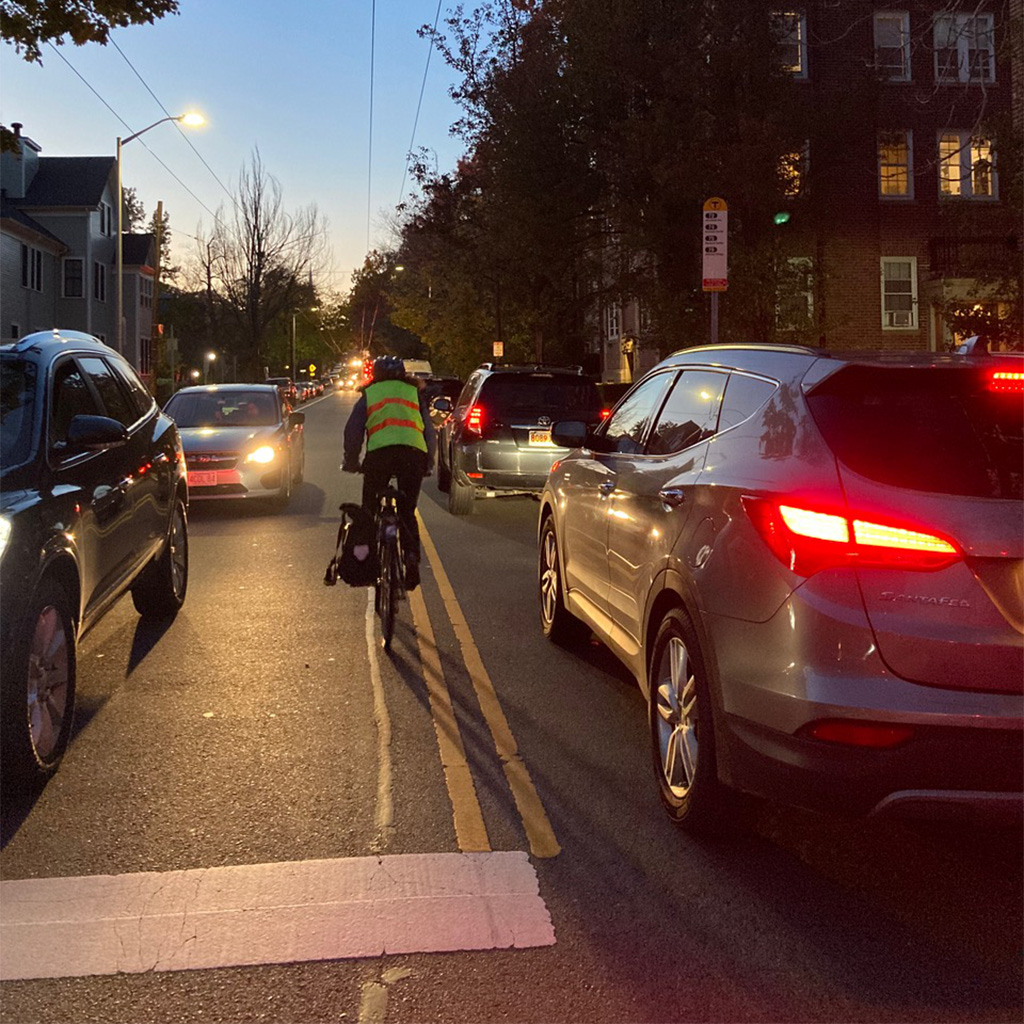 Looking up Concord Avenue from Craigie Street on Nov. 2, after changes to traffic on Garden Street. (Photo: Annette LaMond)

Drivers and some residents around Garden Street may not be happy about traffic changes since the installation of bike lanes – making much of the road one-way and moving vehicles to suddenly jammed side streets – but the nature of the argument has changed, Cambridge city councillors said Monday.

Though there have been calls to stop and even undo bike-lane installations citywide, councillor Paul Toner’s policy order about Garden Street was not that. “It was indicated in some communications that this was some sort of hidden attempt to undo bicycle lanes. And I want to make it clear, this policy order was nothing more than to acknowledge that there are concerns,” Toner said.

Councillor Marc McGovern believed neighbors had responded in kind. “I didn’t hear a lot of people talking about how we have to roll this back and not keep the bike lanes,” McGovern said. “There was a lot of talk of ’How do we mitigate any of the negative impacts?’”

The order calls for staff to discuss ways to mitigate and reduce overflow and cut-through traffic and report no later than March 27, a date that Toner said was based on staff advice about what was feasible. An amendment by councillor Quinton Zondervan proposed moving much faster, getting a report back at the council’s Nov. 21 meeting.

Neither date wound up being voted after councillor E. Denise Simmons used her “charter right” Monday in the hopes that Zondervan and Toner would get together and agree on a date. 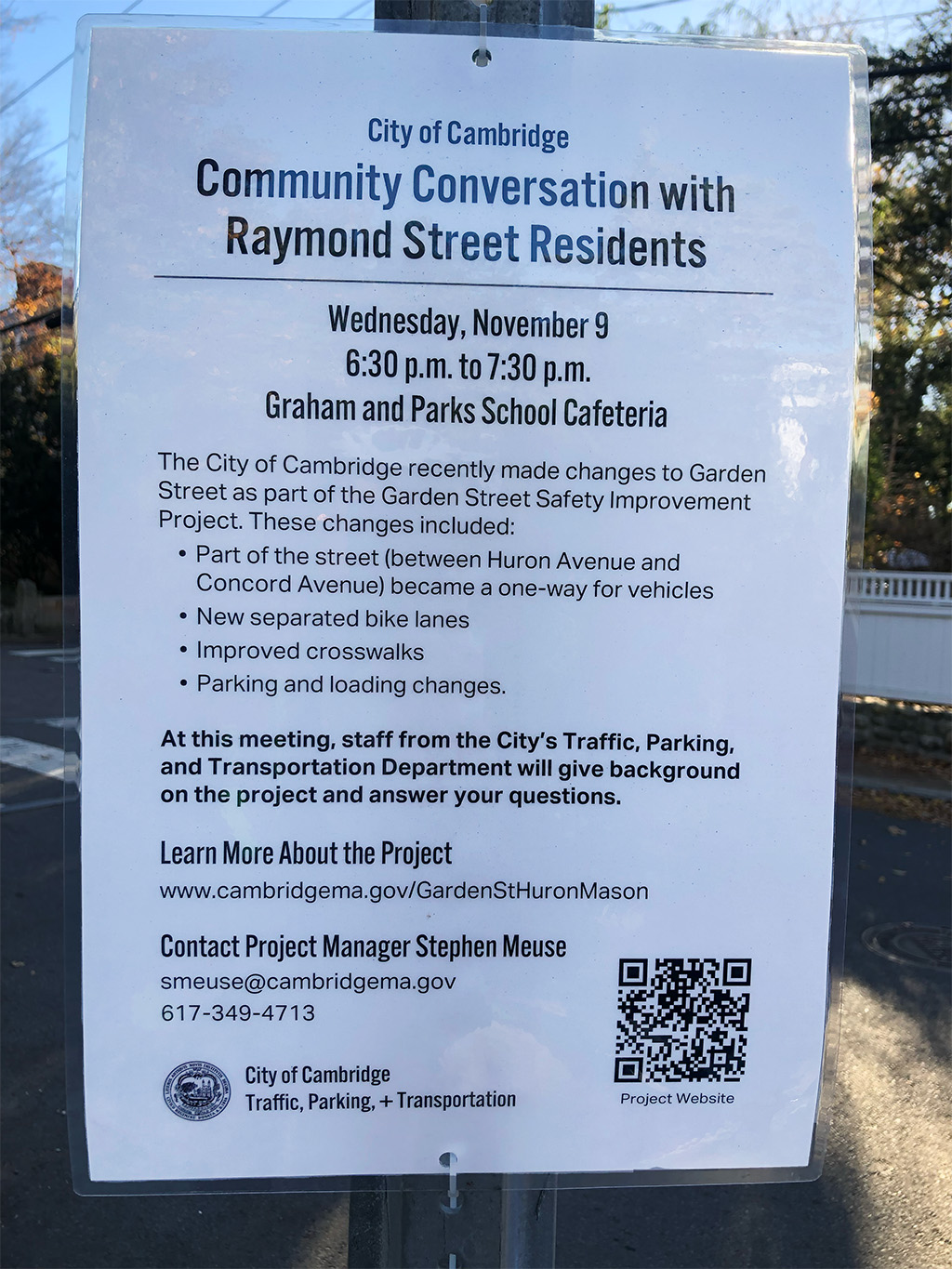 A meeting planned for Wednesday is presented as being organized by city staff, yet city staff say it is an unofficial meeting called by residents. (Contributed photo)

In the meantime, a meeting with transportation staff that was asked by Raymond Street residents is scheduled for 6:30 to 7:30 p.m. Wednesday at the Graham & Parks School, 44 Linnaean St., Neighborhood 9. Councillors wanted it opened to include any resident from the area. “We cannot have five different meetings and have a separate meeting every time there’s a street change,” councillor Patty Nolan said.

Though traffic officials are intent on keeping the Wednesday meeting focused on Raymond Street, there are two more planned to look at the effects from Garden Street changes. An in-person listening session is planned for Nov. 29, and a virtual one is planned for Dec. 13, said Elise Harmon-Freeman, a Traffic, Parking & Transportation spokesperson, on Tuesday.

The bike lanes are required by a Cycling Safety Ordinance, but they have led to controversy and complaints for costing parking spaces and upsetting traffic patterns from Cambridge Street in Mid-Cambridge (starting in 2017, two years before passage of the law) to more recent rollouts on Massachusetts Avenue in North Cambridge. Closing Memorial Drive in the Riverside neighborhood to car traffic in favor of Saturday recreation has caused similar complaints.

In each case, a majority of comments have come from bicyclists pleased that they are in less danger as they help achieve the council’s goal of getting more cars off city streets. Monday’s meeting drew some 40 comments about Garden Street, and at least 25 favored the change.

The worst of the traffic snarls tend to be short-lived, several people said Monday. Drivers need to encounter a jam only once before they know to avoid the problem, and online maps and direction apps may take a month or more to be updated.

The changes on Garden Street between West Cambridge and Neighborhood 9 arrived Oct. 28, with the addition of two-way bike lanes on the stretch between Huron and Concord avenues. For cars, Garden Street was suddenly a one-way heading eastbound toward Harvard Square and Cambridge Common.

During public comment, Melanie Rucinski said her home’s windows provided a good view on how the situation had developed. “I saw the increased traffic on Concord Avenue last week and I also saw that even just today the traffic was already reduced relative to the days immediately following the changes to Garden Street,” Rucinski said.

Despite four community meetings and an open house before the Garden Street changes, as well as 13 official emails and a dedicated webpage, there were still residents taken by surprise. “And they live right in that neighborhood,” McGovern said. “This is just another example of how we have to think about how we communicate with people. Are we mailing things just to abutters, which is a pretty slim legal definition of what an abutter is? Or are we spreading that out to everybody who might be impacted?”

Trucks diverted from Garden Streets reveal another problem. A few people told of watching trucks and buses venture down roads that can’t handle their size, including Walker Street, and adding to traffic problems as they need to reverse course.

“What really surprised me was the the complete lack of signage. There’s no indication that something’s changed,” Zondervan said of his visits to Garden Street. “In other cities I’ve seen where there’s a temporary sign that alerts drivers to what’s happening. I agree that the changes are great, but the way the project has been rolled out and the way that communication has happened, or not happened, is not good.”

“And it really shouldn’t come to the point where every single time we have one of these projects, there has to be a policy order,” Zondervan said.

With bike lanes and traffic changes coming next to Brattle and Hampshire streets, councillors said they wanted to see a more coherent and consistent process put in place for feedback and potential mitigation.

The handling of the Raymond Street meeting has been chaotic. It was referred to several times during the Monday council meeting, when Mayor Sumbul Siddiqui took credit for working with the deputy city manager to schedule it. Yet on Tuesday, the Traffic, Parking & Transportation department initially denied knowledge of it and transferred calls to the City Clerk’s Office, which had to reach out back to transportation staff and the City Manager’s Office to learn details on a meeting no one had shared. The meeting was not posted online in the city calendar.

Yet laminated signs posted on Raymond Street say the meeting is a “community conversation” run by the Traffic, Parking & Transportation department and refers questions to the department’s Stephen Meuse. One of the names attached to the call for a Wednesday meeting was prominent: Raymond Street resident and state Rep. Marjorie Decker.

Despite Toner’s declaration that his order wasn’t about undoing a bike lane, he said he was open to a little change: undoing making that section of Garden Street one-way. “If ultimately it turns out the decision might have been a bad decision,” he said.

“My understanding is that it was mostly to save more parking spots. Believe me, I’ve been fighting for more parking spots,” Toner said. “But if what turns out to be the better solution for the neighborhood is to return it a two-way, I hope we’ll be open to that in five or six months if that’s what the studies show.”