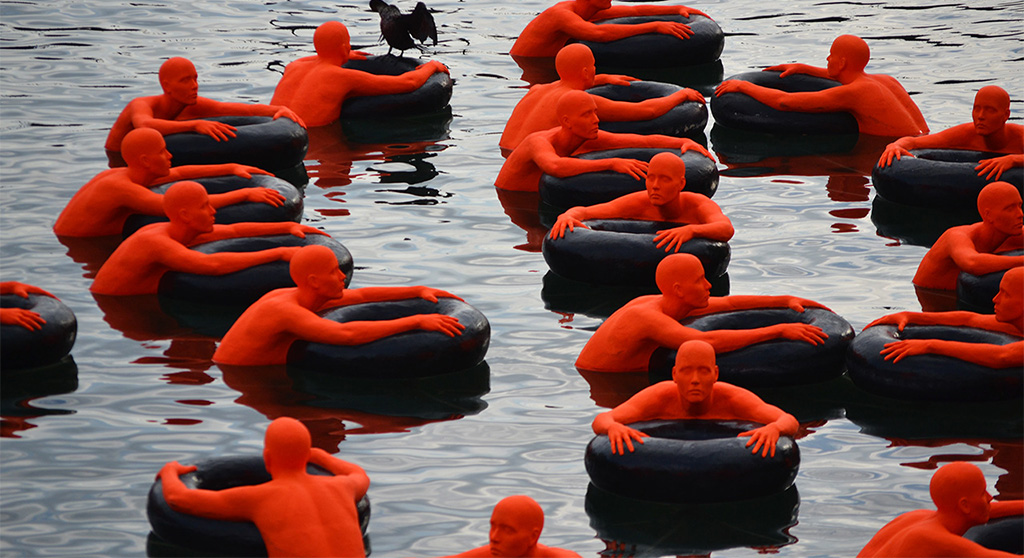 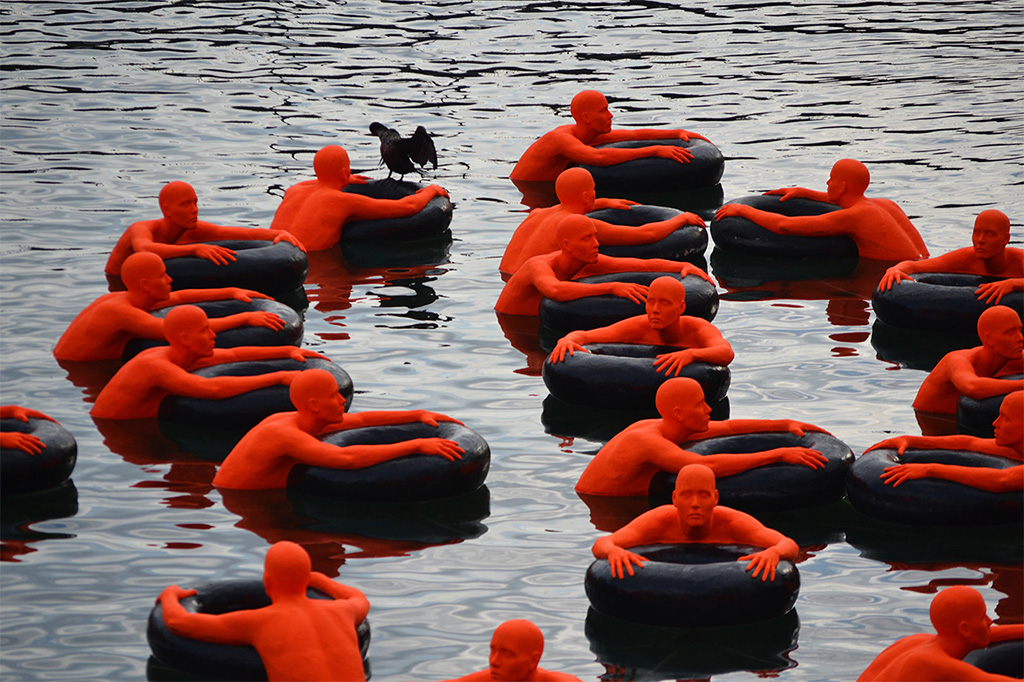 The wide-ranging, 12-artist “Sanctuary City,” the Somerville Museum’s first exhibit since an ambitious construction project, is in its final week exploring the meanings of home and safety through the lens of immigration.

Works are in a variety of mediums, from comic book art to video installations and sculpture, anchored by “SOS (Safety Orange Swimmers),” a series of sculptures by Ann Hirsch and A+J Art+Design that includes striking video of them floating in Boston Harbor.

The scene “triggers an instinct of solidarity [that] that person needs help,” said curator Julia Csekö, a School of the Museum of Fine Arts at Tufts University alum.

Other highlights of the exhibition include a series of photographs from Iaritza Menjivar, an artist of El Salvadoran and Guatemalan descent, and work by Joanna Tam, an artist from Hong Kong. Menjivar’s photographs are imbued with a sad nostalgia; they conjure feelings of communal joy and the sense of duty that comes with being a first-generation American. Tam’s mixed media sculpture, “I Just Want a Home,” combines digitally printed pillows with lamps and vinyl sidings alluding to the Trump administration’s crackdown on immigration and implying an anger that home isn’t as safe as it seems.

Csekö’s curatorial philosophy is inspired by Brazilian educator Paolo Freire’s idea that we learn best through dialogue. It’s about “guiding the public through this dialogue with the artwork, to come to conclusions or to be more curious about it,” Csekö said.

Response to the show has been impressive, she said. After viewing Tam’s “I Just Want a Home,” one older man “felt so angry that he wanted to punch one of the pillows that were on view” – for Csekö, a sign that “the work is really speaking to someone and bringing their attention to something they don’t think about in their daily lives.” Somerville Mayor Katjana Ballantyne’s visit to the exhibition reminded her of traveling alone at age 13 after being orphaned in Greece, and having to negotiate with customs officers upon entering a country. “If you’re an immigrant,” Csekö said of the exhibit, “you immediately start relating to it.”

Csekö’s curatorial work makes full use of the Somerville Museum gallery, which would not at first glance seem conducive to art exhibition. The space includes a large “Bullfinch Staircase,” a beautiful but somewhat awkward feature. (Csekö jokes that the staircase is the space’s largest sculpture.) In her curatorial process, Csekö said she sought “to work with the characteristics of the space” rather than try to hide it. The gallery has several moveable walls, which Csekö said they “kind of Tetris-ed so we could have the space as open as possible.”

Along with an elevator installation as part of the museum’s Access for All campaign, the museum’s revamp includes new wayfinding and paint. “The color scheme is more conducive to the neutrality you need for art viewing,” Csekö said, “but you can’t take away the quirkiness” of the space.

Csekö lauded the Somerville Museum for the Community Curator Grant that supported “Sanctuary City.” The form of grant is “rare, but it shouldn’t be,” Csekö said. As an independent curator, Csekö is consistently looking for new projects and partners, and wishes there were more such programs. “Without a space, without a gallery, without someone to organize the show,” Csekö said, “it’s really hard to be an artist.”

A new Community Curator Grant round opens today and closes Jan. 13. An information session will be held Wednesday at the museum. Information is here.

“Sanctuary City” closes with an event at 5 p.m. Nov. 19, after a final Spanish-language tour of the exhibit from 11 a.m. to noon.