No more towed vehicles during street cleaning? Proposal is on hold with a call to ask the public 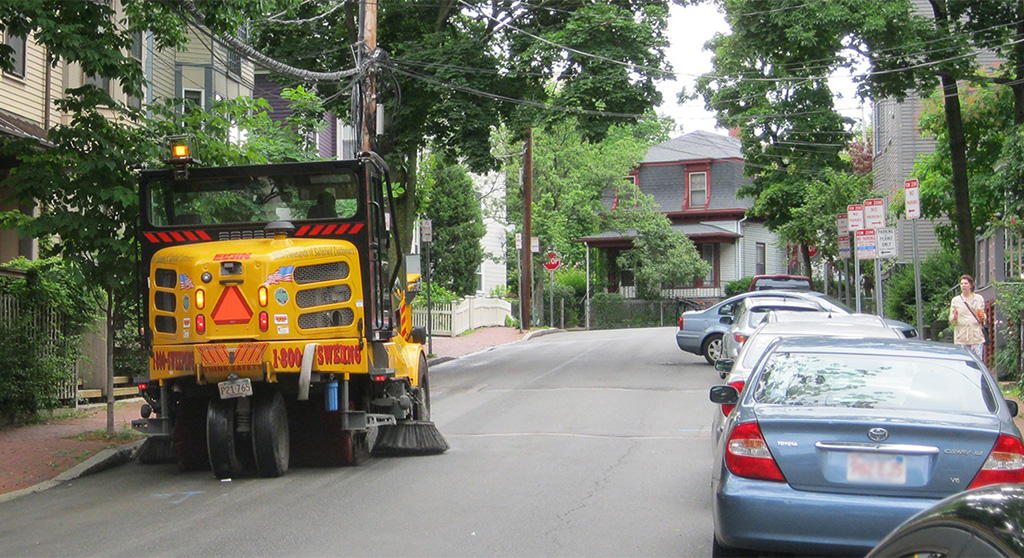 No more towed vehicles during street cleaning? Proposal is on hold with a call to ask the public

A Cambridge sweet sweeper at work. (Photo: City of Cambridge)

A proposal for the city to find ways to street clean without towing cars was stopped Monday for at least a couple of weeks, as a city councillor urged its authors to ensure that the people most affected by the change get asked about it.

While it’s no fun to realize your car was towed to an impound lot and it will cost time and sometimes a lot of money to get it back, “we find it a necessary evil,” said councillor E. Denise Simmons, a resident of The Port neighborhood. “Several of us accept it because of the desire to have our neighborhood as clean as possible. I’ve asked in the past that we have hand sweepers to help keep up with the mountains of debris that accumulate in a very dense neighborhood.”

Street cleanings take place twice a month from April through December, according to a city website, with sweepers preceded by blaring loudspeaker announcements that have become a famous quirk of the city.

“I understand fully, as an environmentalist, the importance of cleaning our streets. It’s not just about cleanliness and appearance. It’s about keeping phosphates out of our water,” said councillor Quinton Zondervan, writer of the motion, on Monday. “We just need to come up with a kinder, gentler way to accomplish our environmental goals without perpetuating injustice.”

Zondervan shared a story of a lower-income constituent who bought a cheap car out of necessity and left it in the wrong place. Impoundment storage fees built daily until “it would cost them more to retrieve their car than to buy another used one,” he said.

Cambridge wouldn’t be the first community to end tows for street cleaning. New Haven, Connecticut, stopped towing in 2020 with its mayor saying there were better ways – in this case, more-expensive tickets – to accomplish the city’s goals. While Cambridge tows immediately upon discovery of a car that will be in the way of the sweepers, its neighbor to the north, Somerville, tows only after repeated offenses, said Patty Nolan, a co-sponsor of Zondervan’s proposal. First come tickets, then a 48-hour boot and finally a tow if the boot isn’t handled in time, she said. Nolan wanted city staff to check with Somerville about the success of this approach.

In addition to the expense and hassle of getting back an impounded car, tow trucks are diesel polluters, Nolan said – all reasons this is the third attempt to end the practice in the past seven years. A 2015 policy order was written by Simmons; a 2017 version was written by Tim Toomey, a former councillor often identified with East Cambridge. Each time, city staff opposed the idea.

That the new policy order asks for another staff opinion without calling specifically for community outreach didn’t sit right with Simmons, though.

“It’s not going to impact people in the more affluent neighborhoods, because they have off-street parking,” Simmons said. “Nowhere in this policy order does it say let’s have a conversation with [the affected] neighborhood.” She used her “charter right” to stop conversation, saying she wanted her colleagues to rewrite the order to include more citizen participation.

A review of Simmons’ order in 2015 shows it also did not include citizen participation.

The possibility of ending towing was an afterthought on the 2017 order, which asked for a committee hearing on how to warn drivers electronically that their vehicle had been towed, and where it was taken. (The committee hearing never happened.) Now there’s an app for that – a mechanical engineer named Steve Trambert introduced a Cambridge Tow Monitor tool in May 2020 that he said searches a city database three times a day to alert you by text or email “if your car is towed and you don’t realize it.”

The city has a tool that may be more useful for some: Reminders of street cleaning that can be emailed, texted, sent to a calendar and more. (It’s under the “Find Your Street Sweeping Schedule” header at cambridgema.gov/services/streetcleaning.)

The next council meeting is a roundtable on open space planning and programming, but tows are due to return to the agenda for the Dec. 19 meeting.