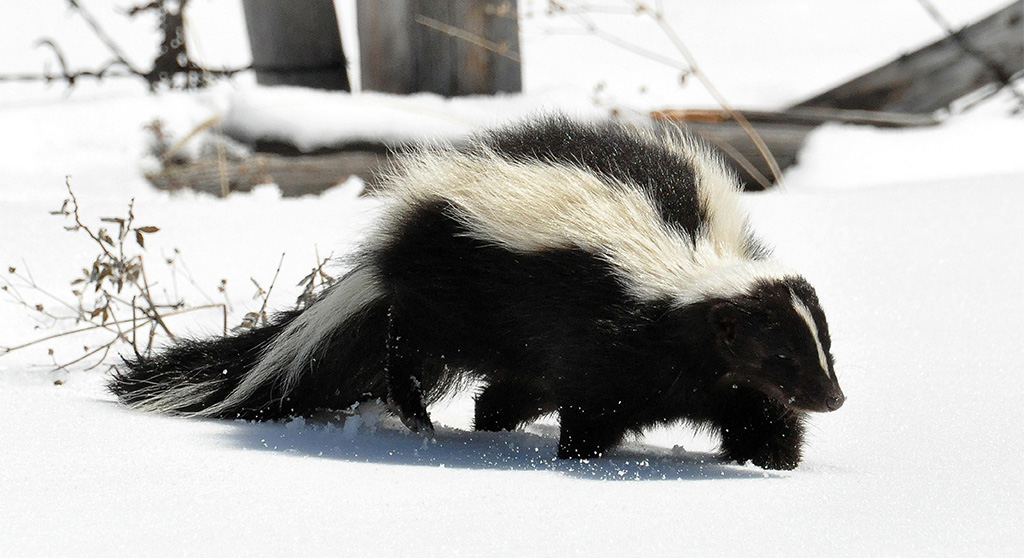 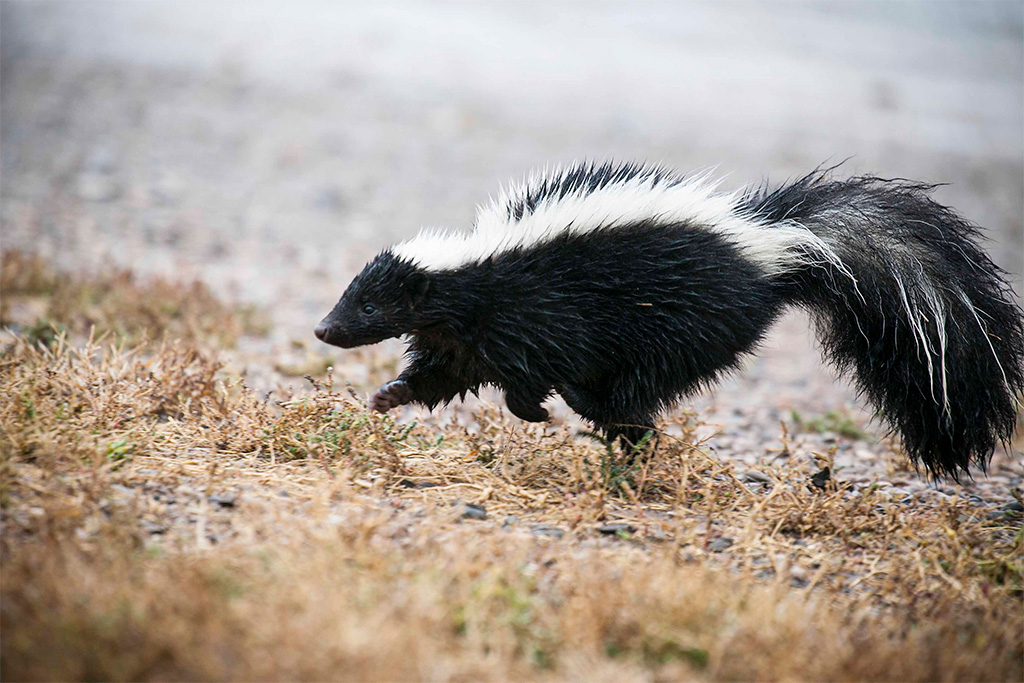 A striped skunk hurries through the rain. (Photo: K. Theule/USFWS)

Similar in size to a house cat, the striped skunk (Mephitus mephitis) is found throughout most of Massachusetts (except some islands near the Cape). With a black coat and a white stripe down the neck that splits into two stripes on the back, these critters are unmistakable. The stripes down the back are unique for each individual and can help in identification (should you ever desire to identify a skunk). They have a bushy tail and short legs, so they waddle when they walk and are poor climbers. They have long claws, though, that are suitable for digging grubs and insects, their favorite foods.

During the fall, skunks eat as much as they can to fatten up for the winter ahead. When the temperatures drop, skunks use their long claws to dig a fresh burrow for winter or find an empty den made by another animal. Usually, a winter den contains several females guarded by one male who all snuggle together for warmth. Striped skunks enter a state of torpor in the winter. Intermittently, the skunk’s body temperature drops and its metabolism slows so it uses less of its stored fat. When the temperature is above 30 degrees Fahrenheit, skunks may become active and step out at night to hunt for food. When temperature are below freezing, however, skunks sleep to conserve energy. But winter takes its toll on skunks, and can cost one more than half its body weight.

Skunks are nearsighted and can see clearly for only a few feet, but their sense of smell is excellent. They are nocturnal, and hunt for grubs and beetles, crickets and spiders, eggs and nuts and fallen fruit, garbage and birdseed. They will also kill and eat mice and small rats, and during the 1800s, farmers sometimes kept skunks in barns to kill them. They forage mostly by digging, though. If you see a single, small hole in your yard, you may have had a skunk visitor at night.

By mid-February, skunks sense that winter is ending. Males and females mate and go their separate ways. The female looks for a place to raise her young. She might dig a den, crawl inside a hollow log or find a suitable spot underneath a porch. She lines the nest with leaves and grass, and in late April or May gives birth to four to six hairless, shut-eyed babies, each weighing less than an ounce. The mother becomes fiercely protective and will not allow males or potential predators near her young. If she senses danger, the mother moves her family to a new den. 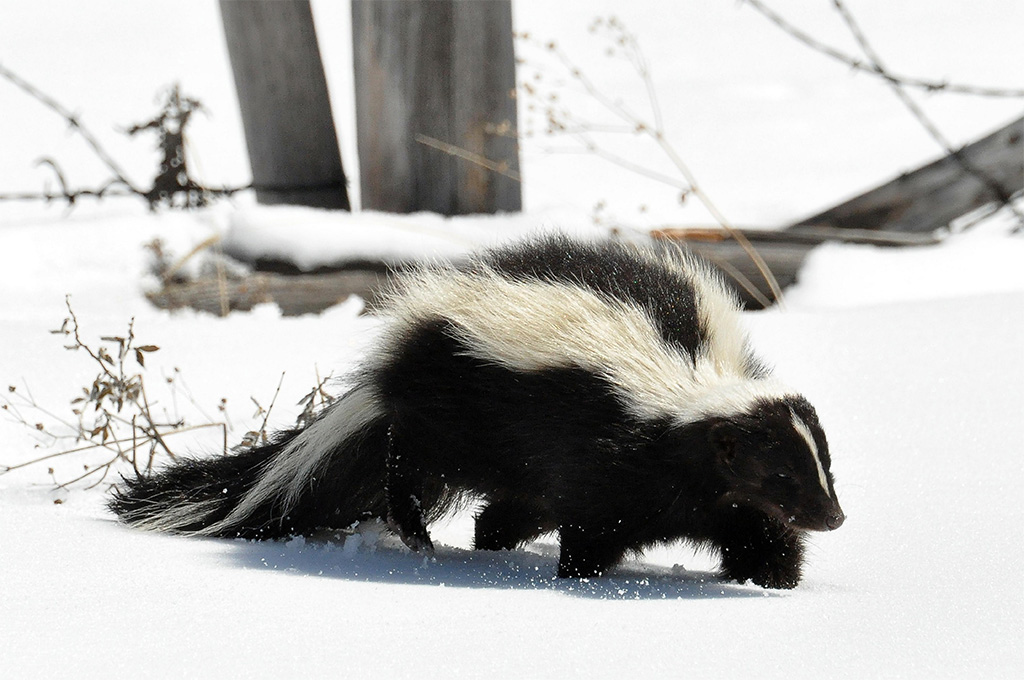 A striped skunk wades through the snow. (Photo: Dan and Lin Dzurisin via Flickr)

When the skunk babies (called kits) are about 6 weeks old, the mother takes them out into the world. She teaches the young how to catch caterpillars, find bird eggs and dig for grubs, among other things. The young skunks are ready to leave home by August. Young male skunks find a new territory, while females may stay with their mother for their first year. Skunks live alone until winter, when groups may den together for warmth. Skunks are nomadic most of the year and sleep wherever they end up in their territory – in tall grasses, under shrubs or under porches. They use dens only in the winter or when raising babies.

Skunks are active at dawn and dusk as well as at night. But females with youngsters are sometimes out during the day because predators tend to attack the young at night. Therefore, the female stays with the youngsters at night, and must leave the den during the daylight hours to forage for food. Once the babies are weaned, the skunks become active at night again. Watch what happens when a bicyclist in Canada encounters an inquisitive skunk family. 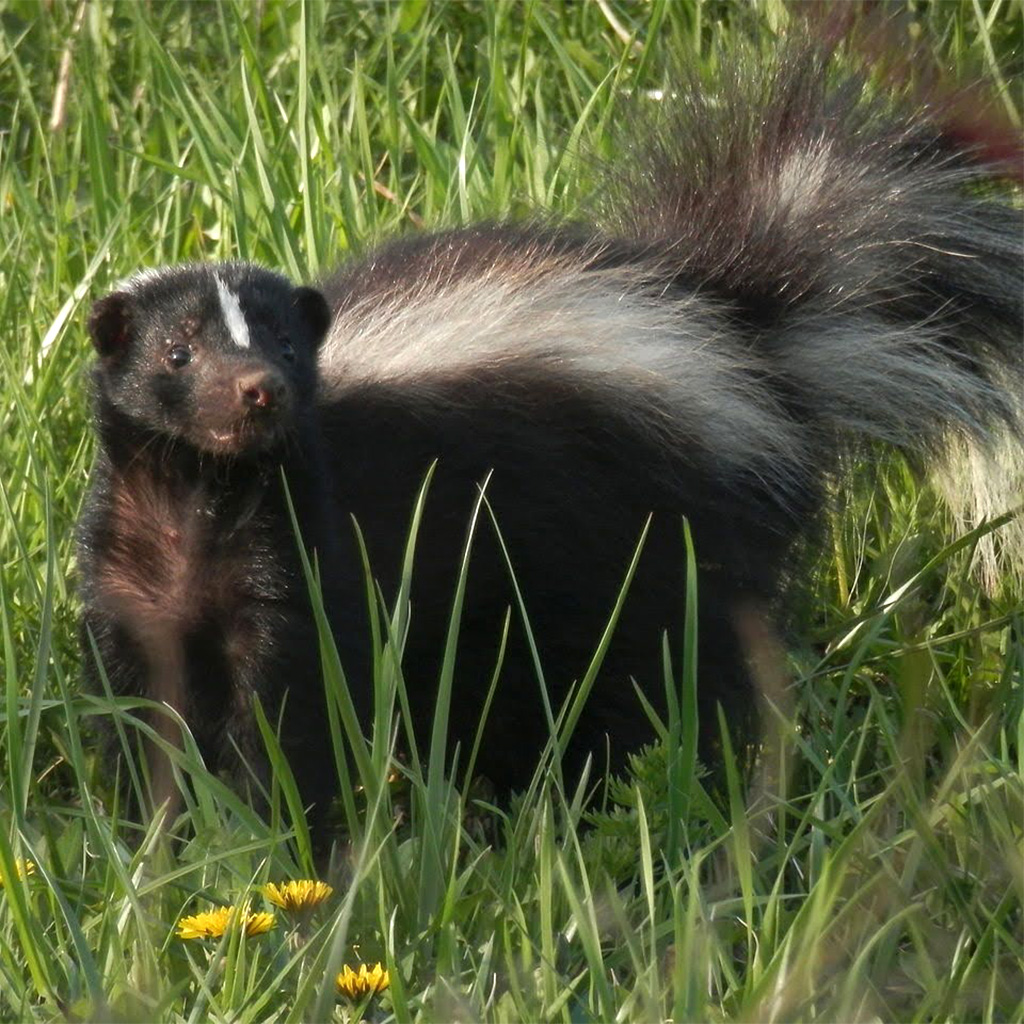 The word “skunk” comes from the Algonquin language family. In Mohegan it’s “skonks”; in Lenape, “škakw”; in Wampanoag, “squnck”; and in Abenaki “segankw” – which literally means “urinating fox.”

Most mammals have brown or gray fur that helps camouflage them during the day; a skunk doesn’t need camouflage. Its black-and-white fur warns others to stay away. When a skunk can’t avoid danger, it hisses, grunts and stamps its feet. If the predator doesn’t heed this warning, the skunk raises its tail, turns its back to the predator and fires liquid musk from a pair of anal glands on its rear. Skunks can direct a stream at targets 10 feet away. This musk not only stinks, but burns the eyes and nose. The predator is temporarily blinded, so the skunk can make a hasty getaway. Skunks spray only when they feel threatened. Inexperienced young skunks are more likely to spray than older, wiser skunks, but since you probably cannot tell a skunk’s wisdom level by glancing at it, your best bet is to back away if you encounter one. Other mammals, such as otters, raccoons, foxes and dogs use their musk to mark their territory or to attract mates; only skunks use musk as a defense. 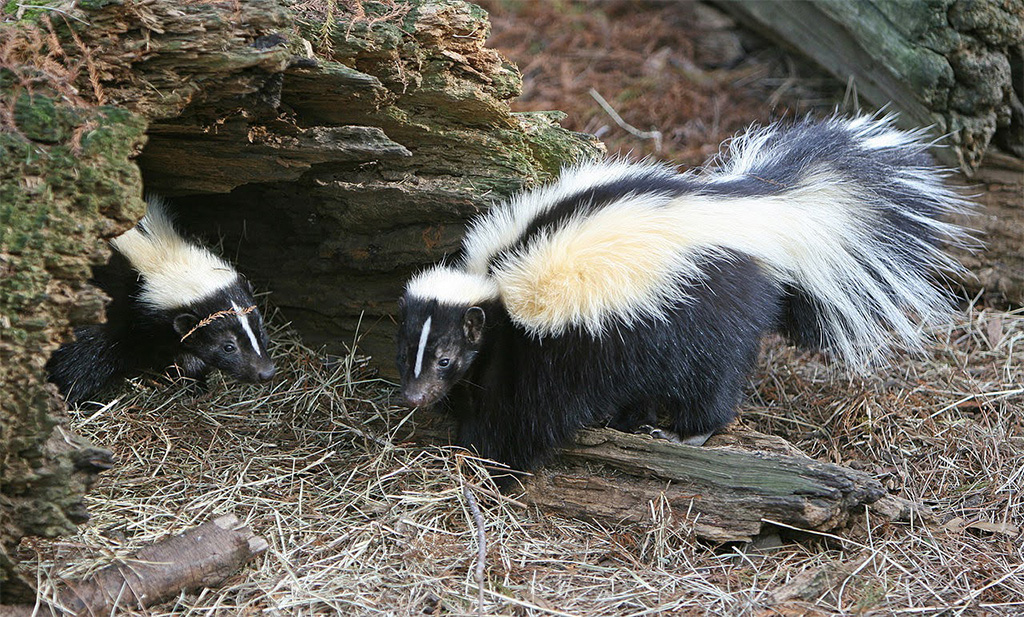 A pair of skunks near their den. (Photo: Tom Friedel via Wikimedia commons)

People in the Americas always have had strong opinions about skunks. In 1759 and 1760, an English clergyman, Andrew Burnaby, traveled from Virginia to Massachusetts, recording his observations. His record of a skunk (which he calls a “polecat” based on its similarity to a ferretlike critter in England) follows: “There is a species of polecat in this part of America, which is commonly called a skunk. This animal, when pursued, or assailed by its enemy, ejects its urine; which emits such a fetid and insupportable stench, as almost to stifle and suffocate whatever is within the reach of it.”

Always and everywhere in evil repute and bad odor, hunted, trapped, and killed, a pest and a fur-bearer, it is a wonder that the skunk is not exterminated, and that he is not even uncommon … Patches of neatly inverted turf in a grub-infested pasture tell those who know his ways that the skunk has been doing the farmer good service here … But when you come upon the empty shells of a raided partridge nest, your sportsman’s wrath is enkindled against him for forestalling your gun. Yet who shall say that you had a better right to the partridges than he to the eggs?

Urban skunks are peaceful and tend to mind their own business. As long as we do not threaten them, they will live peacefully nearby, perhaps letting us watch from afar their maternal antics in the summer months. If you should find one living under your porch, don’t worry. The nomadic skunk will be on its way again very soon.